Well it looked a lot closer on the map. Hello again and welcome back to the Away We Go's Geocaching Adventures Blog.

After working six days a week since December, work finally gave me a 4-day weekend off. YAY! The other half of the "We" still had to work on Thursday and a few hours Friday morning. Trying to figure out where to go on this long weekend, Plan A was San Antonio and the Riverwalk. Plan B was Big Spring and the historic Settles Hotel. Both of those are close enough that you don't really need the "extra" day. Then I remembered something that's been on the radar for many years! MINGO!

Plan C was only a 9 hour drive away! Easy right? MINGO is the oldest still active Geocache in the world! With the code GC30, it was hidden on May 11, 2000 and located in NW Kansas. As of this writing, it has been found 5,721 times and over 2100 favorite points. It ranks up there on every Geocachers bucket list along with visiting Geocaching HQ or attending a GeoWoodstock. 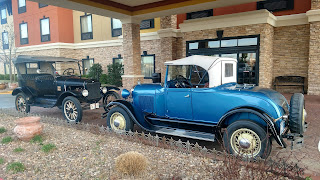 So back to Friday. After working a few hours in the morning, Candy returned home and we loaded up the car. Heading east on I-20 into Odessa, stopping for lunch at our favorite Greek restaurant Pop & Pita's and then a quick drive through at Starbucks. From there we headed north. The plans were to stay overnight in Amarillo, Texas. Normally on our road trips, we're spontaneous and don't make reservations anywhere. But this time I did. 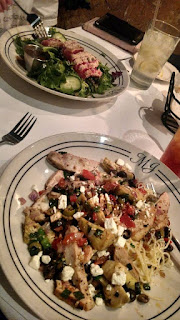 We arrived at the hotel around 5:00 pm Friday evening. Probably would have driven further if we didn't already have the hotel booked. But on the positive side we found this great Italian restaurant called Macaroni Joe's and had a wonderfully delicious dinner. Candy had a Mahi Tuna Salad and I ordered what was called the Confetti Spaghetti. It was so good that I had to order the tiramisu for dessert even though I was already stuffed! And that was the BEST tiramisu I've ever eaten.

There were several items on the menu I wanted to try, including the turtle cheesecake. I almost ordered another dessert to go, but figured we'll run up to Kansas and back to Amarillo in time for dinner Saturday night. But as you'll read in a few minutes, that wasn't going to happen.

So back to the hotel to relax in the Jacuzzi for the evening. The only Geocache we found on Friday was right next to the hotel when I took GeoDog Max for a walk by the pond (GC48KA2). 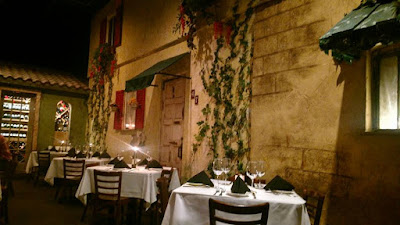 Saturday was a long day and a long drive. Mingo looked so much closer on the map! I had spent several hours looking up caches to find going up and a different route coming back. Looking up historical spots, cool caches, and picking up needed counties in North Texas, Oklahoma, and Kansas. I had 89 caches on the "to find" list!

Hitting the road Saturday morning, we headed for our first stop at a roadside picnic area and a quick cache for a new county (GC15NN0). About 30 minutes later in another new county, I stop for a cemetery cache (GC5P1T5). Spending too long and about 10 minutes looking, I had to walk away with a DNF. By this time it was about 10:30 and I realize that we still had almost 5 hours of driving to get to NW Kansas! Time to skip all the counties and get to goal! MINGO!

Taking some county roads to get back to US-83 northbound and now we're making up some time. For a little while anyway. Until we hit the Oklahoma State Line! Speed limits drop from 75 MPH in Texas to 65 MPH in Oklahoma and Kansas. We're out in the middle of farm land for hours and stuck behind this oversized flatbed 18-wheeler doing 63-65 MPH! And this highway is busier than I ever thought and passing was nearly impossible. There was one spot in Oklahoma that was slightly hilly and made for a passing zone. Finally I was able to get around it!

But several miles later I spotted a ranch with cattle and one large bison standing out front. Visually it made for a great photo and Candy had never seen a real bison before. I pulled over and made a u-turn to get a picture. It turned out to be a very realistic looking statue of a bison! AND to make matters worse the oversized 18-wheeler passed us back and was out in front again! And again we're stuck doing 63-65 MPH for miles on end. And the landscape is flat and no more passing zones. We even made a quick fuel and bathroom stop and caught back up to it in no time. After another hour we decided to stop for a late lunch and be done with it.

FINALLY after caching for almost 11 years, we make it up to NW Kansas to find Geocache # GC30! Funny thing is that it is right off the exit of I-70. As a truck driver I probably drove by here several times. Anyway we find MINGO and three other caches right there at that exit. (GC598PW, GC4K4QN, GC559M6) There where some others in the area on my list, but it was late afternoon and we still had a long drive back to Amarillo! 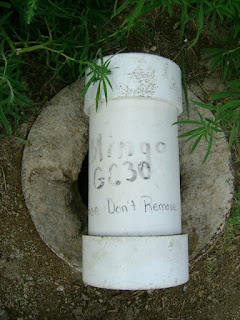 By the time we made it back to our hotel in Amarillo, TX, it was 9:30 PM. A long day, a long drive, a goal accomplished, and one item checked off the bucket list! YAY!

After a good nights sleep and a much shorter drive ahead of us this morning, we make time to find some highlighted caches on our list around Amarillo. The first Geocache (GC2MNMV) was in the downtown area at the old AT&T building. On the wall by the entry door is something you don't see anymore: an old phone with a cord attached to the handset. The phone is no longer used as the door has been modernized with an electric ID swipe for the employees to unlock the door. 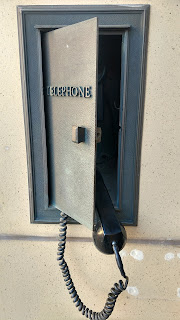 Next on the list was the old Summit Elementary School building GC1EQHM). Originally built in 1928, with a west addition added in the 1950's, the school closed it's doors in 1972. There had been rumors and urban legends of the old school being haunted. The most common story was that a janitor murdered at least 6 students and put them into the boiler. Their spirits still roam the halls at night. Numerous people over the years have been caught breaking in and trespassing. Recently purchased by the Summit Baptist Church and slowly been updated and restored. They claim they have not seen any signs of paranormal activity. 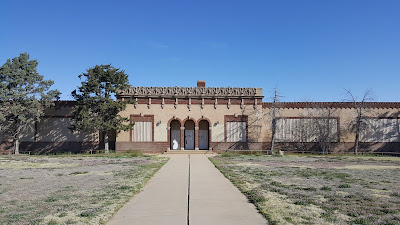 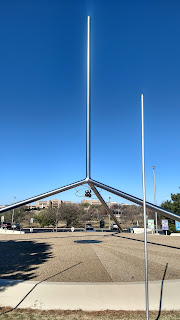 Driving further west along the historic Route 66, we arrive at the Helium Monument (GCG4YR) for a virtual cache. This monument was erected in 1968 to commemorate the 100th anniversary of the discovery of helium on the sun. There were also 4 time capsules buried underneath. This first was opened in 1998 and the last to be opened in the year 2968! I can't tell you the years the other two would be opened because then you'd have one of the answers for the virtual.

Furthering the history of Helium in the area and that brings us to our next two caches GC1KJXX and GC13P2Y. In 1928 a 50,000-acre underground helium-bearing natural gas structure known as the Cliffside Field was discovered near Amarillo. In 1934, the United States Bureau of Mines completed negotiations for the Cliffside Helium Field and opened the Amarillo Helium Plant. For a number of years the plant at Amarillo was the sole producer of commercial helium in the world. Natural gas containing helium was piped from Cliffside Field to the Amarillo Helium Plant where the extraction of the helium from the natural gas took place.

After WWII, the need for helium declined and the Amarillo plant ceased producing helium and was only used for research during the cold war era. Scientific research led to breakthroughs in the use of helium in laser technology, satellites, and telecommunications. The abandoned plant was declared a historical site in 1966 and sold to a private owner in 2007. 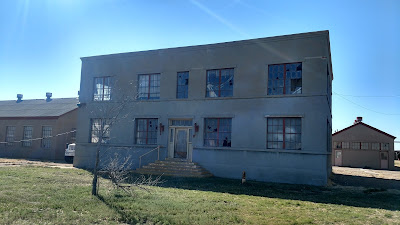 Our last Geocache before heading south towards home was the Hub Cap Post (GCYBZX). Just a unique sign on the edge of someones property pointing towards different cities and a collection of stray hub caps. 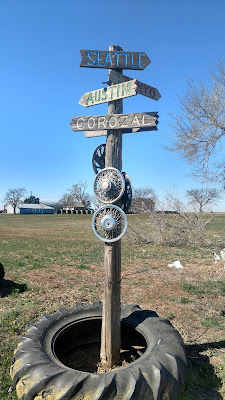 That was it for this long weekend. A long drive of 1301 miles later and signing the log of the oldest cache! What a drive...
Posted by Mark at 10:39 PM