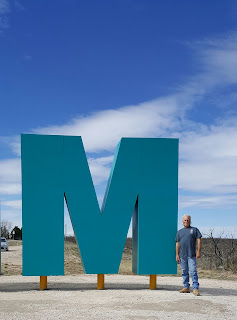 WORK WORK WORK WORK WORK!!! That necessary evil keeps getting in the way of our fun hobby! For the past 2 months or more, I've had to work 6 days a week. Including drive time that's 70+ hours a week! That doesn't leave much time for Geocaching and sight seeing!

Browsing through the cache listings for events and other recent hides, I discovered a yet un-found cache up in Hobbs, NM that has been there a week. Knowing that it is difficult to get motivated in the morning when you only have one day to sleep in, I contacted a co-worker (Noerjr) to see if he wanted to go caching too. He agreed and now we have no excuses but to get going out the door.

Looking up other caches of interest in Hobbs and along the way there, I discovered another yet un-found cache between Seminole and Hobbs along US-62.

So we drove over to Odessa and met up with Noerjr at Starbucks. After grabbing a couple coffee's, we drove off heading up US-385. An hour later we were on US-62 westbound approaching the roadside picnic area and rest stop. Quickly finding the cache (GC70TG1) and the nice clean log sheet! WOHOO a FTF!! (First to Find)

Our next stop was at the Gateway Arch New Mexico Style (GC3A6RN)! Another quick roadside park and grab, but also a photo opp for the Welcome to New Mexico sign. 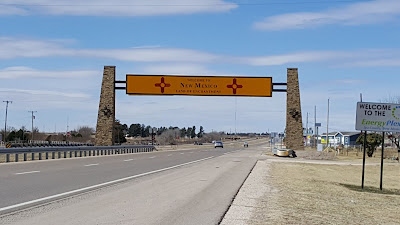 Then a couple miles later, we entered the town of Hobbs, NM. You know I think New Mexico must be called the "Big Sign" state! As we entered Hobbs, we were also greeted with another big sign. Here we found two caches "Flea Bag Inn" (GC48M83), a travel bug hotel cache, and the "Old Wood Windmill" cache (GC42QJ2). This also gave me the opportunity to finally drop off a Travel Bug which I've been holding since last November. I feel guilty for hanging on to it for so long, but haven't had the chance to place it in a cache. 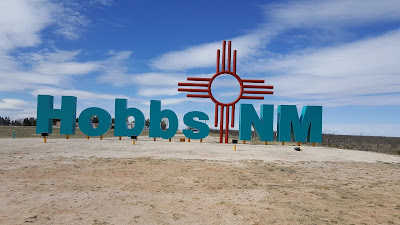 Our next stop was for the newly placed "Gold Junction" cache (GC70VYV). A nicely hidden cache for another new cacher in the Hobbs area. I'm sometimes a little hesitant looking for a new cache placed by a cacher with few finds. (only 17 for this one) Sometimes the coordinates may be WAAAYYY off or the container not even there! But this one was a good hide. Well done Boogieman77!

Then up the road to a 6-stage Multi-Cache (GC1X8ZF) at the cemetery. This one was a lot of fun. Started at the front, then to the back, up near the front, you get the idea! Criss-crossing back and forth across the cemetery looking at graves to get hints to the next set of coords. Rated a difficulty of 5, but a fun cache.

Next was another Multi-Cache called "Why Did the Chicken Cross the Road?" (GC3QKHK). Although the 10' chicken statue was no longer there, we did manage to find the egg at the end.

After some fun, it was time for some history. The next cache was called "Ye Old Slammer" (GC1WWNC). This was the Old City Jail from the 1930's. Couldn't see much as it was all boarded up. Too bad. They should make this into a museum or something. 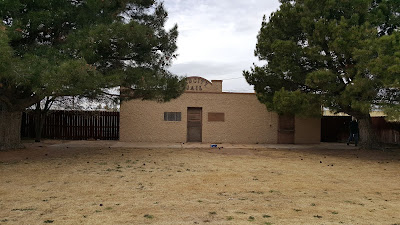 One more cache in town before heading back and we made it a virtual cache (GC3DAE). Located at the old oil well from the 1920's celebrating SW New Mexico and the Permian Basin economy. There's also another historic feature here, but I can't say because that would give away the answer required to claim a find. And that would be cheating! HAHA! 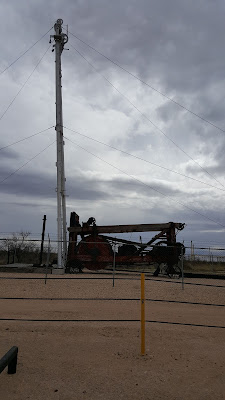 Two more quick roadside park and grab caches on the way back to Odessa (GC24RE6, GC1YEFJ) and that was it for the day. It wasn't a big day for caching with a lot of sites, but it was a much needed break from WORK WORK WORK WORK WORK!! And had a great time with Noerjr who previously only had 1 find and ends his second caching day with 12! Way to go!!

Hopefully soon I'll be back to a 5-day work week and we'll be caching on a regular basis again! Until next time...
Posted by Mark at 8:35 PM