Hello again. Today's Geocaching Adventure takes us to several cemeteries, ghost towns, a Vietnam war memorial, and some more sights around West Texas. So we're glad you stopped by. So buckle up and let's begin.

After a Starbucks stop in Odessa, we head just north to a small town called Gardendale for our next two caches GC4KKDB and GC34VGJ. The second one brought us to this Mystery Mansion. According to the cache page, a man began building this house in 1950 but never finished it. For a long time he lived in a small travel trailer along side it. Inside the house are stairs that lead up to nowhere, doors that open to brick walls. Kinda reminds me of the Winchester Mansion in California. A mystery for sure. 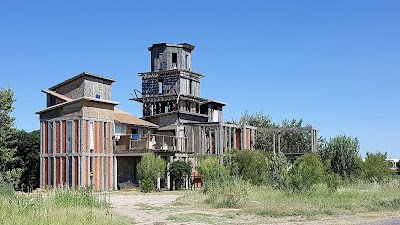 Heading back down between Odessa and Midland near the airport is a virtual cache. For those of you reading about our adventures who are not familiar with Geocaching, a virtual cache is one that doesn't have an actual container with a log sheet. In order to claim a find you must visit the cache location and find the required answers listed within the cache description.

This particular virtual Geocache (GCE131) brings us to a Vietnam War Memorial honoring the Odessa and Midland residences who gave all for the freedom of others. 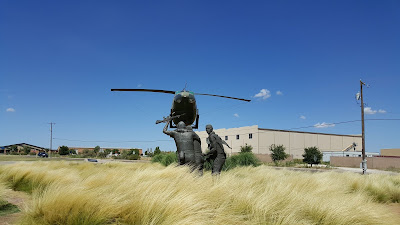 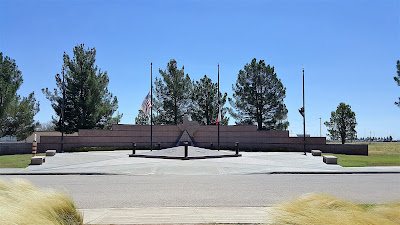 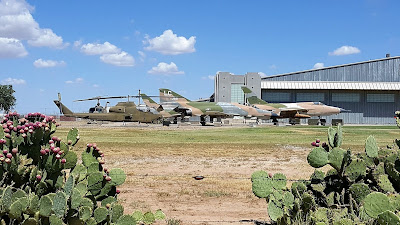 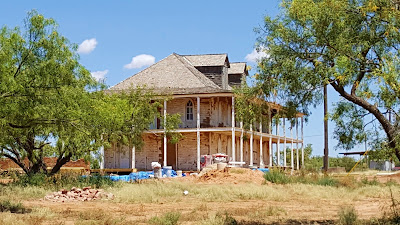 Back on the I-20 highway westbound, we make it down the road to Stanton, TX and our next Geocache (GC1MZF0). With the purpose of founding a monastery and a German Catholic Colony, Carmelite Monks, in 1881, began the first catholic church between Fort Worth and El Paso. The adobe and brick monastery was completed in 1884, and St. Joseph's Church in 1885. Sisters of divine providence opened a short-lived school, 1887; reopened, 1894, by Sisters of Mercy. In 1897, Carmelite Monks disbanded and sold property to Sisters of Mercy, who operated a convent and academy until abandonment after a tornado severely damaged the facilities on June 11, 1938. All that remains are a dormitory, ruins of other buildings, and the cemetery.

While passing through the center of Stanton, we passed by what looked like an old Ford dealership. I didn't see a parking lot full of cars for sale, just an old building which appeared to be a showroom and offices. Because of the glare on the plate glass windows it was hard to get any decent photos, but there was an old Model A sedan and a 49 Ford along with a new model. 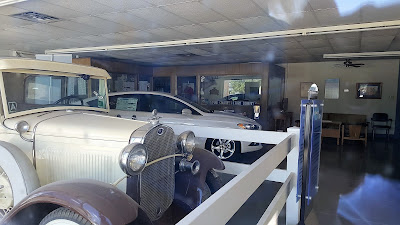 Driving south out of Stanton, we head to Evergreen Cemetery on the southern end of town for our next couple of caches. (GC2V38B & GC31QVK) I don't know much on the history of this cemetery, but one of the oldest headstones I saw was that of Pvt Julius F Leisering who died on September 14, 1890. 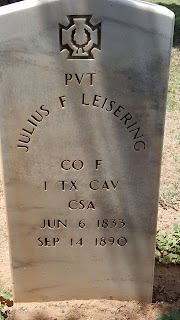 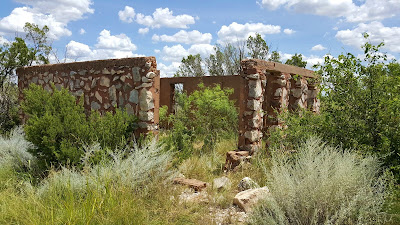 A few more caches later and we're driving south from Big Spring, TX on US-87 to our next Geocache (GC1JHNM). Another cool thing about Geocaching is even though you've found a great spot to hide a cache, you may not know its history. But eventually you may come across another Geocacher who does know the story behind your mystery.

That's the case with our next cache. The CO had driven by this place several times and even stopped to look for clues. But could not find out what this place was. However it was still interesting enough to hide a cache here and called it "History's Mysteries." Well five years later another cacher was here to make the find and had the story from a cousin who grew up and still lives down the road. At one time this road and Overton road were the San Angelo highway. The building was a gas station. 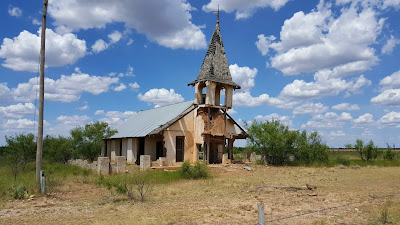 A few miles further south and east we find our next two Geocaches (GC3QB8Z & GC1JHMN) for another Texas ghost town. Hyman was on Farm Road 2183 twenty-seven miles southwest of Colorado City in southwestern Mitchell County. It was the site of the last school district to be organized in the county, in 1923 and was named after Mr. and Mrs. Harry Hyman, who donated the school lot. By 1930 eighty students were enrolled from the district, which covered eighty-four square miles. A post office was established at the community in September 1924 with Sarah M. Hyman as postmistress; it stayed open until around 1947, when the town reported two businesses and fifty residents. In 1945 the local school district was broken up and divided by the Colorado City, Westbrook, and Forsan schools. Hyman was the site of a radio navigation station for military aviation. The station was decommissioned with the closing of Webb Air Force Base in Big Spring. In 2000 three families still lived in the community, and the abandoned navigation station, a cemetery, and the ruins of a church remained at the Hyman townsite. 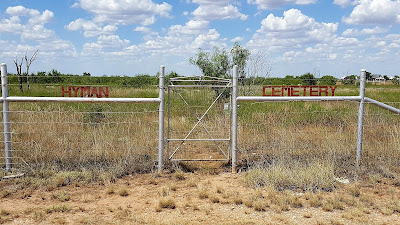 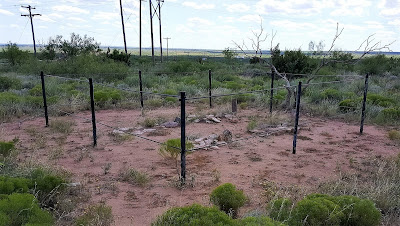 While the last cemetery may be somewhat forgotten and neglected, this next one has an interesting story behind it. Our next Geocache (GC29137) took us to an unknown cemetery of unknown graves. Not too many feet to the right of this photo is an oil well and many more in the surrounding field. The oil field workers discovered these graves, took some of their piping and created a makeshift fence. They try to keep the site maintained as they come to inspect the oil pumps and pipelines.

The story of the graves is that an old stagecoach trail passed through this area. The two theories are a woman and three children or a woman, two children and a dog. Also unknown is how they died. Could it have been Comanche Indians, stagecoach robbers, or perhaps they tried a homestead but failed. We may never know.


Our final two Geocaches (GC1J0D5 & GC1H3ZW) for the day brought us to the Coahoma Cemetery. Coahoma, Texas, on I-20 ten miles northeast of Big Spring in east central Howard County, probably took its name from Coahoma County, Mississippi, which in turn derived its name from an Indian word meaning "red panther." Early names for the community included Signal Mountain and Signal Mountain Station, after a nearby hill. 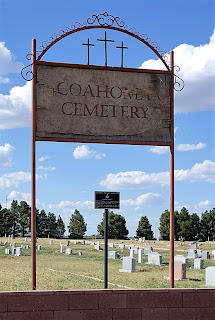 After the 1881 arrival of the Texas and Pacific Railway in the area, Coahoma grew into a retail trade center and shipping point. Its residents built their first school in 1891, and Gertrude McIntyre was the first teacher. By the time its second school was built in 1904, the town had a post office. Machinery and oilfield supplies became the most important goods distributed from Coahoma after the major oil strike of 1926. In 1928 the town had 600 residents, and its school district served 205 pupils. Between 1936 and 1956 the community's population rose from 620 to 802 and the number of commercially rated businesses went from eighteen to twenty-three. In 1960 the population was reported as 1,239, and in 1970 it was 2,000. In 1980 Coahoma had 1,069 residents. At that time the community also had twenty-four businesses, a bank, and a post office. In the early 1990s it was an incorporated community with a population of 1,157 and forty-eight rated businesses. In 2000 Coahoma had forty-eight businesses and a population of 932.

If you spend time looking through this small cemetary you might run accross one of its notorious residents. Texas outlaw Rube Boyce. He was well known in the region as a rustler and robber and was known to have killed at least three men. The El Paso stage followed the Northern San Antonio to El Paso National Road through Fredericksburg, Mason, Menard, and on to El Paso. The route crossed the San Saba River at Peg Leg Crossing, a few miles north of' London. Rube Boyce was adept, as well as habitual, at stopping and robbing the stage in a gap just west of Peg Leg Crossing. A stage driver on that run suggested that a scheduled stop be established in the gap to allow for Boyce's robberies so that the driver could keep the stage on schedule. As mentioned, stage robbing was not his only vice. 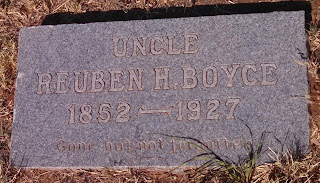 Well that was our Geocaching Adventure for today. Lot's of interesting sites and history learned for today. We hope you're enjoying our stories and will see you back soon.
Posted by Mark at 7:35 AM