Exploring the History of Gilliland, Texas and is it a Ghost Town

Hello and welcome back to another edition of AwayWeGo's Geocaching Adventures. This is one of those blog posts that is a little different than my usual roadtrip stories. After leaving North Carolina, my next construction project brought me to this little town of Gilliland, Texas. For the two months I was here, I got to explore some of the area and take a look into Gilliland's past through some of the abandoned buildings.
I don't know if I would call this a ghost town or not since at best it reached 120 residents at one time. Now it's down to just 25. But with some of the creepy abandoned buildings, I'll let you decide.
There were no Geocaches here for me to find, but I did manage to hide a few myself to bring other Geocachers to this small community to discover what I've found.
Gilliland is located on Farm Road 1756 some seventy miles southwest of Wichita Falls in north central Knox County. The first Anglo-Saxon to arrive to this area was probably was a surveyor (like myself) named Captain Randolph B. Marcy who was commissioned to look for a suitable site for a wild Indian reservation. In 1870 Indians were making forays taking food or spoils or just pillaging. In 1871 the first settlers, who began arriving in covered wagons seeking new opportunities, called the community Coyote on the land between the north and south forks of the Wichita River. Wagon trains brought families who lived in tents, two room picket houses, wagons, and half-dugouts.
Settlement came in waves by men mostly of European culture until the arrival of a nearby railroad which paved the way for a population explosion. Over the years the area gained a mix of settlers from various locations, including several Norwegian families from Bosque County, who arrived in 1890. Stores, homes, churches and schools sprang up to provide the settlers needs.

The Gilliland school district was established on May 1, 1892, and school began in 1895 with Miss Oma Acker as the first teacher. Over the years several schools were consolidated with the Gilliland district after the now abandoned school building (GC8AN63) was erected in the 1930's. Gilliland's new school featured numerous classrooms, a cafeteria, and a gymnasium that doubled as an auditorium for plays and assemblies. In 1948 its high school was transferred to Munday, leaving Gilliland with only a grade school. It continued until finally closing its doors in 1975.

District judge W. A. Gilliland became the town’s namesake when the opening of a post office in 1907 required an official name. In 1910 Luther Burgess, Jake Cure, and W. A. Cure built a cotton gin just outside of Gilliland. The gin was modernized in 1936 and proved to be highly productive. Leading settlers included O. M. Olson, who operated a post office in his home in 1907; F. B. McGuire, owner of McGuire's General Store; and longtime postmaster J. S. Cook, owner of three businesses between 1926 and 1934.
Gilliland had an estimated population of fifty in 1925. By 1947 it reported 120 residents and four businesses. In 1971 it had three businesses, and from 1971 to 1990 its population was reported as 103. By 2000 the population had dropped to twenty-five.
Today the community consists of the ruins of the 1930 school, grain silos and a few former businesses being reclaimed by nature – although the community center is in good repair and still in use for meetings and a voter polling place.
The Gilliland Cemetery (GC8AN86) is a well kept still in use cemetery with over 330 interments to date. The one grave that stuck out here is for a man named Liberty Justice who died in 1925. I tried researching this man for a few hours but didn't come up with anything but his spouse and children's names. 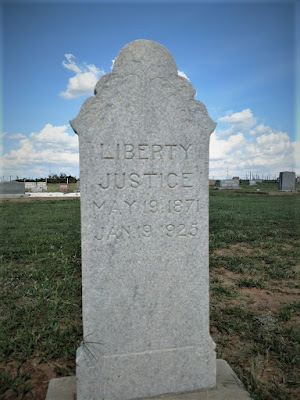 So while working here in Gilliland, I'll be living about 20 miles south in the town of Munday. Over the next few weeks I'll be bringing you stories about of my weekend roadtrips between here and Killeen and all the places I've discovered in between.
I leave you with a few more photos from Gilliland: 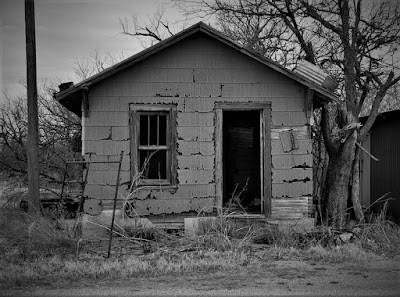 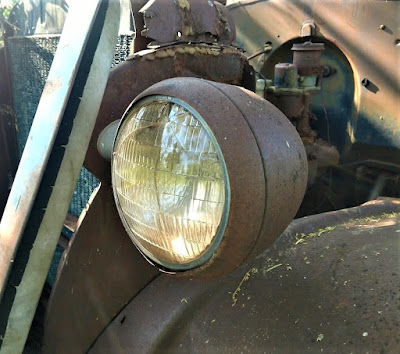