Well our weekend is over and we drove back home along the Texas / Mexico border. Before leaving Eagle Pass, we drove around town checking out some of the historical spots. 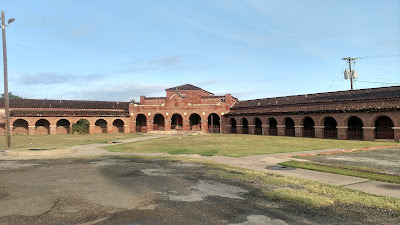 Our first stop was down along the border at Fort Duncan. A temporary post called Camp Eagle Pass was established at the start of the Mexican War in 1846 by Captain Sidney Burbank with Companies A, B, and F of the First United States Infantry. In November 1849, the post was renamed Fort Duncan, honoring Col James Duncan, a hero of the Mexican War. The fort consisted of a storehouse, two magazines, four officers quarters, a stone hospital, in addition to quarters for enlisted men. (The red brick building above was the hospital.)

The fort served as a frontier outpost near the trail of California emigrants; a base of operations against hostile Lipan Apache Indians. In 1851 it became the headquarters of the First Infantry. By 1856 the garrison included units of mounted rifles and first artillery. Abandoned in May 1859, the post was re-garrisoned by Robert E. Lee in March 1860 because of border assaults by Juan N. Cortina, desperado of the area. At the outbreak of the Civil War in 1861, the fort was again abandoned only to be occupied later as "Rio Grande Station", by Confederate forces. 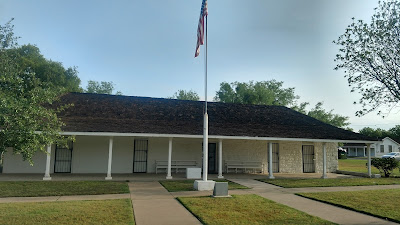 In 1861, Fort Duncan was re-garrisoned by the 9th Infantry and headquarters company of 41st Infantry under Col William R. Shafter. Seminole-Negro Scouts, organized here on August 16, 1870, played a large part in ridding Western Texas of Indians. After 1883, the post declined in importance; known as Camp Eagle Pass.
Fort Duncan played a part in aviation history when the first military cross-country flight, from Fort McIntosh in Laredo, landed here in 1911. Its use as a training camp continued during World War I. Mexican border troubles in 1916 again brought reoccupation. 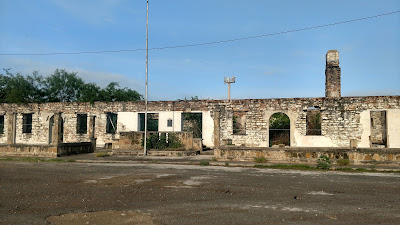 By 1932 the Army abandoned the post. In 1938, the fort property was purchased by the city of Eagle Pass, for use as a Park and Recreation area. The infantry barracks were leased by the Local Council of Boy Scouts.

In 1939 the barracks became the Fort Duncan Country Club and remained as such except during World War II when it was also an officers club for the Eagle Pass Army Air Force Advanced Flying School. 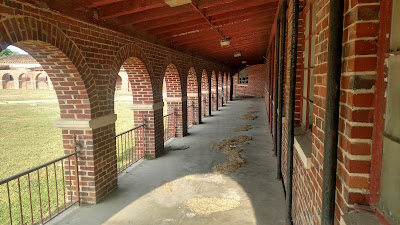 After walking around the fort, we drove north a few blocks to the downtown area looking for the post office. We didn't need the post office, but I had read about an interesting spot on the Find-A-Grave website. This spot, at Rio Grande and Monroe in Eagle Pass, is approximately the site of the first city cemetery here. For some reason, after the 1880's the cemetery was abandoned. It was later developed on and paved over, effectively destroying it. During the construction of a post office nearby in the 1950's, a tombstone was discovered, as well as several graves.

We never did find it though. I wasn't thinking that the current Google search for post office was a different post office from the 1950's. It wasn't until I looked the website again and re-reading the description that we were a few blocks away. Maybe next time passing through we'll find it.

From there we drove over to Shelby Park along the Rio Grande River. The park is mostly used by those leaving their cars on the Texas side and walking across the International Bridge into Piedras Negras. There were also about a half dozen border patrol agents getting ready to launch two airboats for patrol. The photo below looks over into Mexico and the bridge would be located off frame to the left. 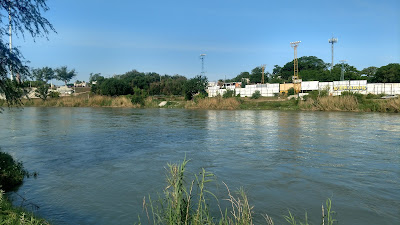 Well now it was time to finally hit the road and put some miles behind us. We still had almost five hours of driving with 10 Geocaches and some sites to see along the way. Driving north along US-277 we found three quick caches: one at a cemetery (GC4N23X) and two roadside caches (GC29WHF and  GC35ZC8), before arriving in Del Rio for lunch.

Westbound on US-90, our next cache was the Ye Olde 4-Wheeler (GC36XP2) which brought me to stop and capture a photo of this old west wagon before it completely fell apart. 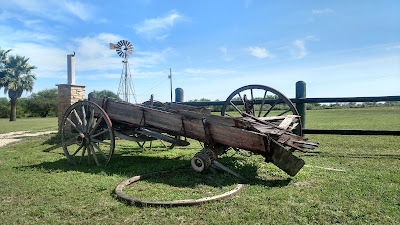 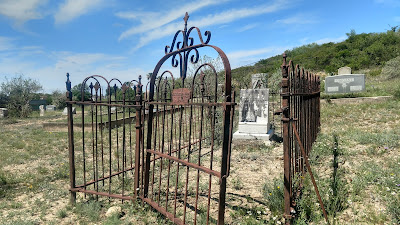 Next was another cemetery cache (GC3B4NE) in Comstock. In 1882 and 1883, the Galveston, Harrisburg, and San Antonio Railroad built track through Val Verde County and the town was established as a station and named for John B Comstock, a railroad dispatcher. The graves date back to 1883, but there were three that really caught my attention. No stories behind them. It's just the emotion and photo opportunity they gave me. Like this first one of Lucy Denmead who couldn't escape death in 1902, or did she? 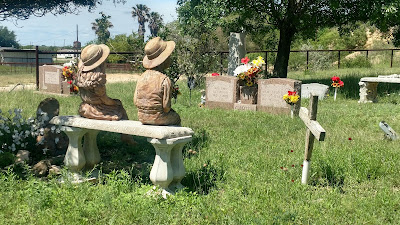 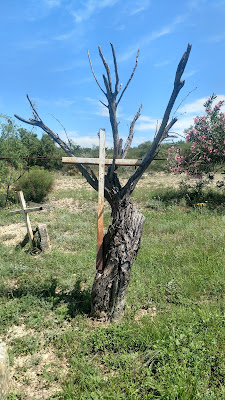 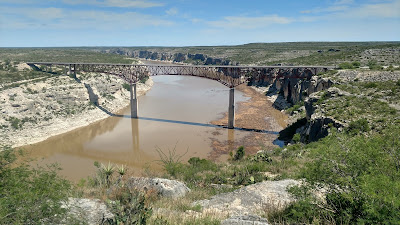 Next cache (GC5N4E2) was at the rest area where US-90 crosses the Pecos River. I once passed through here 10 years ago while I used to drive an 18-wheeler, long before this rest area was built. Back then I had to park on the shoulder. The only thing I do remember was the remains of the old highway which ran down towards the river to the original bridge built in 1923 and destroyed by floodwaters in 1954. The current Pecos High Bridge is 1310 feet long and 273 feet above the water, and is the highest highway bridge in Texas.

At this southern end of the Pecos River it empties into the Rio Grande just a half mile down. 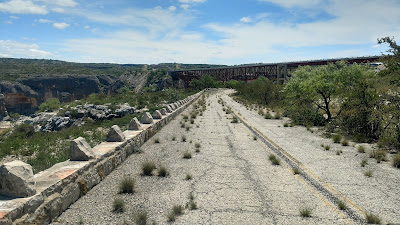 Just down the road was another cache (GC2NZHP) and another bridge. These two bridges cross Eagles Nest Creek Canyon just north of the Rio Grande River. 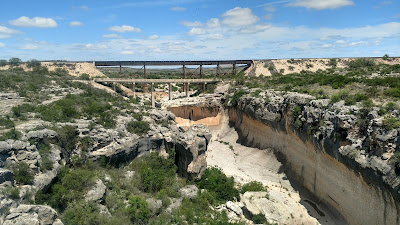 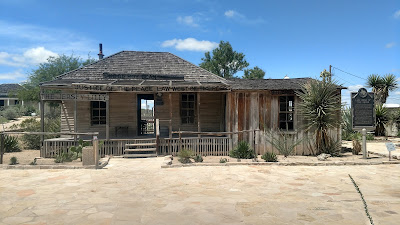 In nearby Langtry was our next cache (GCK9CH) and someplace I've wanted to stop for a long time, the "Law West of the Pecos." In 1882 the lawlessness was so bad that the railroad asked for help from the Texas Rangers. The closest legal authority was in Fort Stockton over 100 miles away. With the blessing of the Rangers and the railroad a proprietor of a store housed in a tent in Vinagaroon was appointed as the first Justice of the Peace in Pecos County (now Val Verde County) August 2, 1882. 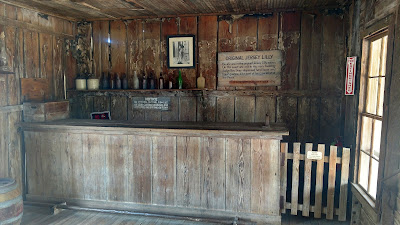 Roy Bean never one to stand on ceremony tried his first case the week before the appointment. In 1883 the judge moved his business and his court to Langtry, Texas. There he built the Jersey Lilly Saloon, Court Room and Pool Hall. Some legends cite Bean as being a "hanging" judge, but there is no record that he ever sentenced a man to be hanged. The only law book the Judge ever owned was the 1879 Revised Statues of Texas. Occasionally he actually used it.

The "Judge" had great admiration and fascination for the famous English actress Lillie Langtry. She was internationally know as the "The Jersey Lily so he named his establishment after her. A sign painter commissioned (for food and drink) to letter the sign misspelled "Lily".

One of the most colorful stories about the Judge is true. He successfully promoted the Maher - Fitzsimmons prize fight in February 1896. It was staged in defiance of U.S. and Mexico law on a sand bar in the middle of the Rio Grande River.

A couple more quick caches along the way home and that was the end of another adventurous weekend of exploring the history of the Old West Texas. Thanks again for stopping by and following along in our adventures. Until next time, happy trails.
Posted by Mark at 2:09 PM