Exploring the Ghost Town of Girvin, Texas and Hiding a Few Geocaches

Shortly after arriving in West Texas in early 2016, I started working in construction on a solar farm just south of Girvin, Texas. Passing through here every day going to and from work, I would often stop and explore a little more as I noticed different buildings. I also researched the internet to find it's history. And on one occasion, I had the opportunity to talk to one of the locals there and learned a rather interesting story which I'll reveal in a moment.

Surprisingly there weren't any geocaches here. As a matter of fact, the nearest cache was at a picnic area four miles up the road. Then ten more miles beyond that. As I learned more and found more I began hiding geocaches so that other geocachers could also learn of Girvins' history.

So going back in time; a community, originally named Granada, began there in the 1890's when cattle ranchers moved into the area. In 1912, the Kansas City, Mexico and Orient Railroad completed track construction from Mertzon after crossing the Pecos River. A post office was established on January 31, 1913 and the town was officially named Girvin, after local rancher John H. Girvin. The original town site was located on both sides of the tracks, near the rail station. You can see in the second photo below where I think that train station was once located by the raise ground and old railroad ties lay where perhaps a separate track once was for loading and unloading.

Soon after the railroad began stopping, the town grew and had a store (pictured at the top of the page), a hotel, a saloon, and a lumber yard. Stock pens were built nearby while awaiting shipment. You can still see some remnants of those below. Look hard enough in the photo and you can also see the geocache I hid there as well (GC6PCFM).


Eventually as more and more automobiles arrived in West Texas, you needed a gas station and garage (GC6P64R). The building in the photo below used to be two stories. The gas pumps and shop below, and storage and perhaps even living quarters above. I've seen photos from as recently as 2000 that still showed walls for the second floor above the fuel island to halfway back. Sometime after that an arsonist set fire to the place and that came down.


The first school was a small wooden building. In 1924 Girvin had an estimated population of only 15. In the late 1920's, with the production of oil in the nearby Yates and Trans-Pecos oilfields, Girvin became a hub for the delivery of equipment, supplies, and workers with families. A larger brick schoolhouse was being constructed and was already proving to be too small as one class had to meet in the lumberyard during the 1930-1931 school year. Oddly enough though, that is the one public building that is still maintained today. It is used by those few remaining residents as a community center and voting place (GC6QRXC).

Unfortunately, in 1933 a new highway from Fort Stockton to McCamey bypassed the original townsite about a mile to the south, and Girvin immediately began to decline. The community reported five businesses and a population of seventy-five in 1939. In 1944 the Panhandle and Santa Fe Railway, which by then owned the track through Girvin, razed the section of the Girvin depot used for freight; and the passenger station was closed in 1955. By 1963 the estimated population of Girvin had declined to thirty, with only two businesses reported. And by 1967 the original townsite was abandoned all together. A few of the businesses and residents had moved down closer to the highway (now US-67), but even they eventually left. In 2000 the population at the new site was still estimated at thirty.

One of the those businesses which remained open until the very end was the Girvin Social Club (GC6P62F). This small red building was once a popular place. A cafe and saloon, it finally shut it's doors in 2011. The first pic below is a painting of what it looked like in it's peak. The second photo is what I saw back in 2016. Now, I'm back working on another solar project west of Girvin and am happy to say that it's back open again as McKee's Bar. 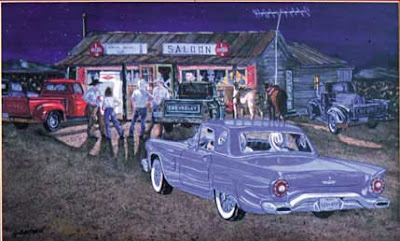 
I read another article about a Arno and Mildred Helmer purchased the railroad depot in 1956 after it closed. Then moved it down near the new highway where they opened it as the Girvin Store and Post Office. That was where most of the traffic was passing through now. It was also remodeled so that the Helmer family could live in it as well. It was said to be next to the Social Club and these two buildings are across the street on the next corner. I'm not sure exactly which one it was, but my guess was that it's the white building below. There was also a gas station on the corner and that would fit more of the yellow building with the rail car. I'll need to stop at the bar one day and see if any of them know. I do know that the yellow building below is where some of the remaining residents meet on Tuesday nights, hang out, and play poker.

And finally I come to the Girvin Cemetery (GC6QRW8). While there are dozens of graves there, most are unknown and are just iron crosses. Only six still have headstones which have names and dates. And it isn't maintained. The few headstones that are identified range from 1917 through 1941.

Now remember at the beginning I told you that I talked to one of the locals when I first started working nearby in 2016? One of the interesting headstones is a double sided headstone for J. W. Steele and J. P. Ryan who both died on Feb 9, 1927. I Googled the names but came up empty. I heard the story from the resident about 2 boys who were passing through town and killed in a car accident near one of the Pecos River bridges. They were buried as unknowns before the families came looking for them several months later. The families followed the route towards their intended destination asking people if they remembered seeing them. The people of Girvin told them the story of the accident and they matched the description. Could these be the two boys? I don't know. I haven't been able to confirm the names or date. If you have any information to add, please forward it to me.

Update 03-19-2020: I found a newspaper story from the Fort Worth Record-Telegram dated March 1, 1927. The first sentence doesn't make sense to me, but I'll post exactly how it's printed:

"SAN ANGELO, Feb 28, -- The with a wound on his forehead and the Sunday in the Pecos River at the Girvin bridge, according to late advises today from McCamey. Both Ryan and J.W. Steele, pipe line workers for the Southern Crude Oil Purchasing Company, met death when their roadster missed the bridge on a curve in a rain and sleet storm and was hurled into the stream.

"Steele's body was found Friday and a wound on his forehead and the absence of money led to a search for a companion with whom Steele was said to leave McCamey for Pyote. This man's identity was not known until the second body was found. Besides a time check identified as Ryan's, there was about $50 in his pockets. Receding of the water three feet disclosed the submerged car Saturday."

Well that's about it for my trip through historic Girvin Texas. I'd like to recognize a few websites recommend them to you for even more information: Texas State Historical Association and TexasEscapes.com . Both of these are excellent resources for Texas history. And as always, be sure to Like my https://www.facebook.com/AwayWeGoUS page or follow my blog directly using the buttons on the right column of this blog. Until next time...
Posted by Mark at 11:07 PM