Welcome back! Today's adventure brought us down to the Austin, Texas area where my wife had a business seminar to attend. So while she spent the day in meetings, I used that time to explore some rural areas around Austin. Then after rescuing her after the meetings were over, we took a tour of the capital building in Austin. Let's get started...

After dropping her off, I headed south on I-35 out of Austin to just past San Marcos. Exiting the highway to get to a couple of small family cemeteries a block away, I was delayed by a long slow moving freight train. Looking at my c:geo live cache map, I noticed two caches located just in the shopping center to my right. Might as well make this delay useful! So I gave up my spot in line and grabbed caches GC1PX9A and GC33APV. By now the train had passed and I was able to continue on.

My first planned cache was at the Pitts Cemetery (GC2ZQ9Z). From the historical marker: John Drayton Pitts was born at sea on August 26, 1798. During the voyage of his parents John and Jane Pitts, from England to Charleston, South Carolina. They moved to Georgia during the war of 1812, and John D. married Eliza Permelia Daves in April 1819.

John D. Pitts was elected to the Georgia Legislature in 1841 but later moved to Grimes County, TX. He persuaded his extended family in Georgia to join him, and in 1843 eleven Pitts families moved to Texas.

John D. Pitts served as Adjutant General under Texas Governor George Wood from 1848 to 1849. Pitts bought land here from his friend General Edward Burleson in 1850. And eventually much of his extended family settled along the San Antonio - San Marcos stage route in a community called Stringtown.

Pitts Cemetery began in 1850 with the burial of John Malone, infant son of James L. and Eliza (Pitts) Malone and grandson of John D and Eliza Pitts. Eliza Pitts was buried here in 1851. In 1861 John D Pitts died on his way home from a secessionist convention in Austin, and was buried here. The cemetery was set aside by Pitts' sons-in-law James Malone and Samual Kone Sr in 1875. The cemetery continues to serve as a burial site for the descendants of John D and Eliza Pitts.

Just down the same road was another small nearly forgotten cemetery on private property and difficult to see. The Byrd Owen - Payne Cemetery (GC2ZQ96) is located in an area of Hays County south of downtown San Marcos known as Stringtown. This area was settled in the early 1840's and was "strung out" along the road; thus the name "Stringtown."

Being on private property there's not much to see from the road except an old wooden sign. The Find-A-Grave website shows 9 marked graves dating from 1879 through 1910. There was a Boy Scout restoration project back in 1994. Then again in 2008 by the Hays County Historical Commission. You can see some photos from their efforts at the HCHC website.

Jumping back onto I-35 south, I get to New Braunfels and my stomach starts reminding me that it hasn't gotten any food yet! I spot a Golden Corral sign and take the exit. After satisfying the stomach, I open the app to see a parking lot cache right there. So naturally you have to grab it also to commemorate the meal right! (GC6ZHQW) 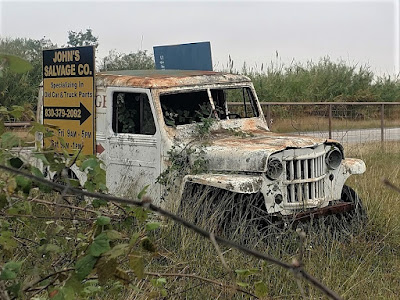 Taking some backroads south to get a couple of new caching counties reminded me of why I prefer driving over flying. Even when traveling long distances, I prefer to take a drive. Geocaching can take you to some interesting places as a destination. But it's the Adventure of getting there and seeing the unexpected. Like this relic from the past. An old Willys Jeep Wagon now used as a billboard for a salvage company. Somebody needs to restore that piece of history. Or perhaps an upgrade retro-rod with modern powertrain and interior conveniences.

Further down the road in the town of Stockdale was this old Jeep sitting neglected at the corner property of another business. 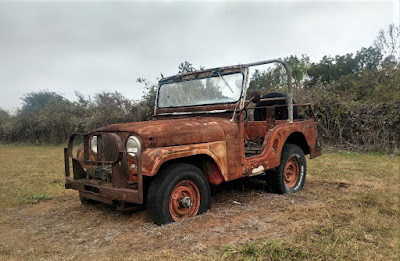 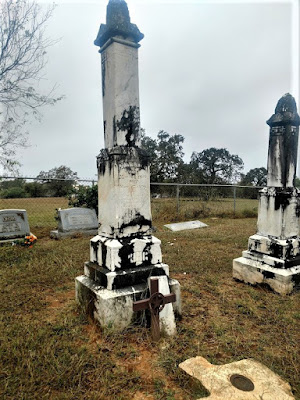 OK, back to geocaching. My next stop was at the Stockdale Cemetery (GC5G6W8). Based on the historical marker: Before the Stockdale Cemetery was begun in the 1870's, most burials took place in private, family graveyards. About 1873, however, a young man who was not related to any of the local settlers was thrown from his horse and killed. To provide a place for his burial, Dr. T. M. Battle gave one acre of land at this site, and the burial ground has been used by Stockdale citizens since that time. Additional acreage was either purchased or donated over time.

The earliest marked grave in the Stockdale Cemetery, that of Sallie A. Pope, is dated 1873. Many early settlers are buried here, including the towns founder and Texas Ranger, John R. King (next photo), and the first schoolteacher Martin West. The cemetery also contains the graves of numerous war veterans and victims of the post-World War 1 flu epidemic. 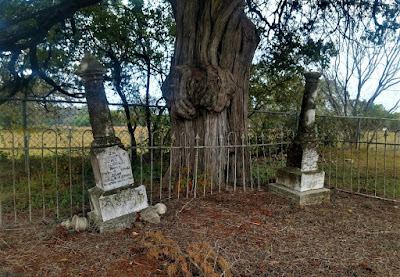 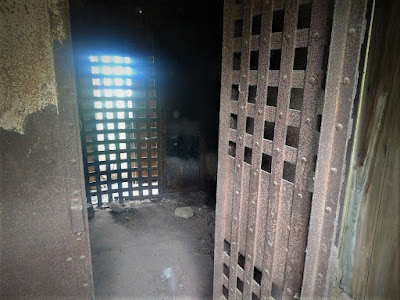 From there I go down to a very rural tiny town called Gillett in Karnes County. I'm not sure if it's considered a ghost town. At it's peak it only had a population of 200 and now down to about 120. But it did have several abandoned buildings, stores, and even this two room jail that sat back in the overgrown brush and trees that you could barely see it from the road. The front room was used as a courtroom and the back was jail (GC1MC5N).
The site was first settled around the time of the Civil War at the junction of the San Antonio-Victoria and Helena-Seguin roads. In 1869 Carl Edward Riedel constructed a dam on nearby Ecleto Creek to power his sawmill, gristmill, and cotton gin. The small settlement that developed was named in his honor, but when the community applied for a post office in 1871, postal officials inexplicably changed its spelling from Riedelville to Riddleville. By 1882 Riddleville had, in addition to Riedel's industries, a Methodist church, a school, a physician, and two general stores. Daily mail came from Helena and Luling by hack. By 1895 the town had a third general store and congregations of Methodists, Baptists, and Cumberland Presbyterians. Among its most notable residents were author and industrialist Max Krueger, horse-trader Sarah Jane Scull, and pioneer airplane builders Prentice and Arthur Newman. Gunfighter John Wesley Hardin also reportedly resided there for a time. 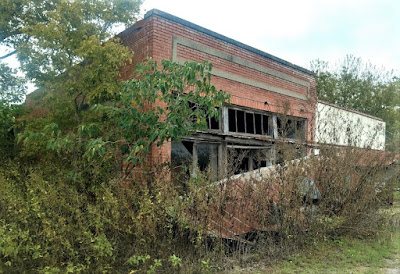 In 1905 residents petitioned to change the town's name to Gillett in honor of E. G. Gillett, a lawyer and newspaperman in Runge who encouraged the town's development. During the early 1900s Gillett developed into a trade and social center for northeastern Karnes County. In its heyday between 1910 and 1920, Gillett had a post office, a school, a hotel, a cafe, a meat market, a barbershop, a pool hall, a wagonyard, a cotton gin, a physician's office, a blacksmith shop, a Woodmen of the World lodge, two general stores, two drugstores, and two saloons. A community church served congregations of Baptists, Methodists, Lutherans, and Cumberland Presbyterians. With the advent of the automobile, three garages were built at the community. Gillett's population grew to 200 by the mid-1920s but declined markedly during the drought of the 1950s. The community's school closed in the 1970s. In the early 1990s Gillett was a center for a cattle-raising area. The former school building was used as a community center.

I headed over to the cemetery to check it out. There wasn't a cache there, there's only one cache in town and that was by the jail. But I still can't pass up the cemetery visit. I was kinda odd that most of it was kept up and mowed while other parts overgrown. You can see in the first photo the two towering headstones near completely hidden by the brush. When walking through these old cemeteries, it's not uncommon to see a lot of infant and toddler graves. However this more recent 2008 headstone really caught me off guard. Imagine having triplets. Delivering one 4 days before the other two. Only to have life for one day. Then a few days later the other two are born. One lives a couple of days and the last only a couple of weeks. I can't imagine what they must have gone through. Another headstone not far away is another who had a long journey in this world of 120 years. We'll never understand these things until we take that first step into eternity ourselves when all things become clear. 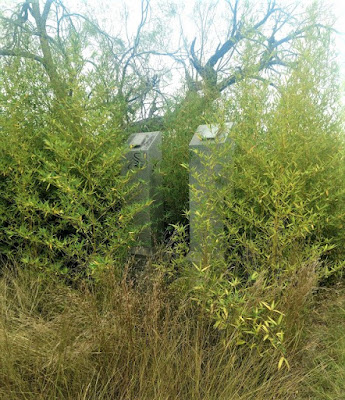 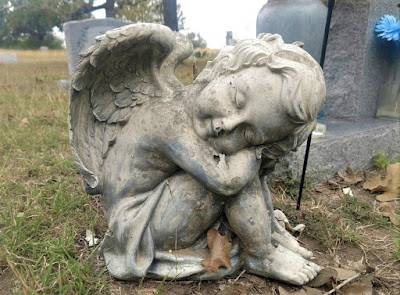 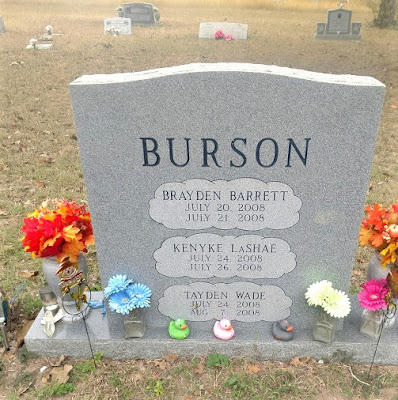 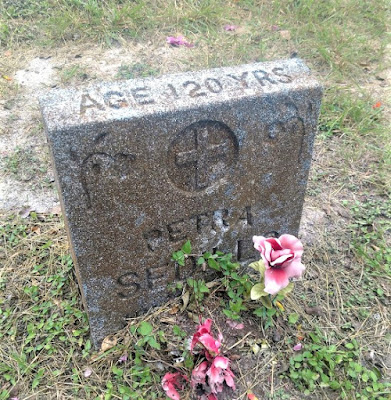 Moving on to another type of memorial and another new caching county. A newly erected memorial paying tribute to those Dewitt County residents who served in Vietnam and crosses with a photo for each who "gave all" in combat (GC67G39). 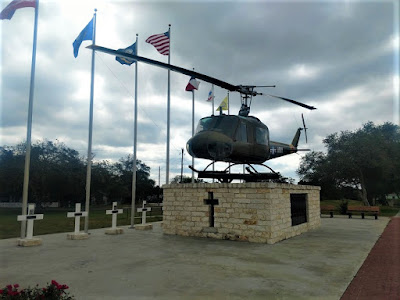 Moving onward to continue picking up needed caching counties, brought me to Goliad County and the little town of Weesatche, Texas. Established in the late 1840's to early 1850's, it was originally called Middletown because it was halfway between Goliad and Clinton. The post office was established on November 22, 1855, but confusion soon followed thereafter with another Middletown, Texas town in Comal County. The residents decided to rename their town Huisache for the sweet acacia tree in the area. The new post office was named in May 1860, but misspelled as Weesatche to match its phonetic pronunciation.

The first cache was located at the Woodlawn Cemetery near the center of town (GC27R6Y). The second at the St. Andrews Lutheran Church Cemetery on the south side of town (GC27R77). You can see from the first headstone pictured below the influence of German and other eastern European settlers there were in early Texas history. The St. Andrews Lutheran Church was organized in 1891 by Rev. Theordore N. Ander, who left Ander, Texas to become the regular pastor. 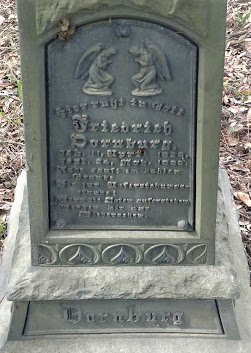 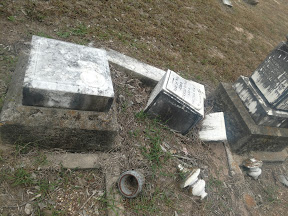 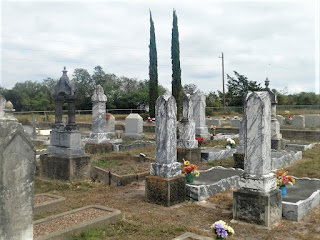 While it may look like a set from an old west movie or TV show, these really are the original storefronts from the 1800's along Main Street in Weesatche, Texas. 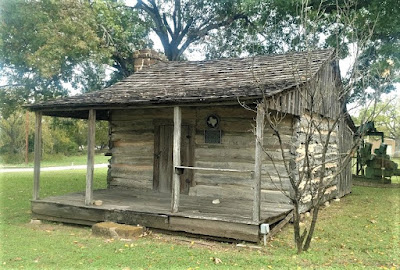 Finally making the u-turn and heading back up to Austin, I pass through Luling, Texas and a quick virtual geocache (GC8655). I won't give you any clues about the virtual, but I will tell about this historic old west cabin. The Rev. William Johnson (1822-1889), farmer and Baptist minister who came to Texas in 1833, built this shotgun-style cabin near Tenny Creek (11 miles NE of Luling). In the 1870's, family included five children. His son W. E. (Billie) became a physician in Tilmon.

Since 1893, the Jeff Connolly family has owned Johnson's land. T. B. Coopwood, M.D. used this cabin as an office in the late 1890's. Mr. and Mrs. Jett Connolly donated this house in 1972 to be relocated in this public park.

Now that I've picked up my wife, we head to the State Capital building for a walk through. There is a lot of history here and the surrounding grounds. We were running out of time plus we were both hungry! We did manage to grab four of the virtual caches outside (GCA4F6, GC588B, GC142B, GCB231) before calling it a day and headed to dinner and home. 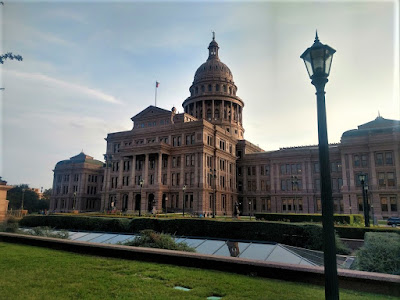 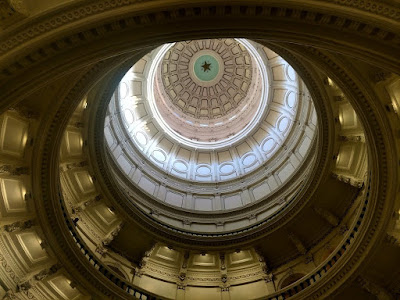