Welcome back for Day #2 of caching around Austin, Texas while my wife was busy in a work related seminar. Yeah she got stuck in a boring hotel meeting room while I got to go out exploring and Geocaching!

This first one was just a block away from her hotel but I completely forgot about it yesterday. It's called Texas Virtual Movie Cache (GC2B6C) and that's about all I can really say about it without giving away any answers. A "Virtual Geocache" is a cache that doesn't have a container and logsheet to sign. You gather information from the location and answer the questions in the cache's description. Then send the answers to the Cache Owner and log it as a find online. This one is a building and it was in a movie. If you've seen the movie, then you've seen the cache.

Also nearby was a Challenge Cache. Now a Challenge Cache is like a traditional physical cache. Usually they are pretty simple to find, like a lamp post cache, and not necessarily in a particularly cool location. Like this one for instance. Just an easy micro container in an office park. But the difficulty and/or terrain rating can be high based upon the "Challenge" to claim a find. This one is called AlphaNumeric Cache Name Challenge (GC3MH9W). The terrain rating was a "1" which means wheelchair accessible, basically anybody can retrieve it. However, the difficulty rating was a "4" out of 5. The actual container in reality was probably a 1/1.5. But the difficulty raised because of the challenge: "To successfully accomplish the AlphaNumeric Cache Name Challenge you must find and log 36 caches (on any date past or present) which have names starting with a different alphanumeric character, "A" through "Z" and "0" through "9." So not necessarily an easy task. 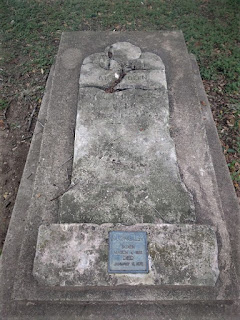 Next up was another Virtual Geocache (GC7F71) along with a traditional cache (GCMZXC) in a cemetery. Now because of the virtual, I can't say too much without giving out the answers. It is in an unusual location though. I think this may be the first cemetery I've been to located in a city park. I mean with a playground, walking trails, a pool and more. The one thing I did like was that they took some of the older broken headstones and placed them in concrete to keep them from further falling apart. This one below dates back to 1872. I did find a story about the place being haunted. Supposedly people have seen ghosts placing flowers on the graves. I don't know anything about that. Most of the time when I'm discussing ghost stories with someone who is making the claim, there were other "spirits" being consumed if you know what I mean. I think that's the reason they're seeing things if you ask me!

Moving on down the road to the south, I decided to grab a few caches within a Power Run. A Power Run is a line of caches close together, most of the time easy to find but sometimes harder, designed to give you a boost in your total number of cache finds in a short amount of time. This one was called Monkey Letterbox Series (GC6FX73), hidden by a cacher who goes by the name of CuteLittleFuzzyMonkey or CLFM for short. I think all of his hides, and he has a LOT of hides, has the word Monkey in the title. So a Letterbox Cache combines Geocaching with Letterboxing. Letterboxes have a rubber stamp in them which you can use to stamp your own booklet (if you participate in that activity, which I don't). I found a quick 10 of them before moving on to more cemeteries.

Speaking of a cemetery, next up on this list was Evelyn Cemetery (GC2X05N) located in Mustang Ridge, Texas. Mustang Ridge known for ranching in the 1800's and a popular stop for herding because of small lakes in the area. Around 1900 residents began farming cotton and that took over until the Great Depression hit. Then people went back to ranching. Sadly there were only two forgotten headstones here along the road at the edge of someones property. This one standing and the other fallen over. This one looks like it could have been 1925, but I couldn't get a good look at them. 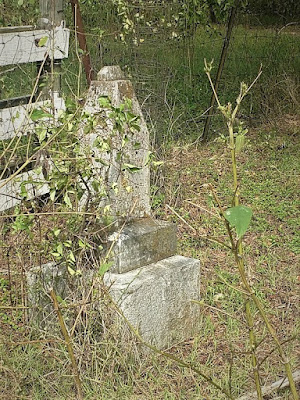 This next cemetery cache I couldn't find. At the Burch-Vance Cemetery (GC2X080), most of the headstones have been knocked over. I suspect it was neglected for a long period of time and had become overgrown. But now it is maintained on a periodically. There are 15 graves here from the Burch and Vance families ranging from 1886 through 1940. Perhaps one day, I'll make it back to this area and will find the cache. 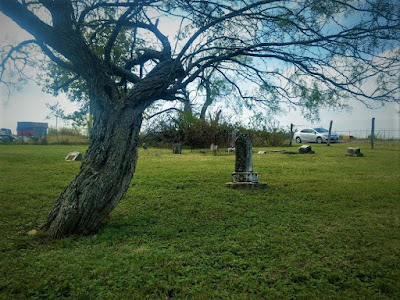 Finally to end the day, my last cache brought me to Salem Cemetery (GC1DMVV) next to the Salem Lutheran Church. There are 345 interments there going all the way back to 1884 and still in use to this day. I like these old iron fencing that I see placed around the family sections or even just a single grave. Unfortunately I couldn't find anymore information for this area or even the church itself. 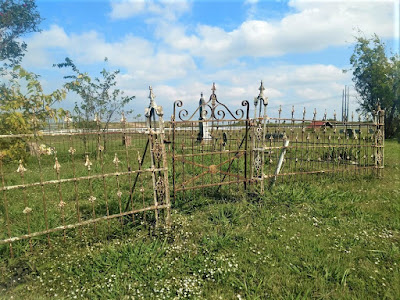 Well that is all for today. Back to the Omni Hotel to rescue my wife from the boring training seminars! Thanks for riding along. Until next time...