2021-03-05: Touring the Mississippi Gulf Coast for History and Lighthouses

Finishing up the eastbound segment of our huge looping roadtrip around the east half of the United States, we followed the Mississippi Gulf Coast to check out some lighthouses and other historical sites. Obviously picking up some geocaches along the way too. So join us as we exit the Interstate, drop down to the backroads highway of US-90, and let's see what (and who) we found...
Our first geocaching stop was for a virtual geocache (GCED4C) at the statue of French explorer Jean Baptiste Le Moyne. Born in Montreal, New France (now Canada) in 1680, he landed and explored this area of Bay St Louis, MS in 1699. He was appointed governor of French Louisiana several times  in the early 1700's. Also known as Sieur de Bienville, he died while in Paris, France in 1767. 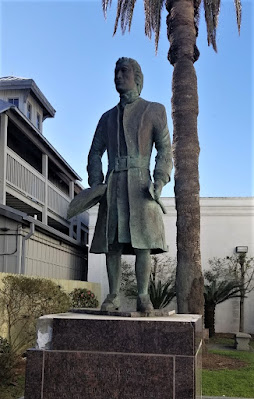 Moving along to Gulfport, MS, we come to our first lighthouse. Ship Island is located out in the Gulf of Mexico, about 12 miles south of Gulfport. The island got its name because it was often used by early explorers and larger ships to anchor, sending smaller boats navigating the shallower waters to the mainland. With the efforts of Congressman, and later as Senator, Jefferson Davis in the 1840's, Ship Island finally got its first lighthouse built in 1853. It was a 45-foot round tower made of brick.
In 1861, Confederate soldiers abandoned the fort and lighthouse on the island and returned to the mainland. They set the structures on fire to make it more difficult for Union troops to use the lighthouse to aid in navigating the waters. However, Union forces occupied the island before long and had the lighthouse operational once again by late 1862. In 1886, the brick lighthouse was considered unsafe and a square wooden lighthouse was constructed later that year. The lighthouse continued operating by the U.S. Coast Guard until 1957.
In 1959, a private use permit was granted to Philip Duvic who renovated the bottom floor to a kitchen and bathroom, second floor into women's quarters, third floor into a men's dorm, and the top floor a honeymoon suite. He eventually purchased the lighthouse in 1965 when the Coast Guard put lighthouses up for sale.
In 1969, Hurricane Camille severely damaged the wooden structure. And in June 1972, two campers lit a campfire too close for the windy conditions and caught the lighthouse on fire, completely destroying it. In 1999, a replica lighthouse was built on the island but destroyed in 2005 by Hurricane Katrina. And finally, another replica (pictured) was built in 2011, but not on Ship Island. This time right on US-90 in Gulfport making it more accessible to tourists. 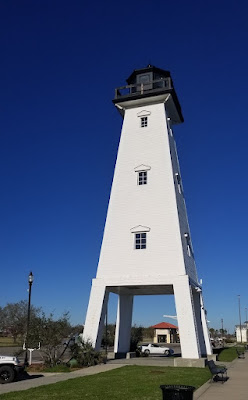 I also grabbed the geocache near the lighthouse (GC6ZKCN) before driving off to the next location.
Further east down the beach and a block off of US-90, you'll find this red-brick building and our next virtual geocache (GCD69F). The Mississippi City Courthouse building was originally constructed in 1893 as part of the Harrison County Clerks office, the "Old Courthouse." It was the last remaining structure associated with a complex of courthouse buildings in Mississippi City, which served as the county seat from 1841 until 1902. After that the county seat was moved to Gulfport. The original building was destroyed during Hurricane Katrina in 2005. This replica you now see was constructed in 2009. 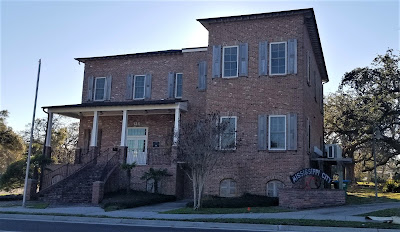 Moving on over to Biloxi, we come to one of the lessor known lighthouses on the Gulf Coast. Constructed in 1965 as part of the Broadwater Beach Resort, the resort was destroyed by Hurricane Camille in 1969. Rebuilt as the President Casino in 1992, it too was destroyed in 2005 by Hurricane Katrina. This is all that remains. Even the geocache hidden near the base tends to disappear often and I had to DNF that one (GC6DTPB). 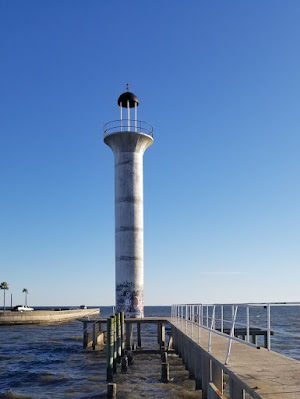 The Biloxi Lighthouse (GC7B8V6) was one of three Mississippi Sound lighthouses authorized in 1847 by legislation sponsored by Mississippi Representative Jefferson Davis. The Biloxi Lighthouse was erected in 1848 and was one of the first cast-iron lighthouses in the South. It has survived two of the deadliest hurricanes in Gulf Coast history, Camille in 1969 and Katrina in 2005. Katrina’s record-breaking storm surge crested at 27.8 feet above mean sea level. It destroyed nearly the entire city, but the lighthouse remained standing. 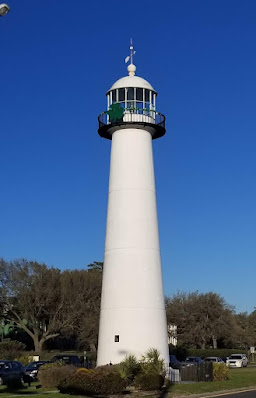 One of the features of this lighthouse is that it contains a webcam. You can login to the live feed from your smartphone to take that unique selfie as if you were both on the ground and up inside the lighthouse. Yep, that's me down in the lower left corner by the light post.

Our final stop was in Ocean Springs, MS for another virtual geocache (GCEC3D) at the Mississippi Vietnam Veteran's Memorial. 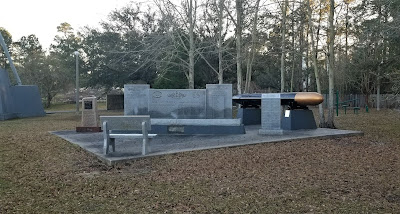 Making our way back to Interstate 10, yeah I know it sounds boring, but we have to get to Central Florida. We spent the following day with family and the next morning saying my last goodbye at my father's funeral. After the funeral we had to get back on the road up to North Carolina where we return to the Maiden Creek solar project for a couple weeks of touch up work. Then we head back to Texas for the next project. But we'll be taking the LOOOONG WAY back via the northern route! So be sure to check back in soon. Until next time... 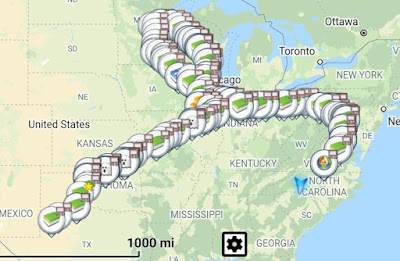 To follow along on our travels and keep up with my latest blogs, you may do so here of course by clicking the "Follow" button to the right. But also by using one or more of your favorite of these social media platforms: Facebook, MeWe, Gab, Reddit, Parlor, Twitter, RVillage, GETTR, Instagram, and TruthSocial. These all link directly to my profiles. Again, please feel free to comment and / or share.
Posted by Mark at 11:24 PM