WOW! What a roadtrip! So after two weeks, we finished up in Maiden, NC and now have to drive back to McCamey, TX to start the next project. Google maps says that it should only take 21 hours and 1400 miles. But where's the fun in that? BORING!! This wouldn't be the AwayWeGo Geocaching Adventures blog if we did that. NOPE, we took the LONG way back to Texas. It ended up taking us 12 days and 3404 miles later to reach our destination! So I hope you'll join us over these next few weeks as I bring you the stories and photos of the places we've discovered geocaching and sightseeing along the rural backroads and byways of the upper mid-west. So let's get started with Day 1 in North Carolina and Virginia... 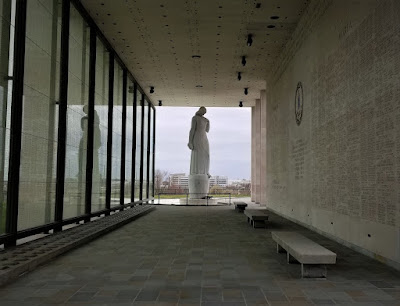 Our first stop after checking out of the Lake Norman RV Resort on this cool spring morning, was for a virtual geocache (GC7B67D) in the historic town of Hillsborough, NC. On the grounds of the 1768 St. Mathews Church, later to become the Presbyterian Church, is the Old Town Cemetery. Not a traditional churchyard burial ground, it is one of North Carolina's oldest municipal cemeteries, established in 1757 by the Colonial Assembly and is the final resting place of several people who are significant to North Carolina history. 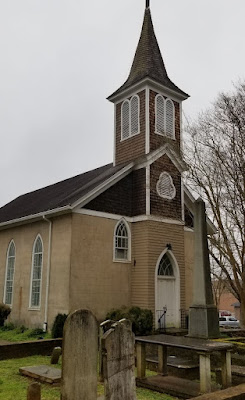 Among those buried here are William Hooper (1742-1790), who studied law in his native Massachusetts before moving to North Carolina where he established a law firm first in Wilmington and then Hillsborough. His gravestone lists several of his accomplishments, his greatest one was the signing of the Declaration of Independence. In 1894, Hooper's gravestone, and perhaps some of his remains, were moved to the Guilford Court House Revolutionary War battlefield. After a statue of Hooper was erected a few years later, the gravestone was returned to Hillsborough.
The tallest headstone is an obelisk honoring William Alexander Graham (1804-1875), who was governor, a United States Senator, and vice-presidential candidate.

The oldest part of the cemetery is just north of the church buildings in what now appears to be an empty field. In 2016, a ground-penetrating radar revealed that at least 100 graves are located there. The original grave markers, probably rough fieldstones or carved and painted wood have long vanished.
The only other stop in North Carolina on this trip was to make up for a previous DNF, see previous blog. Located in Chapel Hill was a geocache for the North Carolina County Challenge. I first attempted the geocache back in 2019 while working on another project and taking a roadtrip to pickup new counties. At that time of my visit the cache was missing so I wasn't able to sign the logsheet. Last year I completed the last couple of missing counties I needed to complete the state, but wasn't able to make it back to avenge my DNF. Upon this return trip, I noticed a new earthcache was placed at the outdoor amphitheater. So we gathered the needed answers to submit for the find.

Then we made the short hike through the park into the woods to find the ammo can replacement to claim a find for finding a cache in ALL 100 North Carolina Counties (GC19YRC)! 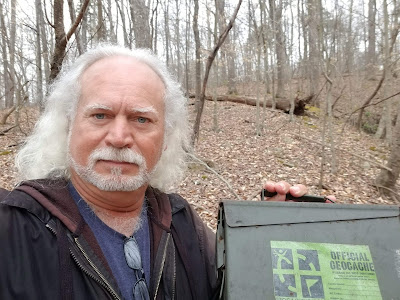 Crossing over into Virginia, it's back to focusing on county caching, virtuals, and other places of interest. First up were a pair of geocaches in Brunswick County and the town of Alberta. Usually not something I want to do when I don't want to spend a lot of time and that is hunt for a train hide geocache (GC80MYC). However this one was found pretty quickly and I moved a few blocks down the road. 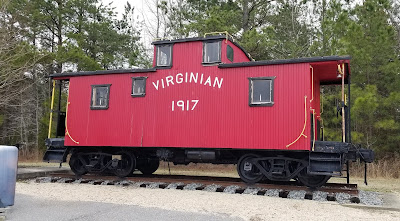 We drove to another cache (GC8WD4N) just down the road at the sight of the original school house. I was hoping to find the remains of the school or something. But it was demolished in the 1980's and nothing remains except the short entry road to an empty field. I did find the geocache though.
Every now and then you get the unexpected surprise of finding something interesting when geocaching and sightseeing along the backroads during a road trip. The old bank building, now abandoned, is still standing on Main Street and 1st. I did a quick search to try and find some history on the building but didn't have any luck. It looks like a similar building I saw down in a small town along the Rio Grande in South Texas. 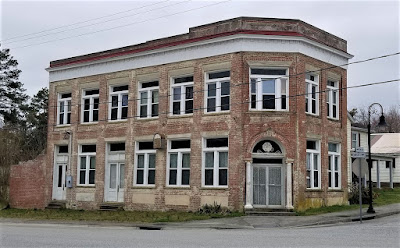 Driving north on US-1 into Dinwiddie County, we passed by this old motel and I just had to stop and get a photo of it. Located in McKenney, VA, the Wilmurt's Motel first opened in the 1930's as Wilmurt's Lunch Room, Cabins, and an Esso Gas station. As automobile travel grew in popularity after WWII, it expanded into a motor court / motel style business and did away with the cabins. It finally closed in the early 2000's and sits empty. 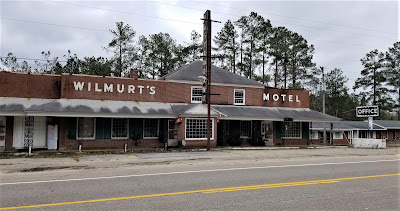 For this counties cache, we drove up to the town of Dewitt at the old fire tower (GC84NWP). The fire tower is no longer in service but at one time there were more than 150 fire towers scattered all across Virginia and were used to detect forest fires. Tower operators would sit up in the small room at the top mostly during the spring and look for smoke columns. When they saw one they would check with a neighboring tower for a cross reference and then call or radio a forestry person who would respond. Virginia on average has about 1,000 wildfires each year.

When we got to the city of Richmond, we had originally intended to find the virtual geocache at one of the large cemeteries that contain some significant interments of Virginia history. However by the time we got there they were just closing the gates so we couldn't get in.
So we drove over to the Virginia War Memorial for the virtual geocache there (GC7B656). In 1950, five years after the end of World War II, the Virginia General Assembly authorized the building of a memorial to honor and remember the nearly 10,000 Virginians who made the ultimate sacrifice serving in the U.S Armed Forces. A design was chosen, as was the location – nearly five acres overlooking the James River and downtown Richmond along U.S. Routes 1 and 301, the primary route from Maine to Florida before the construction of Interstate 95. As construction began, America entered the Korean War and plans were changed to include the heroes of this conflict. Construction was completed in 1955 and the Memorial was officially dedicated on February 29, 1956. The Memorial celebrated its 60th anniversary in 2016. The photo of the statue at the top of this page is looking through the center of this building below.

Our final geocaching stop for the day was in Hanover County at the I-95 Travel Bug Hotel (GC8132F). By now it was around 7:30 PM and we were hungry and tired ourselves and still needed to figure out where we were gonna stay for the night. So stop by next week when I'll show you Day 2 traveling through Virginia, Maryland, and West Virginia's colonial history, Revolutionary and Civil War sites and more.
To follow along on our travels and keep up with my latest blogs, you may do so here of course by clicking the "Follow" button to the right. But also by using one or more of your favorite of these social media platforms: Facebook, MeWe, Gab, Reddit, Parlor, Twitter, RVillage, GETTR, Instagram, and TruthSocial. These all link directly to my profiles. Again, please feel free to comment and / or share.
Posted by Mark at 9:56 PM