Hello again and welcome back to our Geocaching Adventures Blog. We hope you have enjoyed our stories so far and invite you to leave your comments below. Today's Geocaching Adventure has us driving deeper into the South West Texas to find Geocaches in each of the Brewster and Presidio counties. And being Texas where everything is bigger, driving just three counties over to get our first cache and a new county was 98 miles away! So let's get right to it...

Driving south on US 385, the first stop was an Earthcache (GC2KQE0) just north of Marathon, TX. This cache brings you a spot along the side of the highway where you can get a good view of how the earth buckles under the pressure of shifting continental plates. 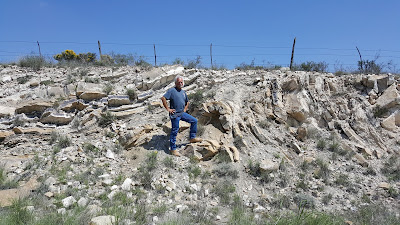 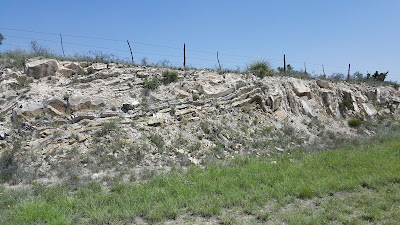 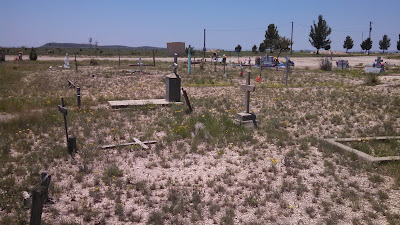 Continuing south and into the town of Marathon, our next two Geocaches was at the Marathon Cemetery (GC272P8 and GC190F6). According to Albert Chambers, an early resident of Marathon, the first people who were buried in Marathon were six Chinese railroad workers. They were buried on the north side of what later became the Albert Chambers home. This burial site was slightly to the southeast of the Old Chambers Hotel, a local historical building. Mrs. Fannie Harris, a long-time Marathon resident, related that the next burials were south of the old George Harris home in Beakley Draw known as the Village Green. In 1905 a flood displaced many of the graves. Mr. Guy Combs and Mr. W.J. McIntyre donated land south of town for an Anglo cemetery as well as land for a Mexican cemetry. Additional land was donated by the Combs family in 1951. Mr. Lewis Harmon, another early Marathon resident, has stated that the first burial in the new cemetery was a Mr. Quick, although no record of his death has been located. The rock work for the entrance gate and four corner posts was done by L.Cordova in 1933. The plaque on one of the entrance posts was donated by Laura & Thomas B. Henderson. It reads as follows: IN MENORY OF THE DONORS OF THIS LAND Guy S. Combs, Nora C. McGehee, Lila C. Matthews, W.J. McIntyre, 1902 Marathon Cemetery Ass'n 1961.  A recent survey of the Anglo cemetery shows that there are 587 marked graves and approximately 127 unmarked and lost graves. Approximately 12 graves remain in the civilian cemetery at Fort Pena Colorado, and only one grave remains in the military cemetery. Several of the graves from these two cemeteries have been moved elsewhere. Many unknown graves are located on area ranches. No survey has been made of the Mexican cemetery. 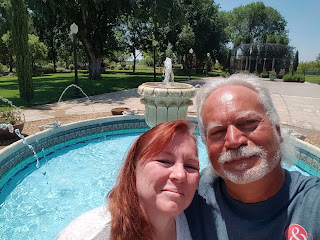 A few blocks away was our next stop at the Marathon Oasis (GC22ZR4) located in a park called Gage Gardens. Part of the Gage Hotel and sprawling across 27-acres of lush greens, the Gage Gardens encompasses a native landscaped garden park with lovely ponds, beautiful fountains, nine-hole putting green, rose garden, vineyard, fruit orchard and a large fire pit with banquette seating. Guests can meander around the quarter-mile walking trail through the meticulously landscaped garden or take the more challenging one mile jogging loop with interval exercise stations. Blooming with colorful indigenous plants that flourish year round, the garden is a welcome home for migrating birds and butterflies, and provides the ideal spot for a relaxing walk with your partner or dog, an afternoon picnic, an idyllic wedding or private party. 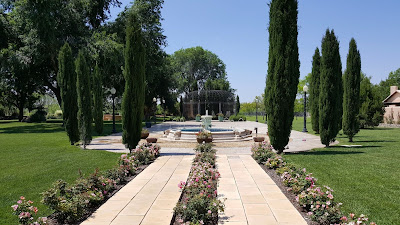 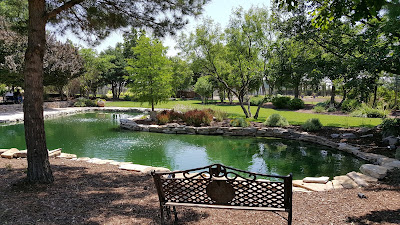 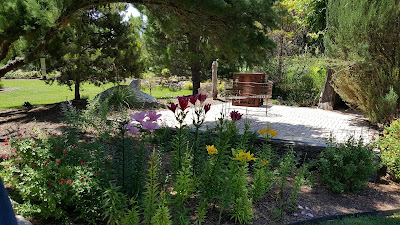 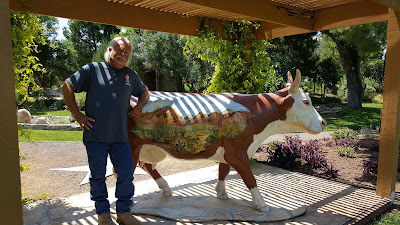 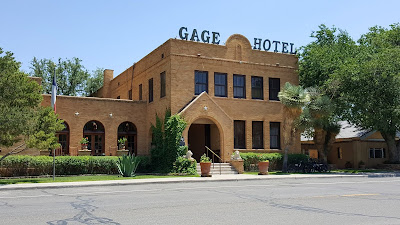 Speaking of the Gage Hotel, built in 1927 for pioneer Texas rancher Alfred Gage by acclaimed architect Henry Trost and has 15 guest rooms. Next door to the hotel is the Albion E. Shepard House, now restored and owned by the Gage Hotel. In 1883, completion occurred of the extension of tracks by the Galveston, Harrisburg and San Antonio Railway Line located between El Paso and San Antonio. Retired Sea Captain Albion E. Shepard arrived in the region as a railroad surveyor. He acquired much land in the area. Tradition documents the naming of Marathon to Capt Shepards observations of the similarity of the valley and its encircling hills to Marathon, Greece, where the mountains meet the waters of the Mediterranean Sea. At this site, Capt Shepard applied for a Post Office in September 1882 where he became the first postmaster. The Marathon town site was created on December 6, 1885. This two-story home was built by Shepard in 1890 and was later acquired by a neighboring rancher of the Hess Family where it remained until the 1980's. Today it is owned and was restored by the Gage Hotel in 2012, containing five guest rooms in the main house with two rooms in the carriage house out back. 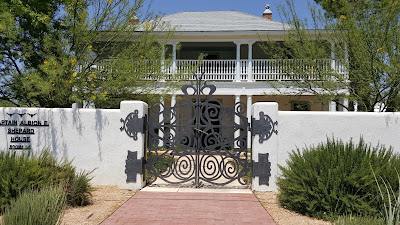 Another building of interest in Marathon is the "Club House." Built in 1888 and was the oldest school house in Brewster County, Texas. It was restored in 1928 and used for all public meetings and all elections. 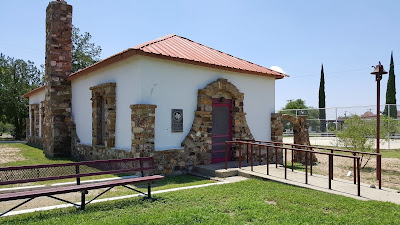 OK, this was neither a Geocache or nor historical site. Actually I'm not sure what it is other than maybe the first, smallest, and original Target Store. I don't know exactly, but we were driving down the road and there it was out in the middle of nowhere. We just had to do a u-turn and get a photo. Just one of the many things you see while out Geocaching! 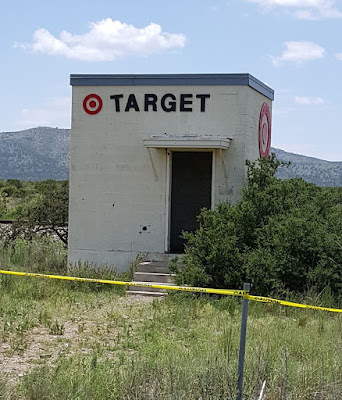 The next Geocache was a quick park and grab in a picnic area at the intersection of US-67 and US-90 where there was also a historical sign describing the Flat Rock mountains nearby (GCM38C).

A few miles further down the road was the town of Alpine, TX and our next Geocache (GC47NWN). On September 11, 2001, a ceremony was to be held for the ground breaking of the new building for the United States Border Patrol but was halted due to the 9/11 terror attacks of that day. Ten years later, another ceremony was held unveiling a piece of steel extracted from the rubble at the World Trade Center as a memorial to the victims. 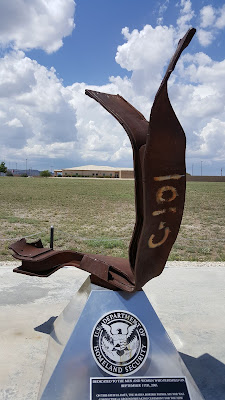 Continuing west on US-67/90 for a few miles, we travel through the Paisano Pass and grab our next Geocache (GC478TC). From the historical marker at that site: "Legend recounts that two Spaniards meeting here greeted each other "Mi Paisano" (My Countryman). First known to history when Juan Dominguez de Mendoza camped here on January 3, 1684. Well known after 1850 as a point on the Chihuahua Trail, an emigrant road to California."

Next along the way is a small town called Marfa. We stopped for our next cache (GC2CZ32) at a rest area and viewing spot for the Marfa Lights. The Marfa lights, also known as the Marfa ghost lights, have been observed near U.S. Route 67 on Mitchell Flat east of Marfa. They have gained some fame as onlookers have ascribed them to paranormal phenomena such as ghosts, UFOs, or will-o'-the-wisp, etc. However, scientific research suggests that most, if not all, are atmospheric reflections of automobile headlights and campfires. It was late afternoon when we stopped and the only light we saw was a big ball of fire called the sun.

Heading northbound on our way back home, we stopped by Fort Davis National Park for a quick Virtual Geocache (GC5958). We got there within 30 minutes of closing and storm clouds rolling in. They had just closed the register and we told them we were stopping for the Geocache, so they just let us tour for free. We did a quick 10 minute walk through the grounds and Candy still managed to take 63 photos! And we avoided the rain by just a few minutes after exiting the parking lot. 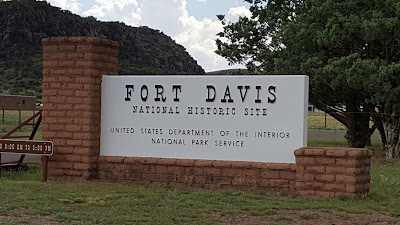 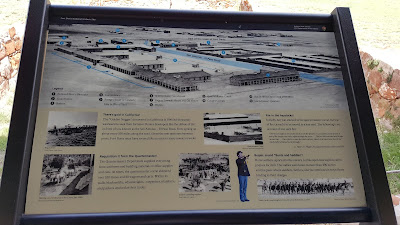 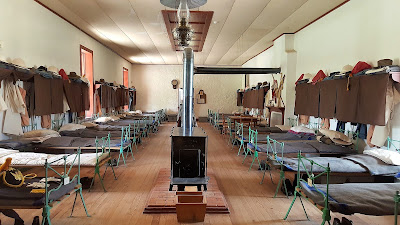 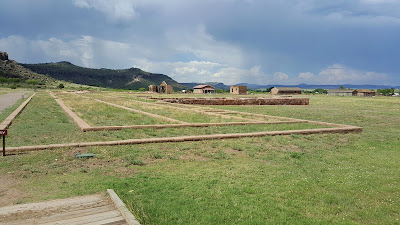 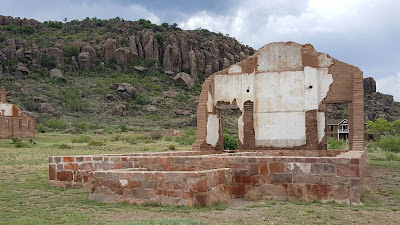 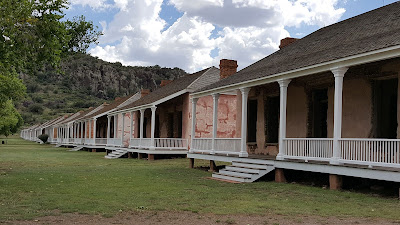 Further up the road beyond the rain and one last stop at the Balmorhea State Park in Toyahvale, TX to get an Earthcache (GC1W9T6) and a Virtual Cache (GCD374). This place was packed! I think everyone in the county was here on this hot afternoon to cool off in the San Solomon Springs. Again we were only interested in the caches, so we informed the front gate upon arrival and they just let us pass without paying the entry fee. And again after 10-15 minutes we had the required answers and on our way.

Well that's it for today. Thanks for following along and we'll see you next time out on the Geocaching Trail...
Posted by Mark at 3:09 PM