Hello and Welcome Back to AwayWeGo's Geocaching Adventure Blog. Today's adventure had us going up into New Mexico and was supposed to be deep into the earth at Carlsbad Caverns. However we forgot that it was a holiday weekend and it was very busy! So we decided to skip it for another day and continue up the road to Roswell, NM to see if we can find some extraterrestrials.

Our first Geocaching stop was near the town of Malaga at a New Mexico historical marker. (GC2AXZ6) The marker was to highlight the travels of Don Antonio de Espejo, leader of the third expedition to explore New Mexico, who passed near the spot on his return to Mexico City in 1583. After learning of the martyrdom of two Franciscan friars from an earlier expedition, he explored the Pueblo country and then followed the Pecos River Valley south.

Soon we arrived in the galactic rest stop of Roswell, NM only to find a packed downtown area due to the annual UFO Festival! Just not going to be our day. The line for the UFO Museum was out the door and down the block. I looked at the phone and found a nearby cache away from the activities that would also give us a moment to park and figure out what to do.

Arriving at our next Geocache (GC3A0KF) at the James Phelps White House. Built in 1912 and lived in by the family until 1972, the house was donated to the Historical Society of Southeast New Mexico in 1976. Now it is a museum.

Today the museum was closed, but we pulled in to find a car parked there with two ladies inside, probably in their 60's, and looking at us rather inquisitively. Were they also Geocaching? I parked about 5-6 spots away from them. After a minute or two, she pulled over closer about two spots away on my side. We stayed in our car and I just continued looking at my phone like I was texting. She then back out again and pulled up right next to us on Candy's side and rolled down her window. We then noticed she had cuts on her face and was bleeding. She proceeded to warn us about a bird that had swooped down and attacked them. This was the reason she had cuts on her face. We thanked her for the warning and they left. 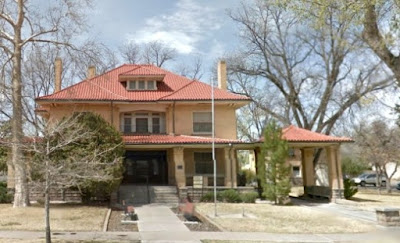 Well being so close to the cache, I didn't want to leave without an attempt. The parking lot was about 100' from the cache location. We looked out the window but didn't see any bird flying around. I opened the door and looked some more. Nothing. A few SECONDS after standing up and looking around, this bird comes out of nowhere swooping down to about a foot above my head! I quickly jumped back into the car. There IS an alien attack bird out there on the loose! Now what to do?
Looking carefully we noticed a driveway running right along side the house and around back. So I pulled out from the parking lot and into the narrow driveway until I was just a few feet from the cache. Now we had some protection from the car, the house, and an overhang. I quickly jump out and spotted the cache. I brought it back to the car where I stamped the log sheet and placed it back. WOW! We've been on hikes with the threat of snakes, alligators, scorpions, and now Attack Birds from Outer Space! Let's get outta here! 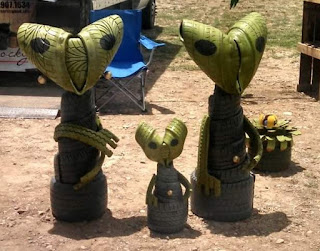 Back over to the main street through town where we managed to find a place to eat. A Mexican restaurant with slow service and just OK food. Nothing special but we were hungry. After lunch, we quickly strolled through the two blocks of festivities for a look. Mostly arts & craft booths with some alien stuff added to the mix. One of the most creative displays was this one guy who turned old tires into alien creatures, plants, and other objects. These were my distant relatives, the Goodyear family, from the planet Yokohama of the Uniroyalverse. On the drive out of town we stopped for gas and had my picture taken with a very patriotic visitor. 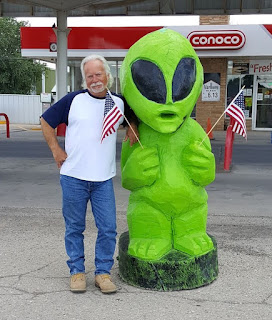 Heading south and back towards home, we stopped in the town of Artesia, NM. I noticed on the drive up a couple of statues along the roadside but didn't stop. But since Carlsbad and Roswell were packed full of tourists, I decided to stop here. The first one pictured below is called "El Vaquero" (the cowboy) and is firing a warning shot from his pistol into the air the warn the "Trail Boss" of the second photo that he has spotted some cattle rustlers coming their way. 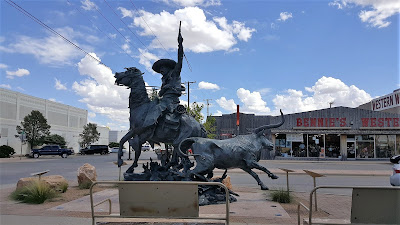 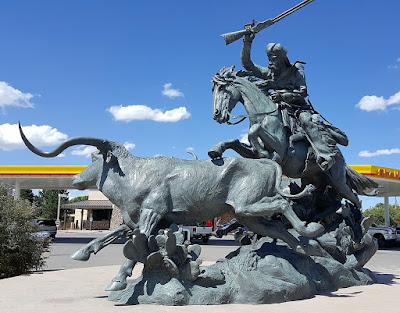 The next two statues were also virtual Geocaches. The first virtual cache (GCGJGK) brought us to the First Lady of Artesia Sallie Chisum, a school teacher, reading a book to kids about outlaw Billy the Kid. 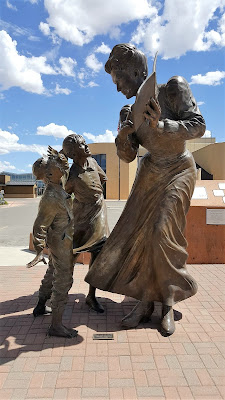 The next virtual cache (GCJC1X) commemorates the first oil well in Southeast New Mexico and the men who made it happen. The two men are John Gray and Mack Chase who were in the industry for many years. Below that is a statue that depicts the first oil well from 1924. 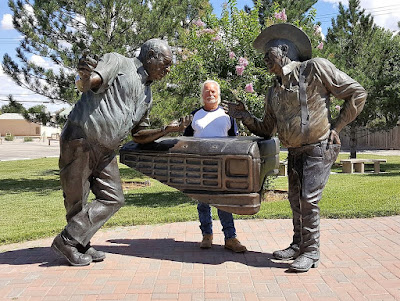 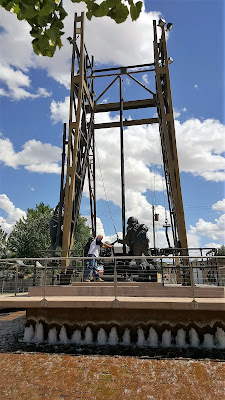 One last Geocaching stop (GC2CR17) for the day at a cemetery near Lakewood, NM. A small cemetery dating back to 1906. By now it was hot and we were wanting to get back, so we forgot to take some pictures.

When we finally made it back down to Carlsbad, we decided to take a different route the rest of the way. We headed east along Jal Highway (128) and happened to pass by these lakes. They appeared to be salt water lakes and then noticed a sign for a salt mine. It's kinda hard to see from the photo and we didn't find any path to get down closer to the lake, but it looks as though that "white sand" around the edges was salt. There were also some parts that had tree stumps and other debris sticking up and they were all white and covered with salt also. 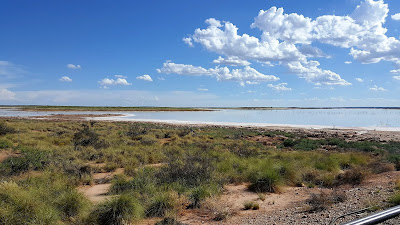 But that was our Geocaching Adventure for the day. Not what we had originally planned, but being spontaneous isn't bad either.
Posted by Mark at 6:35 PM