2016-07-16: Geocaching Through Stone Artwork, a Cemetery, and a Train Robbery

Hello again and welcome back to our next addition to the AwayWeGo Geocaching Adventure blog. Today we're heading to the southeast Permian Basin of West Texas to find Geocaches in both Terrell and Crockett Counties. This will finally complete our Permian Basin Counties and qualify us to log a find on the PBC Challenge cache (GC2MX53).

But before we get to caching, coffee time. No Starbucks though. That's going east. First we drive south down to Ft Stockton and the Clockwork Coffeehouse. This is Candy's first stop before going into work each day. It's a nice little coffee shop with some delicious scones! It's my first time here and now I know why she likes it.

From there we drive south on US-285 towards Sanderson, TX and US-90. Our first two caches (GC32891, GC293FW) in Sanderson involve artwork on stones. These pieces of art displayed in two parks depict the life and history around Terrell County. 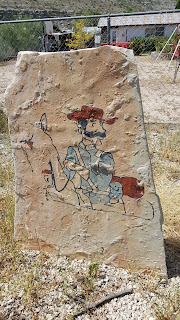 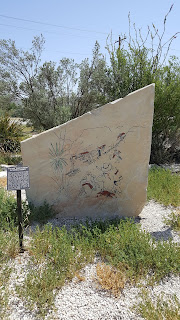 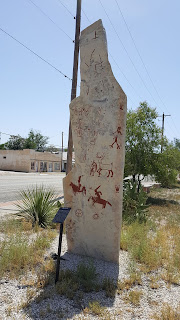 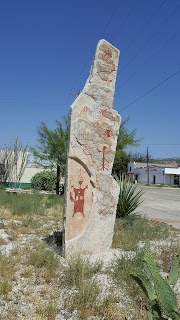 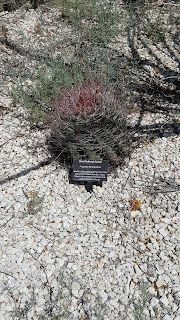 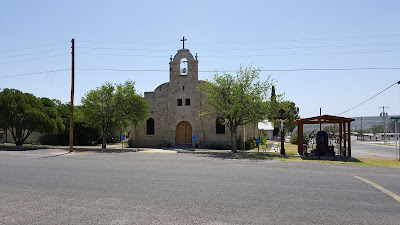 Originally called Strobridge, Sanderson began it's history in 1881 with the construction of the Galveston, Harrisburg, and San Antonio Railroad. With only a few sheep ranchers in the area at the time, it became the midway railroad depot between San Antonio and El Paso. The town began to flourish with the influx of hundreds of railroad workers and the increase in sheep and cattle ranchers as it became a major shipping location for livestock.

When Terrell County was created in 1905, Sanderson became the county seat. Another big boost to the economy came with the invention of he automobile. In 1922, the San Antonio to El Paso Trail became Texas Highway #3 and later US-90, the main route in the south between the east and west. Businesses of all types began to pop up as travelers began to stop here. The community continued to thrive with a maximum population growth of about 3,000 in the 1950's.

On June 11, 1965, Sanderson encountered a devastating flash flood killing 27 people and destroying numerous houses and businesses. Over the years with the boom in automobile travel, passenger railroad travel was on the decline. And in 1970 the Southern Pacific Railroad turned over it's passenger operations to Amtrak and focused on it's freight operations.

And if you're familiar with the animated movie CARS, then you'll understand the next blow to the town came with the creation of Interstate Highway 10 to the north of town. Travelers abandoned the slower pace of US-90 for the express I-10, bypassing the Sanderson.

The final setback came when the railroad moved all it's crew operations further to the west in Alpine which uprooted and relocated many families. Though Amtrak still makes a stop in Sanderson, no passenger facilities were maintained and the old depot was eventually demolished in 2012.

Today only about 900 residence still call Sanderson home. One of the remaining evidence of a past boom town, is the Kerr Mercantile building. Joe Kerr opened his store in 1892 which grew over the years. Also a successful rancher, he eventually built this corner mercantile building in 1927 which sold everything from hardware to groceries to the community. The Kerr family continued to operate this business over the years until the eventual close in January 1999 due to the decline in population. 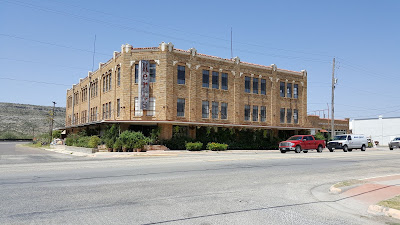 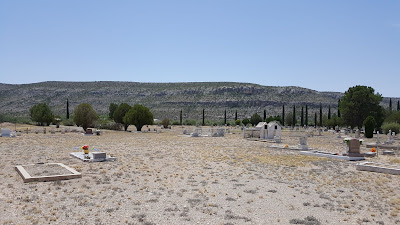 Heading east on US-90 on the outskirts of Sanderson, we stopped by the cemeteries for our next Geocache (GC638RP) and some more history. There were segregated cemeteries. Cedar Grove Cemetery for the Anglo Americans and the Santa Rita Cemetery for the Hispanic Mexicans. As with the more eastern south having segregated whites and blacks, here the Mexicans were segregated not only in the cemetery but once had to sit in the balcony of the old theater among other establishments in town.

One of the notable burials here are for Ben "Tall Texan" Kilpatrick and Ole Hobek. Once a part of Butch Cassidy's Wild Bunch Gang, Kilpatrick and Hobek tried holding up a train at Baxter's Curve in Terrell County on March 13, 1912. A Wells-Fargo employee was able to kill Ole with an ice mallet when he put down his gun to check his bag. He then grabbed the gun, shot and killed the Tall Texan when he returned to the same train car. This was the last train robbery attempt in Texas. They were buried in the same unnamed grave for a number of years and eventually the historical society placed this headstone in 1985. 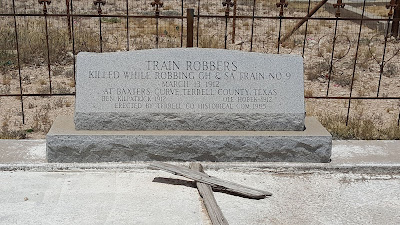 Our next Geocache (GC11C1B) was a quick stop along US-90 in the middle of nowhere. Just a short hike up the hill to get a good view of the area. When we got back to our car and were ready to drive away, a state trooper pulled in behind us to see if we were ok. We said yes, we were just sightseeing and climbed the hill for some pictures. He said it is rare for somebody to stop along this stretch unless they were broke down or needed help. What can I say, we're not ordinary people! 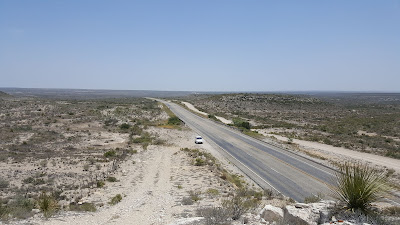 Our next stop didn't have a cache, but it did have a historical sign and a photo opp. The U.S. Government first invested in Terrell County Aviation in 1919, with an airfield built west of Sanderson for the 90th Aero Squadron that flew biplanes for the border patrol. After the squadron relocated, the East Dryden Aerodrome was an active field until 1941. During WWII, American Airlines and the government joined to build a new civilian intermediate and emergency military landing field here. The Civilian Aeronautics Administration supervised construction that ended in October 1943. Later named Terrell County Airport, this facility has also hosted civil air patrol and military training exercises. 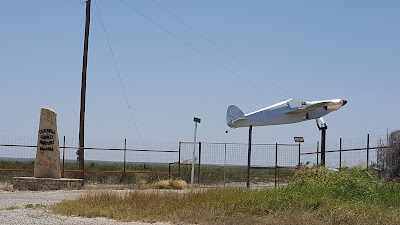 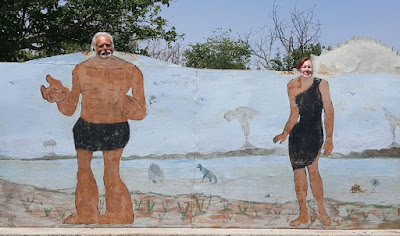 Next on the Geocaching list (GC2JKRG) and heading closer towards home is dedicated to Alley Oop. Located in Iraan, TX, this park highlights one of the towns most famous residents. Cartoonist V. T. Hamlin came up with the idea for the comic strip character while working in the oil boom here in the 1920's. Alley Oop, the strip's title character, was a sturdy citizen in the prehistoric kingdom of Moo. He rode his pet dinosaur Dinny, carried a stone war hammer, and wore nothing but a fur loincloth. He would rather fight dinosaurs in the jungle than deal with his fellow countrymen in Moo's capital and sole cave-town. Despite these exotic settings, the stories were often satires of American suburban life. 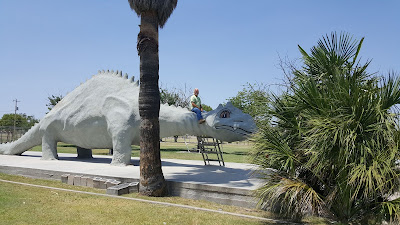 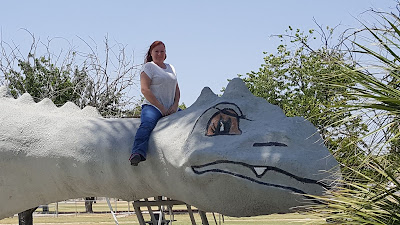 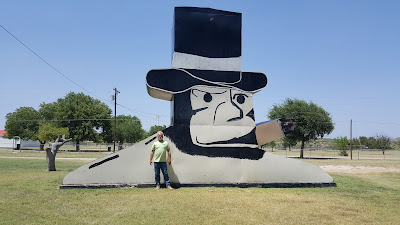 Along the edge of the park there is a blade on display from one of the many wind turbines in the area. These things look huge when they are standing tall, but even bigger when you're standing along side it! Now imaging that when the windmills are standing and turning, there are THREE of these blades rotating. That's some wingspan! 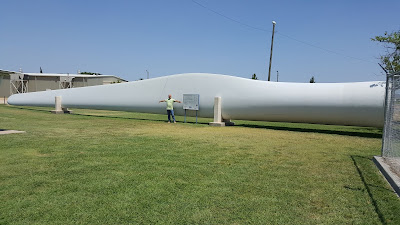 Well that's our day today. Join us again soon for another one of our Geocaching and Sightseeing Adventures. And remember, feel free to share our stories with your Facebook or Google+ friends, leave your comments below to say hi, and select the "Follow Blog" button to keep updated with our travels. Until next time, happy caching!
Posted by Mark at 2:13 PM