Today was a short day in comparison to our other Geocaching Adventures. We only had one goal in mind for today. We had to find a Multi-Cache in order to receive a Souvenir in the Mission GC task. A Multi-Cache is a traditional Geocache that has more than one stage. Typically went you arrive at the posted coordinates you'd find clues that would give you the coordinates to the next stage until you find the final cache container. So I looked up the nearest Multi-Cache that we have not yet found which was over in Odessa and we set out to find it.

So as we were getting ready to leave Monahans this morning, we get an email notification from Geocaching that a new geocache was published 21 miles to the north of us in Kermit, TX. A detour was made heading north to Kermit to try and get First-To-Find (FTF) on the new cache.

We arrived in Kermit to the "downtown" area and the former Bud's TV shop. According to the cache page description, Bud's TV used to be a video rental store as well as selling TV's, VCR's, and the hot new DVD players back in the day. We looked around for about 15-20 minutes before finally giving up. I don't like DNF's on a cache, especially on a FTF.

So we leave empty handed and drive east towards Odessa. Our first stop in Odessa was the Starbucks of course! Then over to Memorial Park and the Buffalo Wallow Multi-Cache (GC4CQA1). A buffalo wallow or bison wallow is a natural topographical depression in the flat prairie land that holds rain water and runoff. Originally this would have served as a temporary watering hole for wildlife, including the American bison. This particular wallow grew rather large due to the number of bison in the area. Plus with the construction of Odessa and this becoming the water runoff location, it's now a scenic lake. There's also numerous statues around the lake which made for a nice walk on a beautiful day! We saw lots of ducks and turtles too. Plus finding two other traditional caches around the lake was a bonus. (GC2MW9G, GC4DBMC) 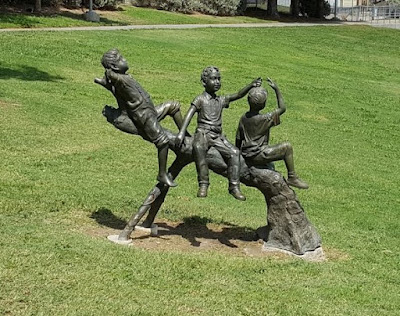 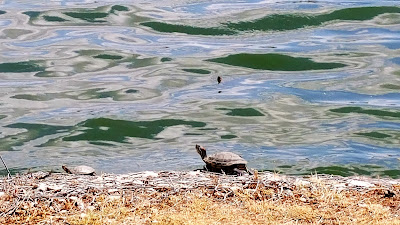 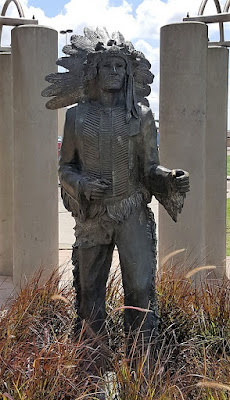 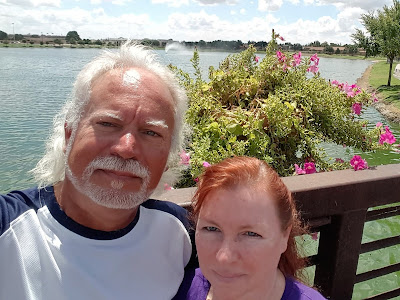 As we were leaving Odessa and headed back to Monahans, the phone beeped again and three more new caches were published back in Kermit! So we took the long way home again. The first cache we came to was called Barry's Lease (GC6Q514). It was another new cache published by a new Geocacher "MedicoJoe." We searched for a few minutes and was coming up empty. So I began expanding the search area. I finally found it about 140' away! I also found a nice clean logsheet where we signed the top for a FTF! WOHOO!!

At that time we see an ambulance pull up and the CO steps out of the vehicle. We had a good chat and he explained that he realized the coordinates were off and he was getting a more accurate reading. He also said he corrected the coordinates for the Bud's TV cache also.

We made two more stops and two more FTF's at GC6Q4W6 and GC6Q51D before heading back over to Bud's TV for another look. With the updated coordinates, we found the cache quickly for a total of FOUR FTF's on the day! Thanks MedicoJoe for placing these new caches.

That's it for today. Like I said, not a big adventure for today but a beautiful walk in the park with a beautiful girl and some FTF's. See ya next time.
Posted by Mark at 8:13 PM