Welcome back! Today we headed north up into New Mexico for a couple more First-to-Finds (FTF's) and a few other Geocaches along the way.

Our first stop was a little town about 20 miles north in Wink, Texas. Known for being the hometown of Roy Orbison from the age of 10. He started his first band while attending high school here. There was a historical marker there at an empty lot which we assumed the house once stood.

After reading the sign we drove to the nearby community park and our first cache (GC6QCTC). Another new Geocache placed by MedicoJoe and another FTF for us. This was a nice park and we walked the entire perimeter to take pictures of the Looney Tunes character statues on display. 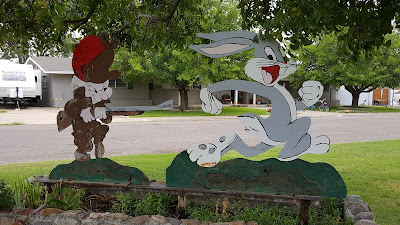 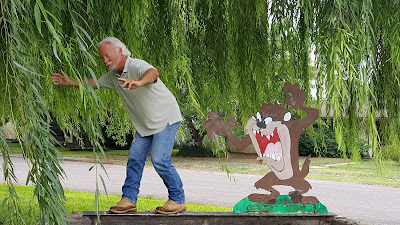 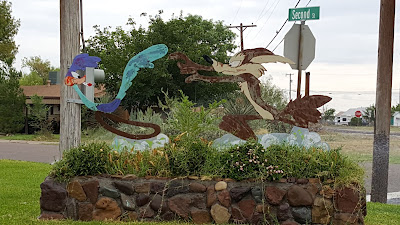 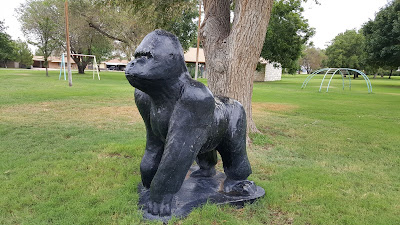 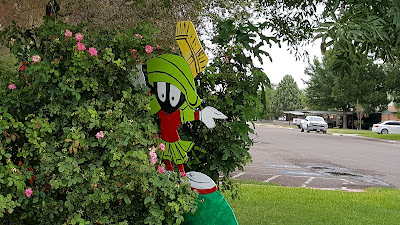 Our next stop was just on the outskirts of Wink. There along the roadside sits a historical marker for the Old Wink Cemetery (GC6QK7Z). The exact locations of the individual graves are not known. The Old Wink Cemetery is the burial site of 26 persons who died during the early days of the oil boom, 1926-1929. Shifting sands over the years have erased all vestige of the graves. According to the old timers in Wink, the cemetery is located in the Monument Draw. Although it is dry now, during the 1950s - 60s it was flooded with oil field runoff water and the area was under water for over 10 years. Several of the Wink residents remember fishing and hunting here. There are no current signs of the cemetery today. It is part of a local ranch.

As for the Geocache, we searched for about 15-20 minutes but came up empty. We found the rocks from the hint given, but no cache container. I believe it was too close to the historical marker and muggled by someone stopping to read the sign. (As a side note, we did find the cache two days later after the MedicoJoe replaced and moved further away from the sign. Another FTF!)

Continuing north for a few more miles, we reached the state line between Texas and New Mexico and our next cache (GC6QK3N). Another new cache placed by MedicoJoe and another FTF!

The next town was called Jal, NM and our next cache was at the Jal Cemetery (GC6QK3B). In the 1880s, several brothers brought a herd of cattle to Monument Draw, six miles southeast of the present city. The cattle were branded with the initials of the previous owner (John A.Lynch) and the cattle soon came to be called the JAL Cattle. The men who worked the herd referred to them as the Jal cowboys. In time the name became synonymous with the settlement itself. Though after finding the Geocache, a quick walk around the cemetery and we didn't notice any old graves so we didn't take any pictures. But we did get another FTF!

Closer into the center of town was a community park and another FTF (GC6QK43).

Driving SW on Hwy 205 a few miles to a town called Bennett, NM was our next Geocache (GC2H0NE). This next cache was a piece of history which goes to show how government usually makes matters worse and not better:

Here are the ruins of a whole way of life, apparently gone forever. This “camp” was started in the middle 1930’s when the natural gas boom sprouted out of the oil boom. In the 1940’s the pipeline system was finally becoming part of the infrastructure we know today, but even then you could drive from Jal to Odessa and beyond at night just by the light of the flares that were burning off the natural gas so they could pump the oil. Then the natural gas became valuable and furnaces, stoves and even “ice boxes” (refrigerators to you newbies) were powered by natural gas.

El Paso Natural Gas Company Jal #1 plant was built to collect, treat, and pump natural gas all the way to California. To support the plant, houses were built for the employees and their families. An instant middle class was formed by the camps that sprouted all over the oil fields. Other companies like Phillips, Shell, and Texas-New Mexico quickly joined suit. Jal, New Mexico was then advertised as the “Gas Capitol of the World”. More natural gas flowed through these companies’ pipelines here than anywhere else in the world. 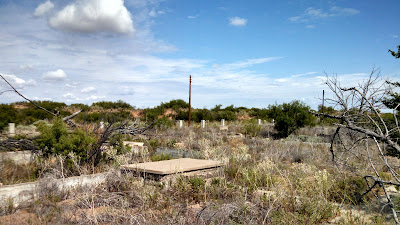 The plants were unique communities. Every employee had a house as a benefit of employment. Every house had indoor plumbing, free water, free electricity, free garbage collection, and of course, free natural gas! It was a Company Camp. The plants had to make their own electricity to run, and the camps benefited. The plants had to obtain their own water and the camps benefited. The houses were built and owned by the companies because the plants ran 24/7 and the workers were conveniently nearby working shifts. The kids that grew up in the camps virtually lived in a large family setting. Everybody knew everybody and lived in a homogeneous mix of mothers, fathers, brothers and sisters where we learned to get along. We still get along and call ourselves Camp Brats.

The tax structure of the State, at the time, benefited Jal, New Mexico. The oil and gas royalties off the School Lands in the area went directly to the local schools. Jal had a great school and great teachers! Virtually every Camp Brat had at least an opportunity to go to a college or university, and most of us did. Life was good, life was great! What could go wrong?

The “Government” is what went wrong. Local, State and Federal government intervention went wrong. Free houses? Can’t have that, there aren’t any taxes paid. Free water? Can’t have that, there aren’t any taxes paid and it is just not fair to everybody else, so they said. Same for the electricity, the utility companies just weren’t getting their cut. State school land taxes were shifted to the general fund and Jal lost most of its school funding to the northern population centers of the state.

By the 1970’s our way of life was falling apart. By the 1980’s the camps were being broken up and the houses torn down and/or moved away, lock, stock and barrel. What you see left here 20 to 30 years later is government’s handiwork.

Continuing north again going through town we came to our next Geocache which was a multi-cache (GCJ77H). It also brought us to this huge work of art. "The Trail Ahead" was sculpted by local artist Brian Norwood and dedicated in September of 2000. The statues consists of seventeen metal silhouettes stretching for approximately 400 feet. The largest measures over twenty feet tall! They honor the ranching heritage of Jal, New Mexico. 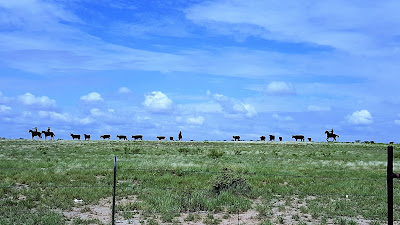 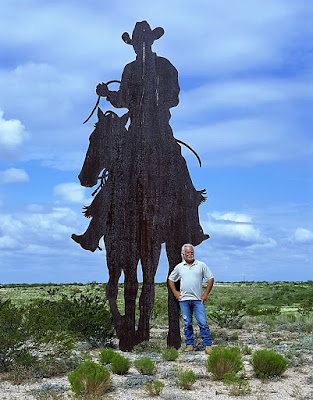 Circling back around towards the south and back towards home, we come to our next cache (GC2AB0) and the corner of New Mexico and Texas. The COMPROMISE OF 1850. The results of the Mexican War (1846–48) brought Texas into serious conflict with the national government over the state's claim to a large portion of New Mexico. The claim was based on efforts by the Republic of Texas, beginning in 1836, to expand far beyond the traditional boundaries of Spanish and Mexican Texas to encompass all of the land extending the entire length of the Rio Grande. Efforts to occupy the New Mexican portion of this territory during the years of the republic came to naught. 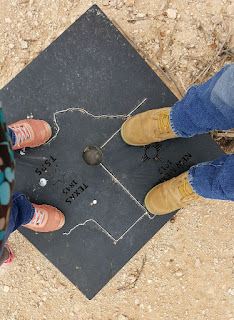 After numerous unsuccessful attempts to resolve the issue, Senator James A. Pierce of Maryland introduced a bill that offered Texas $10 million in exchange for ceding to the national government all land north and west of a boundary beginning at the 100th meridian where it intersects the parallel of 36°30', then running west along that parallel to the 103d meridian, south to the 32d parallel, and from that point west to the Rio Grande. The bill had the support of the Texas delegation and of moderate leaders in both the North and South. Holders of bonds representing the debt of the Republic of Texas lobbied hard for the bill, for it specified that part of the financial settlement be used to pay those obligations. The measure passed both houses of Congress in the late summer of 1850 and was signed by President Fillmore.
This square marks the corner that divides the two states. While I'm standing on the New Mexico side, Candy is standing in nearby Texas! Maybe not as cool as Four Corners, but still cool.

Our last Geocache of the day (GC69XEN) was at the Sand Hills. Mapped by U. S. Government, 1849, for gold seekers and settlers. Known earlier to Indians and many Spanish explorers. A 100-mile belt of sand in Winkler and 4 other Texas counties and in New Mexico. Width varies from 3 to 20 miles; outer dunes are held by dwarf oaks. Water at 2' depth supports willows, cottonwoods, and a plum thicket. (The plums gave food to early settlers.) Many dunes more than 70' high. Heavy, shifting sands a natural barrier to travel. Campsite and game reservation for Indians. Now part of expansive cattle ranges and rich oil fields. Being from Florida when we saw this much sand it usually had a large body of water on the other side. 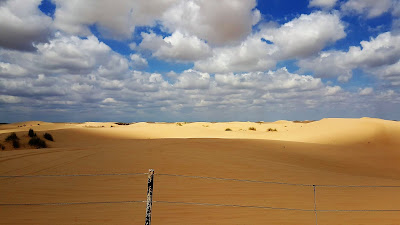 So that was today's Geocaching Adventure. We hope you've enjoyed it and maybe learned something new. Perhaps it has also inspired you to get out and explore the area around you.
Posted by Mark at 4:50 PM