It's that time again. Another 360+ mile Sunday drive from Killeen to Monahans in West Texas. That means more Geocaching to break up the long drive. So let's get started...

My first stop was in downtown Lampasas at a Geocache called "What's with all the puppets?" (GCJC9Z). It was located out on the front sidewalk of this German Restaurant. Inside the restaurant are a bunch of those Marionette puppets hanging from the ceiling, but the place was closed on a Sunday morning so I couldn't enter.

Then I drove to the south side of town and arrived at the Santa Fe Center (GC15R9R). Located inside the shopping center parking lot just happens to be the oldest cemetery in Lampasas County. The Cook Cemetery was established as a pioneer community graveyard in the mid-1850's. The first marked burial here was that of Rebecca Hughes in 1854. The cemetery is named after Arkansas natives William M. and Cynthia Cook who moved to Texas about 1856 and bought the land containing this graveyard in 1861. No recorded burials occurred here after that of J. S. Brown (d.1873) due, it is believed, to major flooding here in 1873. The cemetery has been altered by highway and business development. It was deeded to the Lampasas County Historical Commission in 1978. 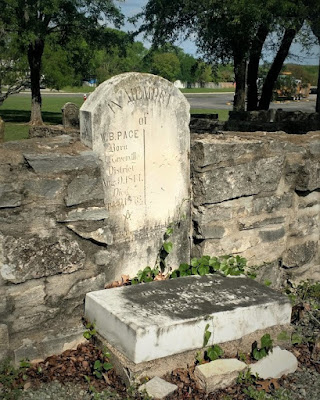 Making up some ground, I continue all the way through Brady where I pick up US-87 west towards San Angelo. On US-87 I find my next two geocaches near the ghost town of Pasche, Texas (GC1NVHZ, GC1JH0X). The Pasche community had a post office from 1907 until sometime after 1930. In 1908 promotional literature for the county cited Pasche as one of five Concho communities having a windmill. Pasche became a station on the Gulf, Colorado and Santa Fe Railway sometime around 1912, when a line was completed from Lometa (Lampasas County) westward to Eden.

In 1914 Pasche had one gin, two general stores, and a population of fifty. From 1925 until 1967, the last year for which a figure is available, Pasche reported a population of twenty-five. In 1936 the community had a school, a church, and a seasonal industry. In 1940 the school, which encompassed grades one through seven, had two teachers and an average daily attendance of eighteen. By 1955 the Pasche school had been consolidated with the Melvin (McCulloch County) school district. By 1970 only a few scattered buildings remained in the vicinity. The only thing I saw were a couple of farm houses.

Driving several miles west on County Road 3034, I arrived at Sudduth Cemetery (GC1NVJ2). The Sudduth Family Cemetery contains only four graves ranging from 1917 to 1945. I couldn't find anything else on this family or the neglected cemetery. 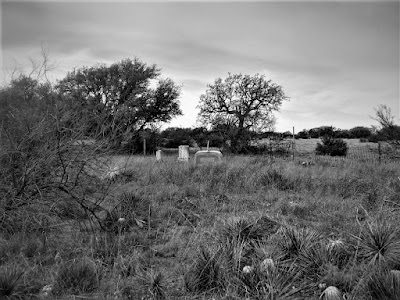 Getting closer to San Angelo, in the small community of Vancourt, I found my next cache (GC130FX). Vancourt is a farming and ranching community on U.S. Highway 87 twenty miles southeast of San Angelo in Tom Green County. In 1908 the community postmaster estimated the Vancourt population as 125. The first business at the community was a stage stop run by William C. and Ida Dickey 1½ miles east of the present site of Vancourt. W. S. Kelly, establishing a mail route for the El Paso Mail Company, applied for the first post office. He named it in honor of his new bride, Mary Ann Van Court.

In 1908 Calvin J. York, Jr., built a general store on the north side of the highway. Until it closed in the 1970's, it remained the only store in the community. The White Swan School, originally 1½ miles northwest of Vancourt, was moved to the community in 1907, on the south side of U.S. Highway 87. The Works Progress Administration in 1937 built a new brick schoolhouse that was used until 1940 (pictured below). A cotton gin had been built in the 1920's west of the school site; the gin continued to operate in the same location in 1988. At that time, businesses in the area near the townsite included another cotton gin, a mill, and two grain-elevator companies. 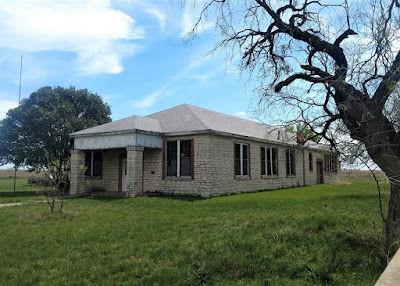 My next one in San Angelo gave me a bit of a chuckle. My Froggy Friend (GC6Q49M) was made from used tires and located outside a tire shop. 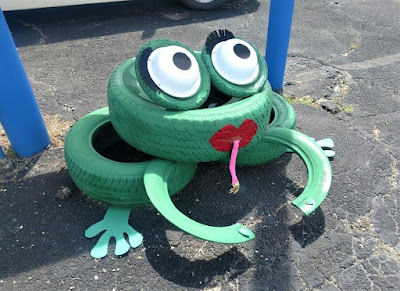 My final five geocaches were quick roadside stops along US-87 between San Angelo and Sterling City. They were: Roll out the Barrel (GC1Y1W7), Body Snatchers (GC1Y2JV), Flying Lone Star (GC513QK), EZMLT (GC5BKYX), and Johnny's Cache (GC5QR80).