Welcome back to AwayWeGo's Geocaching Adventure Blog. For those that don't know, I started using AwayWeGo back in 2005 when my sons were 8 and 10 years old. At the peak of the real estate boom, we sold our house and bought a motorhome. For the next 11 months we just traveled the country from Florida to Maine to California up to Alaska. You can read about that adventure by going to AwayWeGo.US. Click on the "Our Adventures" in the menu for the archives. The AwayWeGo.US is also my Geocaching name. 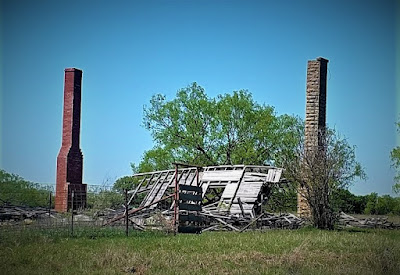 OK, so much for reminiscing. Today's 360+ mile Sunday drive from Killeen back to Monahans, Texas, had me stopping by a couple cemeteries, an old church, a roadside attraction photo opp, the geographic center of Texas, and has Christmas died?

My first stop was at the Copperas Cove Cemetery at a cache called "Nineteen Forever" (GC1G31T). The hider has a brother buried here who died in 1989 at the age of nineteen. 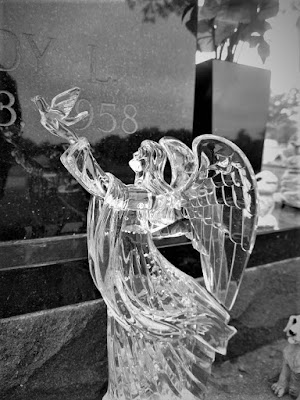 One more before leaving Copperas Cove. A quick guard rail cache called Keyless Entry (GC11JGE), but not what I was expecting.  It kinda threw me off a little. But then it finally hit me like "what's the purpose?" Duh! I guess I should have reconsidered the name of the cache. A round rusty magnet covering the key/cache hole. Nicely simple creative geocache. 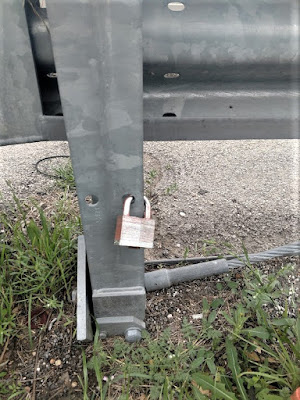 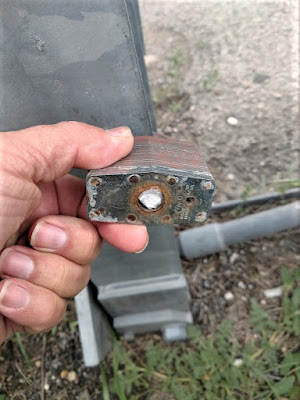 Continuing on to Lampasas, Texas, there was a new puzzle geocache (GC7MJC7) that had not yet been found after three days. So a chance at a First-To-Find! Most puzzle caches I take a quick look then ignore because they can be so complicated you need rocket scientist to decode them. But this one wasn't one of those. I arrived at the given coordinates and looked around for some numbers in the line of sight. Getting the information needed, I input the new coordinates which took me over to Hancock Springs Park. At the entrance to the park is the Worlds Largest Spur. After taking a few photos, I found the cache and a nice clean logsheet! YEA a FTF! 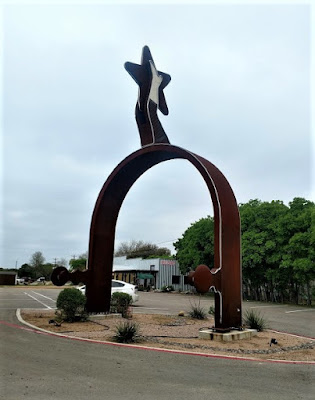 Along the way to my next geocache, I found myself on some very rural backroads of Texas north of Richland Springs in San Saba County. While enjoying the drive, I noticed a sign pointing down a side road that said cemetery. Hmmm... so I don't recall another geocache being along this route and I don't have cell phone service to verify. But I gotta go investigate no matter what.

A short distance later, I find myself in the Bowser Community. About 1858 the Abel Bowser family settled at a large bend in the Colorado River about 3 miles north of this area. The developing village, school and cemetery became known as Bowser Bend and by the late 1880's included a cotton gin and store. Due to river floods, Paul Varga donated land at this site for a chapel and cemetery in 1890. In the early 1900's J. T. Martin sold town lots and deeded land for a school one-half mile east. The town of Bowser relocated, but the closure of the post office, gin and school caused it to decline in the 1940's. Recent population has it around 20.

I spotted this old homesite that had fallen in on itself. The only thing that's held up are the two chimneys at each end of the house. I've seen a few of these towering chimneys with nothing else around. In Odessa, Texas, there's even one at the edge of a shopping center parking lot. The only remains of an early pioneer homestead. 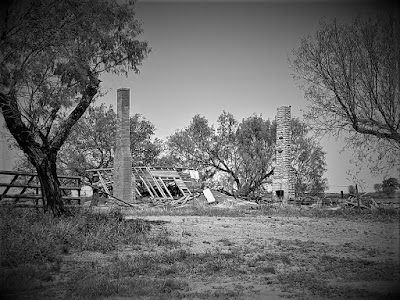 Then there's this small church that looks like it's had some additions and improvements over time. The lower right corner of the stone building has a plaque that says: "The Methodist Church, 1941, D. G. Hardt, Pastor." 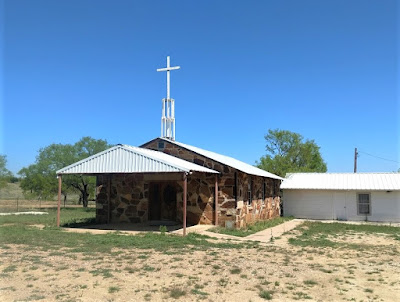 Finally, I arrived at the Varga Chapel Cemetery which brought me down this way. This is the cemetery I mentioned above on land donated in 1890. Since there wasn't a geocache here already, I decided to hide one myself. Walking around through the headstones, I was looking for something of interest and a reason to highlight this cemetery. Then there it was! Of all the many cemeteries I've been to, I don't recall ever seeing this family name. I found a spot to hide the geocache container and "Bah Humbug! Christmas is Dead!" was created (GC7MRW5). 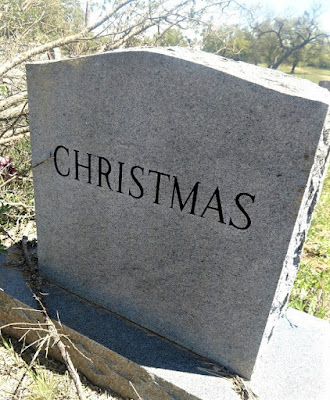 Remember as a kid when your mother
used to tell you not to eat the seeds
because trees would grow in your stomach?
Well... 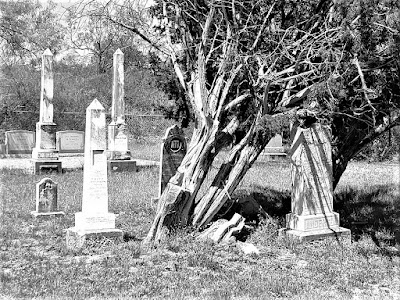 OK, time to get back on track continuing on towards the geocache (GC5PFE3) I was headed for! I thought this next one was going to be cooler than it turned out to be. What I did find was a historical marker. It read as follows:

"Five miles northwest is the geographic center of Texas,..." WAIT! WHAT? FIVE MILES NORTHWEST!? So as it turns out, this marker is NOT the geographic center. The TRUE center happens to be located on private property. So NO marker to visit there. Oh well. Here's the rest of the text you'll read on this historical marker just in case it might appear on a Jeopardy question or trivial pursuit.

"Enclosed within the 4,137-mile perimeter of the state are 267,339 square miles or 7.4 per cent of the nation's total area. Fifteen of the 50 states could be readily accommodated within Texas' borders--with more than 1,000 square miles left over. Brewster, in southwest Texas, is the largest of the state's 254 counties with 6,208 square miles, an area larger than the state of Connecticut. Smallest county is Rockwall in northeast Texas with 147 square miles.

"Texas elevations rise from sea level along the 624-mile coast of the Gulf of Mexico to 8,751 feet atop Guadalupe Peak in the Guadalupe Mountains. Altitude at this point is 1,545 feet. Terrain varies from the subtropic Rio Grande Valley to the trackless Great Plains, from the lush forests of East Texas to the rugged Trans-Pecos region where mountain ranges thrust 90 peaks a mile or more into the sky. But perhaps nowhere are Texas contrasts more pronounced than in average annual rainfall: from more than 56 inches along the Sabine River, nearly as much as Miami's, to less than 8 inches in the extreme West, as little as Phoenix's." 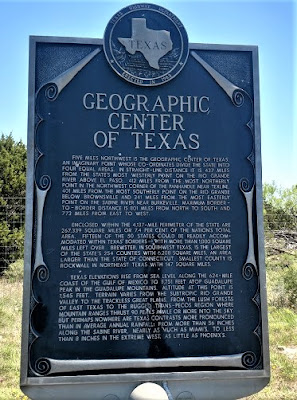 By now it's after 1PM and I still have almost four hours of drive time plus several more potential FTF's to get near Midland. So I quickly drive through San Angelo all the way to Sterling City. I stop at the DQ to finally get a late lunch and grab the geocache at the park across the street (GC5132R). And well since I've stopped anyway how about another quick one just 2 blocks away (GC52CRT).

Just southeast of Midland and I arrive at "What Am I Doing Way Out Here?" (GC7MPT9), where I find a nice clean logsheet at 5PM. WOHOO a FTF!! I looked up the cache owner and saw she had some more new caches out here in this area.

Now it came down to: do I go after 6 more FTF's in the wrong direction towards Big Spring OR go west towards Monahans for only one more FTF? It had been a long day of driving. So westbound it is to the "Nice Little Pit Stop" (GC7MPT5) at a new Dollar General store for my final FTF at 6PM.

Another hour later and I finally make it back home to Monahans. Thanks for riding along with me. See you next time...
Posted by Mark at 9:52 PM