2018-09-03: Geocaching Through South Texas History From The Alamo to the Rio Grande Valley

Hello and welcome back to another recap of AwayWeGo's Geocaching and Exploring Adventures. On this Labor Day Monday, I drove down from Killeen in Central Texas to Falcon Lake in the Rio Grande Valley. There were a lot of new places to see, so let me get started.
After nearly an hour of driving, I made a stop in south Austin for gas, Dunkin Donuts, and a quick urban geocache (GC79YHY).
From there I proceeded down to San Marcos in the next county over. Hays County was founded in 1848. The courthouse building isn't the first one in the county. The current one was built in 1909. I can't say too much more about it because it's a virtual geocache (GCG9JY) and I don't want to give away any answers. 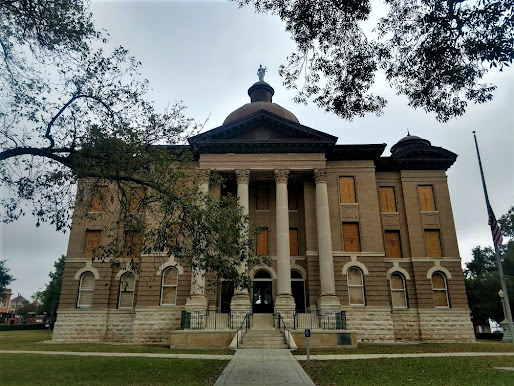 The next county to the south is Guadalupe County. There I found another virtual geocache (GCGAQQ) in the town of Seguin. That took me to a house called Sebastopol. This Greek Revival house was built in 1854-56, with reinforced load bearing walls of cast-in-place limecrete, an early form of concrete made of lime, sand, and gravel. One of many concrete structures built in Seguin, this is an important surviving example of early concrete technology in the southwest. 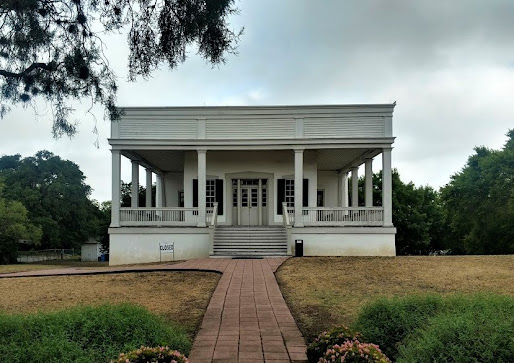 Not too far away was the Juan Nepomuceno Seguin gravesite (GC6YTN1) for whom the city was named. Born in 1806, Juan assembled Mexican Texan troops and fought in the 1835 Siege of Bexar. He provided horses and aid for troops of Col. William B. Travis. Further aiding as courier during siege of the Alamo. Juan Seguin commanded Company A Cavalry 2nd Regiment during San Jacinto victory and pursuit of the Mexican Army remnants following San Jacinto battle. After a career in politics, Juan Seguin died in 1890 in Nuevo Laredo, Mexico. His remains were returned to Seguin. 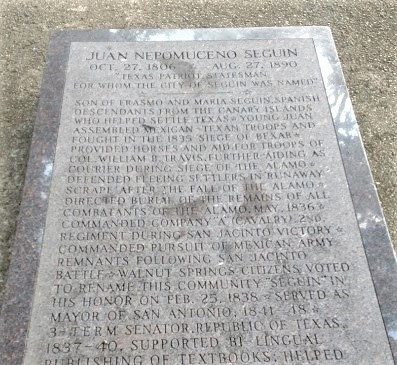 Moving on down to Karnes County, I arrive at my next geocache (GC4K1MF). The second Polish colony in Karnes County, the village in this area grew out of a small settlement known as St. Joe and was formally established in 1873. At times the priest at Panna Maria would conduct services at St. Joseph School in what would become Czestochowa. The "Mother Colony" church at Panna Maria was destroyed by lightning in 1877; Czestochowa settlers decided to build their own church. This was the subject of much controversy among the Polish pioneers of Karnes County. Anton Jarzombek (1836-1922) and Frank Mutz (1814-1891) each donated land for the church. Area residents contributed their labor to build the eighty-five by forty foot church with Gervase Gabrysch (1830-1904) as contractor. 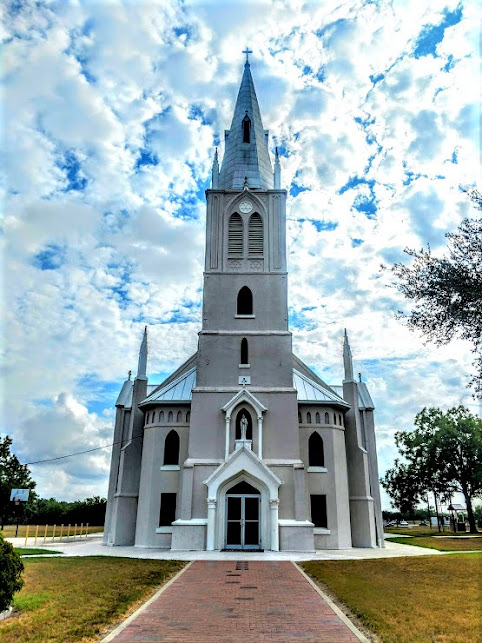 Bishop Anthony D. Pellicer blessed the church on February 10, 1878. Father W. Pelczar was assigned as the first pastor that September. As a sign of their reconciliation, the parishioners from the newly rebuilt Panna Maria church presented the new parish a large painting of the Virgin Mary of Czestochowa, the Patroness of Poland. The two congregations often shared leadership in the ensuing years. The Cestohowa church (adopting the Americanized spelling of the community) thrived into the 20th century.
In the 1930's the church underwent intensive additions and remodeling. Though the original walls remained, the roof was completely removed and the ceiling raised. The north and south wings were added and the steeple was increased in height. In 1998, the church celebrated its 125th anniversary. At that time, the parish consisted of 380 members. The Nativity of the Blessed Virgin Mary Church continues in the traditions of its founders. 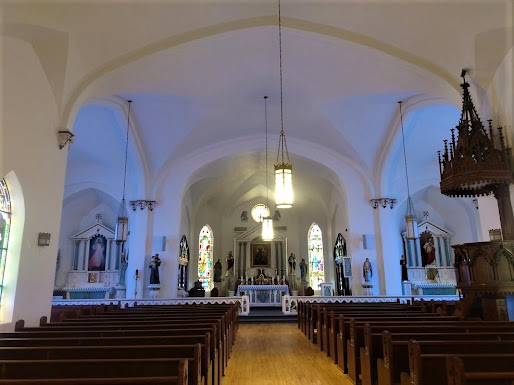 Bee County was next on my list. I drove down to this town called Normanna, Texas. The area had been a Mexican land grant back in 1831. In 1874 it was named Walton Station after Sheriff D.A.T. Walton.

Norwegian immigrants moved into the area in 1893, and formed the nucleus of their colony just 2 miles from Walton. When the postal authorities rejected the application for a post office under the name Walton, Normanna was submitted and accepted. The name loosely translates as "the place of Norsemen" but closer to the true meaning is "far North." Seeing that's where they were from, the name was appropriate.

Families descended from the original Norwegian settlers still live in the area. Normanna has a museum in a building that has served as ranch headquarters, a hotel and a residence. The town thrived for years, but then declined after a series of fires and the advent of the automobile. This is that building today. 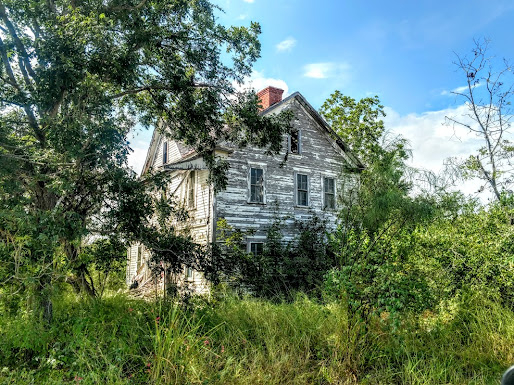 The geocache (GC10AXF) was located on the west side of town at the Medio Creek Bridge. The bridge was the idea of Viggo Kohler, a man who later built the large Viggo Hotel in Hebbronville (1915). He petitioned the Bee County Commissioners to accept bids in June of 1897. The bridge arrived in kit form and was assembled by the Austin Brothers Bridge Company. It has long since been decommissioned and slowly being reclaimed by nature. 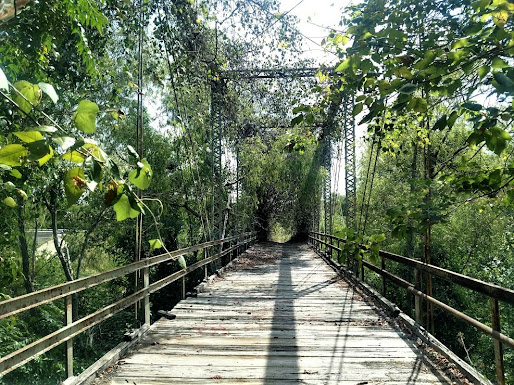 Continuing south into the town of San Patricio, Texas, I went to my next geocache at the Old Cemetery On The Hill (GCMDMV). This cemetery is believed to have been used for generations by Indian tribes and Mexican settlers who lived in this area previous to Anglo colonization. Following the establishment of San Patricio de Hibernia in , the colonists continued to use the old cemetery on the hill. 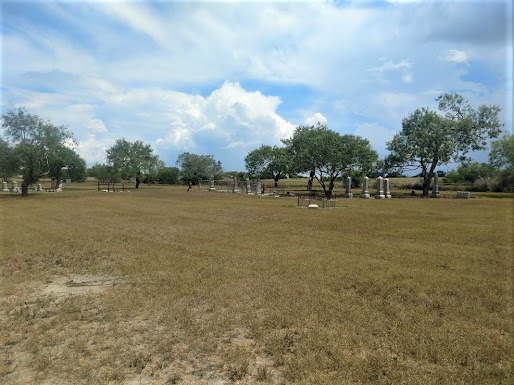 According to local oral tradition, early graves in the cemetery were marked by wooden crosses and stones bearing Spanish and English inscriptions. Among those interred here are Lt. Marcelino Garcia who was killed at the Battle of Lipantitlan in 1835. Also buried here are soldiers who died in the Battle of San Patricio on February 27, 1836; James McGloin, who's grave was never marked; victims of diseases such as scarlet fever; men killed fighting duels; and many early settlers and their descendants.
After a new cemetery was consecrated at San Patricio in 1872 (GC6C4ZE), the Old Cemetery on the Hill was used infrequently. The old cemetery was neglected for many years until restoration efforts were begun in the 1960's. Some tombstones where lost or destroyed over the years. But the historic graveyard is now maintained. 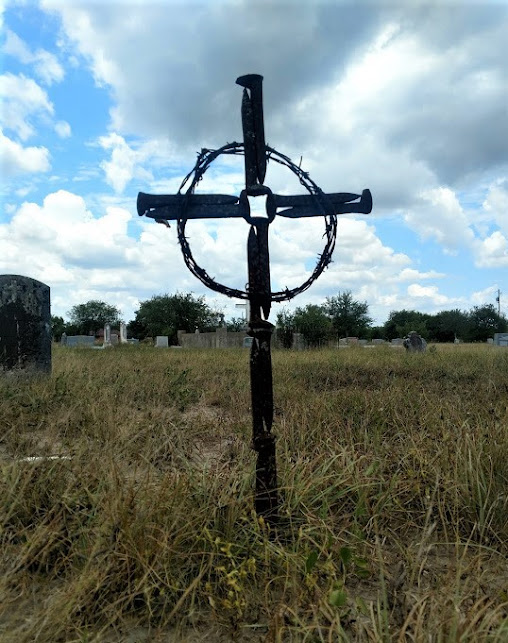 Passing through the town of Bluntzer, I saw this old schoolhouse. The first Spanish land grant awarded in what is now Nueces County was the Casa Blanca Land Grant. Granted in 1798 by the Spanish government to Juan Jose de la Garza Montemayor (1765-1816) and his three sons, Juan Manuel, Jose Perfecto, and Jose Agustin, it was located between Penitas Creek and the Nueces River. Originally called Penitas Grant, it consisted of 70,848 acres, or sixteen sitios of land.

The school for the town was opened in the 1870's, but flooding by the hurricane of 1919 necessitated its relocation. Justina Bluntzer, daughter of Nicholas, donated the land for the school. This final school building was constructed in 1939. The school held classes until it was consolidated with the Banquete ISD in 1971. 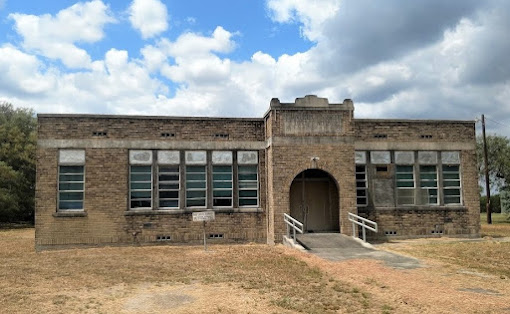 My next geocache was at the Cemeterio De La Luz (GC1CXD6). I couldn't find any information on this cemetery other than there's over 350 burials here dating back to 1926. 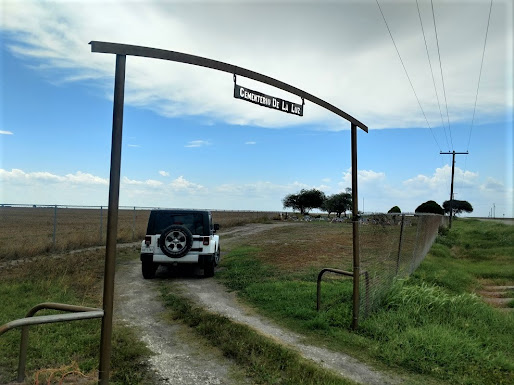 Still working my way south, I stop at the Restland Memorial Park cemetery for my next two geocaches (GC2N9WG, GC7TGWT). Located in Bishop, Texas, the town was established in 1910 by F. Z. Bishop on land he had purchased from the Driscoll Ranch. A businessman from Corpus Christi, Bishop dreamed of building a model town on the prairie. He planned, designed, and managed the construction of the townsite. He died in 1950 and was buried in Restland Memorial Park. 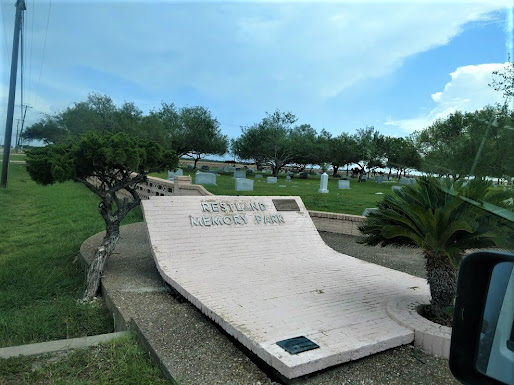 My final geocaching stop brought me to the Pedro Garza Zamaora Cemetery (GC23ZNM). There's only 140+ burials dating back to 1904. This row of statues stood out the most. 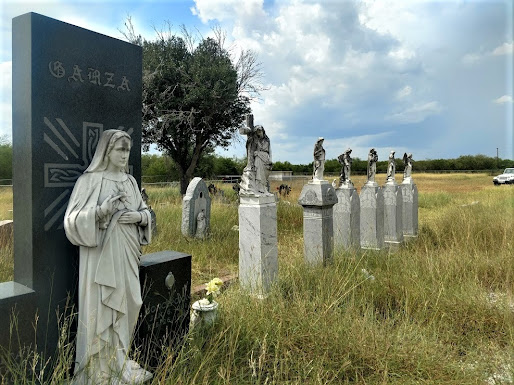 Well that's it for this days adventure. There's a lot of South Texas / Mexican history to be learned on this drive. We'll be discovering that over the next few months while I work on this new wind project. Until next time, happy caching!
Posted by Mark at 5:48 AM