Welcome back to the Rio Grande Valley in South Texas on a wet Wednesday. It's still too muddy at the jobsite to work. So it looks like another day of Geocaching! And I've got just the thing. I've been working on completing my Texas counties. There are a total of 254 counties in Texas. I need two at the very top of the panhandle, two north of Dallas, and there are four left here along the Gulf Coast.
I quickly get underway across the state, I've got a lot of driving to do today. My first stop is a geocache (GCQJCF) at a historical marker in Matagorda County. Camp Palacios was established on this site in 1925 as the summer training camp for the Texas National Guard's 36th Division, which had formed during during World War I as the 36th Infantry. The division, which became the 36th Infantry Division during World War II, trained here each summer, 1926-1937 and 1939. Located on the Turtle and Tres Palacios Bays, the land was donated by Palacios area citizens. More than 6,000 guardsmen arrived in July 1926 for the first training session. In 1930, the camp was renamed for Major General John A Hulen (1871-1957).
On its 1,200 acres, the new camp supported the largest concentration of troops for field training in the United States Military, with facilities for several thousand inhabitants. In 1940, the War Department leased camp Hulen; first to undergo Anti-Aircraft training were National Guard units from several states. By 1941, the City of Palacios suffered a housing shortage that was alleviated by Government housing for military families and civilian workers near Camp Hulen. After extensive development, the camp had facilities for 12,000 military personnel.
Basic training continued until early 1944, when U.S. Soldiers were removed. German prisoners of war, guarded by a small contingent of U.S. personnel, were housed here from 1943 to 1945. In 1946, the War Department returned Camp Hulen to the National Guard, for whom it had become too small. Buildings were slowly dismantled and sold. In 1965, the property was sold jointly to a group of Palacios citizens and a development company.
Next stop in Port Lavaca, Texas over in Calhoun County, I come to a virtual geocache (GC84D1). Constructed in 1858 this three-story hexagonal lighthouse was originally located in Matagorda Bay, at the southern tip of Half Moon Reef. The beacon served as an aid to ships trading in Port Lavaca and nearby Indianola. The beacon was in service till 1943 when it was moved to Point Comfort, then moved to it's present site in 1979. The beacon was restored as a community project and placed on display. 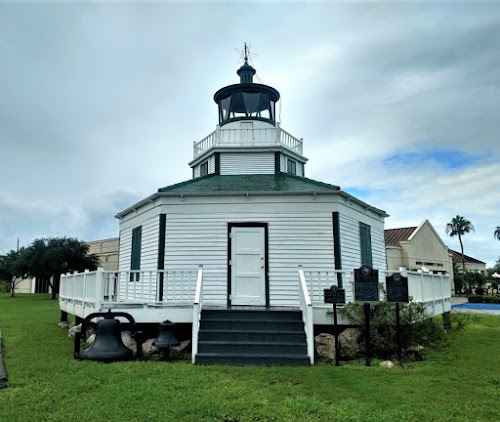 Also in Port Latava is another virtual geocache of historical value (GCG8JQ). At the VFW Post 4403 is a Vietnam War Memorial. This Army helicopter saw action in Vietnam and Desert Storm. It has the capability of carrying two tons of ammunition to fire from machine guns, cannon and grenade launchers. It had the distinction of being the most heavily armed helicopter in Vietnam action. This swift and hardy craft became one of the most celebrated tools of the Vietnam War. 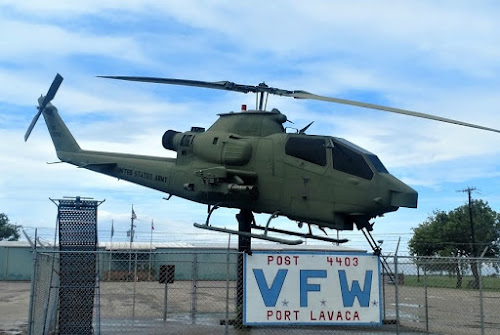 The last virtual geocache here was at Indianola, Texas (GCDFB7). Of the many ghost towns of Texas, none lived longer, none thrived better, none died as tragic a death as Indianola, on the west shore of Matagorda Bay near where Rene Robert Cavelier, Sieur de la Salle, is thought to have landed in 1685. Many colonists, including the German immigrants led by Prince Carl of Soms-Braunfels entered Texas at this natural port. It was an important military port, a railhead, and a diplomatic center where commissioners of Mexico and the United States met to establish boundaries proscribed by the Treaty of Guadalupe Hidalgo. The port exported cattle to the East and Cuba. In 1875, at the heights of its prosperity, population 6,000, a tropical storm took toll on lives and property. After a second storm hit a year later Indianola was abandon. Now only a fishing and vacation community remains of this famous Texas city. 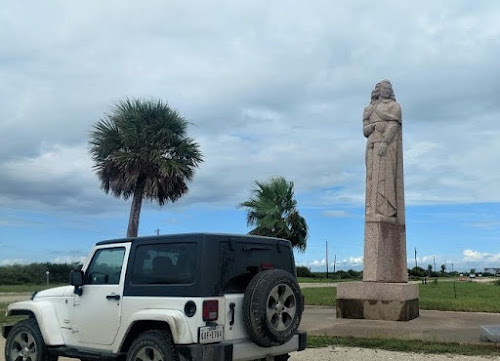 Next up in Refugio County was my next geocache at the Tivoli Cemetery (GC4NHZ7). Captain Newton Cannon Gullett who founded Tivoli, Texas on his ranch of the same name. Gullett erected a cotton gin, store and a boat landing on the Guadalupe River to export cotton and receive supplies.
The town was first platted in 1907 by Preston R. Austin and a post office was granted in 1912. The St. Louis, Brownsville and Mexico Railway was extended through Tivoli (to the terminus at Austwell) that same year. The town was re-platted in 1913 - doubling the size of the town from five blocks to ten. Austin donated the town's first church and school. Hurricanes hit Tivoli in 1919 and 1942, but the shallow bay, high bluffs and slight population spared the community from obliteration. The town reached its population zenith in 1928 with a population of 700. The next photo is one of the old abandoned houses in the town. 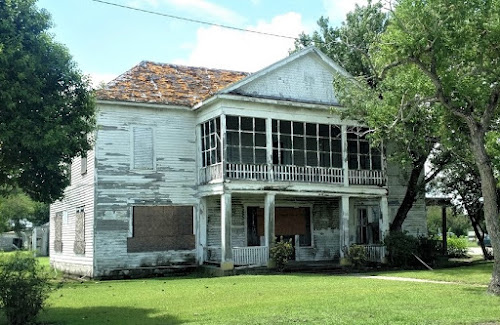 Continuing to make my way back, I enter into Aransas County and the historic Lamar Cemetery (GC188TK). According to the historical marker, this burial ground originally served members of the Lamar Community. Founded by James W. Byrne (d. 1862), a native of Ireland and a veteran of the Texas Revolution, it was named for his friend Mirabeau B. Lamar, President of the Republic of Texas from 1838-1841. The earliest grave is that of Patrick O'Connor (1822-1854), a bookkeeper for Byrne's business operations in New Orleans. The town of Lamar ceased to exist by 1915 and the cemetery was neglected until the 1940's when it was restored through efforts by the family of John Henry Kroegor, Jr (d. 1944). 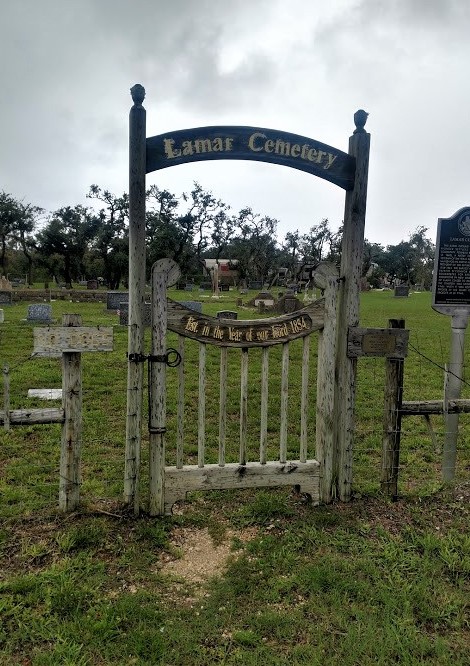 Crossing the bay down into Fulton, Texas, I found my next geocache in the Fulton Cemetery (GC188TK). Land for this community graveyard was set aside when the town of Fulton was platted by George Ware Fulton in 1868. The earliest documented burial is that of a child, Louis L. I. Greenough (1868-1869). The large number of children's graves attests to the often harsh conditions of pioneer life. Also interred here are European immigrant settlers, prominent local citizens, and veterans of the Civil War, World War I, World War II, Korea, and Vietnam. A brush fire in 1947 destroyed many of the early wooden markers, leaving some unmarked graves. 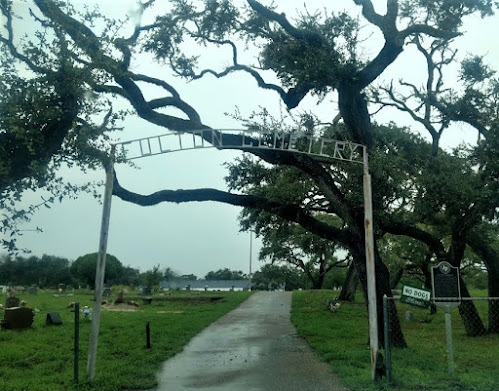 Just before crossing the bridge into Corpus Christi, in the town of Portland, was another geocache (GC58B90) call "Home Sweet Gnome" that had a lot of favorite points given to it. So I just had to go and check it out. It was a very creative cache someone constructed out of a tree stump. 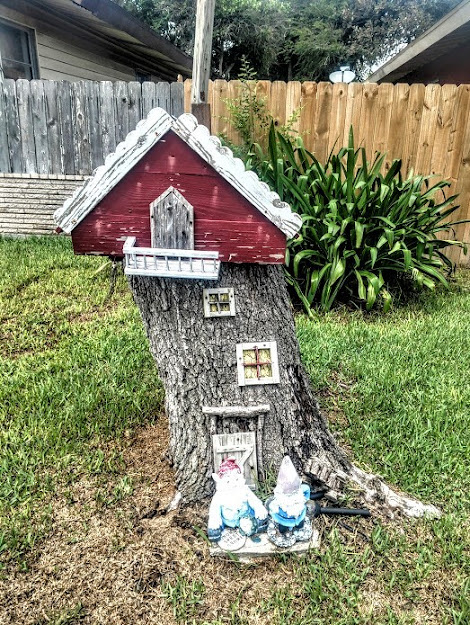 Heading west now making my way back to Falcon Lake, I make a stop in the town of Alice to grab a geocache at the Collins Cemetery (GC119Y1). Alice, Texas is the town originated in the defunct community of Collins, three miles to the east. About 1880 the San Antonio and Aransas Pass Railway attempted to build a line through Collins, which then had 2,000 inhabitants. The townspeople were not amenable to selling their land to the railroad company; consequently, the railroad site was moved three miles west, and in 1883 a depot called Bandana was established at its junction with the Corpus Christi, San Diego and Rio Grande Railway. Bandana soon became a thriving cattle-shipping point, and application for a post office was made under the name Kleberg in honor of Robert Justus Kleberg. The petition was denied because a town named Kleberg already appeared on the post office list, so residents then chose the name Alice, in honor of Alice Gertrudis King Kleberg, Kleberg's wife and the daughter of Richard King. The Alice post office opened for business in 1888. Within a few years the remaining residents of Collins moved to Alice, which was by then a thriving community.
My last geocache was in a town called San Diego, Texas (GC78TC9). Early travelers between Goliad and Mier stopped to use the springs that fed San Diego Creek in what was to become San Diego. Around 1800 Julián and Ventura Flores (father and son) received two land grants known as San Diego de Arriba and San Diego de Abajo. The grants were surveyed in 1806 and they received their deed in 1812. In 1828 the first birth was recorded and the population was estimated at 25 families by 1844.
In 1846 Gen. Zachary Taylor and his troops briefly occupied the town during the Mexican War. In 1848 Ventura Flores sold land to Pablo Pérez, who built houses and named the town Perezville. The town's first post office was opened in 1852 in a small white building known as the Casa Blanca. It is said that Perezville was renamed San Diego at this time. This building was occupied by Confederate forces during the Civil War and it later served as a store, a speakeasy, a residence and a bar. It remains standing today.
Grabbing a bite to eat as well, it was still nearly two hours of driving back to the house at Falcon, Texas. After 600 miles today, I have completed the last of the southern Texas counties! Only a few more to go up north to complete the state. Thank you for riding along with me. I welcome you back again soon for another days adventure.
Posted by Mark at 6:49 PM