Welcome back to Day 3 of my geocaching roadtrip back to Texas. Today I hope to finish up Alabama and complete my way across Mississippi, perhaps even into Louisiana. But we'll just have to see. I'm still pretty tired after yesterdays long geocaching adventure. The sun is just coming up, we gotta get started. Grab your gear and a cup of coffee, the GeoJeep is waiting! 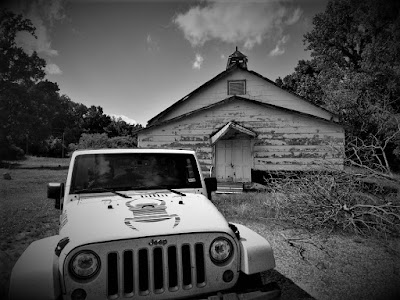 Checking out of the hotel in Scottsboro, I quickly make my way up to Huntsville and jump on I-565. Breezing through Madison County, since I already had it, I stop for a quick guardrail park and grab geocache for Limestone County (GC1TFEH). Crossing the Tennessee River into Decatur, I quickly exit the highway into a Jack-in-the-Box for breakfast and a parking lot cache to pickup Morgan County (GC81F3J). In Lawrence County I stopped for two more quick finds, one in a parking lot (GC5QYQ5) and the other a puzzle in a cemetery (GC32AXA). I'm in such a hurry mode trying to put miles behind me I forgot to take pictures! Entering Franklyn County I stop at the first roadside geocache along Hwy 24 near this historical marker for the town of Newburg (GC5T9K7).
Crossing the state line into Mississippi, my first county find was in Tishomingo County at the Locust Tree Cemetery (GC8028T). Once again I forgot a photo! Next door in Prentiss County, I stopped at the Marietta Volunteer Fire Department for another quick geocache (GC290WG).
Driving down the Natchez Trace Parkway into Lee County, I stop at the Twentymile Bottom scenic pull-off for a virtual geocache (GC8F1D). The historical marker there reads: "Twentymile Bottom, now cultivated, was typical of the many low areas along streams through which the Natchez Trace passed. In 1812 Rev?? stopped at Old Factors Stand, near this bottom, and wrote this account of bottomland travel:"
"I have this day swam my horse 5 times, bridged one creek, forded several others, besides the swamp we had to wade through. At night we had a shower of rain - took up my usual lodging on the ground in company with several ??."
I replaced the answers to the questions of the virtual cache so as not to give them away. I do leave you with this scenic view photo from atop the bottom! 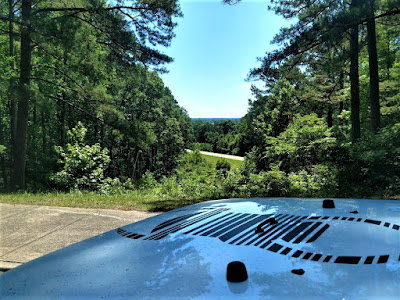 In the center of Lee County you'll find Tupelo, MS. Whenever I hear of Tupelo I think of two things: 1) the home of wino philosopher Mudbone, a created character and alter-ego of Richard Pryor and 2) the birthplace of Elvis Presley. While you can't pay a visit to Mudbone's home, you can visit Elvis's birthplace. Plus there's also a geocache there (GC2YJEY).
At the Elvis Birthplace, Chapel, Museum and Park, you'll find the small 2-room house built by his father, grandfather, and uncle. The Presley family didn't have much and they had to move out of this house when Elvis was just a few years old for lack of payment. They left Tupelo when Elvis was 13 years old. There's even a replica of a typical outhouse found in a poor southern town. Usually shared by multiple houses along the street and more of a public bathroom. 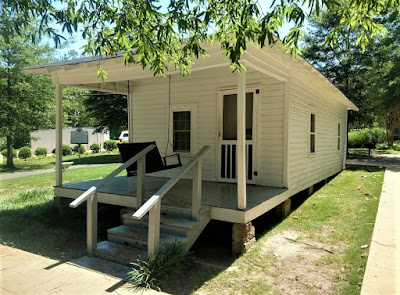 One of many statues and displays, this one depicts the young Elvis with his guitar along with the older entertainer and showman wearing his famous cape. 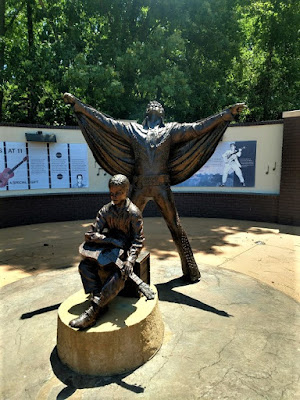 The original Assembly of God Church building, moved to this museum site, is where the Presley family attended church. It was here where Elvis learned to play the guitar and cultivate his Southern Gospel heritage. 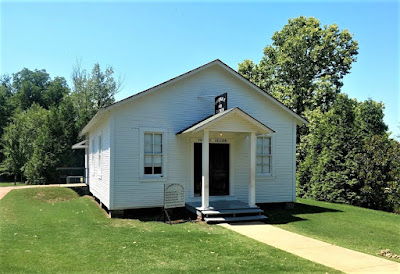 Continuing westbound along US-278 into Pontotoc County, I made another quick parking lot cache find (GC2Z18N). Then for Lafayette County, I stopped for the Midway Cemetery cache (GCHV91) east of Oxford. A quick look around at the headstones and there was one grave that stood out for a fallen soldier. 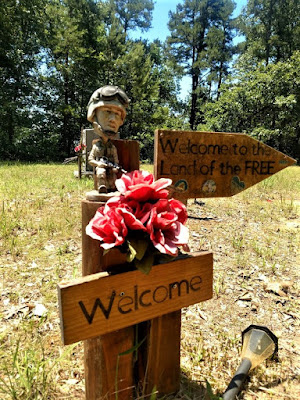 Making my way across the state, Panola County was next up. And for a few minutes I became a Panolian as I looked for the geocache hidden at the local newspaper (GC13T4F).
Arriving in Quitman County I stopped for a couple of geocaches that were placed on private property. These homeowners were all too happy to open up their front yard to geocachers (GC478T5) and share their little village they created. There's a couple of cabins that are full size and some not quite sized. Just a whole bunch of fun creative stuff. 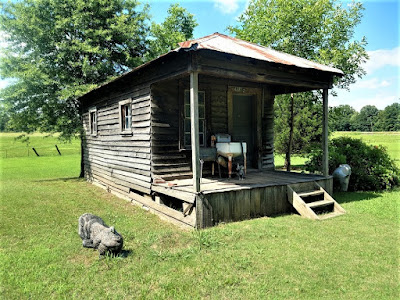 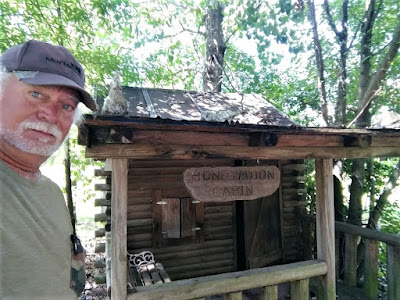 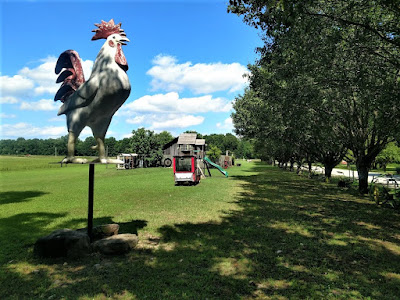 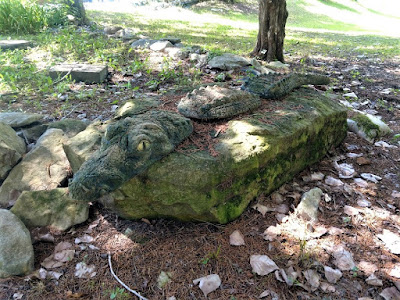 Continuing westbound on US-278 and still in Quitman County but on the way to the next, I caught a glimpse of an old abandoned church with a graveyard out the corner of my eye just calling out to me causing me to make a u-turn and explore further. After I parked I checked my phone and there just happened to be a geocache hidden there also! (GC3NGGM) But as luck would have it, there were some DNF's and I didn't have any success in finding it either. But I did walk away happy still because I love finding these old abandoned places. 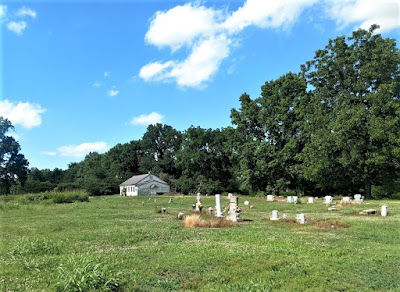 After spending a couple of hours researching for this blog post, all I was able to come up with is that it was called the Pawpaw Church and Cemetery. There is also a Pawpaw Cemetery to the west in Clarksdale. These were predominately black cemeteries and reading many old newspaper articles, they had fallen into neglect. While the church itself has long been abandoned, it appears as though the graveyard has been taken care of recently.
Sadly I regret now only taking a photo of one headstone. The findagrave website only shows a few listings for this cemetery and no photos at all. The one headstone I did photograph wasn't even listed. So I added the name, dates, and the pic. I think I'm gonna want to go back and take more pictures. 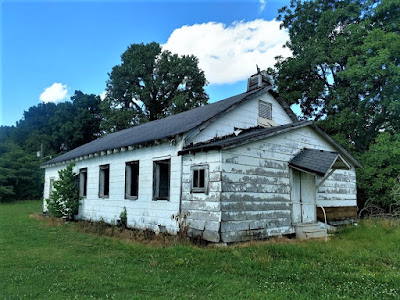 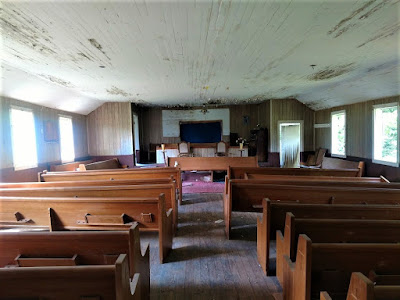 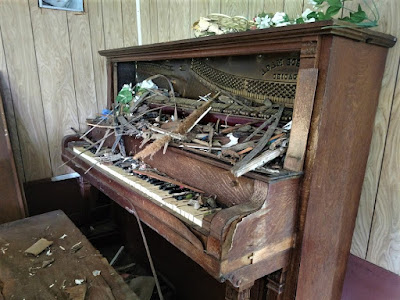 I also found out that the "pawpaw" refers to the pawpaw fruit tree in the area. Similar to an apple or pear, but it has a vanilla taste to it. Supposed to be delicious. You won't find it at your local produce stand because it doesn't stay ripe very long. Therefore it usually just grows in the wild and has to be eaten right off the tree in the fall.
Next up in Coahoma County was another of the Mississippi Blues Trail historical markers and a cache (GC2KDJ6). Rock ‘n’ roll and rhythm & blues pioneer Ike Turner began his career playing blues and boogie-woogie piano in Clarksdale. Turner was born less than a mile southwest of this site, at 304 Washington Avenue in the Riverton neighborhood, on November 5, 1931. In his pre-teen years he got a job here at the Hotel Alcazar, where he operated the elevator and did janitorial work. Turner later rose to fame as a deejay, producer, and leader of the Kings of Rhythm band and the Ike & Tina Turner Revue.
What caught my eye was the old building and the Paramount Theater sign across the street. The original sign above it carved in stone says Theatre Marion. A December 1918 newspaper stated that the "Marion Theatre is one of the largest and most handsome in the state, having only recently been completed." The theater featured vaudeville shows and traveling productions. "Glorious Betsy" was the first talking picture shown there in November 22, 1928. The Paramount Theater, as it became known by then, had closed in the mid-70's. The facade with the sign actually leads to the theater entrance in the alley to either the building on the left or out of frame to the right, which is the actual theater / auditorium and dressing rooms. 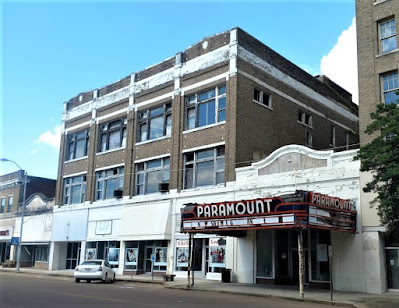 Now somebody done left the water running and there's this big river flowing by in my way going westbound. Looks like I'm gonna have to drive south to find a bridge to cross this Mighty Mississippi!
Still following US-278, I enter into Bolivar County and a tiny town called Alligator, MS. A quick roadside guardrail cache (GC4FAC3) for the county and I keep moving. Then I jump over to the backroad of MS Hwy-1 which runs parallel and closer to the river. I spot another old church north of Rosedale and it also has a geocache hidden nearby. The old country church (GC32W1N) is called Saint Paul's Church Complete. And that is about all the information I can find on it! 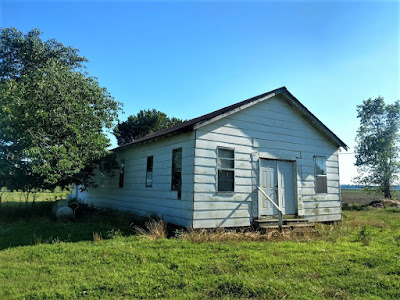 Down and to the east of Rosedale I go to check out this old cemetery and find another cache (GC34HYD). At New Hope Cemetery there are just over 100 interments dating as far back as 4-year old Willie Johnson in 1903.
From there I continued south on MS-1 for quick roadside park and grab caches in Washington County (GC2VYC1), Issaquena County (GC2TT6V), and Sharkey County (GC3936F) for the last in Mississippi. By now the sun has set but I continue on down to a hotel in Vicksburg for the night. That was it for this Day 3 Thursday.
I'm gonna go ahead and include Day 4 Friday here as the last paragraph. I drove nearly 500 miles in 9 hours through Louisiana all the way to Killeen, Texas. Aside for gas and food, I only made 2 geocaching stops. The first was at the Clear Creek Chapel and Cemetery for Red River Parrish (GC1Z8N1). The other was at the Prude Cemetery for De Soto County (GC2JFKA).
Thank you for joining me. I really do appreciate the company on these long roadtrips. Please feel free to share these stories with your family and friends. You can follow and share me through these links to the various social media platforms:  Facebook,  MeWe,  Parler,  Gab,  Twitter,  Instagram,  MAGAbook,  and  Reddit. Follow us through any or all of these platforms and whichever you choose, please leave your comments. We'd love to hear from you and it encourages us to continue sharing our adventures.
Posted by Mark at 8:32 AM