WOW, Busy day today! I woke up bright and early this morning ready to go on Day 2 of this Geocaching roadtrip from North Carolina back to Texas. I didn't get off work yesterday until just after noon, so it was a late start getting going. I only made it down into South Carolina. It's Wednesday morning and there are lots of counties and caches on the agenda. I gotta start the new project in Texas on Monday morning. So hop on in the passenger seat and let's hit the road! 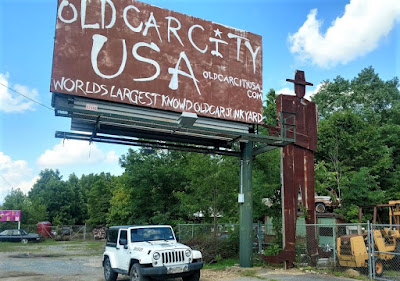 After checking out of the hotel in Spartanburg, I drove down I-85 to Greer and my first geocache for Spartanburg County. "Easy Wood's"  is a virtual geocache (GCG9YP) for Woods Chapel Methodist Church and Graveyard across the highway from the BMW plant. Fun fact for the next time you're on Jeopardy or something... what's the difference between a graveyard and a cemetery? A graveyard is next to a church whereas a cemetery is by itself. The Rev. Henry Wood, for whom the church is named, was a Revolutionary War soldier who lived from 1756 to 1843.
Over in Greenville County was a quick and easy little multi-cache (GC2370V) that I had not seen before. A multi-cache consists of at least a stage one or multiple stages to get clues for the final location. This stage one was a travel bug dog tag attached to a tree behind a shopping center. The travel bug code had two numerical digits which you use to substitute into a new set of coordinates which take you to the final location for the real cache. The bonus for this one was that not only do you get a cache find but also get to log a travel bug discovery.
Then a quick park and grab cache for Pickens County (GC4W54R). Also located in Pickens County is Clemson University. There I made a stop for a virtual cache called "Death Valley" (GC1989). There were several different geocaches on campus. However I only made time for just this one. Clemson's Memorial Stadium has the nickname Death Valley because it's view of the cemetery on the hill before the upper decks were constructed. 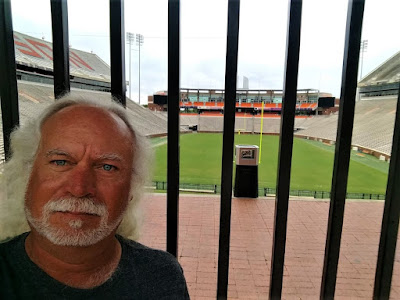 Driving on down US-123 into Oconee County, there was another quick parking lot cache find to claim that county (GC3C0ZD) and my last for South Carolina.
Crossing the Tugaloo River into Stephens County, Georgia, I stopped soon thereafter for my next geocache at a historical marker. The "Old Tugaloo Town" (GC7TCX9) historical marker reads: "North of this marker, in the center of the lake, once stood and important Indian town. The area now marked by a small island was settled around 500 A.D. and occupied by Cherokee Indians around 1450. Traders were coming to the town by 1690.

"In 1716, while Col. Maurice Moore treated with Charity Hague, Cherokee Conjuror, a group of Creek ambassadors arrived. The Creek Indians, supported by Spain and France, wished to drive the British from the Carolinas, in the Yamassee War. The Cherokees killed the Creek ambassadors and joined the British. By 1717, Col. Tehophilus Hastings operated a trading center at Tugaloo where gunsmith, John Milbourne cared for Cherokee firearms. Indian agent, Col George Chicken visited Tugaloo in 1725 and described it as "...the most ancient town in these parts.

"Tugaloo remained a principal Cherokee town until destroyed by American patriots fighting these allies of the British in 1776."
Slowly making my way westbound, the next county was Habersham County. I stopped in the town of Cornelia for my next geocache at the historic train museum (GC3QGWC). The historic Cornelia Train Depot was first built by the Southern Railway Company in the late 1880's, soon after the town was founded. The railroad depot was originally called Blaine Station for the Republican presidential candidate James Gillespie Blaine. When the first charter of the town was secured by the attorney representing the railroad, Pope Barrow, the name was changed to Cornelia in honor of his wife. The official date of incorporation was October 22, 1887.
The original terminal was damaged in 1910 in a fire, and rebuilt in 1914 to its current appearance. This large passenger and freight station was once the home to two rail lines The Blue Ridge & Atlantic Railroad (also known as the Tallulah Falls Railway) and The Georgia Air Line Railroad, now known as Norfolk Southern. This depot is the symbolic and historic heart of Cornelia and in fact the town's first boundaries were set at one half mile increments in all directions from the depot. Today this depot serves as a railroad museum filled with relics from the days when the railroad ruled, it is also a great place to sit and enjoy the passing trains roll by. 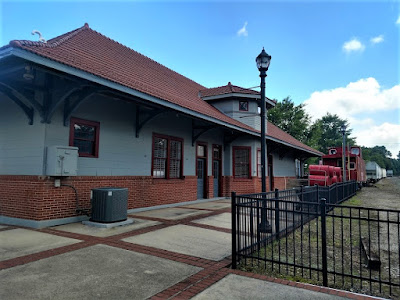 Standing outside the train depot is the 7ft tall Big Red Apple monument. The pedestal it rests on is 8ft tall. The monument was constructed in 1925 and donated by Southern Railway to celebrate the annual festival of the many apples grown in the region. 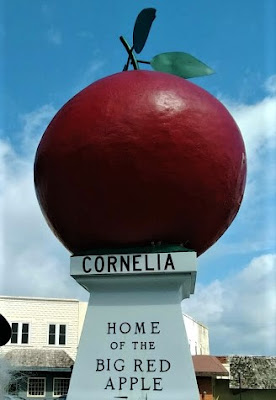 Driving south on US-441, I crossed over into Banks County and a geocache right at the historical marker at the county line (GC7ED1F). The marker reads: "This line, sometimes called “The Four Mile Purchase Line,” was the boundary between Georgia and the Cherokee Nation from 1804 to 1818. It was established when Georgia bought a four mile strip from the Indians so as to take in Wofford’s Settlement on Nancytown Creek. James Blair was agent for the government, James Vann and Katahahee for the Cherokees. It formed the boundary between Jackson Co. and the Cherokees; later Franklin Co. and the Cherokees, and is now the line between Habersham and Banks Counties."
Back up into White County, I get the "Train of Thought" geocache (GC5PBVQ) for another county at the Mt Yonah Book Exchange. There you'll also find this old railroad train narrow gauge engine. 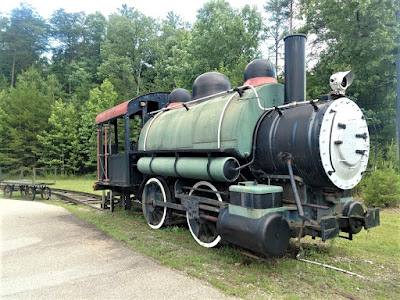 And then a quick stop for the cache and scenic views at the Popcorn Overlook (GC1F76H) in Rabun County in the Blue Ridge Mountains. 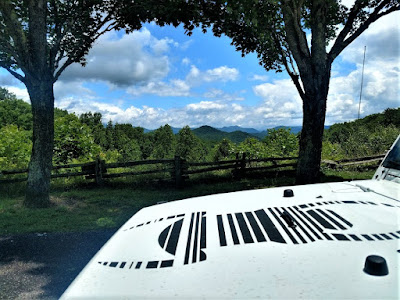 Driving westbound on US-76, I make a quick park and grab stop for Kelly's Bridge (GC34MR8) to pick up Towns County. Followed by two more quick roadside park and grabs in Union County (GC6E5W2, GC72R98), another in Fanin County (GC7YT9F) and one more in Gilmer County (GC3R4BH).
Down in Pickens County, I stop for a virtual geocache (GC7442) at the Zell Miller Mountain Parkway monument. Dedicated in 1986 to the "strong character, integrity, and moral fiber of the people of Appalachia are exemplified in this native son of Georgia's mountains, Zell Miller has dedicated his life to aiding his fellow man. Scholar, author, businessman, teacher, champion of developmental highways, legislator, serving as Lieutenant Governor longer than anyone in Georgia history." 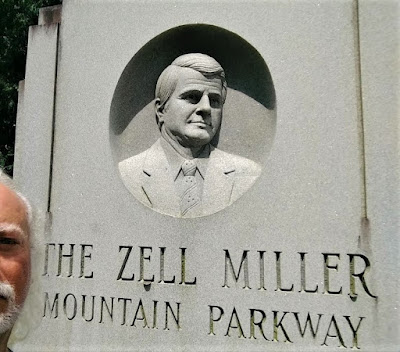 And then there was the "Bomb's Away" geocache in Bartow County (GC50RGA). Not sure why someone would have this setup in their front yard, but when you think you've seen it all... expect the unexpected! 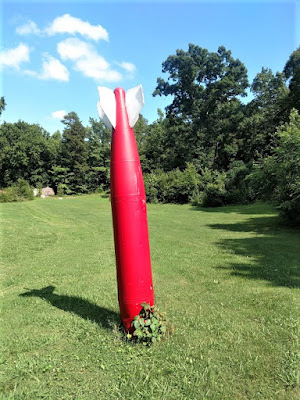 Just down the road from the bomb, is "Old Car City USA, the World's Largest Old Car Junkyard" that has been here since 1931. (GC46W33) I couldn't find the cache that was hidden. And since it was closed, I couldn't go exploring the 6 miles of trails through the woods full of old cars. Not that I had time to do so anyway! But it would be fun to get back here one day to do so. But just what they had out front and peaking through the fence and windows inside was worth the stop. 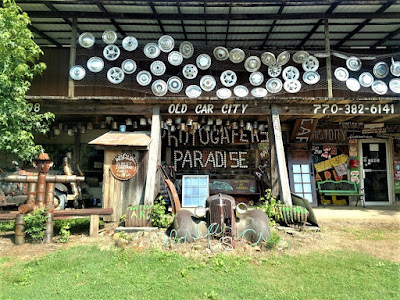 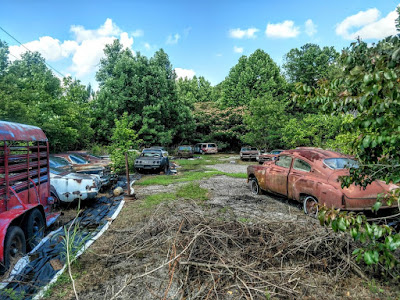 Quick park and grab caches in Floyd (GC65626) and Polk Counties (GC27Z53) and I was heading for the state line and into Alabama.
My first stops in Alabama were for Cherokee County where I found two geocaches. Driving west on US-278, I took a side road and arrived in the town of Spring Garden for my first cache (GC2583K). Spring Garden was originally named Ambersonville after one of the early families that settled the community. A post office was established in 1842 as Liberty and changed to Spring Garden in 1844. The Selma, Rome, and Dalton Railroad began rail service through the town in 1870. The line later became part of the Southern Railway and was abandoned in the 1970's.
This building here was last known as the W.L. Westbrook General Merchandise Store. Constructed in 1878, it was first known as the P.H. Savage General Merchandise Store, then T.F. Stewart General Merchandise Store. William Lester Westbrook died in October of 1981 and can assume that the store closed around that time period. The second photo I found in the Library of Congress database looks to be from the late 1980's or early 1990's and the store is already abandoned. (The photo I took is from the post office side. The street view is completely covered in vines!) 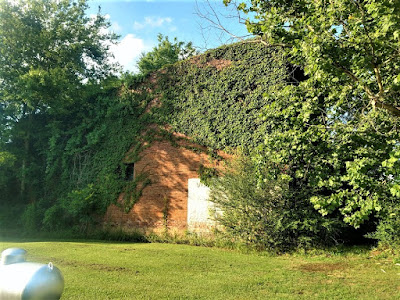 The other geocache in this county was a few miles away. The Goshen United Methodist Memorial Park (GC49R24) was established by members, relatives, and friends after a tornado destroyed the church on Palm Sunday, March 27, 1994.
On this Sunday morning, 20 children had begun the service by marching around the sanctuary waving palm branches while the congregation sang the hymn: "Tell me the stories of Jesus." The worship service began with Jesus' triumphal entry into Jerusalem, and was to end with remembering His tragic death on the cross. At approximately 11:30, a tornado with winds up to 250 mph, and moving at a speed of 55 mph descended upon the church. The edge of the half mile wide storm caused a window to break, and within four seconds the building exploded propelling the congregation into literally living the Holy Week story of joy, suffering, death, and resurrection.
Jehovah Jireh, the Lord will provide, had just been sung when the winds blew the roof and the south wall to the north, trapping, injuring, and killing many worshippers. For two hours, persons assisted in the rescue efforts freeing those trapped underneath the debris and treating the injured. By 1:00, four hundred volunteers had arrived to help. Due to the heroic work of many rescue and medical workers, as well as unexpected helpers, 126 people survived. Of the twenty killed, six were children. Those surviving gave remarkable stories of experiencing God's presence and sustaining power in the rescue efforts and through the hard days that followed. 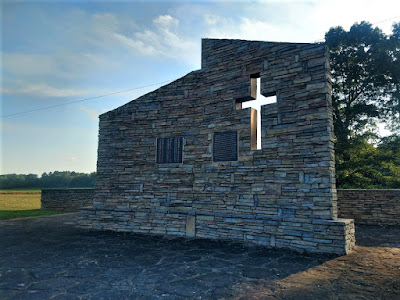 Driving up into Dekalb County, I stopped at the Lebanon Courthouse for a virtual geocache (GCB0CE). The historic courthouse was constructed during the 1840's when Lebanon, the county seat of Dekalb County, was a thriving community with inns, taverns, and government offices. This building remained in use as a courthouse until 1876, when the stagecoaches serving Lebanon gave way to progress. The county seat was then moved to Fort Payne, where railway service was available.
By the time I got here the sun was already setting behind the building making it hard to get a decent photo. 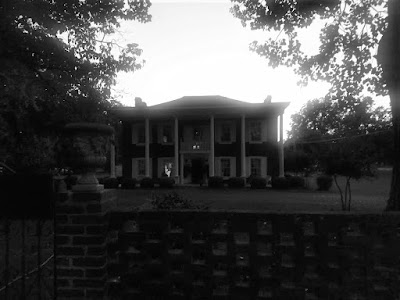 Finally it's getting to be 9:00 pm by the time I get to Scottsboro, Alabama in Jackson County. I grab one last geocache (GC6F458) in a Walmart parking lot to claim the county. Those are about the only caches I want to find in the dark, under a street light!
Well after 15 hours of driving and caching, I'm ready for the hotel! That's it for today. Let's get some sleep and start again early tomorrow morning. I hope you come back again and ride along with me. I'm out... ZZzzzz....
Posted by Mark at 4:27 AM