2020-04-05: Geocaching Counties Around Georgia and Finding a Covered Bridge, an Old Jeep, Cemeteries and More

Welcome back to the AwayWeGo Geocaching Adventures blog. Our job has us traveling all across the country. We prefer the rural backroad and byways when driving from jobsite to jobsite because they have the most interesting places. We find most of these historic and roadside attractions because of geocaching, but then there are often a lot of unexpected surprises too.
In today's edition, we've been in Georgia working for a week now and it's our first day off. So of course it's time for a mini-roadtrip around the backroads of Georgia to add some new counties to the geocaching map. So hop on in the GeoJeep and let's go see what we can find! 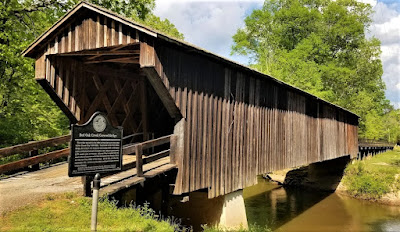 A short drive down the road on the way to our first geocache, I pass by this house with some old rusty farm equipment off to the side. But what caught my eye the most was the old rusty Jeep. Along with the trucks back within the trees, it's kinda sad that they're just abandoned and left to rust and rot away. 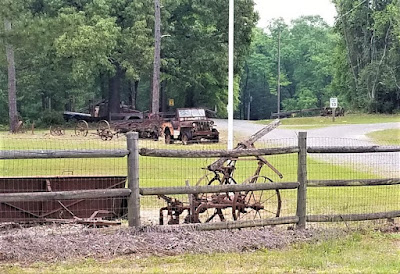 Now in Webster County, it was a quick roadside geocache stop for the county (GC1W1MN).
Driving north on Georgia Hwy 41, we arrived in Marion County. Right at the county line is what remains of the ghost town community of Church Hill (GC71HPY). As early as 1812, Methodist missionaries came into this area and found the Indians to be receptive to the Gospel, so missions were established to teach and minister to the Indians. Following these missionaries came large numbers of immigrants from the eastern United States and from North and South Carolina. The mission points were established along trading paths which developed into the "Old Salt Trail" and later St Mary's Road from Columbus to the coast. 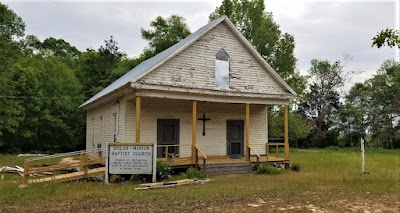 Here near three crossroads, a large church community developed. Five churches soon sprung up in this community originally known as Searsville. After the Baptist, Methodist, Presbyterian, Bible Baptist, and Christian Church's were established the area was more commonly known as Church Hill. The Shiloh-Marion Missionary Baptist Church is the only remaining church of the five. What began as a Baptist Missions Point in 1812, became Shiloh Baptist Church in 1835 with 8 members. At its peak it grew to 150 members. Presently there are about 12. A time capsule was placed back in 1995 to be opened in 2045. (For a full recount of the history of Church Hill with photos and more, visit https://ursa.mercer.edu/handle/10898/12398) 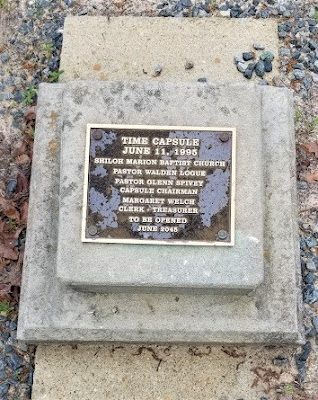 Across the street is the Shiloh Baptist Church Cemetery. Many of the communities early pioneers and Civil War veterans are buried here. There are also some smaller cemeteries nearby and all that remain of the other churches. Among the cemeteries are segregated sections, one for slaves and another for Native Americans. 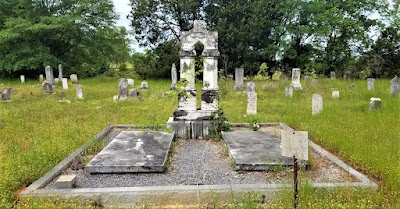 Also in Marion County and further north in the town of Buena Vista, we stopped for another geocache behind the historic old Gypsy Camp Grist Mill (GC71K1Q). There were a LOT of logs out behind the building and I spent a LOT of time looking at all the possible hiding places. But I wasn't able to find the cache and had to DNF it. But I did learn some history.
The Gypsy Camp Grist Mill was moved from its original location to its current site on the Murray Estate in 1930. At the time, the mill was a key agricultural asset to the community. It used electricity to power a network of chutes and belts woven through the three-story building to grind corn into meal. It operated for thirty years, closing in the early 1960's. Gypsy Camp Grist Mill got its name from a nearby campground and store where for a few weeks every winter ‘gypsies’ made their home, purchased supplies, and traded. The gypsies were believed to be of Serbian and Russian decent and migrated to the United States during the 1850's. 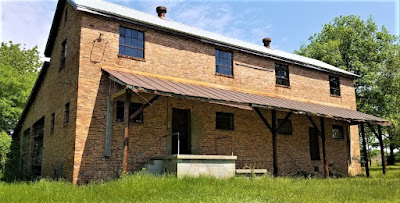 Crossing the line into Talbot County, I make a quick stop to find a geocache in an old pay phone (GC51AA7). Then at the top of the county there was another geocache at this historical marker (GC3XR5X). A large memorial which reads: "In Honor of Our Confederate Heroes, Sons of Confederate Veterans 1896, Echols Guards Camp #1711 S.C.V., 2005" 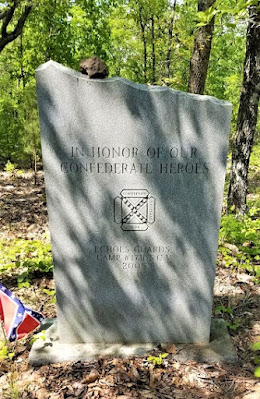 Next up in Meriwether County, in the town of Manchester, is this train car and my next geocache (GC70TEH). It's called Elliott Station as a memorial for Tyron Elliott, a prominent member of the community. 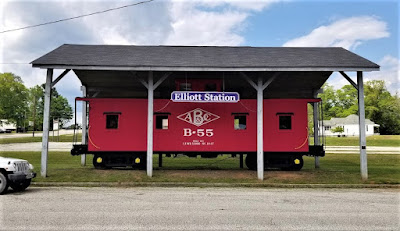 The next two geocaches were at the Red Oak Creek Covered Bridge (GC2885, GC6QDNP). Also located in Meriwether County, this bridge was built in the 1840's by freed slave and noted bridge builder Horace King (1807 - 1885). Constructed on the town lattice design, the bridge's web of planks crisscrossing at 45- to 60-degree angles are fastened at each intersection with a total of approximately 2,500 wooden pegs, or trunnels. Although King is credited with the construction of many covered bridges throughout West Georgia, this is his only surviving bridge of this design. At 391 feet, including the approaches, this structure is the oldest and longest wooden covered bridge in Georgia. And you can still drive across it! 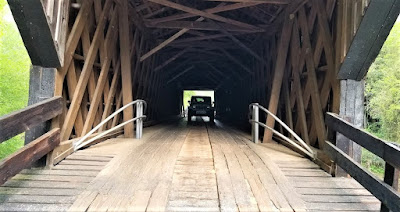 If you look carefully down the side of the covered bridge you will notice a change in the wood forming a line about 2/3 of the way up the side. On July 7, 1994, the river flooded over and rose up to that height.

Now in Coweta County in the town of Senoia, there's another bridge. This town in Georgia is often used in filming the TV show "The Walking Dead." In The Walking Dead, this old bridge, which crosses over railroad tracks, is in the fictional town of "Woodbury" in the TV show. While I didn't find the geocache (GC86RNR) on the bridge, I still like finding old bridges.

Here's the GeoJeep in downtown Senoia. You might recognize this street scene and a gazebo where a virtual geocache (GC89183) is located in other films such as "Driving Miss Daisy" and "Fried Green Tomatoes."

Crossing Line Creek into Fayette County, I stopped for a quick park & grab Challenge Cache (GC6JM2D). A Challenge Cache is usually a simple cache to find. However you have to meet certain achievements in order to log a find on it. This one requires you to have found 1000 geocaches before logging a "Found It." I passed that accomplishment a long time ago! And then there was the State Souvenir Challenge cache (GC7QN34) up the road. That one required you to find a least one cache in 10 different states. Yep, passed that one a long time ago too!
From there taking GA-34 over into Heard County and the town of Franklin, I make a quick find at the Veterans Memorial Park (GC69X5M). 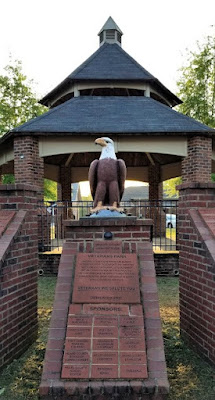 Nearly 8 PM and heading south, I make one more stop as it's getting dark for a quick cache in Troup County (GC2D30C). We picked up nine new caching counties on this run today. Still a little more than 100 miles of driving to get back and I gotta work tomorrow, we drive straight there. Found a lot of history on our adventure today. I hope you have enjoyed the ride and come back soon. See you next time...
To follow along on our travels and keep up with my latest blogs, you may do so here of course. But also by using you favorite of these social media platforms: Facebook, MeWe, Gab, Reddit, Parlor, Twitter, and Instagram. These all link directly to my profile. Again, please feel free to comment and / or share.
Posted by Mark at 7:41 AM