Today was the fourth and final day of our Texas to Georgia roadtrip. This has been a great drive so far on the backroads and byways, seeing the sites, geocaching and picking up new counties along the way. For today we found some Civil War history, old cemeteries, a bird-dog champion and more. But I'm getting ahead of myself. Hop on in the GeoJeep and let's get rolling...

Leaving out of Montgomery, Alabama, our first stop was southeast of town for a geocache at the Carter Hill Cemetery (GC2VFET). With just over 300 interments, the Carter Hill Cemetery dates back to 1844 with the burial of Andrew Allen. Along with his wife and two sons, they are the first four burials in this cemetery.
And then one more quick roadside geocache (GC2R7Y8) before leaving the county.
Continuing eastbound into Bullock County, we arrive in Union Springs and the Bird Dog Field Trial Capital of the World (GC56NF0). On February 21, 1996, the City of Union Springs and the Tourism Council of Bullock county dedicated this life-size bronze statue of an English Pointer. Sculpted by Bob Wehle, the monument pays tribute to the 11 men honored by the Bird Dog Field Trial Hall of Fame, to Bullock County’s unexcelled upland game country and bird dogs, and to the men and women who participate in the sport of field trialing. 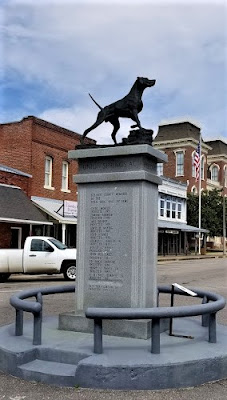 Also located in Union Springs was this Log Cabin Museum. From the historical marker: "Early settlers of this area cleared land and built their first homes of logs in the 1830's. This cabin was built by Rueben Rice Kirkland (1829 - 1915) about 1850. He and his first wife had ten children while living in the log home.
"At one time an additional bedroom and chimney were on the right side, and the back porch was closed in for cooking and eating. A small log kitchen stood a few feet from the back and was later converted to a smoke house. The milk house beside the well was on stilts to protect butter and milk from animals.
"In 1981 the Bullock County Historical Society moved the cabin into Union Springs from its original site at Stills Cross Roads in Southern Bullock County and restored it as a museum." 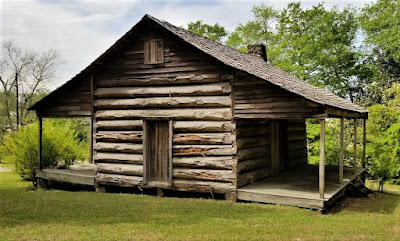 If you look at the very first photo at the top of the blog, you can see that this new location of the cabin is off to the side of the Old City Cemetery, also known as The Confederate Cemetery. The historical marker reads: "Micajah Norfleet Eley donated land in 1849 for the Baptist Church and an adjoining public cemetery. The oldest cemetery in Union Springs, it served the city for 36 years. The Confederate Monument at the center (seen in the top photo) was unveiled at the intersection of Prairie and Hardaway Streets on March 29, 1895 by the Ladies Memorial Association. In 1973 it was moved to its present location. 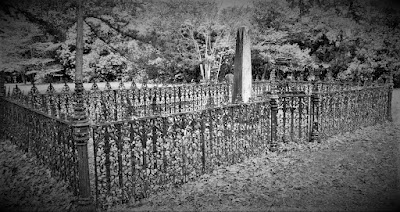 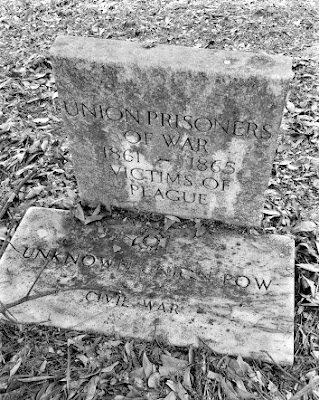 US-82 eastbound over into Barbour County, the next geocache (GC2MY21) was a quick roadside stop at another historical marker. There wasn't anything to see there. Just the historical marker for the Election Riot of 1874 which read: "Near here is Old Spring Hill, the site of one of the polling places for the November 3, 1874 local, state, and national elections. Elias M. Keils, scalawag and judge of the city court of Eufaula, was United States supervisor at the Spring Hill ballot box. William, his 16-year-old son, was with him. After the polls closed, a mob broke into the building, extinguished the lights, destroyed the poll box and began shooting. During the riot, Willie Keils was mortally wounded. The resulting congressional investigation received national attention. This bloody episode marked the end of Republican domination in Barbour County."
Crossing the state line into Quitman County, Georgia, I quickly exit the bridge and turn back towards the reservoir for my next geocache (GC8M6AW). To the right just outside the photo below is the US-82 bridge which crosses over the lake. This little path heading down to the water is what remains of the old road that you used to drive between Alabama and Georgia before the Walter F. George Lock and Dam was built in 1962. Now it sits underwater. 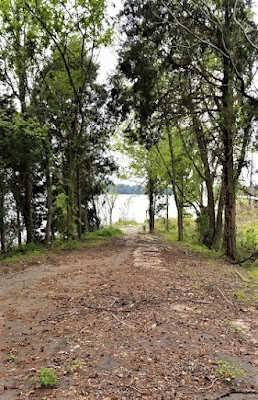 Our last two geocaches were in Randolph County. The first was a quick roadside park and grab just east of the town of Cuthbert (GC7EV1G). The second was in the town of Shellman, Georgia (GC887JW). Originally called Ward Station, Shellman was established in 1883 and named after Major W. F. Shellman, who was the traffic manager for the Central Georgia Railroad. This was the Shellman Railroad Depot. 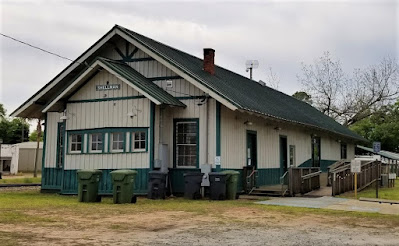 There's also these muraled silos in Shellman that portray the history and scenes of Shellman's past.

The next county over is Terrell and that's where we'll be staying and working. Time to settle in and relax after a long road trip. I hope you have enjoyed these last four days traveling along the rural backroads and byways of this great country of ours. And if I have inspired you to get off the Interstates and onto the scenic roadways, leave me a comment and let me know.
To follow along on our travels and keep up with my latest blogs, you may do so here of course. But also by using you favorite of these social media platforms: Facebook, MeWe, Gab, Reddit, Parlor, Twitter, and Instagram. These all link directly to my profile. Again, please feel free to comment and / or share.
Posted by Mark at 6:05 AM