2020-06-03: Another Geocaching Roadtrip Through the Backroads of Georgia

Well our time in Florida is done and it's off to a new project in North Carolina. According to Google it's just a simple 8 hour day trip drive to get there. But where's the fun in that! In reality, it actually took us 2 1/2 days to get there! We try to avoid the Interstate Highways and take the backroads, sightseeing and geocaching along the way.
On this first day of our roadtrip through Georgia, we visited several old cemeteries, old churches, and some other historical places. Finding 14 geocaches, we picked up 11 new caching counties in the process! So come onboard, ride along and see what and who we've found today... 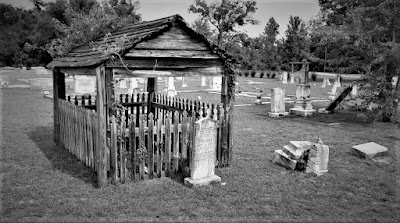 Our first stop after leaving Florida was a geocache in the Howell Cemetery (GC2FPY3) for Echols County, Georgia. The cemetery has about 130 interments, most dating from 1916 through the present. But there is one burial listed on the Find-A-Grave website dated 1839. The small community of Howell once had a post office established in 1899 which remained until 1957. A township was incorporated in 1905, but it was eventually dissolved in 1995. 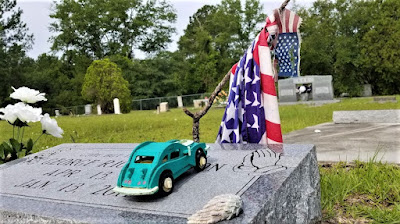 At the end of the entry road, there is another historical marker describing an Indian skirmish at Cow Creek. "New here, on August 27, 1836, Georgia Militia companies commanded by Col. Henry Blair, Captain Lindsay, and Capt. Levi J. Knight, fought a skirmish with Creek Indians and routed them, killing two and taking several prisoners. During this summer the Indians had committed many raids and massacres as they traversed the border counties on their way to Florida to join the Seminoles. Georgia troops had been following them for weeks, and overtook this band in the cypress swamp, on the edge of Cow Creek."
Driving over to Lakeland, GA in Lanier County, I stopped by Camp Patten for my next geocache (GCT6ZP). Camp Patten was donated by Mr. Lawson Leo Patten (1896-1983) to the South Georgia Council of the Boy Scouts of America in 1965 to further promote the ideals and methods of the Scouting movement. 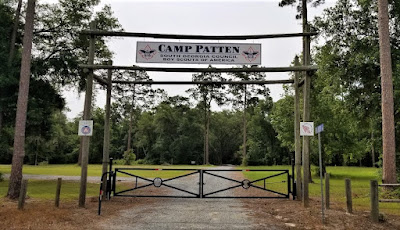 A half-mile up the road was the Burnt Church and Haunted Cemetery (GC121CF). One of the first churches constituted in the area was Union Baptist Church. It was organized on October 21, 1825 on the banks of the Alapaha River at Carter's Meeting House. Captain Jesse Carter settled the land earlier in 1925 to provide more room for his family, slaves, and hundreds of cattle. In 1836 as a band of Creek Indians passed on their way to join the Seminoles at Noochee, near present day Fargo, they set fire to the Union Church. It was later called the Burnt Church. (Note: I've found conflicting dates for the fire. Some websites have it as 1836 and others 1854. It's possible that there were two fires or that the church was rebuilt in 1854. The church also was subject to a restoration in 1998.)

It is said that the church and cemetery grounds are haunted. A teacher and several of her students, who were using the church as a school, perished in the flames. She and the children were buried along side one another, but time and weather has wiped away all traces of their graves. Stories are told though that loud, unintelligible voices of children can be heard and apparitions known locally as "walkers" can be seen among the many tombstones.
Perhaps one of those "walkers" is this unknown man who hasn't found his eternal rest: 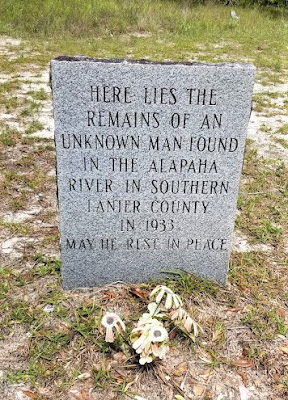 Moving right along, a quick stop for a geocache in Berrien County (GC8CZCH). And a quick roadside cemetery geocache for Atkinson County (GC6NNX5). Continuing to check counties off the list, two quick geocaches for Coffee County (GC617BC, GC6047Y), including this obvious container hidden in plain site. 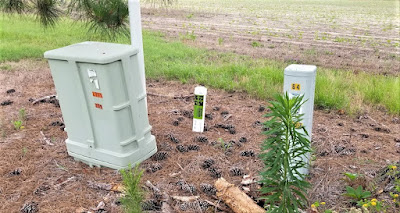 Moving right along into Irwin County, there was a quick park and grab in the town of Ocilla (GC5JPDC). Followed by a short woodsy walk in Paulk Park in Fitzgerald for Ben Hill County (GC507M3). 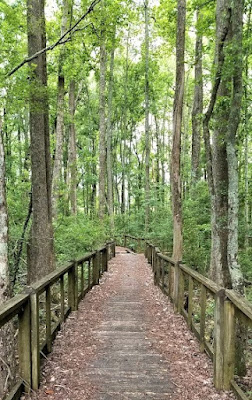 And then there's the Wild Hog Express (GC1FZ6C). Located in Wilcox County, the town of Abbeville is said to be the wild hog capital of Georgia. 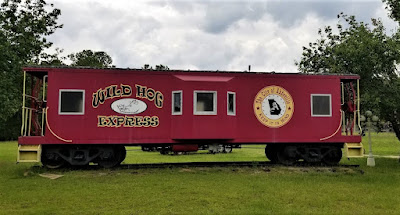 Then when I got to Eastman in Dodge County, I had originally set to find a cache at the Eastman House in town. But there were some renovations being done outside making it too difficult approach and find the cache. So I quickly look up and find a cemetery cache outside of town.
I'm so glad that was the case because you know I like cemeteries, especially with an old church, and then toss in some history too! (GC1CX07) President Jefferson Davis, his wife and children arrived at this site on May 8, 1865. He had rejoined his wife 20 miles south of Dublin. Traveling with them were the Davis’ four children, Varina, Maggie, Jefferson, Jr. and Joseph. Traveling with President Davis was John Regan, Postmaster General of the Confederacy, Captain Gevin Campbell and Lt. Barnwell. Personal aides John Wood, Preston Johnson, son of General Albert Sidney Johnson, Francis Lubbock, the former Governor of Texas, and Colonel Charles E. Thornburn, a secret agent for the Confederate Government. Traveling with Mrs. Davis and her children were Mrs. Davis’ sister Margaret Howell, Mrs. Burton Harrison, the President’s private secretary, a seven-man mounted military escort, and some of the President’s personal servants.

The following morning the president’s party crossed the present Highway 341 at approximately where Friendship Baptist Road is now. They followed this route to what is referred to as 5 points. Further along Friendship Baptist Road they would come to Levi (Tiger Bill) Harrell’s farm where they stopped for the noon meal. Turning south, they passed through what is now Rhine and then west to the river.

Mrs. Davis was to remain behind and follow the next day. Fearing the roads would become impassable due to the heavy rains that had started to fall would heighten the chances of Mrs. Davis’ capture, Preston Johnson returned to the campsite to inform Mrs. Davis to leave immediately and join her husband in Abbeyville.

Many have pondered why the Davis’ didn’t stay in the Parkerson Church located just across the swamp. The Parkerson Church is the one of the oldest churches in Dodge County having been built in June 1831. (Dodge County being Pulaski and Telfair Counties at that time.) The original building was a log house built by Jacob Parkerson, a Revolutionary War Veteran who donated the land and the first to be buried here in 1843.

The second burial here is Private William Hannibal Weekes who died in the Civil War at the young age of 28. There are less than 300 total interments at this cemetery. 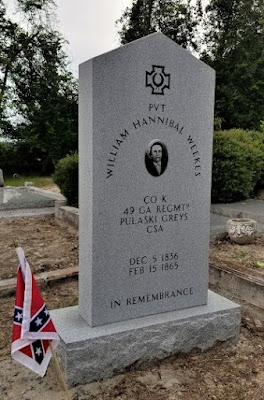 Next on the list was some more history at the Orange Hill Cemetery (GC8N95D) in Hawkinsville for Pulaski County. There are more than 3000 interments here dating as far back as 1833. There are many large and elaborate monuments here. 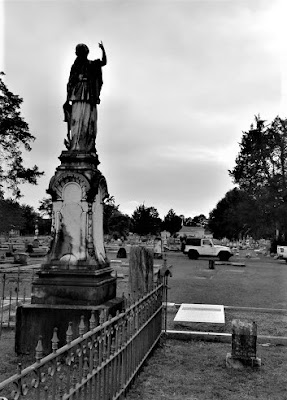 One broken headstone I'd like to tell you about belongs to 30 year old Tom Woolfolk. He was convicted of killing nine family members with a short handled axe in Macon on the night of August 6, 1887. He was tried several times in Bibb and then Perry, Georgia and was publicly hung on October 28, 1890. Up until the last minute he proclaimed his innocence. He was one of the last people to be hung before they did away with public hangings.
"The Shadow Chasers" by Carolyn DeLoach, (Woolfolk revisited), is a book about this case. The author uncovered much undiscovered evidence and was able to conclude that the actual murderer was Simon Cooper, a hired hand of the family. After Cooper's death, a diary was found that he had written, notating the Woolfolk murders just as Tom had stated. He had also written a statement, "Tom Woolfolk was mighty slick, but I fixed him. I would have killed him with the rest of the damn family, but he was not at home." 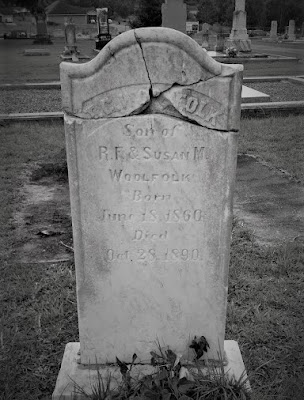 The victims are buried in Macon's Rose Hill cemetery. Its reported that thousands of people also came to Macon for the funeral. That they lined the streets of what is now Spring St. and Riverside Dr. as the horse drawn hearses went by. There weren't enough hearses in Macon/Bibb County to accommodate all the victims and many had to be borrowed from surrounding areas. The victims were Richard F. Woolfolk, father, then aged 54; his wife Mattie H (Tom's stepmother), aged 41; their six children, Richard F. Jr., 20; Pearl, 17; Annie, 10; Rosebud, 7; Charlie, 5; baby Mattie, 18 months old; and 84-year old Temperance West, a relative of Mrs. Woolfolk.
Tom is buried beside one of his sisters from his Father's first marriage to Susan M. Woolfolk. He was the youngest of 3 siblings from the first marriage. His mother passed away shortly after his birth at the age of 24. The sisters from the first marriage were not living with their father at the time of the murders.
One final quick roadside geocache (GC40DP0) in Twiggs County before calling it a day.
We found a total of 14 geocaches today and managed to pick up 11 new counties for our geocaching map. I hope you enjoyed the ride-a-long. Another big day tomorrow as we continue making our way through Georgia on our way to North Carolina.
To follow along on our travels and keep up with my latest blogs, you may do so here of course. But also by using you favorite of these social media platforms: Facebook, MeWe, Gab, Reddit, Parlor, Twitter, RVillage, GETTR and Instagram. These all link directly to my profile. Again, please feel free to comment and / or share.
Posted by Mark at 9:23 AM