2020-06-04: More Geocaching Through the Backroads of Georgia Counties and a Confederate P.O.W. Camp

So on this second day of our roadtrip through the backroads of Georgia, on our way to North Carolina, we still didn't get very far. After nine hours we've barely gone 200 miles from where we started this morning. Also, we only managed to find 6 geocaches located in 4 new geocaching counties. However we did find a 20 year old geocache that was hidden way back in June 2000! There were a lot of cool historical sites on the agenda today. Let's go for a drive and do some sightseeing... 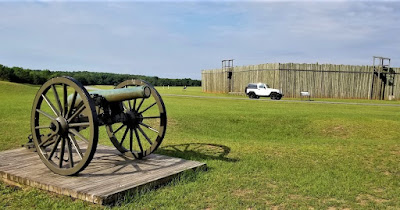 Our first stop was a virtual geocache (GCGMJY) in Andersonville, Georgia. The Andersonville National Historic Site began as a stockade built about 18 months before the end of the Civil War to hold Union Army prisoners captured by Confederate soldiers. This location became the deadliest ground of the Civil War. Nearly 13,000 men died on these grounds.

Located deep behind Confederate lines, the 26.5-acre Camp Sumter (named for the south Georgia county it occupied) was designed for a maximum of 10,000 prisoners. At its most crowded, it held more than 32,000 men, many of them wounded and starving, in horrific conditions with rampant disease, contaminated water, and only minimal shelter from the blazing sun and the chilling winter rain. In the prison's 14 months of existence, some 52,000 Union prisoners arrived here; of those, 12,920 died and were buried in a cemetery created just outside the prison walls. Conditions were so bad here that the residents of the town of Americus, 10 miles to the south, often complained of the smell blowing in their direction.

The stockade was designed in this location with the theory that a small creek passing through the middle would provide fresh drinking water upstream as it entered at the higher elevation. The lower elevation would be used as a latrine downstream and flush sewage out as the water flow exited the camp. Inadvertently, the prison was designed for death. Stockade posts slowed the drainage, and during dry spells the creek was more of a stagnant swamp than flowing stream. Dysentery swept through the camp. Overcrowding soon fouled the water, and the sluggish current failed to wash sewage out of the prison. The stream's bacteria quickly became lethal. 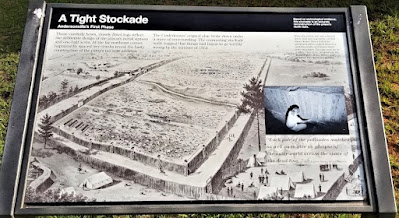 Today, Andersonville National Historic Site comprises three distinct components: the former site of Camp Sumter military prison; the Andersonville National Cemetery, where veterans continue to be buried today; and the National Prisoner of War Museum, which opened in 1998, and serves as a memorial to all American prisoners of war. 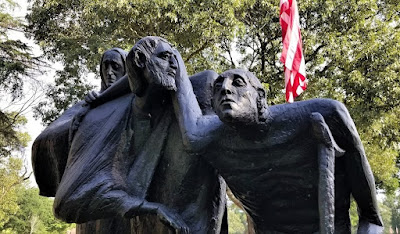 The cemetery site serving Camp Sumter was established as Andersonville National Cemetery on July 26, 1865. By 1868, the cemetery held the remains of more than 13,800 Union soldiers whose bodies had been retrieved after their deaths in hospitals, battles, or prison camps throughout the region. Andersonville National Cemetery has been used continuously since its founding and currently averages over 150 burials a year. The cemetery and associated prison site became a unit of the National Park System in 1970.

These six graves were deliberately set apart among the others. These six prisoners were buried with dishonor. Only enlisted soldiers were held at Andersonville. With no Union officers to maintain order, life in the pen became anarchy. A gang known as the Raiders roamed the prison yard, bullying, robbing, and even murdering other prisoners. Eventually, with the blessing of Commandant Wirz, the prisoners formed a police squad called the Regulators and arrested the Raiders. Before their execution, the six Raider leaders were court-martialed by their peers. Confederates provided lumber for the gallows, which was erected near the prison's South Gate. The remaining Raiders were forced to run a gauntlet formed by their fellow prisoners.

After nearly 2 hours of wandering the grounds, looking at all the large state monuments and memorials, the stockade walls, displays and information boards, and just taking it all in, it was time to get back on the road.
From there we went to another historical virtual geocache (GCGVRY). The town of Americus, Georgia plays a part in aviation history. From the statue and historical marker at the Jimmy Carter Regional Airport: "The "Lone Eagle" first flew solo in early May, 1923 from Souther Field. Charles Lindbergh had come to Americus to purchase a surplus aircraft from the World War I training center. He chose a Curtiss JN4 "Jenny." He got the plane with a brand new OX-5 engine, a fresh coat of olive drab dope, and an extra 20 gallon fuel tank for $500. Lindbergh had less than 20 hours of instruction when he soloed. He practiced take-offs and landings for a week; then having filled up with 40 gallons of gas, he set course for Montgomery, Alabama, to start his barnstorming career. Four years later Lindbergh flew alone in "The Spirit of St Louis" from New York to Paris and into aviation history." 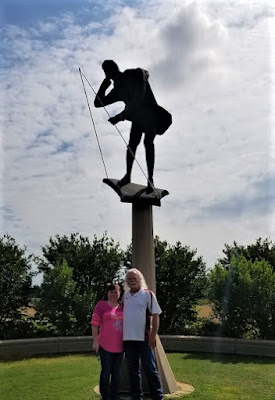 Next door at the South Georgia Technical College was our next cache (GC17V02). The land on which the college now sits was once a training facility for WWI and WWII pilots. This is also the where Charles Lindbergh trained and had his first solo flight. It was converted to a college in the late 1940's. This was one of the airplanes located on the campus grounds.

Over in Crawford County in the town of Knoxville, Georgia more history was to be found. My next two geocaches were located by the old courthouse (GC6C5C, GC3DFJG). Crawford County was created by Acts of the Legislature on Dec 9 & 23, 1822, and is named for William H. Crawford, a Georgia statesman. This building served as the county courthouse from 1823 until a new one was constructed in 2001. 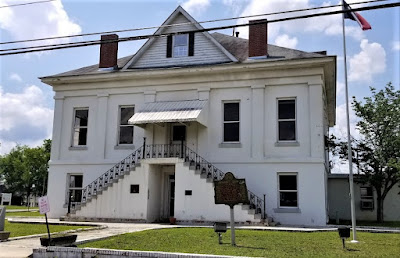 Most everyone has heard of Route 66, the Lincoln Highway, and many other historic highways which played a role in the expansion of this country. US-80/GA-22 passing through town was once known as the Federal Wire Road. This highway, created by an Act of Congress in 1810, entered the state at Augusta, passing through Warrenton, Sparta, Milledgeville, Macon and Knoxville to Coweta Town (now called Columbus). It was formally known as the Stage Coach Road. A telegraph line, the first that connected New Orleans with Washington D.C., was erected in 1848. The wires paralleled this road between Columbus and Macon giving to this section of the old highway the name of the Federal Wire Road. This telegraph line was also the first one to be erected in the state of Georgia.
Knoxville also played a role in Texas history. It was here that Joanne Troutman gave to a company of Georgia soldiers commanded by Col. William Ward on their way to fight for the Independence of Texas, a Lone Star Flag. It was carried to Goliad where James Fannin Jr raised it as the Texas National Flag.
One more that I want to mention... Alexis de Tocqueville, the 25 year old French aristocrat and author of Democracy in America, visited this area during his 1831-1832 tour of America.
Over in Jones County we stop at a park for short hike to our next geocache (GC229DF). The first iron foundry in Georgia was established here by Samuel Griswold, who came from Connecticut, settling in Clinton in 1820. He also manufactured about 1,000 cotton gins a year and ran a steam sawmill and grist mill. Moving to Griswoldville in 1849 to be on the railroad his mansion and factories were burned by Sherman in 1864 when he was making pistols and ammunition for the Confederacy. He died in 1867. Daniel Pratt of Temple, NH, later designer of the Alabama capitol, was at one time Griswold's partner. 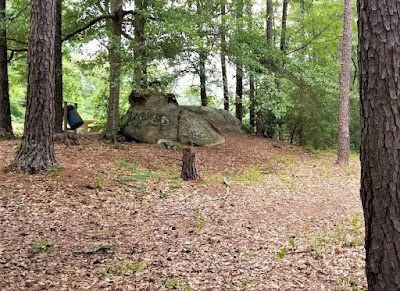 Moving right along we made a quick roadside stop for a quick cache in Jasper County (GC5RKVD).
Looping around Atlanta to the northeast side, we arrive at our final geocache of the day. This is one that has been on my bucket list for a long time. Beaver Cache (GC1D) was hidden way back in June 2000 and is the 8th oldest active geocache in the world. I had been close to it many times before, but either didn't have the time or just forgot all about it. That completes one more of my Year 2000 calendar. All that's left now is July and August. 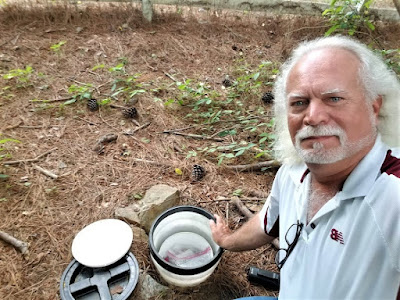 So that was Day 2 of our Florida to North Carolina roadtrip. Like I said at the beginning, we saw a lot but didn't get very far.
On Day 3 it was just driving straight through the rest of the way where we reached our destination at the Lake Norman Motorcoach Resort. For the next few months here working at this project, this will be home:

Come back soon as we will be exploring the backroads of North Carolina and completing the last 7 NC Counties while we're here.
To follow along on our travels and keep up with my latest blogs, you may do so here of course. But also by using you favorite of these social media platforms: Facebook, MeWe, Gab, Reddit, Parlor, Twitter, RVillage, GETTR and Instagram. These all link directly to my profile. Again, please feel free to comment and / or share.
Posted by Mark at 9:03 PM