2020-09-20: Walking Around the Historical Augusta, Georgia and Finding a Few Geocaches

On this second day of our roadtrip, we started out in Augusta, Georgia. We've passed through this city many times but never really taken the time to explore it. So this morning before we continued the rest of our drive up to the RV park in North Carolina, we spent some time checking out the historical riverfront area of Augusta. So let's take a walk through this historic community.
Founded in 1736 on the western bank of the Savannah River, Augusta, Georgia became the second town of the 13th British colony. General James Edward Oglethorpe, the colony’s founder, ordered the settlement and chose its location at the head of navigation of the Savannah River below the shoals created by the fall line. Oglethorpe’s vision was to establish an interior trading post for purchasing furs and other commodities from Native Americans to compete with New Savannah Town, a small outpost on the South Carolina side of the river. 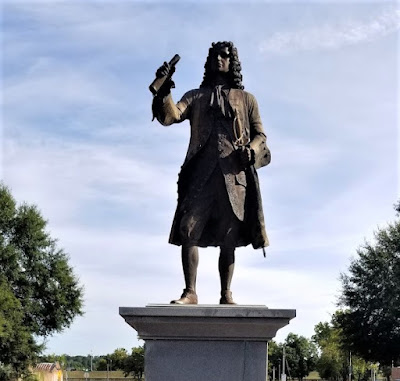 Augusta thrived as a trading post from the beginning, with several of the South Carolina traders moving their base of operations to the new settlement. By 1739 a fort was completed, and the official surveyor of the colony, Noble Jones, laid out the town. Its colonial plan was similar, but not as elaborate as the one used in Savannah. Augusta’s plan focused on one large square or plaza and was four streets deep and three streets wide. Fort Augusta was adjacent to the 40 town lots on the west side near the river. Augusta named two of its original streets for Georgia’s colonial governors: Reynolds Street for John Reynolds, and Ellis Street for Henry Ellis. These streets are still prominent features of the Downtown Augusta, Broad Street, and Pinched Gut Historic Districts. 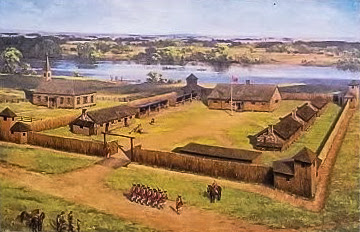 As traders populated the town, they brought their wives and began to have children. The desire for a more civilized atmosphere dictated the need for a church. As a British colony, Georgia petitioned the Society for the Propagation of the Gospel for a minister after constructing a church building in 1749. The first minister, the Reverend Jonathan Copp, arrived in 1751 and began conducting services according to the rites of the Church of England. After Georgia’s division into parishes in 1756, the Augusta District fell into St. Paul’s Parish, and the Augusta church became known as St. Paul’s Church (GC7B87M). 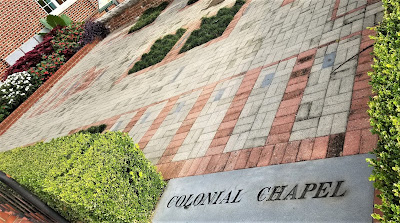 The brick pavers above layout the site of the first church in Augusta in 1749. The first church was destroyed during the French and Indian War (1754-1763). When rebuilt, the church became part of Fort Cornwallis until its destruction in 1781, in the Second Siege of Augusta, during the Revolutionary War. The Trustees of the Academy of Richmond rebuilt the third church on this property in 1789. This church was where the First Presbyterian Church was founded in 1804. Later, the congregation would build a new church on Telfair Street and move in, in 1812. The Episcopalian congregation would regain ownership in 1818. Robert Lund designed a new church which was completed and consecrated in 1821. The congregation grew and built a church school in 1843, with an orphanage added in the 1850's. During the Civil War, the property served as a hospital for the Confederacy. 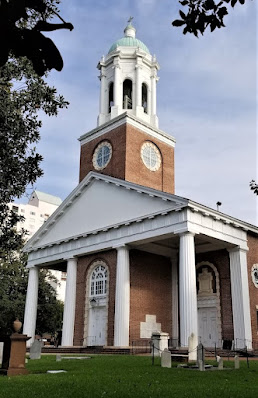 The Great Augusta Fire of 1916 burned the fourth church, along with over 30 blocks of downtown Augusta and Olde Town. Fortunately, they were able to save some of the church furniture. Services continued to be held under a tent and at the courthouse until a new home could be built. The fifth church is the one we see here today. The exterior was designed to resemble church number four, Federal Style. The interior was redesigned in the Georgian style. The baptismal font is from the first church and many items rescued from the fire, from the fourth church, are still in use here today.
According to the Find-A-Grave website, there are 166 burials scattered about on the St Paul's Church graveyard (GC1PA14) dating back to 1754. The cemetery is still used today though not as often as I'm sure even a small burial plot is prime real estate and very expensive. 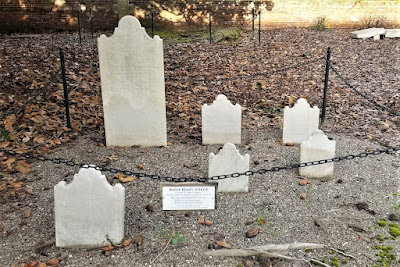 After the Revolution Augusta became the temporary capital of the new state of Georgia between 1786 and 1795, and many of the leaders of the government moved to the town. One of the most notable was George Walton, a Signer of the Declaration of Independence, who built his home, Meadow Garden, on what was then the outskirts of town. The other of Georgia's Declaration of Independence signers, Colonel William Few Jr, was buried at the St Paul's Cemetery in 1828. 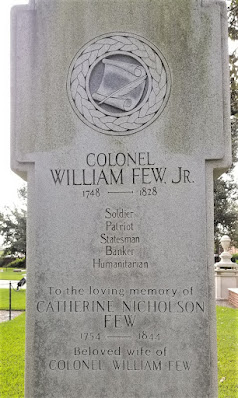 The town continued to grow in size and population governed by a group of Trustees of the Academy of Richmond County. In 1791 they added Telfair Street, named for Georgia Governor Edward Telfair. Telfair Street today is another major artery through the Augusta Downtown and Pinched Gut Historic Districts. President George Washington’s visit in 1791 was a highlight of this period. Legend has it that Augustans planted the large ginkgo tree in his honor at the proposed site of the Richmond County Courthouse, constructed in 1801 and now known as the Old Government House. The Trustees of the Academy built a new school building in 1802, the old Academy of Richmond County.

As Georgia expanded westward and the states of Alabama and Mississippi attracted many of its prosperous planters, Augusta’s economy began to stagnate. The Charleston and Hamburg Railroad in South Carolina reached a point directly across the Savannah River from the heart of downtown Augusta in 1832. In 1833 the Georgia Railroad, chartered in Athens, Georgia, began building westward from Augusta toward a yet unnamed settlement that would eventually become Atlanta. 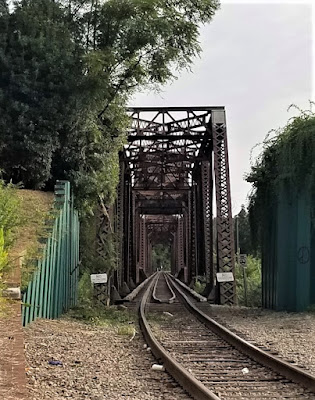 The railroad did not ensure Augusta’s future, as the tug on Americans to move westward grew ever stronger, but other factors had a positive impact on the city. Spurred by the invention in 1793 of the cotton gin, local farmers grew upland cotton in the surrounding countryside making Augusta the center of a large inland cotton market.

Augusta served as a major center of the Confederacy, providing cotton goods, shoes, guns, munitions, food, and many other commodities. In addition, the city was a religious center of the South hosting meetings for the formation of both the Protestant Episcopal Church in the Confederate States of America at St. Paul’s Church, and the Presbyterian Church in the Confederate States at First Presbyterian Church. The meeting took place there at the invitation of its pastor, Reverend Joseph Ruggles Wilson, who lived with his family in the parsonage, the Woodrow Wilson Boyhood Home. 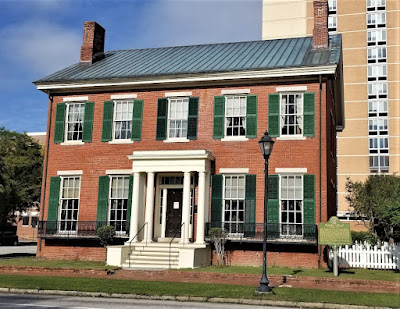 Next door to the future President’s home was the parsonage of First Christian Church, home of future U.S. Supreme Court Justice Joseph R. Lamar. Wilson and Lamar, both sons of prominent Augusta pastors, were best friends as children. 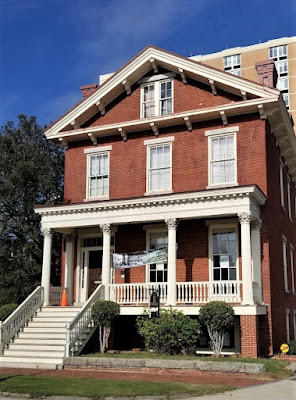 Following the Civil War, Augusta’s economy struggled but rebounded with the enlargement and expansion of the Augusta Canal in 1875. Several large new cotton mills were built along its banks. As the old city continued to expand, most religious denominations realized the need to establish a second congregation in the western end of the city, and often a third or fourth in the suburban areas. With the expansion of the Augusta Canal, the city was once again a thriving center of a cotton economy. Cotton warehouses lined Reynolds Street between St. Paul’s Church on the east and 9th Street on the west. 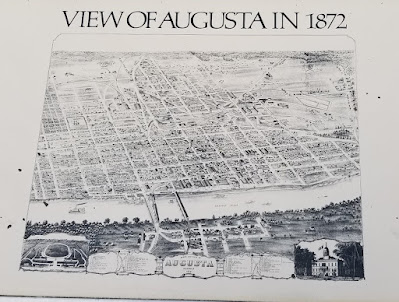 Augusta's Imperial Theatre began in 1917 as a vaudeville showcase named The Wells Theatre. On Sunday, October 6, 1918, over 3,000 cases of Spanish Flu were reported. With the death of 52 servicemen from nearby Fort Gordon, the city announced the closure of all public venues, including the theatre. The quarantine began October 7, and during this time Jake Wells encountered great financial difficulties. He sold The Wells to Lynch Enterprises. On November 27, 1918, shortly after the sell, the quarantine is lifted and the theatre opened two weeks later. The Wells Theatre's was soon changed to The Imperial Theatre. Throughout the early 1900's the theatre continued to provide the city of Augusta and the surrounding area with great entertainment. In 1929, as vaudevillian acts decreased in popularity and motion pictures enjoyed meteoric success, Miller decided to renovate the Imperial into a full-time movie house in the popular art deco style. Decades later due to the decline of the downtown area, the Imperial continued as a film theatre until it closed in 1981. In 1985 it was recognized for its architectural significance and reopened as a performing arts venue with the help of local performing arts groups like the Augusta Ballet and the Augusta Players. 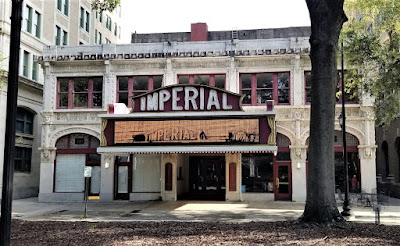 Saw this sign on another business in the historic district. I'm don't think there is a long history to research here, but I liked the appropriate name for the bar and thought I'd share it with you. 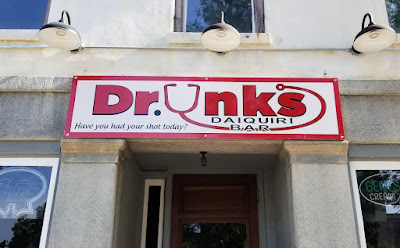 In 2005, a statue was dedicated in the historic district and James Brown Plaza in honor of the "Godfather of Soul" (GC11BDX). Born in South Carolina in 1933, the family moved to Augusta when he was five years old. He began singing in talent shows as a young child, first appearing at Augusta's Lenox Theater in 1944. As a singer, songwriter, musician and one-of-a-kind performer, James Brown has thrilled millions around the world with his hit recordings and electrifying performances. 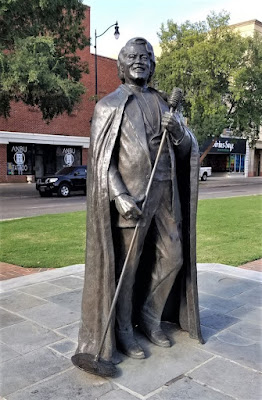 While there is much more that can be said of Augusta's history and many more places to see, we still have a long drive ahead of us to the RV park in North Carolina. So let us get back on the road for now. Until the next time...
To follow along on our travels and keep up with my latest blogs, you may do so here of course. But also by using you favorite of these social media platforms: Facebook, MeWe, Gab, Reddit, Parlor, Twitter, RVillage, GETTR and Instagram. These all link directly to my profile. Again, please feel free to comment and / or share.
Posted by Mark at 5:24 AM