Westbound and down, eighteen wheels are rollin'.... OK, so there aren't 18-wheels. But our time in North Carolina has come to an end and I gotta week to start the next project in Guy, Texas. TIME FOR ANOTHER ROAD TRIP! Time for geocaching, sightseeing, and exploring more backroads and byways between here and there.
Today we drove all the way over to Chattanooga, Tennessee. We discovered an old mill, a waterfall, a giant Harley-Davidson, a copper mine, and a historic cemetery. So climb into the GeoJeep and let me show you... 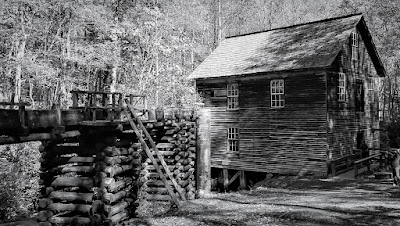 Not to take up too much time starting out, I quickly drive up to I-40 and head westbound. The first few hours were nonstop all the way to Cherokee, NC and our first geocache (GCGYMA).
For 50 years, nearby farmers brought their corn and wheat to Mingus Mill, built in 1886. The miller usually charged a toll of one-eighth of the grain the customer brought for milling. The gristmill's stone was turned by a water-powered, cast-iron turbine. From water pressure built up in the penstock at the flume's end, the turbine generated 11 horsepower, enough to run all the mill's machinery. On the second floor, the smut machine blew wheat grain free of debris, while the bolting chest separated ground wheat into grades by sifting it through fine to coarse bolts of cloth.
Mingus was the largest gristmill in the Smokies. Its 200-foot-long wooden flume brings water to the mill's turbine. As early as the 1820's, more progressive millers began using turbines to power their mills rather than waterwheels. The Mingus family sold the mill to the National Park Service in the 1930's. 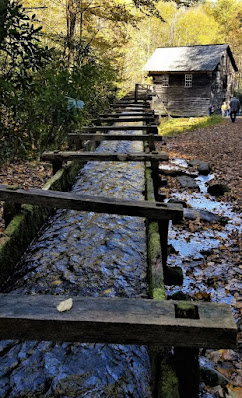 Continuing the scenic drive west on US-74, we headed for Juney Whank Falls and our next geocache (GCMBAZ). This puzzle cache requires gathering information along the 4.4 mile Deep Creek - Indian Creek loop trail. However once we arrived at the trailhead we weren't up for a long hike. So we just took the short hike to the first of several waterfalls for some photos.

Here's one of those reasons why I like driving the backroads and byways through rural towns and communities across this great country. Passing by Cherokee County Cycles, I spotted this HUGE Harley-Davidson custom motorcycle along with a couple of other cool vehicles in the parking lot. I just had to pull in and get a few pics! 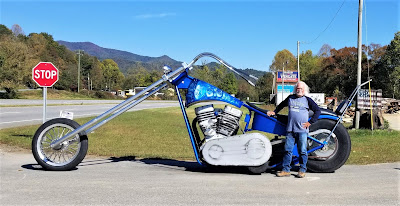 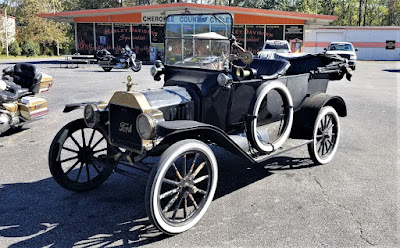 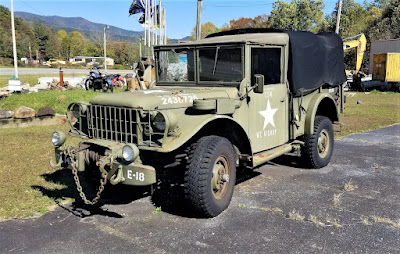 Crossing over into Tennessee, we check out the Great Copper Basin Earthcache (GCNP87) and a new caching county of Polk County. In 1843, a prospector, hoping to find gold south of the Coker Creek mine fields, instead located one of America's richest copper reserves. Over the next century, American and foreign companies chartered more than a dozen copper mines in the Ducktown Basin. The last mines closed in 1987. Many of the buildings still remain today.

We ended our day in Chattanooga at the National Cemetery for two virtual geocaches (GC5148, GC4E66). On Dec. 25, 1863, Maj. Gen. George H. Thomas, “The Rock of Chickamauga," issued General Orders No. 296 creating a national cemetery in commemoration of the Battles of Chattanooga, Nov. 23-27, 1863. Gen. Thomas selected the cemetery site during the assault of his troops that carried Missionary Ridge and brought the campaign to an end. The site Thomas selected was approximately 75 acres of a round hill rising with a uniform slope to a height of 100 feet; it faced Missionary Ridge on one side and Lookout Mountain on the other. Gen. Grant established his headquarters on the summit of the hill during the early phase of the four-day battle for Lookout Mountain.

By 1870, more than 12,800 interments were complete: 8,685 known and 4,189 unknown. The dead included men who fell at the battles of Chickamauga, Missionary Ridge and Lookout Mountain. There were also a number of reinterments from the surrounding area, including Athens, Charleston and locations along the line of Gen. Sherman’s march to Atlanta. A large number of men—1,798 remains—who died at the Battle of Chickamauga were relegated to unknowns during the reinterment process. In addition to Civil War veterans, there are 78 German prisoners of war buried here.

The Andrews Raiders Monument, erected by the state of Ohio in 1890, is among the most unique memorials in the cemetery. The granite base and die is topped with a bronze replica of “The General,” the Civil War-era wood-burning locomotive famous for its great chase of 1862. 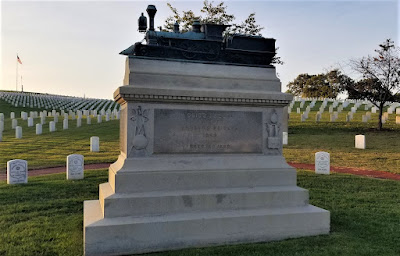 Today, the Chattanooga National Cemetery encompasses just over 120 acres and nearly 60,000 permanent residents.
After 300 miles of driving, it was time to call it a night. Tomorrow is another day with new adventures and things to see. I hope you have enjoyed today's journey and will return for many more...
To follow along on our travels and keep up with my latest blogs, you may do so here of course. But also by using you favorite of these social media platforms: Facebook, MeWe, Gab, Reddit, Parlor, Twitter, RVillage, GETTR and Instagram. These all link directly to my profile. Again, please feel free to comment and / or share.
Posted by Mark at 7:32 PM