2020-10-20: Forget Graceland, We're Going to the Grotto! From Memphis and Geocaching Across Arkansas Counties

Welcome back everyone. This was Day #3 of our roadtrip from North Carolina to Texas. Last night we ended the day just outside and east of Memphis, Tennessee. And what is the first thing you do in Memphis? Forget Graceland. We going to The Grotto!! Not widely known but something that you must see if you're ever in the area. But until then, come with us for a virtual tour of this nearly 100 year old creation. 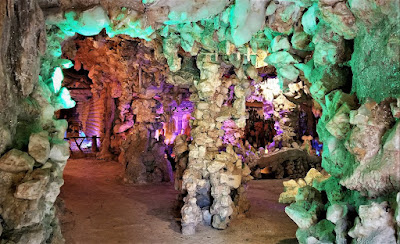 The plan was to start the day visiting Elvis's Graceland. But when we arrived at the entrance there were signs everywhere about masks being required. While I've been here before, Candy has not. Plus neither one of us are Elvis fanatics. It's just one of those places that you at least have to visit once in your life. However we just weren't up for touring this house during a "pandemic" wearing these silly masks. Which was a good thing because "Plan B" turned out to be a much better choice! 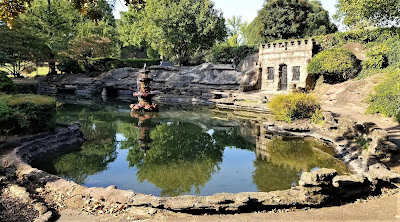 The Crystal Shrine Grotto is located in the Memphis Memorial Park and is also the coolest cemetery cache I've ever found! (GC9CBB) In 1924, E. Clovis Hinds purchased 160 acres of land on the outskirts of Memphis and transformed it into a tranquil graveyard he would call Memorial Park. A cemetery brochure describes his dream: “He sought not merely a pleasant, peaceful place of repose but an atmosphere steeped in tradition, linking the ancient past with the eternal future.”

Dionicio Rodriguez was born outside Mexico City in 1890 and immigrated to the United States in the early 1920's. He perfected a technique for chemically tinting concrete and then carving or molding it into naturalistic forms that closely resembled stones, logs, tree branches, down to such details as artificial worm holes, cracks in the wood, and peeling bark.  Rodriguez met Hinds here in 1925 and under Clovis’ guidance began the construction of what many would consider his masterpiece — the Crystal Shrine Grotto. 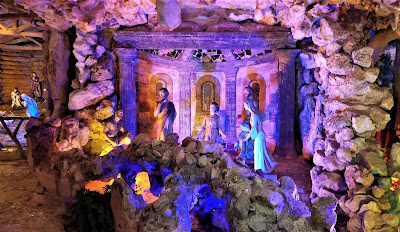 Words and pictures don’t really do it justice; only a personal visit shows the full scope of this endeavor. Using tons of tinted concrete, Rodriguez recreated scenes from the Bible and ancient literature. The Cave of Machpelah overlooks the scenic Pool of Hebron. Nearby are Abraham’s Oak, the Ferdinand IV Sunken Garden, Annie’s Wishing Chair, the Fountain of Youth, and other works — all made of cement. Perhaps the most unusual feature is the Grotto itself, a large manmade cavern carved into a hillside, with the high ceiling studded with thousands of quartz crystals. Inside, visitors can stroll past 10 panels depicting scenes from the life of Christ, which have been enhanced in more recent years by wood figures sculpted by Memphis artist David Day. 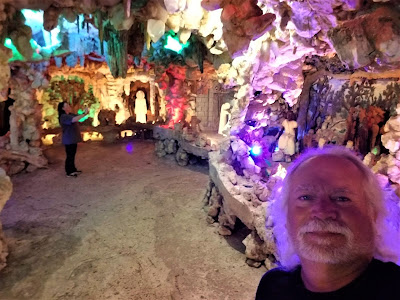 How did he carve out this grotto, or form these remarkable things, entirely alone? No one today is quite sure. Few photographs exist showing Rodriguez at work, because he was so secretive about his techniques that he often shrouded his projects in canvas until they were finished. After working at Memorial Park for several years, he left for other projects in other cities. He died in 1955 and is buried in San Antonio, but his remarkable creations live on. That’s because Dionicio Rodriguez took the time to make sure they were built to last. A marker at the Grotto explains that his artwork was “reinforced with steel and copper bar so as to ensure its existence for many centuries to come.” 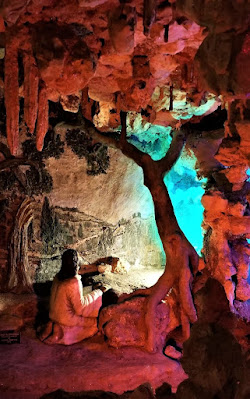 Looking at some of the gravesites in the cemetery next to The Grotto, we noriced these two musical celebrities. The first headstone shaped, like a park bench, belonged to Marshall Grant (1928 - 2011). Buried there with his wife, he was the bass player for Johnny Cash and the Tennessee Two. 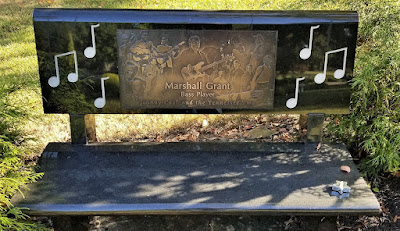 And not too far away from him was the legendary Isaac Hayes (1948 - 2008). A singer, songwriter, actor, composer, and producer, he was most known for the song "Soul Man" and the theme from the movie "Shaft." 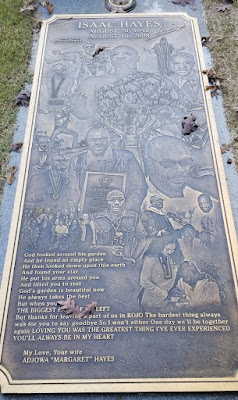 We didn't spend much time looking throughout the remainder of the cemetery. There were probably many more graves of interest considering that there are almost 80,000 people laid to rest here. But we got to keep moving...
Crossing the Mighty Mississippi River over into Arkansas, we drove south of Interstate 40 into Lee County. A quick parking lot LPC geocache (GC1GE11) was requirement enough to fill in that caching county map.
Driving south into Phillips County, we found our next geocaching stop and more musical history (GC7KM9T). The son of an Arkansas Farmer, Levon Mark Helm was born May 26,1940, In Elaine Arkansas. He died April 19, 2012 in New York city. Lavon grew up listening to the music of the Arkansas Delta region west of the Mississippi River and Radio from Memphis, Nashville, and the King Biscuit Flower hour show from near by Helena Arkansas.
Helm started up his first rock group, The Jungle Bush Beaters, while in high school. In 1957, he joined Ronnie Hawkin's band as drummer. The group ended up in Canada where new musicians signed on. Levon and his fellow backing musicians split off from Hawkins, becoming Levon and the Hawks and then the Hawks. In 1967, he rejoined his bandmates in West Saugerties, New York. The group started calling themselves "The Band" and began to create and record their own songs.
The house where Levon grew up, was moved from it's original location, Turkey Scratch five miles north, to its current location in Marvell. 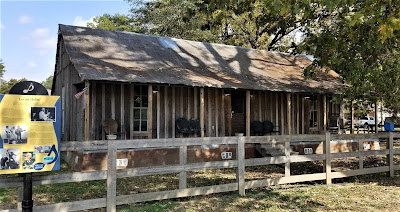 Passing through Monroe County because I already had it, we arrived in Arkansas County. Just south of the town of DeWitt was a cemetery geocache (GC2C14A). I found the cache quickly and took a quick look around. Nothing really caught my attention and I didn't want to spend too much time there. Gotta keep putting the miles behind us.
Moving right along into Desha County, Arkansas, outside the town of Dumas, was a pioneer village and museum (GC3EYQ4). This collection of old buildings from around the area give you an example of what life was like for those seeking a new opportunity on the western frontier. Like this restored pre-1850 log home with the open breezeway in between two rooms to help with ventilation. 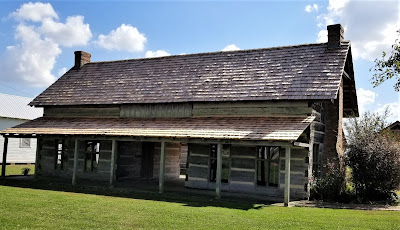 Or how about this old country church... 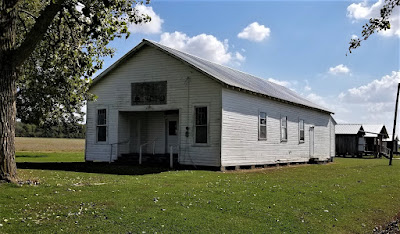 Not exactly luxury, but after working a long hard day on the farm or ranch, even the most meager thin beds would be welcome rest. Most bedrooms were multi-purpose rooms for sitting, reading, or even spinning wool or cotton into yarn or thread. 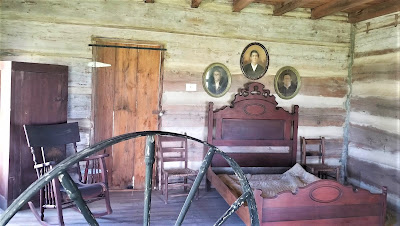 The next county over was Lincoln County and another quick cemetery geocache (GC1NY24). On the west side of Star City, Arkansas was the Leek-Drake Cemetery. With over 1500 permanent residents here and a lack of time, it was a short find the cache visit and a quick glance around. Nothing jumped out to peak my interest further, so down the road we went.
The same thing happened again in Cleveland County in the town of Rison. The Rison Cemetery geocache (GC1YE4B) was a quick find, a glance around, and move on down the road.
Now usually on my road trips, I have the targeted geocaches planned out so that I can get the needed counties to fill in the blank spaces on my geocaching map. And on occasion there's the unexpected sites that make traveling the back roads worth while too.
Passing through Kingsland, Arkansas, also in Cleveland County, we see the "Welcome to Kingsland" sign with the added "Birthplace of Johnny Cash." Well I'm not a country music fan but I do know who Johnny Cash is. And I've got some friends who are fans, one of which named his two dogs Johnny & Cash. So after a quick Google search we find the location and drive to the neighborhood. The house is gone and is now a community park. There's a church next door too. Along the street is this simple memorial. I kinda expected it to be in better condition than it was and was a little disappointed. But we can say now that we stopped at the "Birthplace of Johnny Cash." 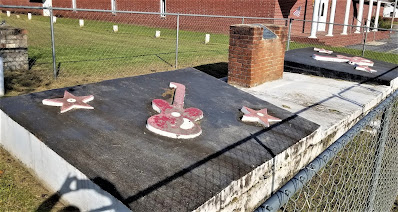 Stopping in the town of Fordyce for a geocache in Dallas County, we come to the First Presbyterian Church (GC7WCDF). The church was first organized in 1883. As the congregation grew, this was their third building and was erected on this site in 1912. Now on the National Register of Historic Places, funds are being raised to restore this old church building. 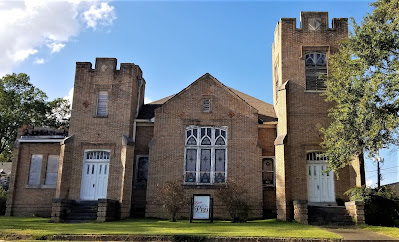 Continuing our drive westbound, US-79 cuts through the northwest corner of Calhoun County. And finding a quick roadside geocache (GC8FZ1A) at the Welcome to Thornton sign filled in another empty spot needed on our geocaching counties map.
Crossing into Quachita County, the geocache in the Salem Cemetery (GC8TN20) gave us credit for that county. There are almost 2000 interments here in Salem, but no time to look around as it is getting late in the day, dinner time, and we're both hungry. 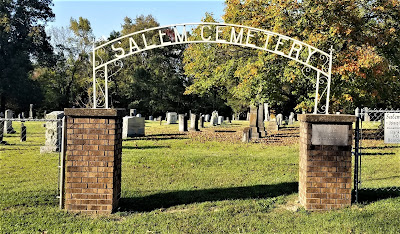 Our final geocache for the day was at the St. Matthew Cemetery (GC37P88) in Columbia County. About 400 interments, this cemetery dates back to 1867 and still serves the community. 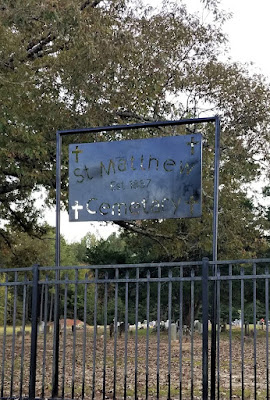 Well we still have not yet made it to Texas. I'm sure we've all heard of "football time." Like the "two-minute warning" actually takes 10-15 minutes of real time. Or when a woman says they'll be "ready in a minute" when getting dressed up for a night out, turns into an hour later.
Well the same goes for geocachers and road trips. According to Google maps, we should have crossed the Texas state line in about 5 1/2 hours from our start this morning. Here we are 10 hours later and still in southwest Arkansas. But we got to see a lot and had fun too. I mean what's the point of traveling for work if you don't get to enjoy the trip?
Time to finally get some dinner and find a place to stay for the night. We got one more Arkansas county to get to in the morning. Then finally back in Texas. I hope you enjoyed the ride. Post a comment to let me know you were here and feel free to share our blog with your friends. See you again real soon.
To follow along on our travels and keep up with my latest blogs, you may do so here of course. But also by using your favorite of these social media platforms: Facebook, MeWe, Gab, Reddit, Parlor, Twitter, RVillage, GETTR and Instagram. These all link directly to my profile. Again, please feel free to comment and / or share.
Posted by Mark at 7:48 AM