2020-10-21: Geocaching Through History in Northeast Texas and an International Border

On this last day of our NC-TX roadtrip, I only had one goal for today, a bucket list item! That was to finally make it to the last surviving border marker between the United States and the newly formed COUNTRY of the Republic of Texas. We did stop to see a few other historical sites along the way also. This would finally wrap up our fourth state in four days. So without hesitation, climb aboard the GeoJeep and let's go for a drive! 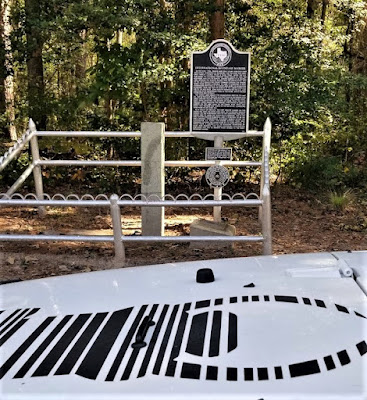 So we ended day 3 yesterday in SW Arkansas taking the backroads to pickup some new counties. The last caching county needed along our route was Lafayette County which we added first thing this morning by stopping at the Buckner Memorial Cemetery (GC38VDQ). And again resisting the urge to spend a lot of time looking around, I quickly found the geocache, signed the log, and continued into Texas.
Passing through Texarkana, we picked up US-59 and drove south towards the International Border Marker. After about an hour we stopped in historic Jefferson, Texas for a couple of virtual geocaches and a look around (GCC0AA, GCGAT8). Named in honor of President Thomas Jefferson, this town was loaded with history and had a lot to see.
The first stop around town was at the Jay Gould Railroad car. From the historical marker: "Built in 1888 by the American Car & Foundry Company of St Charles, MO, this was the private railroad car of Jay Gould (1836-1892). A native of New York, Gould was a noted financier and owner the of numerous railroad companies, including the Union Pacific, the Missouri Pacific, the International & Great Northern, and the Texas Pacific. This car, named the "Atalanta," remained in the Gould family ownership until the 1930's. 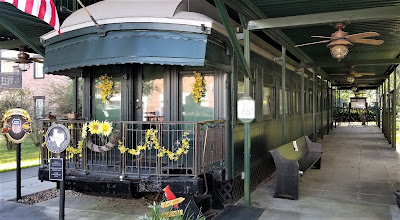 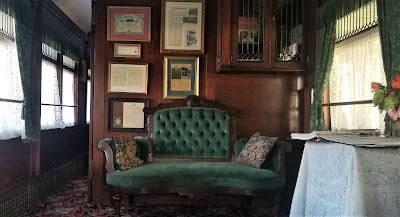 "Following Jay Gould's death in 1892, the car was used by his son, George Jay Gould (President of the Texas and Pacific Railroad), and his wife, actress Edith Kingston. The car later was brought to Texas from St Louis and used as a family residence during the 1930's east Texas oil boom. Purchased in 1953 by the Jessie Allen Wise Garden Club, it was moved to this site in 1954."
Captain William Perry was among the first settlers of Jefferson, arriving in 1840. Through his shipping business, he played an early part of the growth and establishment of Jefferson as an inland port. He bought and developed tracts of land in the area, becoming quite wealthy in the process. One of his developments was the Excelsior House. The oldest hotel in East Texas, the wood frame part was built in 1850's and the brick wing was added in 1864. Among its famous guests were Presidents Ulysses S Grant and Rutherford B Hayes, and poet Oscar Wilde. Added into the National Register of Historic Places, it was restored in 1963-64 by the Jessie Allen Wise Garden Club.. 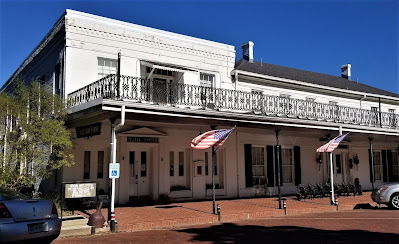 Below is the Kahn Saloon. Built during the early 1860's, this structure served as a boarding house and as a mercantile before opening as the Kahn Saloon in 1900. Temperance movement leader Carrie Nation was denied entrance here during one of her campaigns through Texas. The popular gathering place was closed after local prohibitionists won a 1907 election.
Jefferson native Marion Try Slaughter launched his career as country music singer Vernon Dalhart at the Kahn Saloon. Starred later for operas in New York, and recorded for Edison's talking machine. His rendition of "The Prisoner's Song" (1924) was the first folk ballad to sell over a million records, and led to rise of country music as an American art form. Within ten years he earned and lost a fortune, later living in obscurity. 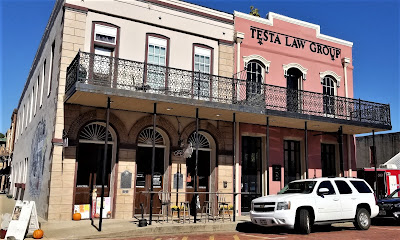 One last item of interest in the history of Jefferson, Texas. Established by Boyle and Scott about 1875, Jefferson became home to the first ice factory in Texas. They sold ice at ten cents per pound. B. J. Benefield delivered the ice to their customers. The plant was later moved to Harrisburg.
Back on the road down to my bucket list geocache (GCTBR8). "In the early 1700's, France and Spain began disputing their New World international boundary that included this area; each nation claimed what is now Texas. When the U.S. purchased the Louisiana Territory from France in 1803, the boundary was still in dispute. Leaders agreed to a neutral area between the Arroyo Hondo and the Sabine River, and the 1819 Adams-Onís Treaty formally defined the border. When Texas became a Republic in 1836, it appointed a joint commission with the United States to survey and mark the established boundary from the Gulf of Mexico up the Sabine River and on to the Red River. John Forsyth represented the U.S., and Memucan Hunt represented Texas in the work, which proved to be long and difficult.

"The survey crew began the demarcation process on May 20, 1840 at the Gulf, placing a 36-foot pole in the middle of a large earthen mound. Proceeding north, they placed eight-foot posts denoting the number of miles from the 32nd parallel. Upon reaching the parallel, they placed a granite marker on the west bank of the Sabine River. From that point, they traveled due north to the Red River, completing their work in late June 1841. 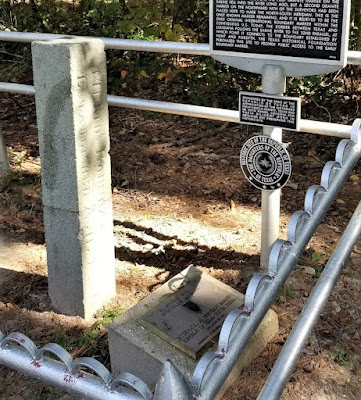 "As a result of erosion, the first granite marker on the Sabine fell into the river long ago, but a second granite marker on the northward path of the surveyors had been placed here to mark the north-south meridian. This is the only known marker remaining, and it is believed to be the only original international boundary marker within the contiguous U.S. Today, the border between Texas and Louisiana follows the Sabine River to the 32nd parallel, at which point it connects to the boundary established by Hunt and Forsyth. The Texas Historical Foundation purchased this site to provide public access to the early boundary marker."
So if you're like me and one that stops to read historical markers, this one should be on your bucket list. And as a surveyor, I thought this was especially cool that it being the ONLY one like it in the U.S.
That was all the stops for today. We continued the rest of the way to Killeen for a couple of days before heading to West Columbia. There we start our next project and will be in that area for a few months. Soon I'll be bringing you our adventures from SE Texas. See you back again soon...
To follow along on our travels and keep up with my latest blogs, you may do so here of course. But also by using your favorite of these social media platforms: Facebook, MeWe, Gab, Reddit, Parlor, Twitter, RVillage, GETTR and Instagram. These all link directly to my profile. Again, please feel free to comment and / or share.
Posted by Mark at 5:54 AM