2020-11-22: Geocaching and Sightseeing in Houston, Texas and a Visit to Howard Hughes

Welcome back fellow RV'ers, Jeepers, Geocachers, and travelers. Having a day off from the jobsite, we decided not to hand around the campground but go off on another little roadtrip adventure. Now of ALL the places I've been to, having visited 49 states, from big cities to ghost towns, my two least favorite cities have been Atlanta and Houston.
Well today we're taking a drive up to Houston, Texas to see if it can redeem itself. Mostly because there's a HUGE cemetery there that I want to go see which happens to have a geocache at the final resting place of Howard Hughes. So climb aboard the GeoJeep and let's go for a drive. 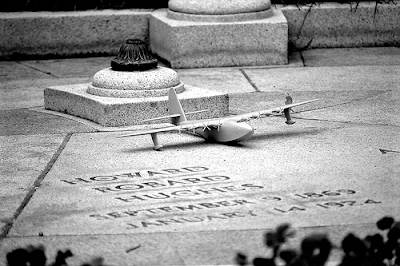 Arriving in Houston, we stopped for a quick drive by virtual geocache (GC73BD). "The Dancers" virtual geocache would have been cute. But some people are just taking this whole mask wearing thing to the extreme. These topiary bears would look fun, but do you really need to put masks on plants? 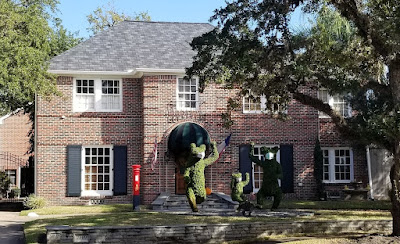 Our next stop was at Hermann Park. This is a huge park near the center of Houston with all sorts of things to see and do. There's the Miller Outdoor Theater (GC5W8YR), the Houston Zoo (GC84FF), a golf course, a Japanese Garden, the Museum of Natural Science, and a small train that runs throughout the park. 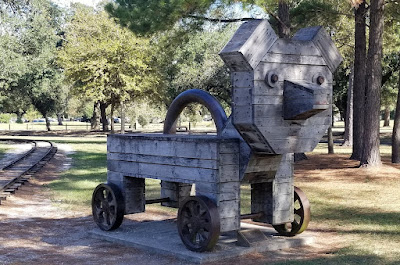 Also located within Hermann Park was this large reflection pool. The Mary Gibbs and Jesse H. Jones Reflection Pool is about half the size as the reflection pool at the National Mall in DC at 740 feet long and 80 feet wide. At the north end is this huge statue of Sam Houston, the city's namesake. 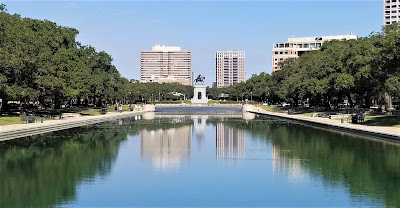 Samuel Houston (March 2, 1793 - July 26, 1863) (GC5X8PB) played a major role in the Texas Revolution and became the first President of the Republic of Texas. After serving a second term as the third Texas President, he went on to be one of the first two individuals to represent Texas in the United States Senate after statehood. 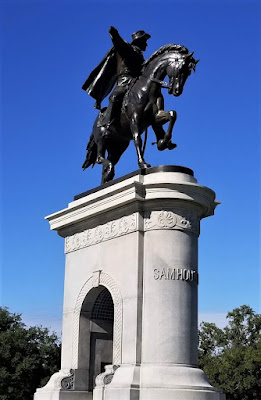 Within a few blocks of Hermann Park were two more virtual geocaches. The first was at the Children's Museum of Houston (GC8576). The other was at the Holocaust Museum of Houston, pictured below (GC8501). On March 3, 1996, just 13 years after Siegi Izakson first dreamed of the idea, Holocaust Museum Houston was officially opened for admission with Izakson proclaiming, “This means the Holocaust story will not go away.”
After a $34 million expansion, the Museum reopened in June 2019 after more than doubling in size to a total of 57,000 square feet. Ranked as the nation's fourth largest Holocaust museum, the new three-story structure houses a welcome center, four permanent galleries and two changing exhibition galleries, classrooms, research library, café, 187-seat indoor theater and 175-seat outdoor amphitheater. With more than 50 screens, mini-theaters and interactive terminals are featured throughout the Museum. 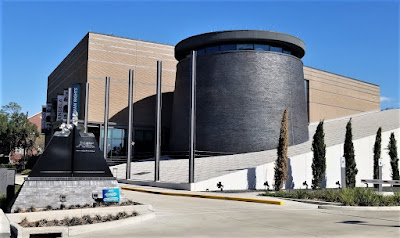 Finally arriving in Glenwood Cemetery, we're ready to grab some geocaches (GC8M3QH, GCTNRF, GC5CXCW, GC8M3QC) and take a walk through Houston's history. Glenwood Cemetery was established as a private cemetery in 1871 by the Houston Cemetery Company, which was incorporated by an act of the Twelfth Legislature of the State of Texas on May 12, 1871. After construction, Glenwood opened for business in the summer of 1872.
The gravesite on my bucket list was that of Howard Robard Hughes Jr (GCGZFY). Born December 24, 1905, Howard Hughes was the Elon Musk of the mid-1900's. He was an American business magnate, investor, record-setting pilot, engineer, film director, and philanthropist, known during his lifetime as one of the most influential and financially successful individuals in the world. He first became prominent as a film producer, and then as an important figure in the aviation industry. 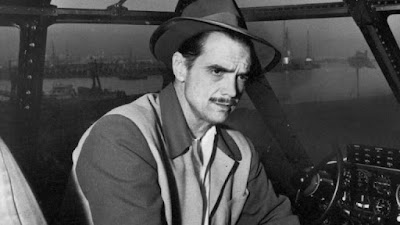 Later in life, he became known for his eccentric behavior and reclusive lifestyle—oddities that were caused in part by his worsening obsessive-compulsive disorder (OCD), chronic pain from a near-fatal plane crash, and increasing deafness. He died of kidney failure on April 5, 1976 and is buried here with his parents at Glenwood Cemetery.

The Priester family plot contains the burials of six family members starting in 1906. 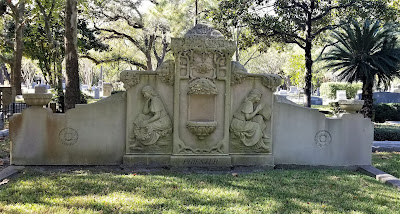 One of the many garden like settings within Glenwood Cemetery. 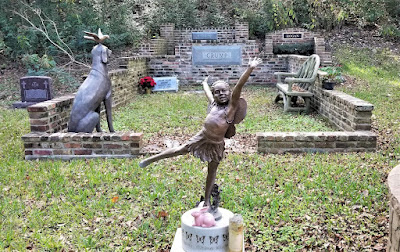 Throughout Glenwood Cemetery are these beautiful huge oak trees. They kinda make you want to go climbing. 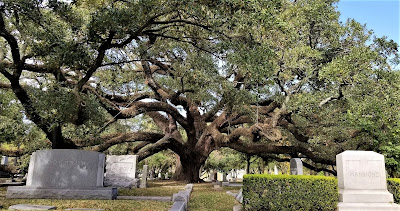 There are many other notable famous people that permanently reside within the cemetery. If you have a moment, visit the Find-A-Grave website for a list of some of them. Such as J.S. Cullinan, the founder of Texaco. Or how about Rienzi Melville Johnston who, at the age of 12, enlisted in the Confederate Army in 1961 and served as a drummer. Thomas Saltus Lubbock Sr., a Confederate Army officer and namesake for the city and county of Lubbock. And actress Gene Tierney.
Across the Buffalo Bayou and a few blocks away was our last geocaching stop at the Founders Memorial Cemetery (GC4TEJE). There are 139 interments dating back to 1836 and all but seven are pre-1900. Here you'll find many participants in the war for Texas independence and the United States Civil War. Check out the entire list at Find-A-Grave. 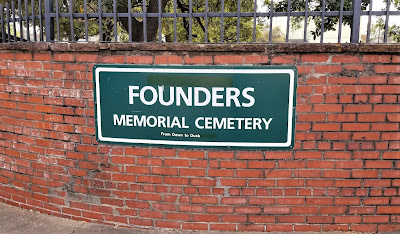 The one that I wanted to highlight the most was for John Kirby Allen, co-founder of the city of Houston. In 1836, the area of Buffalo Bayou was a humid swamp overgrown with sweet gum trees and coffee bean weeds. In this spot, two brothers from New York recognized the future commercial hotspot of Texas.
John Kirby Allen was born in Orrville, New York, in 1810. Along with his older brother, Augustus Chapman Allen, a professor in mathematics, the two moved to Texas in 1832. John Allen was an astute businessman and natural leader. At the beginning of the Texas Revolution, the Allen brothers did not enlist in the militia but instead worked on supplying and arming the troops, often at their own expense or at cost. He and his brother soon saw the area around Buffalo Bayou could readily become a major seaport. Immediately after the Battle of San Jacinto, the Allen Brothers carefully chose the site of future Houston. 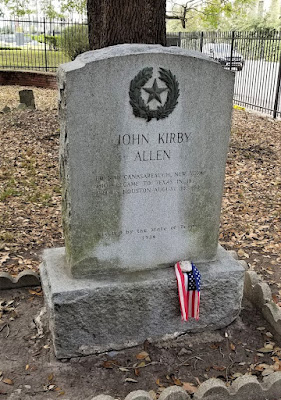 On August 24 and 26, the brothers paid $9,428 for 6,642 acres of land originally granted by Mexico to John Austin, a pioneer colonist. He and his brother ran advertisements in Texas newspapers proposing a new townsite called Houston, a name that Augustus' wife Charlotte had come up with in order to capitalize on the popularity of Sam Houston.
John Allen continued with his businesses as well as city planning, running a partnership in a shipping business with future first governor of Texas James Pinckney Henderson. Dedicating his short life to building the city he and his brother built from nothing, Allen never married. He died of congestive fever on August 15, 1838, and was buried in Founders Memorial Park, Houston, at the age of 28.
Augustus Allen eventually moved to Mexico in the 1840's. There he served as U.S. Consul for the ports of Tehauntepec and Minotitlan and was engaged in various business enterprises. In 1863, Augustus traveled to Washington, D.C., where he contracted pneumonia. He died there at the Willard Hotel on January 11, 1864. Unable to have his body returned to Houston, his widow Charlotte had him buried in Greenwood Cemetery, in Brooklyn, New York.
That's it for our tour of Houston history. It has improved on my opinion about Houston, though slightly. We went and found ourselves a nice Greek restaurant before heading back to the RV park in West Columbia. I hope you enjoyed todays adventure.
To follow along on our travels and keep up with my latest blogs, you may do so here of course. But also by using your favorite of these social media platforms: Facebook, MeWe, Gab, Reddit, Parlor, Twitter, RVillage, GETTR, Instagram, and TruthSocial. These all link directly to my profiles. Again, please feel free to comment and / or share.
Posted by Mark at 1:39 PM