2020-11-14: Visiting the Kreische Brewery Monument Hill and the German Pioneers of Texas History

Todays little road trip took us up to the Kreische Brewery Monument Hill state historical sites in La Grange, Texas. Not only the site of a German immigrant's home and business, but the final resting place of 53 Texans who were killed in the continued skirmishes with Mexico after the Texas Independence. So let's go for a ride and take a walk through history. 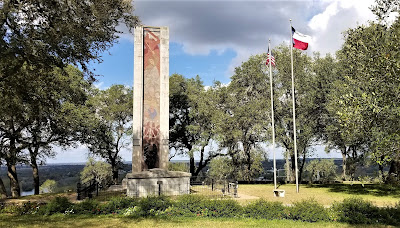 Kinda hard to drive straight there without stopping for a few other geocaches along the way. Our first stop was for an old geocache that has been around since February 2001 (GC29B). The geocache container was a second mailbox a half mile up along a geocachers driveway painted in the colors of the Texas state flag.
The next three geocaches were quick cemetery caches. The Holy Cross Catholic Cemetery (GC4GW6K) has over 1400 interments dating back to 1899. The Lissie Community Cemetery (GC4773G) is a small but well kept community cemetery with less than 150 interments dating back to the early 1890's. And the Lakeside Cemetery (GC47W3A) in Eagle Lake which has over 2600 interments which begin all the way back to the 1860's.
And then there's those unexpected crazy roadside things that make you do a u-turn and snap a quick photo! So here's this giant metal skeleton, probably left over from Halloween, now decorating a Christmas tree. The business is Fusion by Chris Vaughn. I checked out their website and he's a fabricator / designer of some really cool and unique home décor pieces. 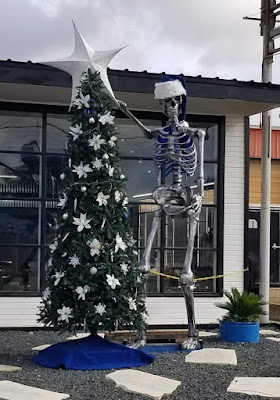 Arriving at the Kreische Brewery Monument Hill state historical sites in La Grange, Texas, we stop first at the Monument Hill Tomb as seen at the top of this page. Even after the Republic of Texas won its independence from Mexico, Texans continued to battle in skirmishes with Mexico in continuing border disputes.
Meeting at great oak tree in downtown La Grange, Captain Nicholas Dawson gathered a company of 54 volunteers to help as Texas fought Mexico in and around San Antonio. On September 18, 1842, Dawson and his men made their way to join other Texas forces at the battle of Salado Creek near San Antonio. Along the way they were intercepted by Mexican troops and fighting ensued. Later known as the Dawson massacre, the conflict leaving 36 Texans dead -- including Dawson. Their remains are entombed in a granite crypt on a bluff overlooking the town. (GC3XF1C) 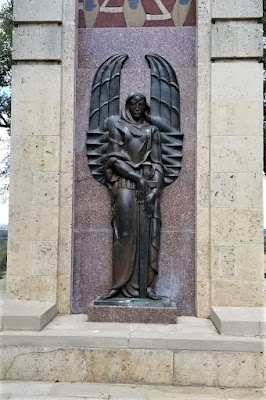 To prevent other attacks, President Sam Houston ordered General Somervell to march about 750 men towards the border. Upon reaching the Rio Grande, the general stopped the men from going forward due to a shortage of supplies. However Colonel Fisher and a group of 300 men continued on down towards the Mexican city of Mier to look for supplies. Fighting started but Fisher's men were outnumbered and eventually surrendered. The remaining men were then marched to prisons in southern Mexico.
During the forced march, the captured Texans managed to escape into the mountains at Hacienda Salado. There, many died without food, water, and shelter. While five managed to returned to the Republic, the remaining 176 men were recaptured. It was decided that every 10th man would be executed. To determine this, each prisoner would draw a bean. If they drew a white bean they live. If they drew a black bean they die. After writing letters home, the condemned men were lined up, blindfolded, and executed as depicted in the mural below. Known as the Black Bean Episode, the event cost 17 men their lives. 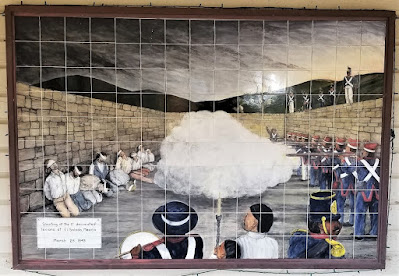 To ensure that these men were properly honored and interred, the La Grange community selected this hill for their final resting place in 1848 in a sandstone vault. The Kreische family did its best to care for the grave during their ownership of the property, but it suffered from a lack of formal oversight. In 1905, the state authorized acquisition of .36 acres here and the Daughters of the Republic of Texas raised funds for a new cover for the tomb in 1933. During the 1936 Centennial celebration, the 48-foot shellstone shaft with a stylized art-deco influenced mural was erected to mark the mass grave more prominently.
As for the Kreische family, German immigrant Heinrich Kreische (1821-1882) purchased nearly 175 acres of property in Fayette County in 1849. A stonemason by trade, he built a house, a barn, and smokehouse here on the high south bluff above the Colorado River. 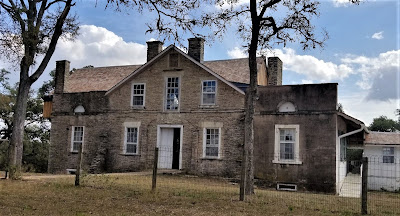 In the 1860's, Kreische began brewing bluff beer near his homesite. Situated on the spring-fed creek, the brewery (GC1D2BQ) included an elaborate tunnel system to provide temperature control for the brewing process. Bluff Beer was sold throughout central Texas and was produced until 1884, two years after Kreische died in a work related accident. The Kreische complex stands as a reminder of German heritage and culture in this region of the state. 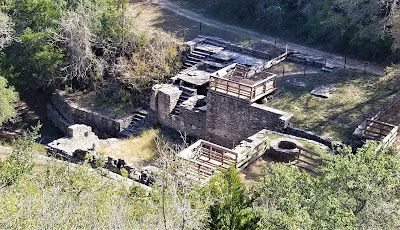 Our last stop of the day was a virtual geocache of European settlement history in Texas (GCGG9Q). The Wendish migration to Texas was impelled, in part, by the Prussian insistence that the Wends (or Sorbs, as they called themselves) speak and use the German language, even to the extent of Germanizing their names. The oppression of the Wendish minority extended to working conditions, with Wends being denied the right to do the skilled labor for which they were trained. If they were hired at all, they received less pay than their German counterparts. Prussian agrarian reform laws of 1832 dispossessed the Wends of their real property so they were, in effect, vassals to their Prussian lords.
But most intolerable was the requirement that the Lutheran Wends join the Evangelical Reform churches in one state-regulated Protestant body. The Wends believed this action would dilute their pure Lutheran faith and, rather than accept this decree, they made plans to immigrate to the New World. 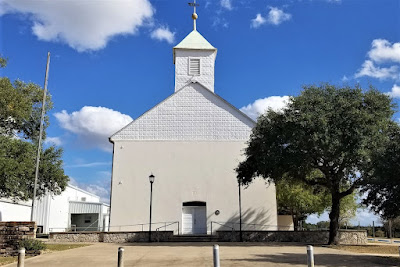 In December of 1854, an English sailing vessel, the Ben Nevis, docked in Galveston harbor loaded with some 500 immigrants from Lusatia, an area in eastern Germany comprising parts of Saxony and Prussia. These Slavic pioneers who were to settle in Lee County made the journey from their homeland, not in search of prosperity, but rather in search of religious liberty and the right to speak their Wendish tongue.
On the 150th anniversary of Serbin, Texas, this monument was erected by the church and cemetery. The historical marker states: "Dedicated to the loving memory of those lost during the 1854 Wendish migration from Germany to Serbin. From September 10, 1854, until the dedication of the church cemetery on March 17, 1855, eighty-three men, women, and children perished in route to this place. Most were buried at sea." 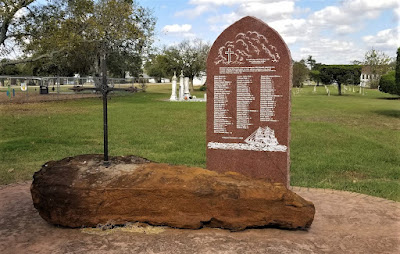 Well that was it for this little road trip through Texas history. Better than sitting in a classroom reading from a book, getting out and visiting the small rural towns along America's backroads is very interesting to me and hopefully to you too. Thank you for riding along.
To follow along on our travels and keep up with my latest blogs, you may do so here of course. But also by using your favorite of these social media platforms: Facebook, MeWe, Gab, Reddit, Parlor, Twitter, RVillage, GETTR and Instagram. These all link directly to my profile. Again, please feel free to comment and / or share.
Posted by Mark at 6:50 AM