On this Day 2 of our 3400 mile road trip from NC to TX, taking the long route, we geocached our way from Virginia through Maryland, DC, West Virginia, and into Pennsylvania history. Picking up new geocaching counties along the way, we were sightseeing places of Revolutionary and Civil War prominence that included churches, houses, cemeteries and more. So come join us as we travel back in time... 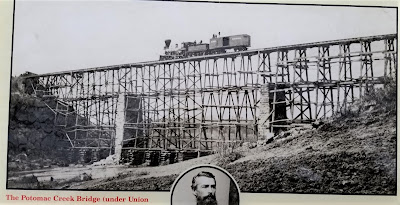 Our first two geocaches were quick urban hides to get credit for the county. In Virginia, there are not only the counties but also some of the larger cities have their own "boundaries" separate from the county. So the first of the geocaches was for Spotsylvania County (GC1FYJ1) and the other just a few blocks away was located within Fredericksburg (GC82XNE).
Our next geocache and county was up the road into Stafford County. It was a old virtual geocache at a piece of Civil War history (GCB1C). This huge stone block base is all that remains of a train bridge which spanned the Potomac Creek. The Richmond, Fredericksburg, and Potomac Railroad crossing this bridge was a major supply route for Confederate troops along the river. Early 1862, the troops were ordered to abandoned their positions here. The advancing Union troops found the bridge destroyed in an effort to slow them down. In May 1862, engineer Herman Haupt supervised the unskilled Union army soldiers in harvesting two million feet of lumber and reconstructing the bridge in just nine days (see photo at top of page). Over the next three years and continued destruction by the Confederates, the bridge was rebuilt four times using this same foundation. You can see the modern roadway through the trees on the right side.

Our next "county" geocache, one of Virginia's separate townships, was in Falls Church. Just a quick parking lot LPC (light post cache) (GC3XCZE), but it fills in a blank on the county map and keeps us moving forward.
Our next two geocaches are practically in the same spot at the intersecting corners of Arlington County, Fairfax County and Falls Church. Located in a small park in a residential neighborhood is the original 1791 survey stone marking the proposed western corner of the diamond shaped District of Columbia for the newly formed United States Capital. Maryland was donating land NE of the Potomac River, while Virginia was to donate land SW of the river forming the diamond shape. However, Virginia rescinded and we have the current half-diamond configuration of Washington D.C. today. The two geocaches located here are a virtual for the survey marker (GC6781) and a Challenge for finding 300 Virtual caches (GC572WE). 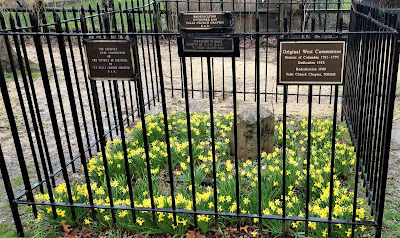 Just a short distance away, and in Fairfax County, is another Virtual geocache at this 9-11 Memorial (GCA072). There are a LOT of virtual caches in and around Washington DC, but we don't have the time at this point to get to them all. So we just try and grab a couple every time we pass through the area. 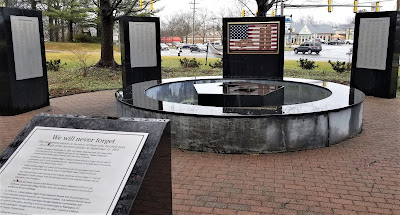 In an effort to not get too bogged down and spend the entire day in Virginia, I make another quick park & grab parking lot LPC find in Loudoun County (GC3V6QF).
We add Clarke County to our map by picking up a geocache in the County Seat of Berryville (GCXGQF). From the historical marker: "The year after Clarke County was formed in 1836, construction began on a brick courthouse based on county justice David Meade's design. The courthouse was remodeled in the Neoclassical style about 1850 when the portico and copula were added. Portraits of locally prominent judges and lawyers from the 1840's to the present are displayed in the courtroom. The last public hanging in Clarke County occurred here in 1905." 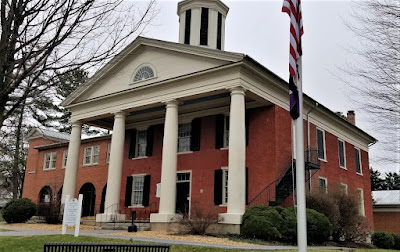 There was much to see around the courthouse square. One of which is this statue erected as a memorial to those Clarke County residents who fought and died during the Civil War defending states rights and the Confederacy. 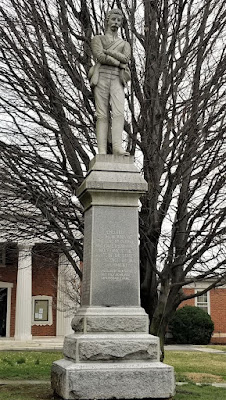 The other was the Grace Episcopal Church and Graveyard erected in 1832. Do you know what the difference between a cemetery and a graveyard? Originally graveyards were burial grounds on church property, whereas cemeteries were land specifically designated for burials. Some very old churches actually have clergy or other very prominent members buried WITHIN the church under the floor. Their flat headstones would be down the isles between the pews. 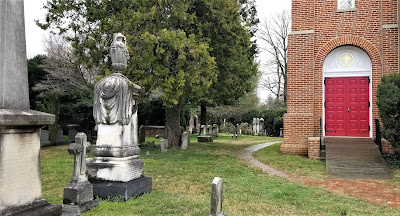 My next two geocaches are in the Winchester Township. On previous roadtrips through Virginia I had just skipped the small townships, instead just focusing on the larger and rural counties. But I'm gonna have to fill these in on the map sooner or later. Might as well get to working on them.
During the Civil War, the Union and Confederate armies each used the Frederick County Courthouse (GC4XT0K) as a hospital and a prison. The Greek revival style courthouse was completed in 1840. It was the third courthouse constructed on this location. In 1758, the first courthouse was the site of George Washington's first election to office, when voters here elected him a member of the Virginia House of Burgesses. 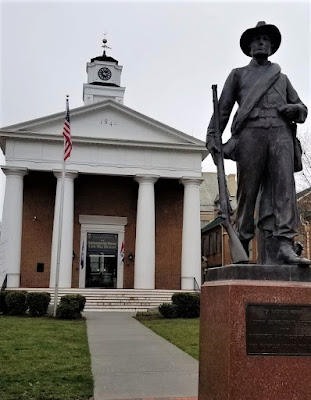 Though these buildings have not been around that long, Colonel James Wood, a native of Winchester, England, laid out and founded the new Winchester in Virginia prior to 1743. It received a charter of incorporation from the colonial legislature in February 1752. Colonel Wood was the first surveyor of Orange County from which the county of Frederick was carved by an act of the House of Burgesses passed in 1738. 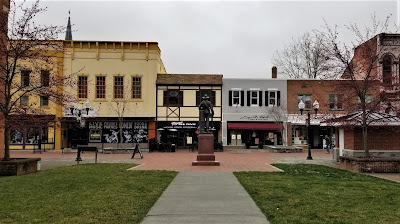 The Taylor Hotel, also our next virtual geocache (GC890KN), was a major stopping point for travelers because of its location on the Valley Turnpike and also was the center of town life. During the Civil War it was the headquarters for several commanders, most notably Confederate General Thomas J. "Stonewall" Jackson. This is the Taylor Hotel below as it looks today. 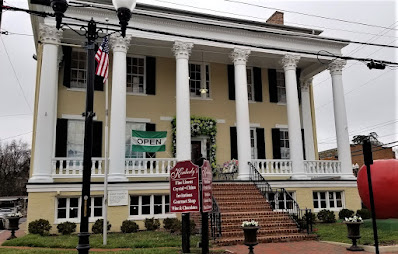 Arriving in November 1861, his stay at the hotel was short. Continuing crowds of people eager to meet the famous Stonewall Jackson, he moved a few days later to a private residence of the Lewis T. Moore house, which is now the Stonewall Jackson Headquarters Museum (GC4XT6Y) pictured below. He used this as his headquarters until March 1862 when he left Winchester to begin his Valley Campaign. 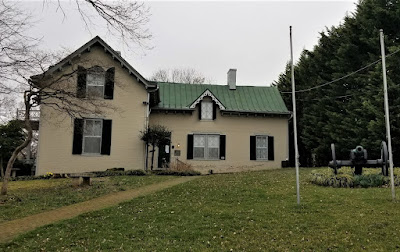 Finally exiting Virginia and making our way into West Virginia, our next stop was in the town of Middleway to grab a geocache for Jefferson County (GCM0TN). From the historical marker: Middleway, founded in the late 1700's, flourished as a trading center for most of the 1800's. About 1820, the Lutherans and German Reformed congregations joined together to build this church. Some years elapsed and the building was erected and finally the Presbyterians agreed to bear one third of the cost. Services were alternated, thus the name Union Church. 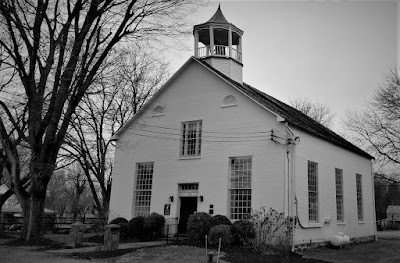 As the village declined, the Union Church and its cemetery deteriorated. In a more recent act of destruction, vandals smashed tombstones with bats and knocked others askew. The nearby Grace Episcopal Church, built in 1851, (pictured below), having acquired the forsaken property, stepped in and has restored the site to its former dignity. 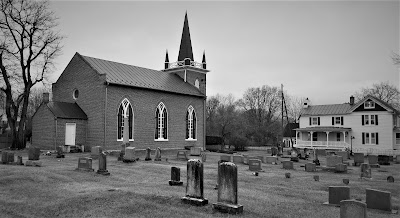 For Berkeley County, I stop for one of the famous WVTim gadget caches. Since 2012, it has had over 1400 finders and awarded nearly 700 favorite points. Located on the grounds of a fire station, it's made to look like an old fire house. I'm not gonna give you the GC code to this one cause I'm gonna tell you how it works. In order to open the compartment that contains the log sheet, you must first open the compartment which contains a package of balloons. Insert the balloon into tube on the side leaving enough around the tube for you to blow on and inflate the balloon. As the balloon expands on the inside, it opens the door containing the swag and log sheet. A fairly simple gadget cache but fun none the less. Oh and please take your balloon with you as you don't want another cacher to using the same one as you. 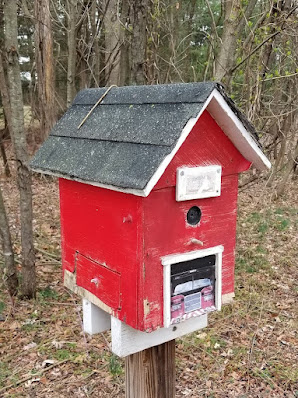 Up next in Morgan County, I stopped for a quick guard rail cache (GC4AX47) but still a significant point of history. From this point along the banks of the Upper Potomac River, Stonewall Jackson began shelling Hancock, Maryland from Orrick's Hill, January 5, 1862 after it refused to surrender Jackson's men were able to plunder a large cache of rifles, ammo, and blankets from a supply train that came into Alpine Station. After destroying remaining supplies, the B&O Railway track and the bridge over the Great Cacapon, Jackson marched his army of 8,500 men to Romney and captured it.
Crossing the bridge over into Maryland, we followed the river westbound until we got to that narrow piece of Maryland that separates West Virginia from Pennsylvania. Turning north a few hundred feet into Pennsylvania for our next geocache in PA's Fulton County and a significant piece of survey history. Here is located a stone survey marker for the Mason-Dixon Line (GC2BCKX). 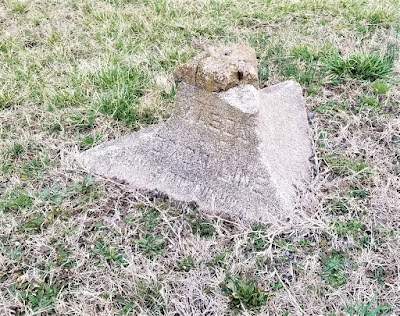 The Mason–Dixon Line was surveyed between 1763 and 1767 by Charles Mason and Jeremiah Dixon in the resolution of a border dispute between British colonies in Colonial America. The disputants engaged an expert British team, astronomer Charles Mason and surveyor Jeremiah Dixon, to survey what became known as the Mason–Dixon Line. It cost the Calverts of Maryland and the Penns of Pennsylvania £3,512/9 to have 244 miles surveyed with such accuracy. To them the money was well spent, for in a new country there was no other way of establishing ownership.
Mason and Dixon's actual survey line began to the south of Philadelphia, Pennsylvania, and extended from a benchmark east to the Delaware River and west to what was then the boundary with western Virginia. The surveyors also fixed the boundary between Delaware and Pennsylvania and the approximately north–south portion of the boundary between Delaware and Maryland. Most of the Delaware–Pennsylvania boundary is an arc, and the Delaware–Maryland boundary does not run truly north-south because it was intended to bisect the Delmarva Peninsula rather than follow a meridian.
And finally our last geocache of the day was a virtual (GCED74) at the Sideling Hill Welcome Center on I-68. The Interstate 68 highway through Maryland is also known as the National Freeway. It runs parallel to US-40 and the original National Road which was built in the 1800's. I'll talk more about the National Road more next week when we visit some of the remnants along the way including the first toll booth in the United States.
That's it for today. To follow along on our travels and keep up with my latest blogs, you may do so here of course by clicking the "Follow" button to the right. But also by using one or more of your favorite of these social media platforms: Facebook, MeWe, Gab, Reddit, Parlor, Twitter, RVillage, GETTR, Instagram, and TruthSocial. These all link directly to my profiles. Again, please feel free to comment and / or share.
Posted by Mark at 7:25 AM