Hello again friends, family, RV'ers, Jeeper, Geocachers, and Roadtrippers! Welcome to Day 3 of our adventurous road trip where we turned a simple 1400 mile drive from NC to TX into a 12 day 3404 mile sightseeing tour! On the third day we traveled through Maryland, West Virginia, Pennsylvania, and Ohio, finding some really cool historic places like this very first toll booth in the country. So come ride along with us as I share our geocaching adventures with you. 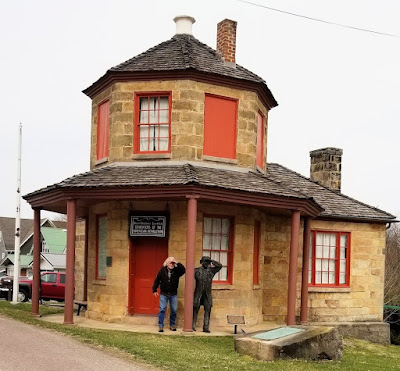 So for our first stop today, we were passing by the very northern tip of Mineral County, West Virginia. It was one of the needed counties on my geocaching map. We took the exit off of I-68 in Cumberland, MD and crossed the bridge over the North Branch Potomac River into Ridgeley, WV. It was a quick stop for a quick find near the rail yards along the river (GC3HYE8). Back across the bridge into Maryland for Allegany County. We start with a virtual geocache at Riverside Park (GC37CB). A couple of things here in this park to see. First we'll start with a historical highway. Probably the most famous of the highway's and byway's is Route 66, which we'll highlight in an upcoming blog as we travelled on it later in this adventure.
But here in Cumberland, Maryland at Riverside Park is a monument which marks the starting point of the very first federally funded road project. Envisioned by George Washington, the "Cumberland" or "National Road" as it was called, was a means to develop the continent and to unite the country. The highway was promoted by Thomas Jefferson and authorized by Congress in 1806. Construction work began in 1811 and this monument was erected in 2011 at the 200th anniversary. The flags that surround the monument represent each state the road traverses and one for the U.S. flag of 1811. 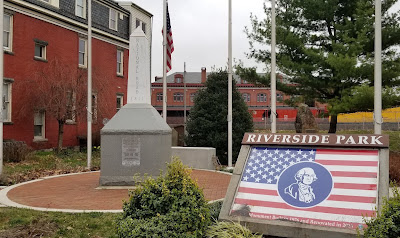 Also located within Riverside Park is George Washington's Headquarters. From the historical marker: "Our founding father spent much of his time in this vicinity while a young man as a surveyor, ambassador, aide-de-camp to General Braddock, and Commander of the Virginia military forces. This cabin served as his headquarters during part of this time." 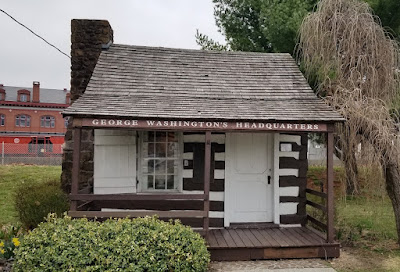 "During the French and Indian War, a 23-year old Lt Col Washington studied military customs and tactics from this cabin while General Braddock's army encamped at Fort Cumberland in May-June 1755. As aide-de-camp to Braddock, he marched with the ill-fated expedition against the French. His advice to Braddock concerning backwoods warfare was ignored by the arrogant General. Washington led the retreat of those left from the field."
"George was made commander of all Virginia forces in August of 1755 and in the next three years spent much time in this area with his forces. He wrote ardent love letters to his future bride from this cabin at Fort Cumberland. He was with General Forbes in the successful campaign against Fort Duquesne in November of 1758. As President, in 1794, Washington reviewed troops gathered here to suppress the Whiskey Rebellion in Pennsylvania." George Washington's headquarters is the only remaining structure left of Fort Cumberland.

Up on the hill overlooking downtown and the river, the Emmanuel Episcopal Church was built on the site where Fort Cumberland once stood. Constructed from 1848 to 1851, beneath the floor of the church sanctuary are portions of the cellar, magazines, and earthen works of the fort. Research shows that tunnels beneath the church were used as a station on the Underground Railroad in the 1800's. 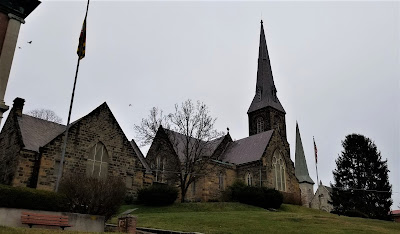 It was common for forts of this period to have rifle pits or trenches outside the walls as a line of first defense. Two water gates were along the palisade walls near the point of the fort. Trenches, tunnels, or both ran from these to the creek below. They were necessary to protect men going for water or to the storehouses located down the hill from Indians. 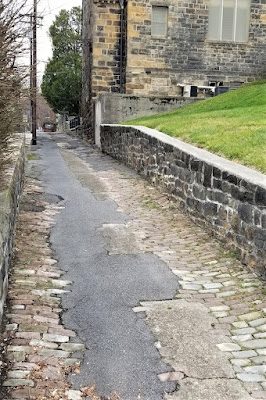 At the west end of Cumberland is the Rose Hill Cemetery (GCM8C3). With nearly 8,000 interments, the oldest dates all the way back to 1754. Col Joshua Fry was a surveyor, adventurer, soldier, map maker and a member of he House of Burgess, the legislature of the colony of Virginia. He was educated at Oxford and upon arrival he was made a professor at William & Mary College. He created an important map of Virginia along with Peter Jefferson, Thomas Jefferson's father. In the early days of the French and Indian War he was given command of the Virginia Regiment and ordered to take the French Fort Duquesne near present day Pittsburg. In May of 1754, during the advance he died at Cumberland, MD and George Washington succeeded him in command.

Built into one side of the hill is a row of family mausoleums. This one belongs to the Shriver family and contains nine of its members from 1863 to 1890.

Crossing over the state line north into Pennsylvania, we stopped for two geocaches in Somerset County. The first was in the town of Addison off of US-40 at what used to be the Old National Road that I mentioned earlier. Here is located the countries first toll booth (GC2TVCN). After several years of construction, the National Road officially opened in 1818. Decades of debate over the constitutionality and expenditure of an 800 mile road and it was eventually turned over to the various states through which it passed in 1831-1834.
Pennsylvania, like other states, erected 6 toll booths to help pay for the expense of maintaining the new highway. The Petersburg Toll House was constructed in 1835 at a cost of $1,530. Toll keeper William Condon collected $1,758.87 from Nov 10, 1840 through Nov 19, 1841 and received a $200 salary and the use of the building for his family. The toll collections ended in 1906. 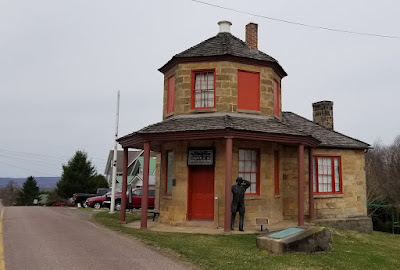 Iron toll gates were added in 1836. Leading into the park across the street is a walkway between two columns. These may have been the ones that held the gates in place. 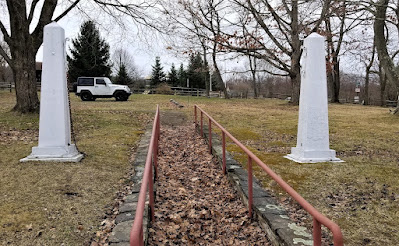 Posted on the toll house is an old "Rates of Toll" sheet listing the prices for all the various horses, wagons, pedestrian combinations that may be passing through the gates. The Petersburg Toll House underwent a complete restoration in 1997. 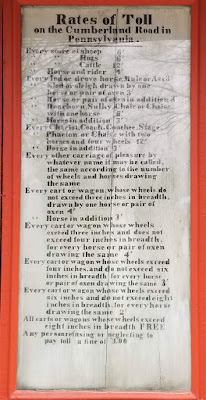 Just down the road was our next geocache at the Newbury Cemetery (GC15N55). The geocache highlighted the grave of Captain Black. Son of James and Catharine Black, Milton Black enlisted as 2nd Lieutenant on November 12, 1861 in Company H, 85th Infantry Regiment, Pennsylvania. He died on June 23, 1862 at White Oak Swamp, Virginia. According to his grave marker, he died in Camp Richmond of typhoid fever.
Upon finding the geocache and opening the lid, I was all excited seeing two $100 bills inside. I've heard stories about cachers finding cash or valuables inside geocaches. But with further inspection of the bills, I noticed the "For Motion Picture Use Only" printed on the front and back. Oh well, I found the cache but not the cash. So I left them in the container to surprise the next cachers. 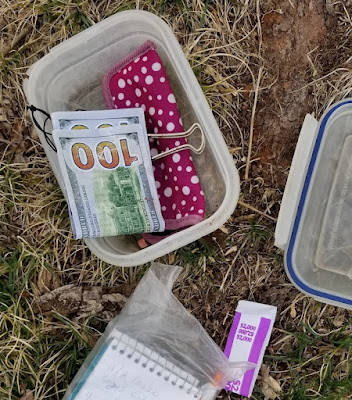 Continuing west on the National Road and US-40 just before crossing the Youghiogheny River Lake and the Great Crossing Bridge, I saw this old abandoned building on the side of the road and had to pull over for a closer inspection and photos. After doing some research, I still don't know what this place actually was at one time. It kinda looks like it might have been a restaurant. If any of you might have some information on this place, please leave it in the comments below. 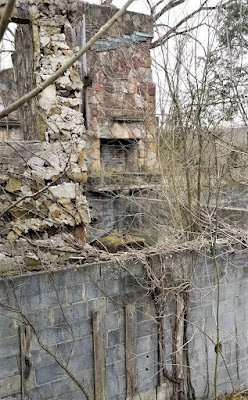 Continuing a few miles over into Fayette County, we grabbed a quick stop and go cache near the sign of a nursing home (GC3PFBR). Trying to continue momentum and putting some miles behind us, another quick park and grab for Greene County (GC7WMEG). This one was a pretty cool container hanging in a tree like a bird house. 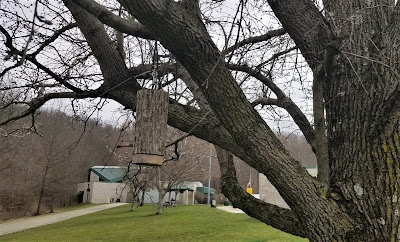 Crossing over into the narrow top of West Virginia, we made a quick exit off the Interstate 70 in Ohio County for fuel, lunch, and a quick geocache (GC4191Z).
Now in Ohio, we're back following the National Road in Guernsey County. One of the great things I like about geocaching is that some of them bring you to some historical places I wouldn't otherwise know about. This is the "S" Bridge which was built around 1828 (GC71EA). Where the National Road crossed a creek at an angle, this stone arch bridge was built at right angles to the stream flow. "S" shaped walls were then built to guide traffic around the jog from the direction of travel across the bridge and back onto the road line. An arch parallel with the stream flow and in line with the road would have been more difficult and costly to build. 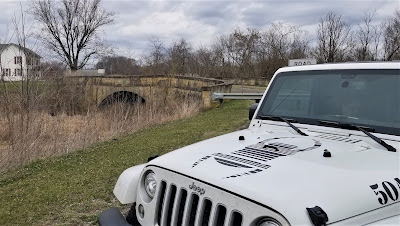 With time running out this afternoon, we quickly made it through some more Ohio counties grabbing easy caches to put the county on our map. The first was a cemetery geocache (GC1JV08) in the town of New Concord and a gas station geocache (GC2339T) in the town of Sonora for Muskingum County. I didn't spend much time in the cemetery looking for a story like usual, but I did spot a Harley Headstone. 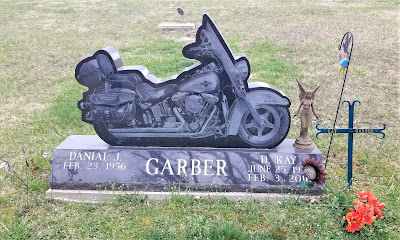 After that it was dropping down into Perry County for a roadside park and grab (GC1WPEB). And finally passing through the very NW corner of Fairfield County, it was enough for a quick LPC (light post cache GC48ZFH) in a shopping center parking lot to complete that spot on the map.
That was it for this day of our North Carolina to Texas via the LONG WAY around geocaching adventure. I hope you have enjoyed virtually riding along with us and maybe inspiring you to go and visit some of these places too. Tomorrow we finished up Ohio and made it into Indiana visiting more sites along the historic National Road. So join us again for more of our adventure.
To follow along on our travels and keep up with my latest blogs, you may do so here of course by clicking the "Follow" button to the right. But also by using one or more of your favorite of these social media platforms: Facebook, MeWe, Gab, Reddit, Parlor, Twitter, RVillage, GETTR, Instagram, and TruthSocial. These all link directly to my profiles. Again, please feel free to comment and / or share.
Posted by Mark at 7:11 AM