So today was a Geocaching day to pickup where we left off yesterday. Picking up new counties and Geocaches of interest along the West Texas and New Mexico borders. We headed west on US-62 down into Brownfield, TX and turned onto US-380 westbound in Terry County.

Before arriving at our first Geocaches for the day, I saw a historical marker on the side of the road. As we are driving around exploring new areas, not only is Geocaching a good way to find places of interest but also the historical markers. So we pulled over to find that the building before us is what remains of the ghost town of Tokio. There were two towns in Texas that went by the name Tokio. (correct spelling) During WWII, the other changed it's name to Wiggins.

This town kept the name. The first school was built in 1911. Tokio was granted a post office in 1912. In 1929, Tokio had a population of only 15. It's record high population was in the 1940's with 125. Over the years, larger school buildings were constructed until the school finally merged with the Brownfield School District after the 1945-46 school year. There are still a few residences in the area, but the town officially folded and all that remains is the old school building. 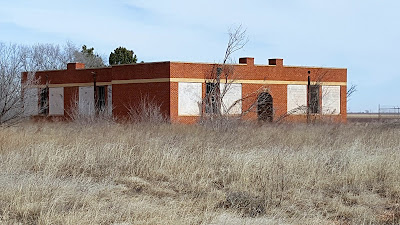 Stopping for three quick caches in the town of Plains, we continued west on US-380 to the state line. There were several caches located near the state line. The most interesting was a virtual cache (GC41C6) at the memorial for the founder of the now ghost town of Bronco, TX.

At the age of 13, Herschel Robert Field saddled his horse, left his home in Batesville, AR and braved his way through Indian territory to become a cowboy in West Texas. In 1891, he began working for the T Fork Ranch in Wichita County, Texas and later the XIT Ranch. He eventually decided to move to Arizona, but along the way he was attracted by the grazing lands in Western Yoakum County. Field saw this area as a place where a cowboy with limited means might start his own ranch. In 1903, he purchased some land and started a store right at the Texas-New Mexico line.

Soon after he opened the store, he applied for the rights to a post office. He secured the post office from the agency in Washington, but they rejected the name. A traveling salesman suggested Bronco after seeing a cowboy ride a wild horse. And that's how the town got it's name. Settlers began congregating around Field's store in Bronco. By 1912 the population grew to about 25. At it's peak in the 1960's, the towns population grew to 180. Today there are only about a dozen residences scattered about and all the businesses have closed. 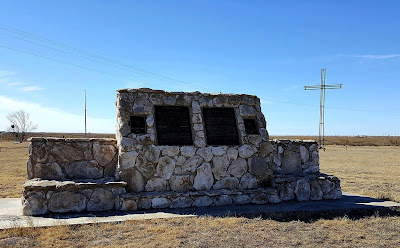 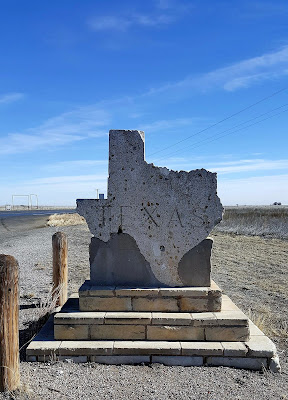 Continuing west on US-380 and into New Mexico, we entered into the town of Tatum. There was a metal fab shop there that made all kinds of sculpture and signs and we just had to pull over for a couple of pictures.

We found a few Geocaches in Tatum and turned north on Hwy 206 picking more caches every now and then. Now most of the time, you tend to find unusual out of the way sites because another Geocacher has placed a cache nearby causing you stop. But along this highway, we found one of the Roswell alien crash sites. Well maybe not really, but there's a farmer with a sense of humor! 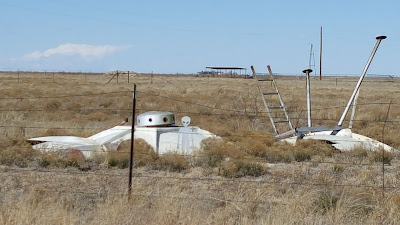 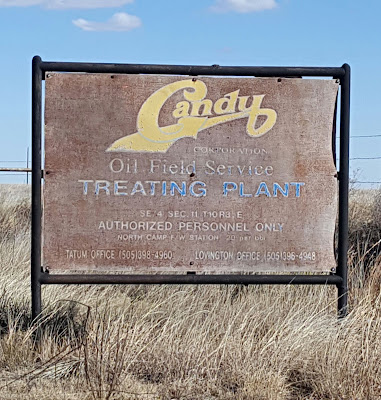 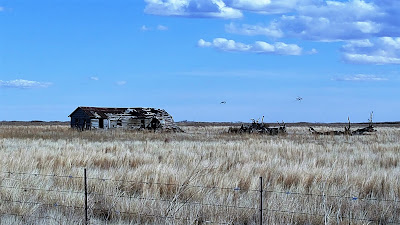 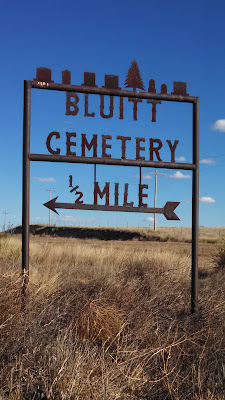 We continued up Hwy-206 to Milnesand and turned back east on Hwy 262, eventually picking up Hwy 114 back to Lubbock. Overall we found 17 caches and a few more new counties. But best of all we had a nice drive through history.
Posted by Mark at 7:46 PM