Welcome back to another one of our Geocaching Adventures. We got off on a late start this morning because we had a few errands to run around town. Then about 11:00 AM we headed east along I-20 towards Odessa. Our first stop was a new cache (GC6RCF4) and an attempt at being the First-to-Find (FTF). Upon arriving to the cache site, we find the parked car belonging to gaxguy and gaxrose. They had pulled up just moments before us and were signing the logsheet. Congratulations on the FTF. We'll settle for the 2TF. We chatted for a few minutes and then headed off to Starbucks for a much needed coffee. 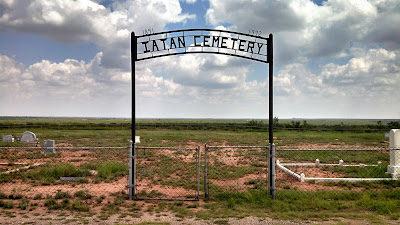 Now back to I-20 eastbound and in hunt of some more West Texas ghost towns and old cemeteries along the backroads north of Big Spring. Our next Geocache (GC1HK91) brought us to the last remnants of Iatan, TX. The Iatan Cemetery is the only thing that remains of the town of Iatan. The settlement was established in 1881 in Mitchell County when the Texas and Pacific Railway setup a station along the line there and immediately became a shipping point for cattle. Daniel Crowe was granted a post office on March 20, 1890 and it remained until moving six miles east to the town of Westbrook September 10, 1924. A school, which also served as a Methodist church, was established in 1891. In 1930 sixty students were enrolled, but the district was consolidated with the Westbrook school district in 1938. The population of Iatan in 1940 was reported at 125, but by 1950 it had declined to twenty, where it remained for at least the next ten years. By 1972 only a railroad station remained at the site. And today only the cemetery remains.

Just a few miles up the road from Iatan, was the New Hope Cemetery and our next Geocache (GC1MZEW). I couldn't find any history about this small cemetery on the internet. I also forgot to take pictures too. But there were only 8 graves there ranging between 1907 and 1918 including two unknowns and one more recent 1977. The slightly unkept cemetery sat on the outskirts of a farm by the roadside in a fenced in area. 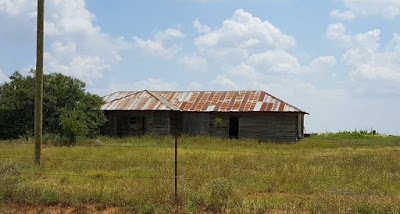 Moving on to the intersection of Farm Road 670 and Farm Road 1229, comes our next Geocache (GC1P58R). This structure is the former Rogers School. The oldest documentation comes from the Mitchell County Commissioner's Court Records dated February 15, 1908. However the school could date back to as early as the 1890's when the county first began establishing community schools. In 1934-1935 the community schools began consolidating into seven district schools. Though I could not find an exact time, it was probably during this period when the school was permanently closed. Across the street appears to be an old farm house. 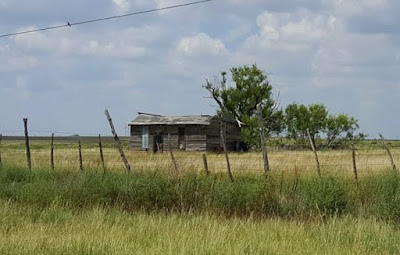 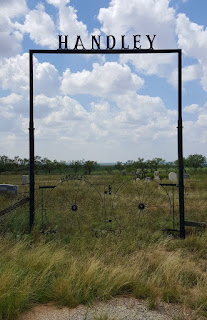 If you head north on FM1229, you'll find the next Geocache (GC1N468) at the Handley Cemetery. The site was given by John J. Handley (1842-1935), Confederate veteran who settled here in 1892, after living earlier in Georgia and in Smith and Comanche Counties, Texas. A farmer, John Handley lived to see agriculture rival ranching. The Teville (named for "T" Junction in road) post office was opened here in 1906; but closed in 1910. W.B. Berry, along with W.H. Badgett, surveyed the 4-acre cemetery in 1914. Graves were moved from across the road into this ground. Later in 1945, Mr. and Mrs. E.T. Strain gave one acre of land to enlarge the cemetery. There are four generations of Handley's family and neighbors at rest here.

The oldest marker that I saw here was among the McGuire family. Little Baby Ora, daughter of William Thomas and Rosa Lee McGuire, born on February 7, 1896 and died a few short days later on May 18, 1896. 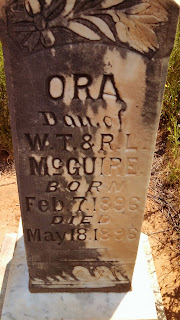 The next Geocache (GC10TB0) was just a few minutes away and the site of another ghost town. The community began in 1890 when D. T. Bozeman, a teacher in a nearby country school, settled in the area and built a wagonyard and a store. A post office was granted to the community in 1891, with Bozeman's wife, Ellen, as postmistress. The post office and town was named for a family friend, Thomas Cuthbertson. A school was started at the community in 1893 but lasted only four years. Bozeman installed a telephone switchboard in his home in 1904, and his wife served as the operator for local subscribers. In 1907 a new county school district was established in Cuthbert.

During the teens and early 1920s Cuthbert grew to include two stores, a church, a blacksmith shop, a gin, a school, and a telephone office. In 1920 the T. and P. Abrams No. 1 oil well, one of the first commercial oil ventures in the Permian Basin, was drilled just over a mile north of the town. A post office, two businesses, and a population of twenty-five were reported at the community in 1936, the year that its school was consolidated with that of Colorado City. After World War II the improvement of rural roads in the area led to Cuthbert's decline as it lost its trade to Colorado City. The Cuthbert post office was discontinued about 1960, when the town reported one business and a population of twenty-five. By 1974 only a cemetery and scattered farms remained in the area.

One of the sad tombstones was for Ruth and Baby Hester Hewett whom they both died during childbirth on February 24, 1928. 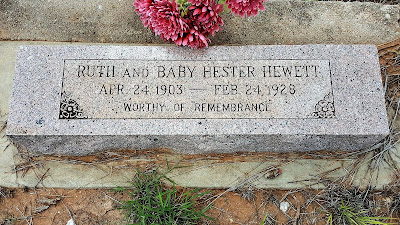 Next on the agenda was a tragic place in history. The Marcy Expedition geocache (GC1HA61) was at a historical marker along State Road 350 at the Colorado River. From the marker:

At a grove of mesquite and wild china trees by a creek near here, Captain Randolph Barnes Marcy's expedition camped October 7, 1849 while blazing the famous Marcy Trail. They saw nothing deadlier than quail and wild turkeys in the area. But the next day tragedy struck.

Lt Montgomery Pike Harrison (1826-1849), grandson of President William Henry Harrison and older brother of later President Benjamin Harrison, left camp alone to scout a ravine. When he did not return by dark, the company fired a howitzer to signal him but received no answer. Searchers the next day found signs that Harrison, always friendly to the Indians, had stopped and smoked with two Indians, believed to be Kiowas.

He was disarmed, however, taken one mile south and then shot with his own rifle. The Indians scalped and stripped the body and threw it into the ravine on Canyon Creek. They were pursued but never captured.

Marcy later reported that when his men heard of Harrison's death, many hid their faces to conceal their tears. The body was packed in charcoal and taken in a coffin made from a wagon bed to Fort Smith for burial.

Despite this tragedy, Marcy's Trail became a major wagon road, taking gold seekers to California and troops and supplies across the West Texas Frontier. 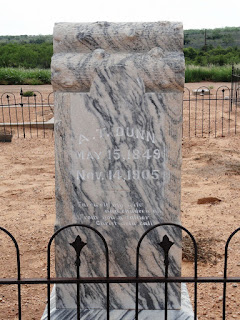 Driving over to the town of Dunn we found our next Geocache at the Dunn Cemetery (GC27ZJK). On State Highway 208 ten miles south of Snyder in south central Scurry County, Dunn was originally a watering hole for freighters carrying supplies from the Texas and Pacific Railway station at Colorado City north to Snyder and Lubbock. The town was founded by a man named W.J. Richardson and was the ancestor of the Geocacher who hid this one.

The town was named for and began on the land of Alonzo Truesdale Dunn, who's ancestors along with 8 other families came from Ireland to America in 1821, living first in Charleston, SC, then in Boligee, AL. In Dec. 1833 they began trek to colony of Sterling C. Robertson by ox-wagons and carryalls. The Dunn home became a way station and mail drop for mail and passenger hacks, and Dunn became postmaster when a post office was granted to the community in 1890. That same year a school opened. Over the years the town grew into a trade center. A cotton gin opened there in 1930, and eight years later the old Dunn well was filled and covered to make way for State Highway 208. In 1980 and 1990 Dunn had a post office and reported a population of seventy-five. 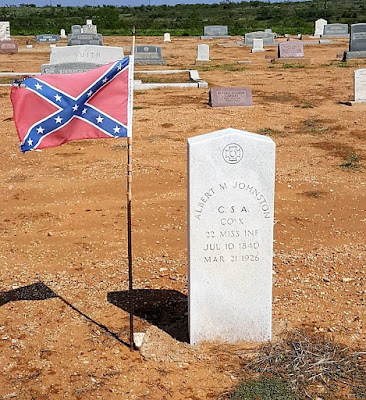 A few ordinary Geocaches later and we arrive at Ira Cemetery (GC1HHHP). Mr. Ira Green went into business sometime at this location in the early 1890's. His wagon broke down while he was traveling. When Ira unloaded his wagon to make repairs, the merchandise-starved settlers came and bought him out. So Ira Green decided to settle here and built a general store in the area sometime before 1893. The store soon became a popular meeting place and a way station and mail drop for the stagecoaches and mail hacks going north from the Texas and Pacific Railway station at Colorado City. By 1893 Ira had its first school. When the post office was established in 1896, Green became postmaster. In 1899 new lands in the vicinity were put up for sale, and many new settlers moved to Ira. The first producing oil well in Scurry County was drilled near Ira in 1923, but the Sharon Ridge field, where the well was located, was never fully exploited. Though Ira had reached its peak in the early 1900s, it weathered the later period when many small Scurry County towns were disappearing and in 1980 reported a post office, twelve businesses, and an estimated population of 485. In 1990 its population dwindled down to 250 where it is close to that today. 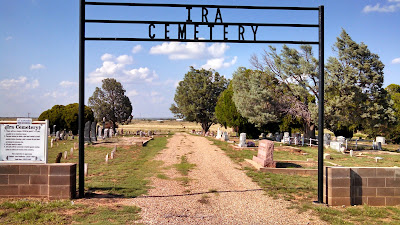 A few miles north of town up Farm Road 1609 is another small cemetery and our next cache (GC1H7RC). A somewhat neglected cemetery, Canyon Cemetery contains 24 graves dating back to 1892 up through 1970. I'm not sure why it was called Canyon as I couldn't find any information about a official town name. It may have just been a small community of settlers. 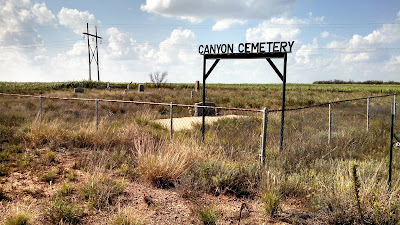 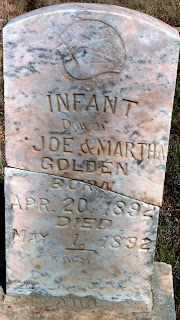 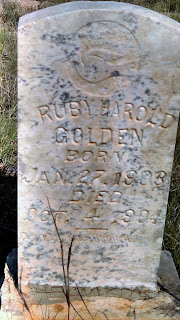 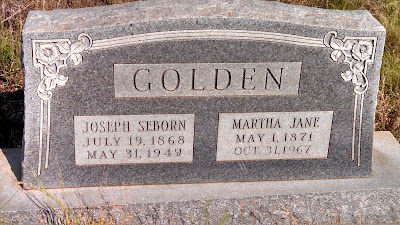 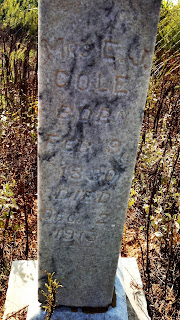 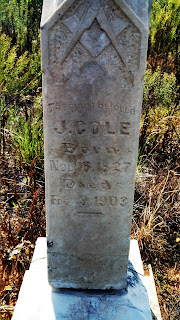 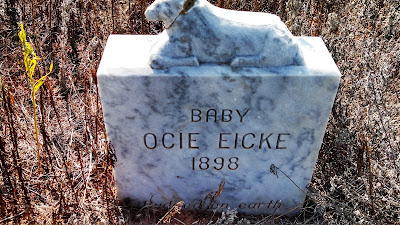 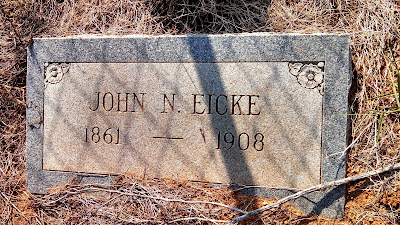 By now it was time to started heading back. Having gotten a late start and driving around these back roads all afternoon, we were hungry and in need of a bathroom! So we headed south towards I-20 and Big Spring. Just as we entered town and a few blocks north of I-20 there's the Mt Olive Cemetery and two more caches. We just HAD to stop for a quick look! Because it was a quick look, we didn't find the first cache (GC1KBQE). However, we did find the second cache there (GC1R1P5).

Finally, we stopped at McAlister's Deli before heading home. Whew! A busy day today and another great Geocaching Adventure. We also learned some history too. Thanks for stopping by and we hope you have enjoyed our blog. Feel free to share it with your family and friends. Until next time...
Posted by Mark at 9:49 PM