Welcome to our Geocaching Adventures blog. We hope you enjoy our stories and photos. So my question is: What does an American Hero, an Old Cemetery, and Tarzan have in common? Geocaching! Yes, if you are Geocaching in West Texas you'll discover all these things and more. Just follow along... 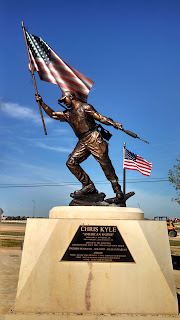 Today's adventure begins at a new memorial in Odessa, Texas honoring Chris Kyle. Since today is September 11th, we deiced to make our first cache find at this statue for an American Hero (GC6NMK1). Christopher Scott "Chris" Kyle (April 8, 1974 − February 2, 2013) was a United States Navy SEAL veteran and sniper. Kyle served four tours in the Iraq War and was awarded several commendations for acts of heroism and meritorious service in combat. He was awarded one Silver Star Medal, four Bronze Star Medals with "V" devices, a Navy and Marine Corps Achievement Medal and numerous other unit and personal awards. Kyle was honorably discharged from the U.S. Navy in 2009 and published his bestselling autobiography, American Sniper, in 2012. An eponymous film adaptation of Kyle's book, directed by Clint Eastwood, was released two years later. On February 2, 2013, Kyle was murdered by Eddie Ray Routh at a shooting range near Chalk Mountain, Texas. A former Marine with PTSD, Routh was found guilty and sentenced to life in prison without parole.

After paying our respects, we drove on to the northeast of Midland/Odessa along the backroads to try and finish finding the rural Geocaches north of Big Spring. Our first stop was a small unincorporated community called Tarzan (GC6JCBJ). Tarzan is on State Highway 176 in central Martin County. J. B. McNerlin was the first settler in the area. In 1925 a two-room school was built, and soon after, Tant Lindsay built a store which, along with the school, formed the center of the community. In 1927 Lindsay submitted a list of possible town names to the post office department. Postal officials chose Tarzan and made Lindsay the first postmaster. Both Baptist and Church of Christ congregations met in the schoolhouse until they built their own buildings, the Baptists in 1937 and the Church of Christ after World War II. The first gin in Tarzan, built in 1932, burned just four years later. 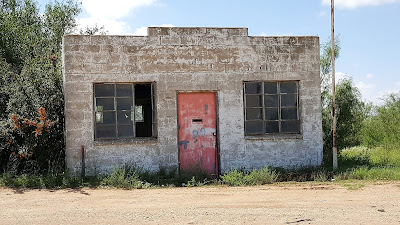 The turning point for the town came around 1938, when it was learned that a highway was to be built from Big Spring to Andrews and would pass through Tarzan. J. T. Glaze promptly built a combination grocery and gas station. After World War II local farmers organized the Tarzan Marketing Association. The discovery of oil in Martin County in the 1950s led to the establishment of the Tarzan Hot Oil Company; oil production remains a major industry, and oil wells dot the surrounding area. Throughout the postwar years Tarzan has served as an entry point into Martin County for Mexican braceros, seasonal workers usually employed in the cotton fields. In 1976 the Tarzan gin became cooperatively owned. From 1980 through 2000 eighty people lived in Tarzan.

Going east on TX-176, we come to the Grady Independent School District and our next Geocache (GC1V4G7). The Grady Wildcats school serves the nearby surrounding communities in Martin County. 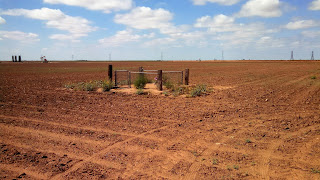 Continuing east and upon reaching Lenorah, we turned south on C3301 to find a lonely Lenorah Cemetery (GCRAKF). Former Martin County Sheriff Dan Saunders of 40 years, wrote a book entitled "Trails and Trials of a Small Town Sheriff". At the beginning of the book he told of his being raised near Lenorah. He told of helping his mother dress a child who had died and about the "Lenorah Cemetery" located south of Lenorah. In 1933, a young boy Raymond "Tommy" Hopper (age 7) and his baby sister Vita Mae Hopper (21 months) were buried there. Later a grown man was buried there but eventually was moved to another cemetery at Big Spring. Sitting in the middle of farmland, it is surrounded by a chain link fence with gate plus railroad cross ties at each corner to protect the fence. 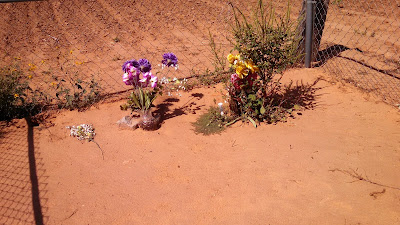 This next cemetery was probably the MOST neglected I've ever seen! Knott Cemetery (GC11A6B) was so overgrown I could barely get through to the center where the cache was hidden. The cemetery is on 5 acres of land which was originally deeded for a school. At some point a school was never built and began to be used for a cemetery. Once maintained by the surrounding farmers, it has since been overtaken by mesquite, weeds, and blowing sand from the farmland. My research has also found that it was segregated with Mexicans on the west side and Whites on the east. At this point it was so bad that in the little time I had to explore, I only spotted two headstones and a rebar cross for a third grave. Maybe sometime in the future I can setup a Geocaching CITO cleanup event. 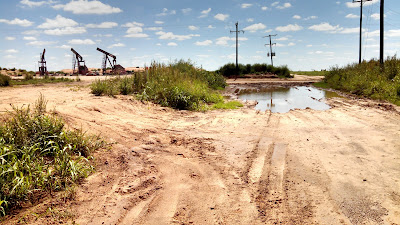 Upon leaving the cemetery going down the dirt road, we encountered this rather large mudhole! Now most folks out here drive trucks and this wouldn't be much of an issue to go through or even up the embankment through the field as you can see some had. But we are in a Toyota Prius which isn't exactly made for off-roading. Though as some of you know I give it my best shot! Well I got out and walked down the left path and the dirt was compacted enough that I didn't think I would get stuck. The angles didn't seem to bad either going up and on the ditch at the far end. So with a slight bottoming out, we made it through without having to backtrack several miles! I still want a Jeep though...

Heading north on US-87 on the way to the next ghost town, we made a quick park and grab Geocache (GC39GT5) at a roadside picnic area. A few miles later and we arrived at an old building and the next cache (GCTGYK). W.P. Soash was a land developer from Iowa who contracted with C. C. Slaughter to develop and sell 300,000 acres of land owned by Slaughter for the purpose of developing a farming community. His ability to market and promote had interested buyers coming by train to Big Spring from the East Coast and the Midwest. He transported them from Big Spring to Soash in 18 new Buick's and put them up in the Lorna Hotel, which was named after his daughter. To further impress potential buyers, Soash erected a reinforced concrete building housing the Bank of Soash, a school building, and electrical generating plant and water works. He put out the money for potential buyers to attend a barbecue in his new town for July 4th, 1909. Over three thousand people attended. By the end of 1909, a post office was established along with the increasing flow of new settlers and all was looking good for W.P. Soash. 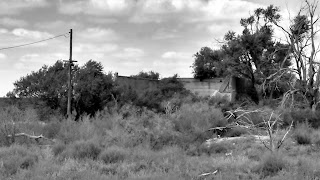 But the drought that began in 1909 and continued for three years made it difficult for crops to grow. And combine that with a promised railroad line which never materialized caused the town to begin to grumble and townspeople moving away. And when the Santa Fe Railroad finally laid down its tracks through Lamesa, 22 miles northwest, that pretty much put the nail in the coffin. Soash declared bankruptcy in 1912 and the unsold land went back to Slaughter. The post office closed in first in 1916, reopened again in the early part of 1917, but only for a few months. With another drought during the 1917-1918 months, the town officially died. Only the skeleton of the Bank of Soash remains standing. 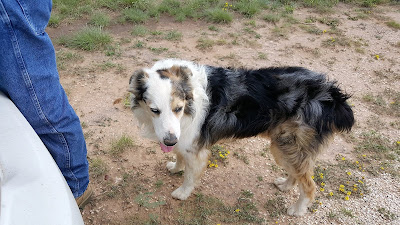 Now from what I can gather from the historical information online and some others comments, there seems to be just two families that still live in the area. One of which was just across the street. While we were parked here, I went looking for the Geocache and Candy started taking pictures of the sunflowers alongside the road. When we got a visitor. One of the dogs from across the street came up to inspect what we were doing. This one didn't even bark. The other three little dogs who stayed behind about 300 feet by the house, couldn't stop barking. Fortunately we had some dog treats in the car and gave him a few. The others didn't get any. 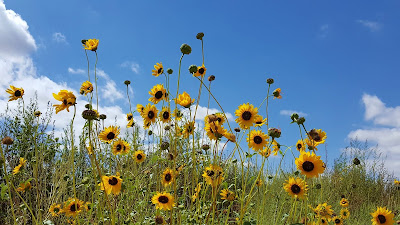 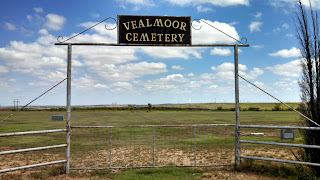 Continuing our tour of VERY RURAL West Texas, we come to Vealmoor and our next Geocache (GC1JJXV). It is thought that the town started in 1880 when C.C. Slaughter (same Slaughter as in the Soash story above) established his ranch at German Springs to the east. In the early 1920's, Slaughter's sons Robert Lee Slaughter and Dick Slaughter, his daughter Minnie Slaughter Veal (the towns namesake), and developer William P. Soash founded the new town via their Lone Star Land Company. The town had a post office by 1926 and Mae Zant was postmaster. The 1947 population figure was a mere 20 people which peaked at 190 in the mid 1960's. The post office had closed by 1980 and the population remained at 179 - a figure that's been used ever since. The cemetery has graves dated back to 1936 up to the present day. 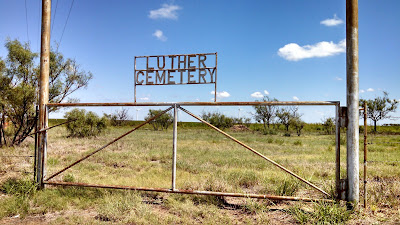 Our last Geocache for the day is at the Luther Cemetery (GC1JJXE). There isn't a whole lot of information on the town of Luther, TX. But it received a post office in 1909 which is usually the "official" beginning of a town. The town was giving it name by it's first postmaster, Luther F. Lawrence. Given the date and the fact that it was between Soash and Big Spring, I suspect that Luther was trying to take advantage of the influx of settlers headed to Soash. In the beginning however it didn't take off to well as it still only had a population of FIVE in the 1930's. Though slow and steady does it because official numbers has the current population around 330, whereas Soash has just two families. The post office closed in either 1972 or 1980 depending upon the source. Next to the cemetery was the Christ in the Fellowship Church. It looks like it had recently caught fire and was in the process of being demolished. 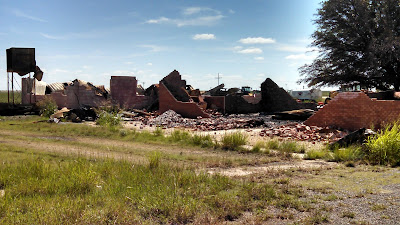 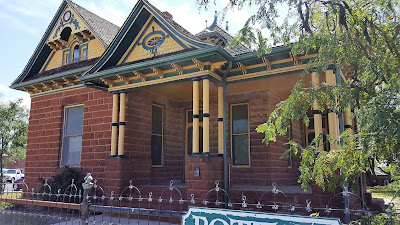 Our last stop wasn't a Geocache. But as we headed down into Big Spring to grab a bite to eat before the long drive back home we spotted this old house and had to stop for a closer look. The Joseph Potton home was built in 1901 as an investment by Mr. Potton and was leased until his retirement in 1912. Mr Potton was a Master Mechanic for the Texas & Pacific RR, an early civic leader and proud owner of the first car in Big Spring. Mrs Potton was active in St. Mary's Episcopal Guild and served tea in the English tradition every afternoon in her charming, ornate, quasi-mansion. The house was kept in the family after the Pottons' death as their daughter, Mrs. Henry Hayden and her family occupied the structure in later years. In recent years, the grandchildren have maintained it daily even though it was vacant. It was purchased with a grant from the Dora Roberts Foundation and the Tourist Development Council of the City of Big Spring in 1975. 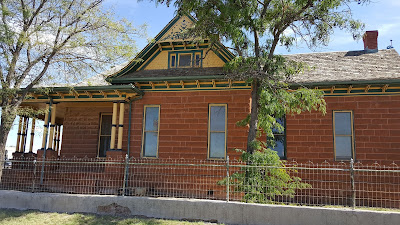 That's it for today. We hope you have enjoyed another of our Geocaching Adventures and look forward to the next trip out.
Posted by Mark at 4:38 PM