ROAD TRIP! On today's blog I'll be covering a two day road trip from West Texas to Florida. We hit the road early on the Saturday morning of October 1st. Having 1430 miles to drive in 2 days, add in fuel and food stops, and of course some Geocaching too, we've got a lot of driving ahead of us!

After leaving Monahans around 6:00 AM, a couple of hours later, we pulled into a McDonald's in Sweetwater for some McMuffins. And of course there just happened to be a Geocache (GC38PN6) there too so we had to find it as well. Within a few minutes, we were on the road again. Finally in Abeline we spot a Starbucks near the I-20 exit so we grabbed a couple coffees and another quick Geocache (GCWC1E).

Those first two Geocaches were unplanned and just happened to be nearby when making other stops. Hey, you can't NOT look for them when you're so close right?

But we did have some caches planned. When we got into Ft Worth, TX, we merged over onto I-30 eastbound and into Arlington. There we stopped for our first scheduled virtual Geocache (GC90F2). It was a beautiful statue of three horses surrounded by water fountains at this shopping center. We got the required info needed to claim the find and a few photos with GeoDog Max. 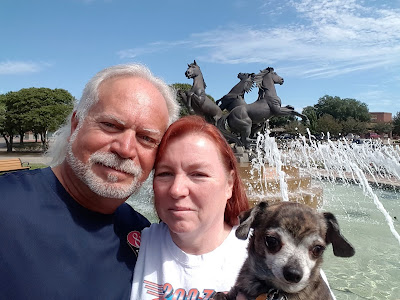 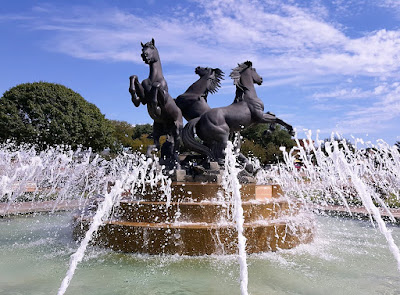 On our way to the next planned virtual cache, we passed by the Dallas Cowboys Stadium as well as the Texas Rangers Field. Well we just had to get a photo there too and grab the cache (GC15RDP) across the street! 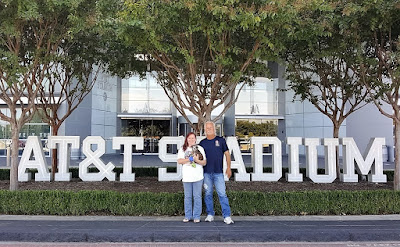 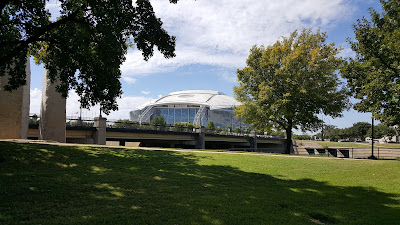 Around the corner about a block away was a nice park and another planned virtual cache stop (GC7029). From there we got a good view of Cowboys Stadium. There were also these large Caelum Moor Stones around the park and a multi-stage Geocache (GC30RJB), from which after gathering information from the stones, we were able to find the final stage. The five freestanding granite sculptures weighing a total of 540 tons will enhance the environmental landscape along Johnson Creek in Arlington’s Entertainment District. 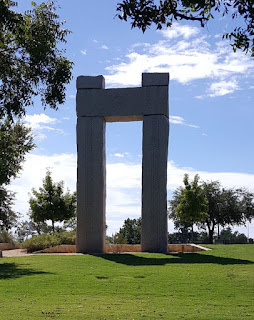 The stone monuments range in height from 8 to 30 feet. The Latin name “Caelum” is derived from a constellation in the southern skies known as the sculptor’s tool or chisel. “Moor” refers to the windswept landscapes of Scotland. The celtic names of each of the five groupings reflect the ancestry of the sculptor’s patron. Caelum Moor was commissioned in 1984 by Jane Mathes Kelton, CEO of the Kelton Mathes Development Corporation and heir of the Scottish-American television magnate, Curtis Mathes. According to the sculptor, Kelton wanted the artwork to serve as a centerpiece for a proposed business park development along I-20, reminiscent of the ancient sites of Scotland and England and reflecting of her family’s heritage. From 1986 to 1997, Caelum Moor was located at the headwaters of Johnson Creek along Interstate 20. In 1997, the sculpture was donated to the City and stored to make way for commercial development. Caelum Moor was once listed on the Smithsonian Institution’s National Registry of Art in Public Places. They were relocated to this park in 2009. 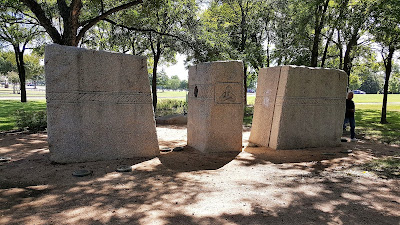 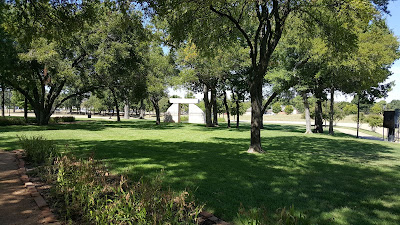 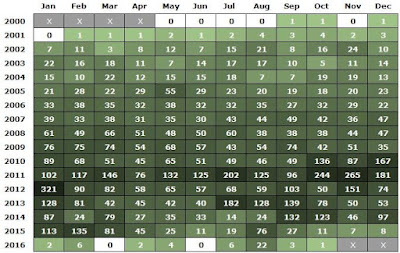 Our main reason for stopping here was to get Tombstone (GC62), a multi-cache and the oldest Geocache in Texas! Hidden on September 26, 2000, this cache also fills another empty spot on my Jasmer calendar. It's had over 1500 finds since then. It's placed in Doug Russell Park and is three stages. The last two stages are near the location of the Berachah Home and Cemetery. We walked over to the first stage easy, got the info we needed for the final north coordinates. Then we walked over to stage two and got the needed info for the final west coordinates. That's where my problem began. After frustratingly searching for 30 minutes (Candy and GeoDog Max had long been back to the car with the a/c on) for the supposedly easy final stage, I finally decided to recheck my coordinates. Well the north coordinates didn't save correctly in my phone and therefore I was searching in the wrong place! Once I put the correct coordinates in and began searching the correct location, I found it within minutes. YAY!!

The Berachah Rescue Society was organized at Waco in 1894 by the Rev. J. T. Upchurch for the protection of homeless girls and unwed mothers. Nine years later he opened the Berachah Industrial Home at this site. Ten buildings were located here including a print shop for publication of the "Purity Journal." The cemetery which contains more than eighty graves, was first used in 1904 for the burial of Eunice Williams, one of the residents. The home closed in 1935, but the site was used until 1942 as an orphanage run by Upchurch's daughter Allie Mae and her husband Frank Wiese. Most of the graves here are marked without names or dates. Many more just have a first name and year died. 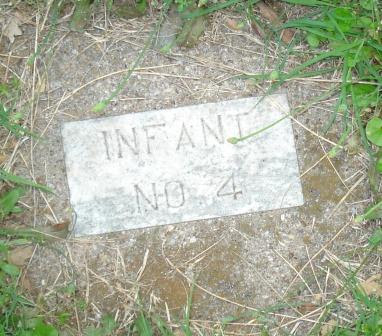 Finally back to I-20 heading east. We spent a couple of hours in the Arlington area and now we have to make up some time. So no more stops until we needed another gas stop in East Texas. And of course while the gas is pumping I checked my phone and there was a cache there too (GC4EE5P). A quick find and back on the road. It was soon getting dark and we drove over halfway into Louisiana.

As it turned out the hotel we stayed in was located in West Monroe, LA. And just around the corner was the Duck Commander Headquarters! The location of the Duck Dynasty TV show is filmed here. So before heading down the highway, we had to stop by for a few photos. 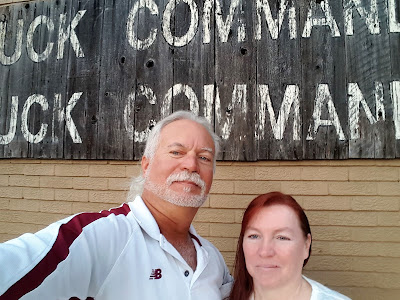 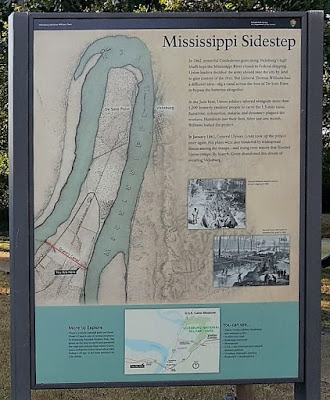 We didn't stop much on Sunday because we still had over 760 miles to go. But we stop just before the Mississippi River at Grant's Canal for another virtual Geocache (GCGDM2). During the summer of 1862, the Union's first attempt to bypass the Confederate Army at Vicksburg by digging a canal across DeSoto Peninsula failed. By January 1863, the Union had reoccupied the Louisiana shore opposite Vicksburg. Gen Ulysses S. Grant ordered work on the canal resumed. The canal was to be 60 feet wide, 1 1/2 miles long, and deep enough to float any vessel on the river. Ground was broken on January 30, black work gangs assisted by fatigue details from the Union Army began to work. Later, steam pumps and dredge boats were employed. To stop the work, the Confederates placed several big guns on the shore opposite the canal's exit but the work progressed. On March 7, the upper dam gave way, flooding the entire peninsula. Grant's Canal had failed. After gathering the information we needed to qualify for the cache find, we continued eastbound.


After about 3 1/2 hours later on US-98 in South Mississippi, it was time for a break to stretch our legs a bit. I looked up some caches ahead of us and found a cemetery just off the road with three caches (GC445DQ, GC445DV, GC445DP).

There was a gas and food stop along the way, but nothing to write about. We arrived in St Augustine, FL about 9:30 PM. A long day of driving. Sleep was soon thereafter!
Posted by Mark at 8:21 PM