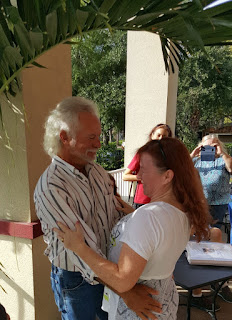 Welcome back! Wow what a week! We're so glad to be back in West Texas. We had gone to Florida for a wedding... OURS. But so did Hurricane Matthew.

After changes in venues a couple of times, uncertainties, and eventually the vendors having to cancel due to storm damage, the only certainty was the officiant. He was still able to make it wherever we ended up.

So we decided to just meet up at THE Starbucks in Orlando near Disney where we had our first date. Most of our family and friends had to stay behind and attend to issues brought about by the storm. But we still had a great group of family and friends show up to support us.

After a simple and casual ceremony reciting our "I Do's" on the Starbucks patio, we headed down the street to Carrabba's where most of the group joined us for dinner. It was good being able to catch up with our Florida friends. We thank everyone for joining us and one day in the future we'll renew our vows in the formal ceremony we had originally planned. Just not during hurricane season!

Already into the evening, we drove only a few hours to the north only as far as Ocala, FL to find a hotel for the night. The first one was booked with power company workers in town for hurricane repairs. The next one had a room available and we checked in.

Getting a late start on Sunday morning, we drove down the road to Bob Evans for a hot and hearty breakfast. After breakfast and a nearby cache (GC2ZX7A), we drove onto I-75 northbound and began our journey back to Texas. A couple hours later, we stopped at the last rest area on I-75 before turning onto I-10 for a quick and another cache (GC6RDEQ).

Several more hours later and approaching Tallahassee, we exited the Interstate for another Geocaching break. There was a Virtual Cache (GCA632) there that I've had on my "watch list" for some time. It was about a road leading into a small housing development in an unincorporated part of the county. They residents got tired of getting the county to grade their street on a regular basis so they created their own solution. They used some recycled materials and no longer needed grading of their road. Now I can't tell you what they used or post a photo. If I did, that would give you the answer and you could just easily log a find of the cache without actually going there. A couple other caches on the way back to I-10 and we're good for another few hours.

It was Earthcache Day and we still needed to find one to receive our souvenir. This morning while eating breakfast, I was looking up easy earthcaches along the way that wouldn't take us too far from our route. The one I found was west of Tallahassee and to the south of I-10. The cache (GC1VABG) was located at the entrance to this dolomite mine and processing center. There was a large rock there that had impressions of fossils on it. So we stopped to check it out and got the required information needed to claim a find.

Two more caches later and we made our way down to Pensacola, FL for the night, just in time to enjoy a sunset at the marina. 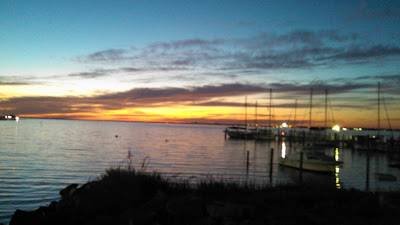 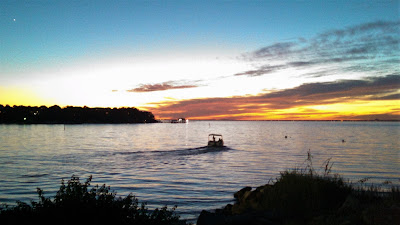 This morning we awoke and headed over to the beach before getting back on the highway. We're not going to be seeing a beach in West Texas, so we needed to enjoy the moment. And of course, we needed to find a cache while here also. There were a lot to choose from, so I picked the one that had the most favorite points (GC316D0). 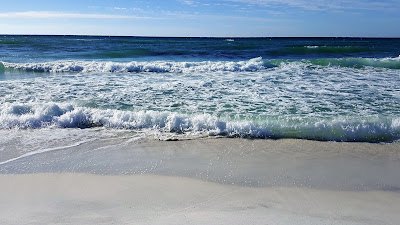 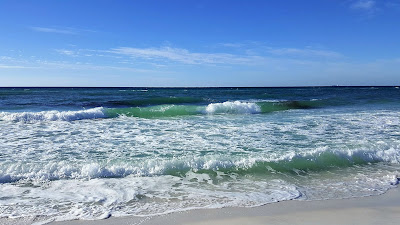 Leaving the beach and back to downtown Pensacola, we stopped at the Veterans Memorial Park for a Virtual Geocache (GC991D) and a Traditional Geocache (GC2ZYPM). There were a lot of statues and even a slightly smaller version of the Vietnam Wall. 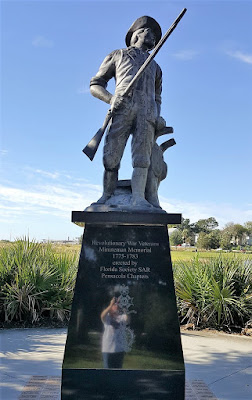 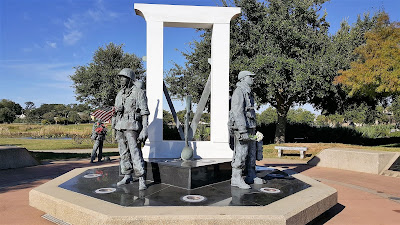 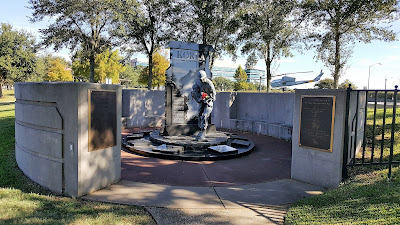 We also took a walk through the old historic section of Pensacola looking at some of the historical houses and finding two more caches (GC32CKK, GC33PMH). There was much to see here, but we just didn't have the time. Pensacola is just gonna be another one of those places to add to the growing list of places to visit again. 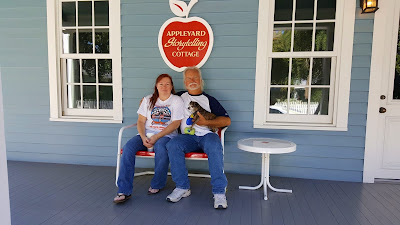 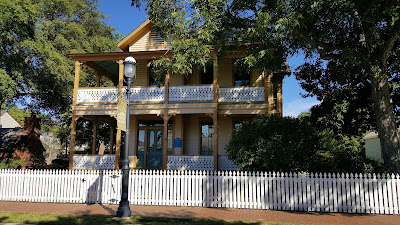 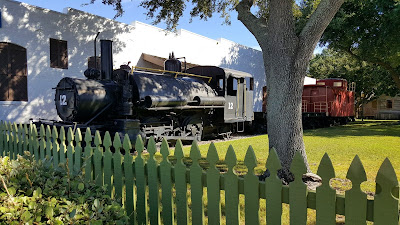 We made our way back to I-10 westbound, but quickly got off at the next exit for gas, a quick McDonald's breakfast, and just one more Geocache. I wasn't planning on another cache, but saw this one on the phone just down the road from the gas station and knew we had to go for it. As much as Candy's loves animals, we drove a few blocks south of I-10 to this HUGE Pet Cemetery (GC2GZ7Y). I've seen a few pet cemeteries, but this one was the biggest! 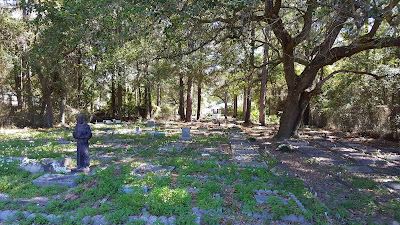 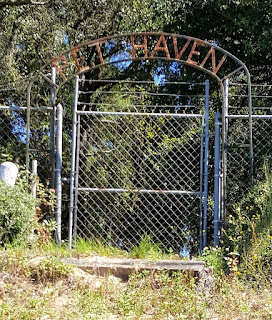 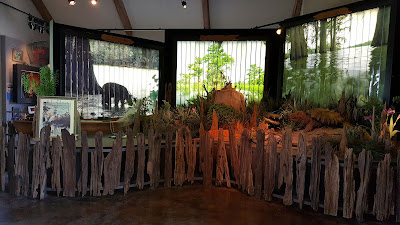 OK, back on I-10 westbound and we've got to make up time! We spent all day Sunday and still in Florida. Now it's almost noon Monday and we're STILL in Florida! Candy has to be at work Wednesday morning and we still have over 1,000 miles to drive! So through Alabama, Mississippi, and into Louisiana. About halfway across Louisiana and halfway across the Atchafalaya Basin Bridge in the middle of the swamp, it was time for a break!
Although we've passed through here and stopped a few times before, this was actually the first time that the welcome center was open. Inside the welcome center we were able to find the answers to the Earthcache located here (GC26BZM). We looked around at the exhibits inside and the statues out back. I was even checking out this boat out back, but couldn't get it to float.

While inside the welcome center, I noticed this other guy wondering around looking at the displays as well. Maybe another cacher? Couldn't tell. As we were in the car getting ready to leave, I now see him heading for the cache out towards the picnic tables. Yep, he's a Geocacher. Heading towards the exit of the parking lot, I then noticed a parked motorhome with an H3 Hummer attached to the back. On the tailgate of the hummer I noticed the Geocaching logo with JMCz by the tracking number. Now I've seen that name of log sheets all over West Texas. This cacher has over 100,000 finds! I just had to stop and say hello. So I parked the car again and walked over to where he was looking for the cache. We introduced ourselves and spoke for a few minutes. Then he headed east and we continued west. It's always fun to meet a cacher on the hunt and this was the first time meeting one with that many caches!

We drove late into the evening finally reaching Texas. I wanted to at least get through Houston, so we would not have to worry about morning rush hour traffic. Finally we found a hotel and settled in Brookshire, TX. From here it was just 500 more miles to get home!

A quick breakfast at McDonald's and headed down the road for a few miles until this interesting stop and Geocache (GC3C5JR). Once long ago there used to be a small zoo and petting farm. Now it is overgrown, falling apart, and appears to be surrounded by oil wells and storage tanks. But this towering piece of the entry gate remains with a large gorilla up top. 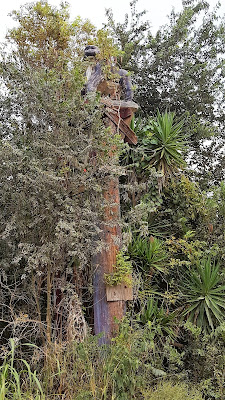 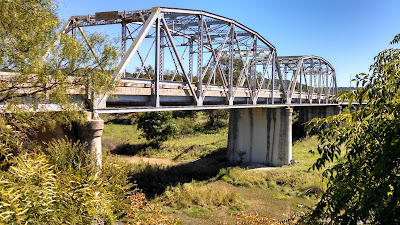 Now back on I-10 westbound. We did manage an early start today, so we had plenty of time to get home. We also wanted to grab some more caches on the way in order to pickup finds in ten new Texas counties. This time I just looked up the quick, simple, easy, usually boring park and grab caches just to save time. Most were right off the exit ramps so we could quickly get back on the Interstate and keep moving. The only one of interest was this cache (GC1M4Y2) which gave you a good view of this bridge. And then during a fuel stop, we passed by this rather large Texan where GeoDog Max began barking and growling. 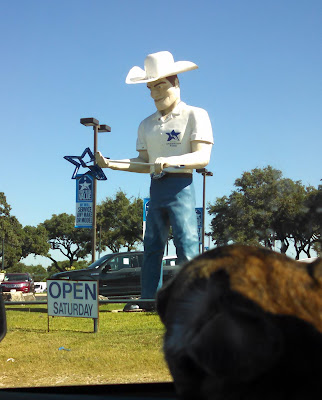 As soon as we got home, we ordered a pizza and crashed! It was so good to be home after such a crazy week dealing with the Hurricane. But we did get to see family and friends. And most of all, we got to express our love for each other saying our vows at our first Starbucks!
Posted by Mark at 1:58 PM