Hello again and welcome back to another day in our Geocaching Adventures. Today we're heading down to San Angelo for a Geocaching Event hosted by a cacher named mommio. Though it started with brunch, we didn't make it in time for that. We grabbed a few caches on the way and then cached around San Angelo before meeting up with everyone at dinner. But I'm getting ahead of myself.

Our first stop of course was the Starbucks in Odessa. Then on to Midland taking the TX158 exit east over to US-87 south towards San Angelo.

Our first Geocache was at the Water Valley Cemetery (GC13P18). The small community of Water Valley, TX dates back to the mid-1800's. The oldest marked graves date to the 1890's, though there are more than a dozen unknown grave sites. 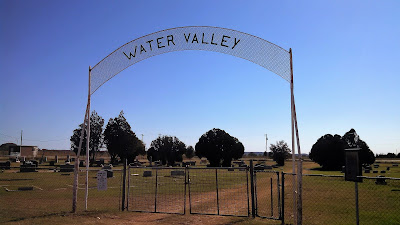 A few miles down the road there's a historical marker and our next cache (GC1XXZ6). In 1911, the Texas Legislature passed a law calling for the establishment of state institutions for the treatment of tuberculosis. Across the street from the historical marker was the first such establishment. Opening in 1912, the Anti-Tuberculosis Colony No. 1 began with facilities for 57 patients on a 330 acre tract of land. The tuberculosis nursing school was founded here in 1915, and by 1961 had graduated more than 500 nurses. It was renamed the State Sanatorium in 1919. Because of the advances in medicine, it eventually closed in 1971 after treating 50,000 adults and 5,000 children. 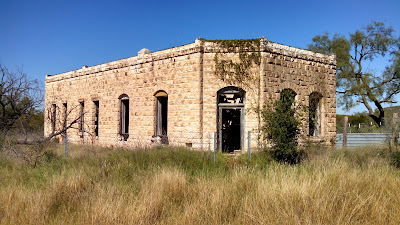 Not too far away is the small town of Carlsbad, TX. The town began in 1907 and soon began growing. But between a three year drought followed by the lengthy depression, the population declined. Our next Geocache (GC1XY0W) brought us to this old bank building, probably built in the early 1920's. It would be interesting to see this structure restored. The walls seemed pretty sound. The roof and interior have fallen apart. But to leave the look of the exterior, upgrade and modernize the interior and you'd have a cool looking house.

We finally made it to mommio's house and the other cachers have already scattered about town to do some local Geocaching. We found the rather LARGE geocache on the front porch (GC1F8K8) before moving on around town ourselves.

The next few caches were a couple of fun simple gadget caches. Pinball Wizard (GC217N6) was one that we've found several of before. Think like pulling the plunger on a pinball machine to get the ball (cache) to shoot out. That was followed by Puff the Magic Dragon (GC214PD) where you had to blow into a tube to get the cache to pop out the top. Three Blind Mice (GC6Q2Q5) was up next followed by Twist and Shout (GC33RDA).

From there we drove over to The Cowboy (GC4RW35). It was a statue honoring the hard working ranchers in West Texas. We never did find the cache. Turns out it was missing. 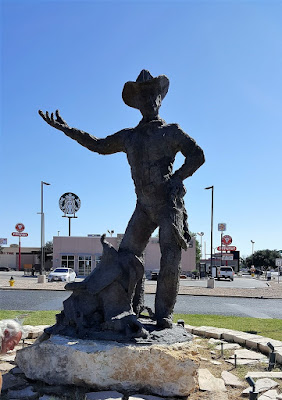 We also spotted these wonderful murals on the side of a building highlighting early public transportation in San Angelo.

I finally decided to go over to get the cache located at the San Angelo Visitors Bureau (GC101N0). I figured while there we could also find out some of the more interesting and historical places in town. There we picked up some information on the train depot and the old fort. Since the train depot was closest, we headed over there first. 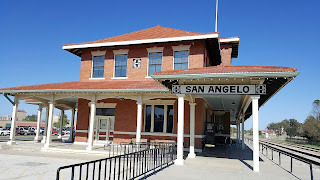 Train service first arrived in San Angelo in 1888 by the Gulf & Colorado Railroad, which was soon after purchased by the Santa Fe Railroad. But in 1900, the Kansas City, Mexico, & Orient Railroad also built a line through San Angelo. The depot here is the KCM&O depot built in 1910 and serves today as the Railroad Museum.
With the two competing railroads, San Angelo became the most important sheep, goat, and cattle shipping station in the country. The Santa Fe Railroad Company bought the KCM&O in 1928 after the oil boom. But in the 1950's passenger rail service began to dry up with the construction of new roads and highways. And on June 20, 1965, the last train departed from the depot. 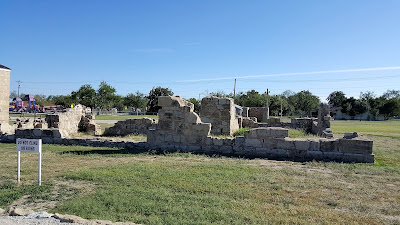 After touring the train depot and viewing all the displays, we drove over to Fort Concho. The center of a line of forts extending from the northeastern border of Texas to El Paso, Fort Concho was also the northern point of southern chain of forts extending to the Rio Grande. Established in 1867 (at the junction of the Butterfield Trail, Goodnight Trail, and the road to San Antonio) by 4th Calvary under Captain George G. Huntt to protect the frontier.

By March 1, 1870, the fort buildings were a commissary and quartermaster storehouse, hospital, five officers quarters, a magazine and two barracks; all built of sandstone. On June 20, 1889, the fort was abandoned and the property passed into private ownership.

We toured through all the restored buildings and looked at the displays. One of the officers quarters was even made into a telephone museum where they had just about every type of phone ever made! There were also two caches there, well supposed to be two caches there. We found one (GC46FQX) but not the other (GCKX8T). 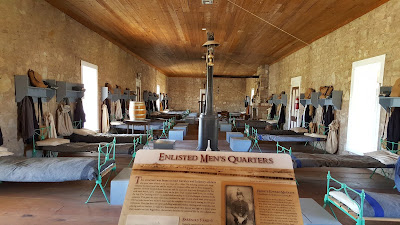 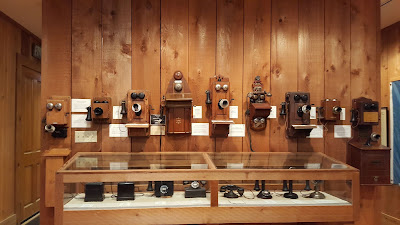 By now it was time to meet up with the group at the restaurant for dinner and talk of our Geocaching tales of the day. We had a good time meeting a lot of new cachers as well as seeing some familiar faces from other events.

There's a lot more to see around San Angelo, but as usual they'll have to wait another day. We just need to retire early! Until next time, see you back here or out on the caching trails.
Posted by Mark at 9:38 PM