Welcome back to Day 2 of my road trip from Florida back to West Texas. Today begins in Evergreen, Alabama. After a good nights rest at the hotel and a quick hotel breakfast, it was time to hit the road again. I'm still following the backroads of US-84, trying to stay off the interstates as much as possible. At the same time Geocaching and sightseeing along the way.

My first stop was to get gas and a Geocache (GC2APKW) at the Love's Travel Stop for Conecuh County, Alabama. A quick fuel up and find and I was on my way.

The next county over was Monroe County and also the next cache. The Geocache was by a historical marker for Fort Claiborne (GC178A3). Built by General Ferdinand L. Claiborne during the Creek Indian War of 1813-1814 as a base for his invasion of the Alibamo country with the U. S. Regulators, Lower Tombigbee Militia, and friendly Choctaws. Claiborne's campaign culminated in the American victory over the Creeks at the Holy Ground. I was hoping to see something other than the sign, but nothing of the fort remains.

Moving on to Clarke County and a quick roadside cache stop (GC2MYZ7) to claim a find and to continue making good time. 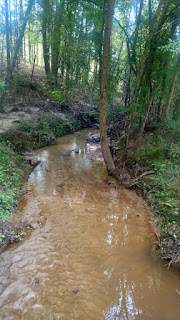 Choctaw County was the last along US-84 in Alabama and a county needed. I stopped at the Bladon Springs State Park for an Earthcache (GC3JAB8). The springs here, named after the original property owner, James Bladon, were first opened to the public as a therapeutic spa in 1838. Seven years later, state geologist and University of Alabama professor Richard T. Brumby and two colleagues from the University of Louisiana traveled to the springs to conduct a comprehensive analysis. Brumby reported his findings in a 27-page book, "An Analysis of the Bladon Springs," published in 1845. Following the report, the tourist trade increased so much that a resort was built, including a bowling alley, cabins, skating rink, and last but not least, a Georgian Revival hotel that could house 200. The resort is gone, but four springs remain, one of which is still covered by the gazebo from the resort days.

I gathered the information I needed for the earthcache and took a few pictures. There were two more caches in the park and I was tempted to take the short hike after them. But the road ahead was calling and I wanted to get some miles put behind me. So across the state line into Mississippi I went.

Wayne County was up first with a quick roadside cache (GC38PV9). After that was a quick Virtual Cache (GCE7A7) in Jones County. Continuing westbound on US-84, I skipped right through Covington County having already found a cache there. Then quick park and grab roadside caches in the remaining Mississippi counties of Jefferson Davis (GC388J0), Lawrence (GC1RNA2), Lincoln (GC35WGT), Franklin (GC35WGT), and Adams County (GCTV6P). 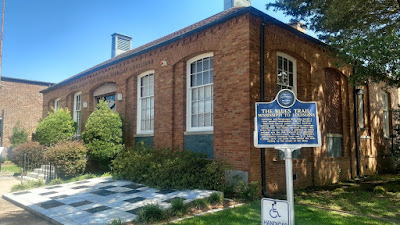 Crossing the state line into Louisiana, they have Parishes instead of counties. My first stop in Concordia Parish is the Delta Music Museum (GC1D5VZ) along the Blues Trail. Louisiana and Mississippi have long shared a close musical relationship. One of the most important musical paths was that between Natchez, MS and Ferriday, LA, where African American entrepreneur Will Haney operated Haney's Big House for several decades. In addition to major national acts the club featured local musicians including Ferriday's Leon "Pee Wee" Whittaker and Natchez's Hezekiah Early and Y. Z. Ealey. A young Jerry Lee Lewis often visited the club, soaking up the sounds of the blues.

I had arrived to the museum just as it was closing up. She watched and we chatted as I searched for and found the Geocache. After signing the log, we went inside and she gave me a quick tour of the museum.

Two more quick caches in LaSalle Parish (GC23AXN) and Natchitoches Parish (GC4XHMC) before arriving in Sabine Parish and a cemetery cache (GC2D9MA). Fender Cemetery has over 300 interments dating back to 1851. One of the spookier graves is of this red brick tomb that seems to have been elevated a few inches. Kinda makes you think that the undead comes crawling out at night searching for innocent victims to carry back to the underworld. 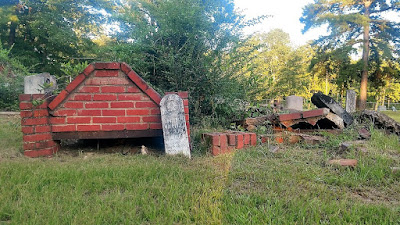 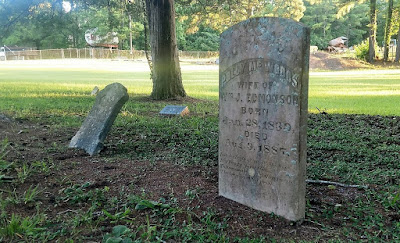 I crossed the Sabine River into Texas at sunset and got a spectacular view. Driving nearly 600 miles today, I've got around 450 miles to go. Can't wait to get home to see my Beautiful Sweet Wife! 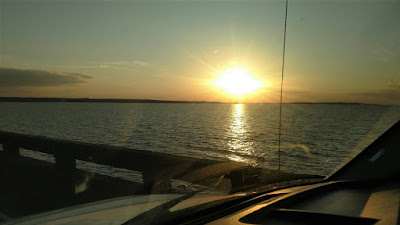