2017-07-06: Driving Back to West Texas Day 3: Geocaching Through Texas History and Cemeteries

Welcome back to my drive from Florida to West Texas on Day 3 and final leg of my journey. Today's ride should be about 450 miles, probably much more depending upon my Geocaching stops. On the agenda are some cemeteries, a ghost town, an old church, and some historical buildings. And some new caching counties of course!

This morning started out in Centerville, TX at Hwy 7 and I-45. Driving westbound on Hwy 7, it wasn't long before I made it to the next county and my first cache (GC3WT26) at the Wesley Chapel Cemetery. Here is where you'll find Tennessee native Isaac Phillip Stem who enlisted in Western Frontier service in that state in 1836. In October 1836, he moved to Texas and joined the Republic of Texas Army at Houston. Continuing to serve in the military, Stem was a participant in the Battle of Plum Creek on 8-12-1840, in present Caldwell County. The battle was fought between Texas soldiers and Comanche Indians, who had raided the coastal towns of Linnville and Victoria. Stem served in the Somervell Campaign of 1841 and was a member of a cavalry of mounted volunteers during the Mexican War.

After his discharge from the Texas troops in 1846, Stem joined the US Infantry at Corpus Christi, Texas and continued in the war with Mexico. Discharged at Monterey due to illness, he later returned to Tennessee and joined the Tennessee Volunteers at Memphis. He later transferred into the US Infantry once again. Isaac Phillip Stem and his wife, Lucy Ann Weaks, were the parents of eight children. The family moved to Robertson County in 1869 and Stem became a farmer and rancher. He died in 1893 and was buried here beside his wife. 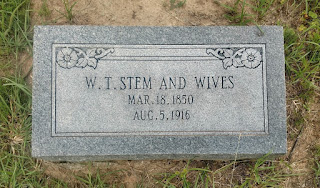 While Isaac played a part in the history of Texas, the interesting headstone was that of his son Washington Taylor (W.T.) Stem. The marker reads: "W. T. Stem and Wives." Doing some research all I could find was one website (werelate.org) that listed two wives. An Eliza Jane Henderson which he married in December 1873 and Catherine Johnson in February 1884. But the odd part is that there are no headstones around for either of them.

Here are a few more photos of Wesley Chapel Cemetery. There are 58 known interments here dating back to 1831. 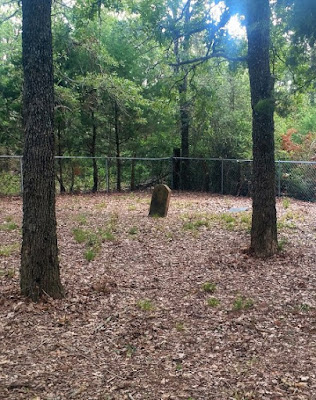 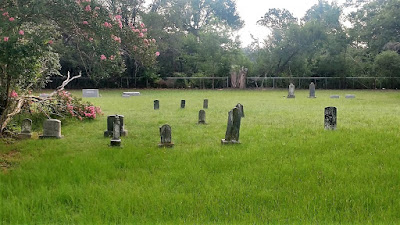 After a couple of miles through Robertson County, I then entered into a corner of Limestone County. It was an already found county so it wasn't on my list of geocaching counties. However passing by small cemetery with a historical marker, I just had to stop. And guess what there's also a cache here too! (GC112J1) 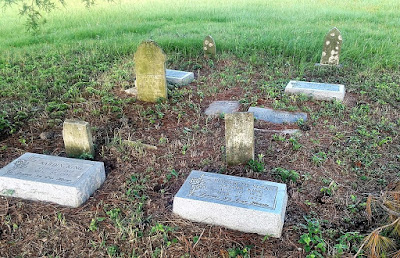 Bardin King (1819-1891) and Elizabeth Susan Salter (1822-1879) married in Lowndes County, Alabama in 1842. The following year, they traveled west by wagon with their young son William and Susan's parents and siblings, settling in Louisiana. Bardin was successful growing cotton, but in the late 1850s the extended family moved to Texas, settling first in Navarro and Washington counties before arriving in Limestone County in 1870.

The Kings bought 189 acres here from John and Lucinda Wilson, and the family raised cotton and grains, and were active in the Headsville community. Bardin King was a lay minister at Ebenezer Baptist Church (1 mi. S), and sons John, Cullen and Moses also served later in the same capacity, while youngest son Finley became an ordained Baptist minister. Bardin was a charter member of the local Masonic lodge and active in the Patrons of Husbandry, or Grange.

Susan King died in March 1879 and the family buried her here on the farm. The surrounding land became a dedicated cemetery in 1881, when Bardin divided his holdings among his nine living children and set aside one acre for a graveyard. Daughter Susan Leuticia married Robert Holden Williams, and they and their children later continued cotton and corn farming on the family land. Ten members of the King and Williams families were buried in what became known as King Williams Memorial Cemetery and then King-Williams Cemetery. Robert H. Williams died in 1944 and was the last to be buried in the graveyard, which features historic limestone headstones shaded by pine and cedar trees. Family tradition holds an African American freedman named Speight is also buried here in an unmarked grave. The families also added more modern headstones that are easier to read. 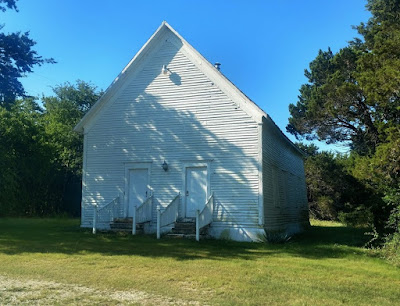 After skipping through the next two counties due to previous finds (remember my goal is to finally get home to see my beautiful wife, otherwise it would take weeks because I'd be stopping at every cache), I entered Coryell County. The Eagle Springs Baptist Church (GC2DM1W) congregation grew from an early Coryell County fellowship known as the Church of Onion Creek. Worshipers met in a log building until it burned in 1954. In 1958 this site was acquired for a new church building. In the same year, the Rev John McLain, a Baptist Missionary, organized the Eagle Springs Baptist Church from the earlier congregation.

By 1880 Eagle Springs was a thriving community with two grocery stores, two blacksmith shops, a cotton gin, two churches, two doctors offices, a post office, and a school. The congregation grew also, with many baptisms being held in the Leon River. 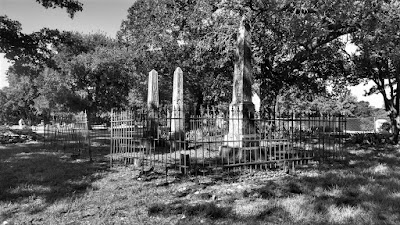 During the first decades of the of the twentieth century, families began moving away from Eagle Springs. The community school was closed in 1935, and in 1948 members of the Eagle Springs Baptist Church voted to disband. The church building was retained, however, for reunions and occasional services. It is one of the few remaining structures in the Eagle Springs community.


My next stop was a Virtual Geocache (GCB1BA). I can't say much as to give away the answers to claim a find. Currently used by the Chamber of Commerce, it once housed a cotton depot until the mid-1970's. 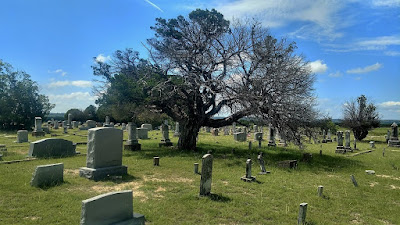 Upon reaching the town of Evant, I turned south on US-281 for a few miles in order to drop down into Lampasas County and grab a quick cache in the Pilgrims Rest Cemetery (GCVTQT). There are nearly 200 burials here dating back to the 1880's. Hard to pass up another cache and another cemetery, I continued a few more miles south to the Hines Chapel Cemetery (GCW0ZK) which also dates back to the 1880's. Making a u-turn back to the northside of US-84 into Hamilton County and two more caches at the Murphree Cemetery (GC22Z0Y, GC22Z10). 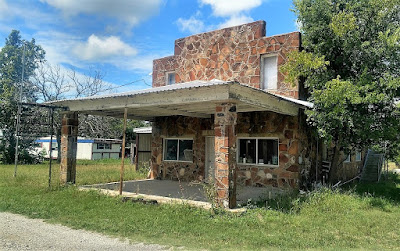 Finally back on US-84 heading westbound and crossing over into Mills County, I came to Star, TX and my next Geocache (GC17GNE). It was laid out by Alec Street in the mid-1880s and named for nearby Star Mountain. Calvin Skinner was the first postmaster when Star was granted a post office in 1886, and Alec Street ran a store and a gin. The town continued to grow until a tornado swept through in 1904. The storm leveled several houses and killed a couple of residents. Star had a school in its early days but did not build a permanent church until 1905, when the town reached the zenith of its prosperity. A bank, established in 1910, closed after a robbery in the 1920s. In 1944 Star had eight businesses and a population of 171. For years the cotton gin was the town's economic engine, but the gin shut down in 1950. The population in 1980 through 2000 was eighty-five. The cache was located next to this 1938 stone building converted to a history museum.

After a quick cache in Brown County (GC6XDMM), I entered into Coleman County. The Atchison, Topika, and Santa Fe Railroad established a railway line about eight miles southwest of Coleman in 1904. The town of Valera (GC17TC6) developed in the area around the train depot. It's business district, established parallel to the railroad, reflected the needs of its citizens. Businesses included a post office, a hotel, a bank, a flour mill, a cotton gin, an opera house, grocery stores, a blacksmith shop, a cafe, and a water well in the middle of the street. 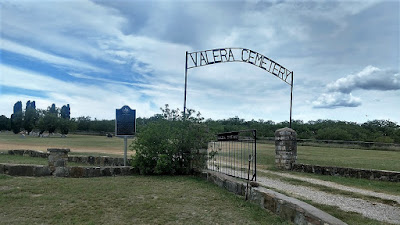 Recognizing the need for a community cemetery (GC15315), Mrs Minnie K. Harris deeded more than 5 acres of land in 1922. One of two cemeteries serving the community, it contains more than 400 marked graves, and at least 5 unmarked graves. The first recorded burial was that of Mrs N. C. Kidwell in 1922.


Next up was a virtual cache (GCD061) located in the next county over. In the town of Ballinger in Runnels County is the Carnegie Library Building. This native limestone library was built in 1909-11 with funds from New York industrialist and philanthropist Andrew Carnegie. Local banker Jo Wilmeth donated the land and the Rev J D Leslie, pastor of the First Presbyterian Church, served as the supervising architect. The buildings auditorium and club rooms were used for a variety of civic cultural events, school social activities, and temporary worship services of several local churches. 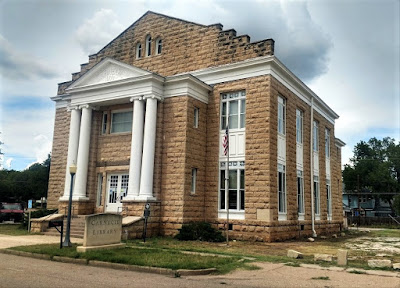 After one last and quick cemetery cache (GC6QTTJ) at the Fairfield Cemetery in Coke County, and it was non-stop all the way through to Monahans. It was so good to be back. I parked the U-Haul truck and went inside to see my beautiful wife. The truck can wait to be unloaded in the morning. That completes my long 3-day 1598 mile drive from Florida to West Texas.