Hello and welcome back to our Geocaching Adventures Blog. Today was kind of a lazy day. We did get out for some caching and enjoyed the beautiful weather, but stayed close to home in Killeen and Fort Hood, Texas. 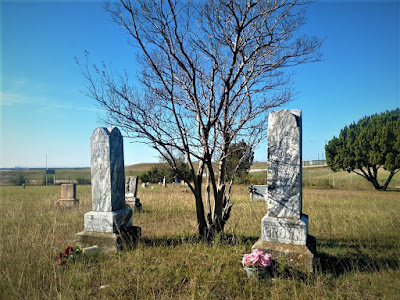 Our first stop was a small historic cemetery and ghost town next to the airport. From the historical marker: "Brown (Okay Community) Cemetery" Elisha Ivy, for whom Ivy Mountain Road was named, established a home and store in this vicinity in the 1860's. In the 1870's, a community known as Liberty Hill was developed northwest of his property. In 1896, when the rural settlement applied for a post office, it's name was changed to Okay. Area residents supported churches, a school, and businesses, and Samuel Marion and Mary Elizabeth (Evans) Brown set aside land for a community burial ground formally deeding it in 1907.

As military installations in the area grew, the community of Okay was displaced and ceased to exist in the 1940's. In 1953, the U.S. Government decided to extend the runway at Gray Air Force Base, where the Brown (Okay Community) Cemetery was located, approximately 1,600 feet southwest of this site. The Army Corps of Engineers moved 70 graves, 30 of which were unidentified individuals, to this location and aligned the burials similarly to original positions. The earliest marked grave dates to 1882 and is that of infant David Davis. Today the cemetery is a reminder of Okay Community and the families who lived there.

After looking around at the different headstones, I forgot all about the cache and left without finding it. Oh well. Just means we'll be back another day! 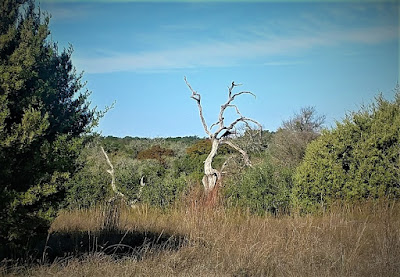 Have you ever found yourself driving down the road and spotting something out of the corner of your eye and you just start laughing? Well that happened on our way to the next cache! Driving down Maxdale Road on the way to the small community of Maxdale, we were passing through part of the Fort Hood Recreation Area. It's just a wooded area set aside for hiking and some off road trails. I think the army base may sometimes perform some training maneuvers there also. But as I was driving though I spotted what looked like an old dead tree doing some John Travolta disco dance moves! Oh I just had to make a u-turn and get a photo. While the picture doesn't quite come alive like the images I had going through my head, perhaps the tree has the Fever on Saturday Nights! Maybe this is what the large walking talking trees from the Lord of the Rings movie do when nobody is around. HaHaHa! 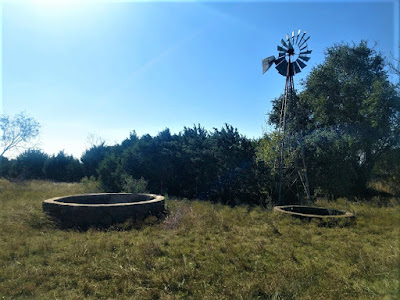 OK, enough of the dancing trees. A short ways further down the road and we arrive at Parrie Haynes Equestrian Center and our next two caches (GC4B0BF, GC4B0BN). The first was by the office. The host there noticed we had been looking for some time and came out to inquire if we were looking for that "Geo thing." I said yes and she pointed out where it usually is but said some kids were playing around there and it may have been moved. Well we expanded our search and eventually found it, returning it to where she had said.

The second cache was a short hike down a trail. There was a trail ride or some kind of horse event going on, so a lot of muggles riding horses everywhere. Most were off in the woods, but occasionally we encountered one or two riding along the dirt hiking trail. When we arrived at the cache location it was in the middle of some trees next to an old windmill and watering hole. 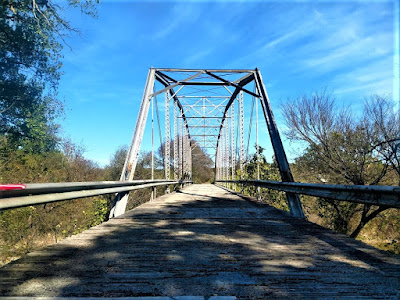 Arriving in the ghost town of Maxdale, Texas, we first stop at the old truss bridge built in 1914 (GCMFXE). Crossing the Lampasas River, it has been replaced by a more modern bridge a short distance away. This cool historic bridge is no longer open to cars. Just the brave pedestrians willing to venture out onto the wood planks, some of which are missing. But there is a geocache hidden out there so of course I'm going! Though it isn't that bad, so I would have gone anyway. As for the cache itself, it hadn't been found in five months. Two of the last four cachers having logged DNFs were experienced cachers too. Even those that did find it had posted about the container being damaged and a wet log. I spend about 20 minutes looking and came up empty. Since this was a historical place and a cool location, and the original hider was no longer active, I decided to go ahead and replace the cache with a new container. I happened to have a magnetic key holder which was perfect for this location. Some disagree with this practice and I'd wouldn't normally do this if there wasn't anything to see here. But I wanted to continue bringing other cachers to this location. 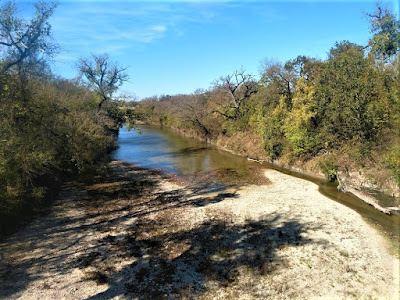 Crossing over the newer bridge, brought us into what's left of Maxdale, Texas. The area began settlements in the 1860's, it wasn't officially established with a post office until 1883. The town never really blossomed, reaching a maximum 50 residents in 1925. The post office closed in 1926 and the town slowly started declining. The population today is reported at only 4 residents.

Over at the Maxdale Cemetery is our last two geocaches, one traditional cache GC298G0 and one virtual cache GCG2EJ. From the historical marker: Established in the 1860's to serve the rural community of Pleasant Grove, this community is one of the oldest in Bell County. Land for the graveyard was given by Frank N. McBryde Sr, whose 1883 application for a post office for the community resulted in the name change to Maxdale. The earliest documented grave is that of Louisa Marlar (1849-1867), although an 1863 tombstone marks the site of a grave reinterred here from another location. Others interred here include pioneer settlers and veterans of the Civil War, World War I, World War II, and Korea.

The one headstone that caught my eye was this one belonging to: "Thorpe and Mosley, Killed in 1876 by John Carver." 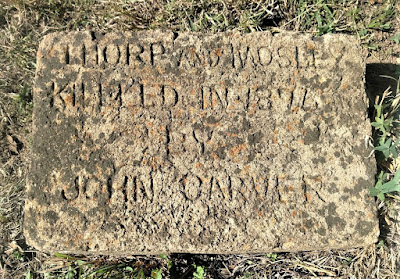 That was it for today. Like I said, not a big adventure but enjoyed the wonderful day and saw some interesting places. Until next time...
Posted by Mark at 4:15 PM