2017-11-24: A Quick Visit to the San Antonio Riverwalk, the Alamo, and the San Fernando Cathedral

Welcome back again to AwayWeGo's Adventure Blog. This week we had some relatives in visiting from Florida for Thanksgiving. So today we thought we'd take a drive down to San Antonio, Texas using the Riverwalk to burn off some of those calories we ate yesterday!

The earliest civilian colonists of San Antonio were a group of pioneers from the Canary Islands. They formed the first organized civil government in Texas and founded the village of San Fernando de Bexar in 1731. Following a sea and land voyage of over a year, these weary travelers arrived at the Presidio (Fort) of San Antonio early on March 9, 1731. Totaling 56 persons, they had emigrated to Texas from the Spanish Canary Islands near Africa, by order of King Philip V.

On July 2nd, they began to lay out a villa choosing a site on the west side of the Plaza de Las Yslas (present day Main Plaza) for the church and a site on the east side for the Casa Real (government building). On July 19, the Captain of the Presidio, Juan Antonio de Almazan, read to the islanders the decree of the viceroy naming them and their descendants "Hijos Dalgo" (Persons of Nobility).

Upon arriving late morning it was pretty busy as you can imagine being a holiday weekend. We found a parking spot a few blocks away from The Alamo. Before we got too far, I spent a few minutes on my phone studying Google maps to get a good sense of where I was so I could find the car again! 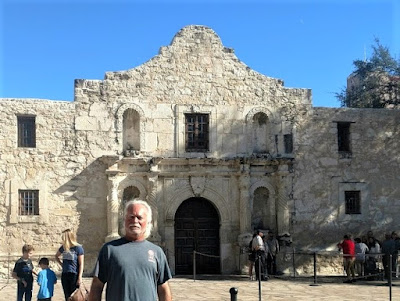 Our first stop and my only Geocache for the day was at The Alamo (GC7B6P3). And it was a virtual cache, so all I had to do to claim a find was take a photo of me with the Alamo in the background. Yeah, that's me. Most everyone has heard of the Alamo and that there was a battle there. But probably not much more than that. So, here's a history lesson.

Originally built in 1744, The Alamo Mission in San Antonio commonly called "The Alamo" is one of the early Spanish missions in Texas. Originally built to educate local American Indians after their conversion to Christianity. Later secularized in 1793, then abandoned. Around 10 years later it became a fortress and home to the Second Flying Company of San Carlos de Parras military unit. It's believed they are the ones who named it "The Alamo".

In December of 1835, Mexican General Martin Perfecto de Cos surrendered The Alamo to the Texican Army following the Siege of Bexar. A small number of Texicans held the fort but were eventually "removed" on March 6, 1836. The Battle of the Alamo lasted 13 days from February 23 to March 6, 1836. Many of the buildings surrounding the fortress were torn down in the years to follow. William B Travis and James Bowie shared command of The Alamo during the siege. Over the next five years The Alamo was used to garrison soldiers for Mexican and Texican armies but was eventually abandoned. 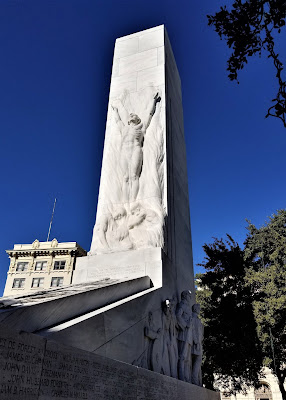 After Texas joined the United States the US Army began renting the facility to use as a quartermaster's depot in 1849. Once the nearby Fort Sam Houston was established in 1876 the army left The Alamo. The chapel was sold to the State of Texas which began to conduct tours but did not begin to restore it. Other buildings were sold off to a mercantile company which operated them as a wholesale grocery store. In 1895 restoration projects began under the newly formed "The Daughter of the Republic of Texas". In 1905 the DRT convinced the state legislature to purchase the remaining buildings and to name them the permanent custodians of the site. They were the custodians of the site until 2015 when Texas Land Commissioner George P Bush officially removed control of the Alamo to the Texas General Land Office.

The big controversy of today is the relocating of the Alamo Cenotaph monument pictured here. The city wants to redesign Alamo Plaza to accommodate the huge number of tourists it receives annually. The 60-foot tall monument built to recognize the 100th anniversary of the battle currently sits out in front of the historic mission. The redesign plan is for it to be moved 500 feet to the south, repaired, and correct some errors with the names. Also, the streets will be closed off giving more room for a courtyard representing a more historical configuration. A lot of people are not too happy about the plan though.

Whatever happens, all I know is this is the second time here at the Alamo and I still have yet to go inside due to the LONG lines of tourists! Maybe next time...

We continued along the Riverwalk enjoying the sights, sounds, and the smell of the many restaurants along the way.  Some of the areas were blocked off as they were in setup mode along the route with chairs and such. Seems as though there was going to be Christmas Parade on the river later that evening. 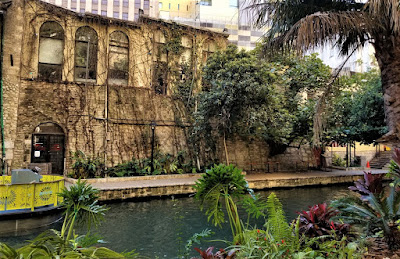 While the entire Riverwalk area ventures further off in different areas, it is a river of course, the main downtown section forms an east-west rectangle. The Alamo is on the northeast corner. On the west side is the San Fernando Cathedral. The site for the Church of San Fernando was selected on July 2, 1731, when Juan Antonio Pérez de Almazán, captain of the Presidio of San Antonio, laid out a central square for the villa of San Fernando de Béxar, as San Antonio was then called. He followed the instructions by the Spanish government for the newly arrived Canary Islanders. The church was to be located on the west side of the square, which may still be considered the center of San Antonio. Before and during the construction of the town's parish church, the fifty-five immigrants and the presidial families attended services at the presidial chapel or at San Antonio de Valero Mission. 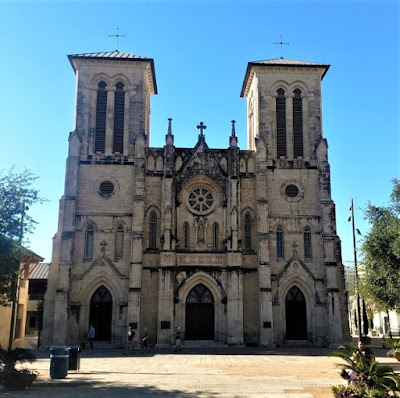 Although information is contradictory, the cornerstone for the first attempt to build a stone church was laid most likely on May 11, 1738. In 1748 the viceroy approved a donation of 12,000 pesos to complete the church. With funds secured, two artisans from San Luis Potosí, Gerónimo de Ibarra (a master stonemason) and Felipe de Santiago (a stonecutter), were hired to continue the project. Ibarra razed the earlier construction and enlarged the dimensions of the building. He completed the church in 1755. Joining Old World and New World saints, the congregation chose Our Lady of Candlemas and Nuestra Señora de Guadalupe as patrons in addition to the town's official patron, San Fernando, or King Fernando III of Spain, who was canonized in 1671. By the end of the eighteenth century the parish served by the church had grown considerably, to a population of over 1,000. The church acquired vessels, mission records, and parishioners after the nearby San Antonio de Valero Mission was secularized in 1793 and the four downriver missions in 1824.

The church suffered setbacks in the early nineteenth century, however; it was damaged by a flood in 1819 and a fire in 1828. Significant rebuilding was carried out in 1829–30, and the church continued to serve as an important religious and social center. In 1831 James Bowie married Ursula de Veramendi there. Several times during the Texas Revolution the church served secular purposes. Mexican cannons stood on its roof during the siege of Bexar. After that battle the Texans flew a flag of victory from it. Antonio López de Santa Anna not only used the church as a lookout but ordered a red flag flown there to signal that the Texans at the Alamo would be shown no mercy. In 1889 Juan N. Seguín said the Alamo heroes were buried there, but they are almost certainly not. 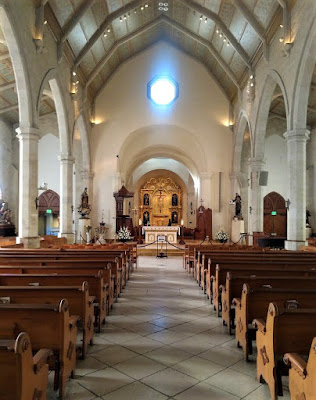 Caught in tumult, by 1840 the church of San Fernando had fallen into a terrible state of disrepair. One observer noted that half of its roof was gone and that swallows and bats flew about inside. Essential repairs were carried out by the new church administration that took over that year. Extensive renovation was planned in 1851 but not begun until 1868. Under the direction of architect François P. Giraud, the original bell tower and part of the nave were razed. Giraud's new design included a Gothic Revival nave, triple entrance portals, a gable roof, and twin bell towers and buttresses. In 1872 the original dome fell. By 1873 the old dirt floor and most of the limestone rubble walls mortared with goat milk were gone. Although the second bell tower was not completed until 1902, the new church was consecrated in October 1873. With the formation of the Diocese of San Antonio in 1874, the church was designated a cathedral.

The cathedral underwent another major restoration in the mid-1970s. Repairs were also made in preparation for Pope John Paul II's visit of September 13, 1987. The cathedral is a large and busy parish church and episcopal see, where about 400 baptisms, seventy funerals, and sixty marriages are performed annually. Many services are in Spanish. In 1993 Archbishop Patrick F. Flores was pastor of San Fernando. 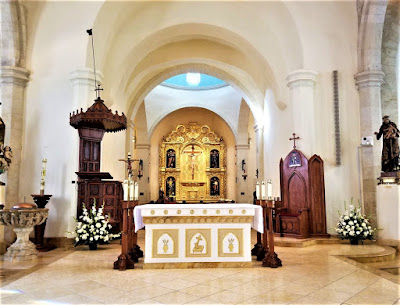 Just inside and to the left of the cathedral entrance, is a marble sarcophagus and plaque with these words: "Here lie the remains of Travis, Crockett, Bowie, and other Alamo Heroes. The Archdiocese of San Antonio erected this memorial May 11 A. D. 1938. R.I.P. Formally buried in the sanctuary of the old San Fernando Church. Exhumed July 28, 1936, exposed to public view for a year, entombed May 11, 1938. 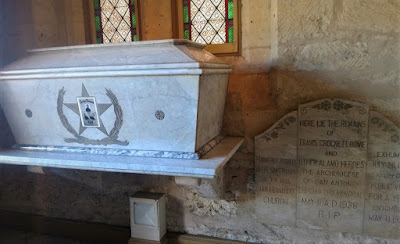 Still a mystery nearly 200 years later, as to if these are indeed the remains of those Texas Heroes. After the fall of the Alamo in 1836, Antonio Lopez de Santa Anna ordered that the bodies of the Texans be burned in outdoor crematories. So there were three separate funeral pyres for somewhere between 189 and 250 Alamo Defenders. The bodies were layered between, cut wood, tree branches and kindling, in 10 feet by 70 feet stacks, and set on fire. Texas leader Juan Seguin took ashes from two of the pyres, put them in urns and buried them under the old cathedral floor.

Finishing our loop around the Riverwalk, some of the younger of the group who weren't all that interested in the historic aspects of San Antonio got to be getting a little cranky. So we made our way back to the car and started the long drive back home. So that was our day around San Antonio. I hope to come back soon as there is much more to see. 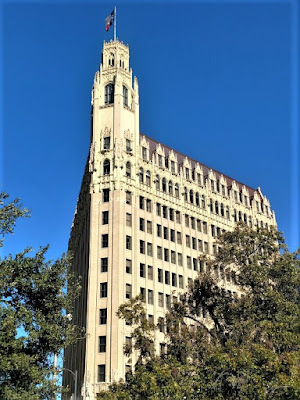 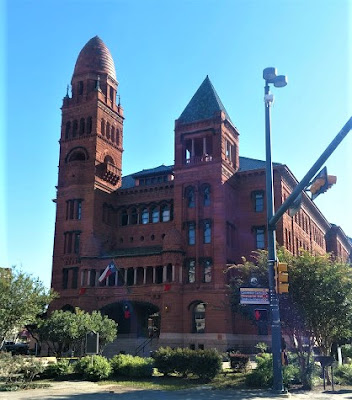