Hello again and thank you for joining us at our Away We Go Geocaching Blog! For today we stuck to one area. We had drove down from Killeen, Texas about 30 miles south to have lunch at our favorite Greek restaurant in Georgetown called Plaka Greek Cafe. If you're ever in the area, you gotta give it a try! Delicious Greek Food Fast! 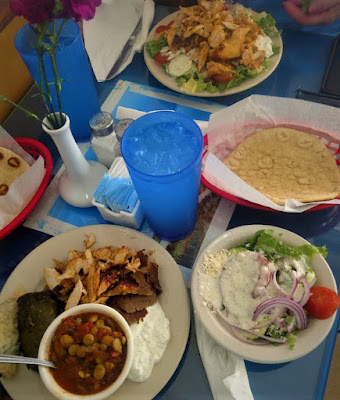 After lunch we decided to take a short drive down to Round Rock, Texas to grab a couple of virtual geocaches and tour some history. Permanent settlement began in this area in the late 1830s. By 1848, former Austin Mayor Jacob Harrell moved here, selling town lots near the Stagecoach Road crossing at Brushy Creek. A post office named “Brushy Creek” opened in 1851 in Thomas Oatts’ store. Three years later, the name changed to “Round Rock” for a distinctive limestone formation marking a natural ford for wagons. The Round Rock is our first virtual geocache (GCA219) for the day. 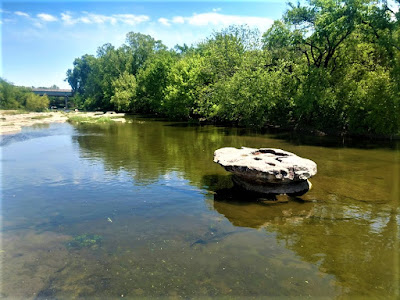 With immigration from several states and Sweden, the population doubled during the 1850's, bringing new stores, churches, fraternal lodges and grain mills. The first institution of higher learning, Round Rock Academy, began in 1862. After the Civil War, the former trail and stage road became a prominent cattle drive route. In 1876, the International-Great Northern Railroad developed a new townsite east of the existing Round Rock. A commercial district sprang up along Georgetown Avenue (Main Street) with construction of many limestone buildings. “New Town” quickly eclipsed the established settlement, whose postal name changed again to “Old Round Rock.” For months, the new site was the railroad terminus, bringing lumber and flour mills, cotton gins, blacksmith and wagon shops, banks, hotels, restaurants, stores and schools. Round Rock challenged the state capital for economic control of central Texas, boasting six hotels to Austin’s five and serving as the retail hub for several counties to the west. The railroad also made Round Rock a more cosmopolitan place, bringing new residents from all over the U.S. And all around the world.

Across the street from the rock is the Chisholm Trail Crossing Park. Throughout the park are several statues commemorating heritage. Also located in the park is a micro geocache called Pioneer Muggles (GC7G934) with a 4.5 out of 5 difficulty rating. We didn't have too much time to spend on it and only gave it about 10-15 minutes. So sometimes we have to pass on a cache and walk away with a DNF. This was one of those times. 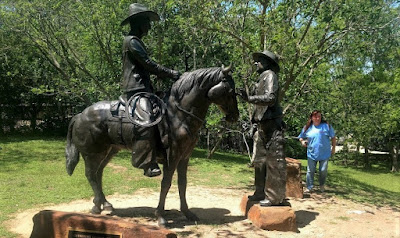 Well-positioned for growth by its location on major transportation routes, Round Rock became one of the nation’s fastest-growing cities by the late 20th century. Two dozen commercial buildings in Round Rock’s historic downtown were listed in the National Register of Historic Places in 1983.

A couple of blocks down the road is our next geocache called Travel Bug Motel 6 (GC42HG1). It had a lot of favorite points so we had to stop. A quick find and we're on our way to the next one.

Our last stop for the day was at the Round Rock Cemetery just down the road. One of the first things we noticed were all the blue bonnets blooming. The "complex" is actually three cemeteries in one: the Round Rock Cemetery, Hopewell Cemetery, and an old Slave Cemetery. There were two traditional (GC3Z43M, GC1B09G) and one virtual cache (GC91B5) in this cemetery complex. 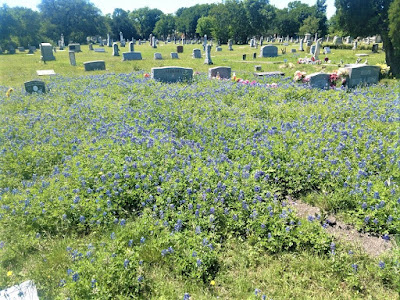 Walking through the cemetery, I noticed a couple of busted and crumbling crypts. Whenever I see these things I usually think "the zombies have escaped!" 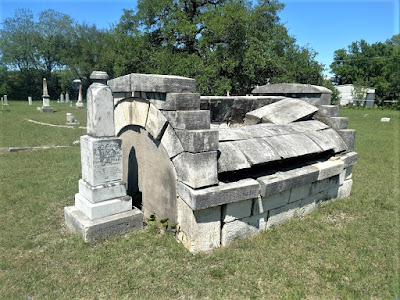 Probably the most famous resident here in Round Rock Cemetery is Samuel Bass. Born July 21, 1851 on a farm near Mitchell, Indiana, Sam was orphaned before he was thirteen and spent five years at the home of an uncle. In 1870, he arrived in Denton, Texas and worked for a while in a sheriff's office. In a few years he bought a little sorrel mare, became interested in horse racing, and had the fastest horse in Texas. One his fame spread, he couldn't get any bets against him to make any money.

So Sam helped drive a herd of stolen cattle to Nebraska where he stayed for nearly a year. Sam used his ill-gotten money to buy a saloon but he was soon restless. On a whim he sold the saloon and bought a gold mine that went broke almost immediately. He took up robbing stage coaches and fell in with some men with grander ambitions. On September 17, 1877, Sam and five others held up a Union Pacific train in Fort Bend, Nebraska. On board was $60,000 in newly minted $20 gold pieces plus $1300 in cash. Now $10,000 richer, Sam headed straight back to Texas.

Sam managed to make it back to adopted home of Denton, Texas boasting of a Black Hills gold strike to explain his sudden wealth. He spent lavishly on his friends and those who helped him hide out in the woods eluding the law. From his base near Dallas, Sam and his new gang held up two stagecoaches and robbed four trains within two months. He and the bandits were the object of a chase across North Texas by posses and a special company of Texas Rangers. Sam eluded his pursuers until his band rode into Round Rock, intending to rob a small bank. There on July 19, 1878, the gang became engaged in a gun battle with Texas Rangers led by Major John B. Jones. Wounded in the gun fight, Sam Bass was found lying helpless in a pasture north of town and died two days later on his 27th birthday. 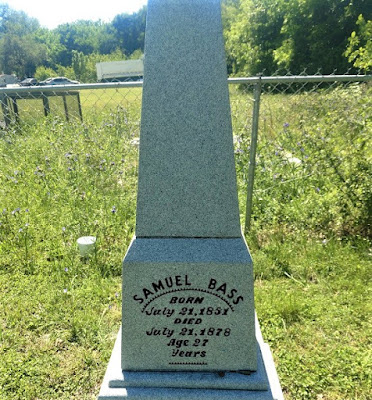 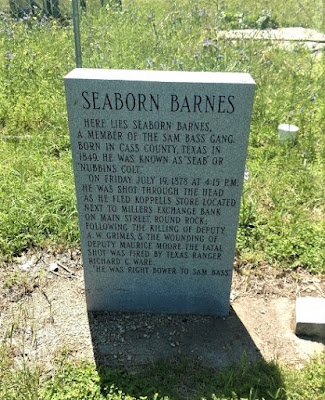 Historical marker: One-half acre of Old Round Rock Cemetery was set aside for slave burials. Enclosed by cedar posts and barbed wire, sites are marked head and foot by large limestone rocks. Some rocks are hand-grooved with names and dates. White graves here are dated as early as 1851. The first marked grave of a freed slave is dated 1880. Although there are 40-50 known burial sites of freedmen and the burial ground is still in use, no interments of former slaves occurred after the turn of the century. (1979) 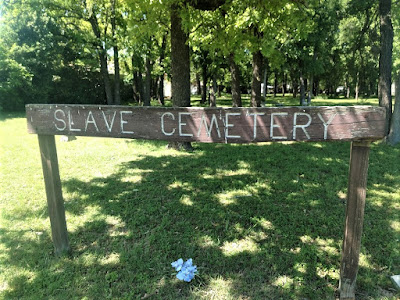 So that was it to our spontaneous little adventure to see some of Round Rock history. I hope you have enjoyed the stories and photos. Just a reminder to Like Us on Facebook or Follow Us on Twitter. See you next time!
Posted by Mark at 6:10 PM