2018-04-22: Geocaching Through a Cemetery, Ghost Towns, and an Old Bridge in West Texas

Here we go again, another Sunday and another 360+ miles of driving from Killeen in Central Texas to Monahans in West Texas. My wife lives and lives in Killeen and I work in West Texas as a Construction Surveyor building wind and solar farms. So after working 5 or 6 days every week, I drive eastbound on Friday or Saturday night. On Sunday's it's time to drive back westbound. That's also a time to find some geocaches along the way and do some exploring. So let's get started and find some smiles! 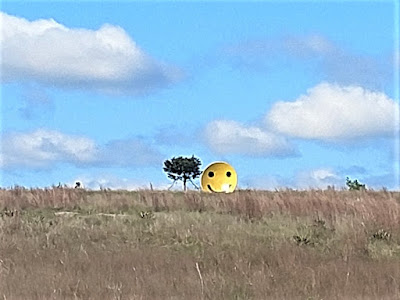 After a quick stop at Duncan Donuts for a caramel iced coffee and a bagel, I begin the journey. My first geocache is at the Garden on Memories Cemetery (GC480M4) on the south side of Killeen. Connected to the Calvary Baptist Church, this fairly new cemetery dates back to 1983 and only has just over 300 interments here. Being in a military community, there were a few military themed grave sites as well. 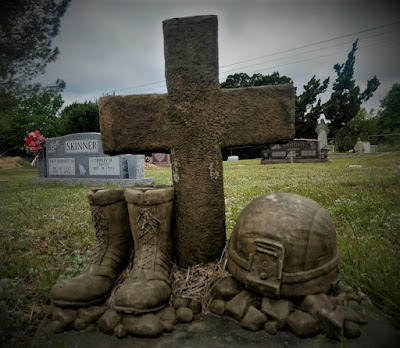 Passing through Lampasas every week, I see this old building. But I can't find any information on it online. Responses from the Backroads of Texas Facebook Group say it was definitely a church, but haven't gotten any dates or name of it. If any of you happen to know what it might be, please leave a comment. (Update: thanks to the great group over at "BackRoads of Texas", they have posted this link to a KCEN TV News report on the church which was built in the 1940's.) 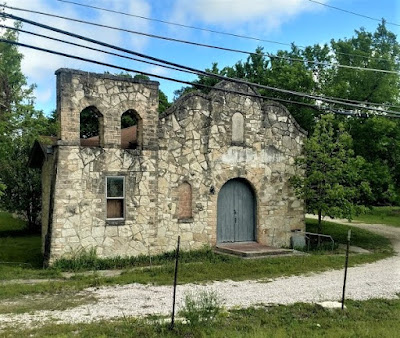 Continuing on my way westbound, I took Farm Road 580 instead of the usual US-190 out of Lampasas. Soon I arrive at my next geocache called "Double Smiley Cache" (GC10CCX). A quick roadside geocache that gives you one smiley for the find and one smiley photo opp waaaayy up on the hill. You can barely see it in this photo below, but I zoomed in close for the photo at the top of the page. Looks like it used to be one of those large old fashioned TV satellite dishes you used to see more often before the small ones commonly used now. 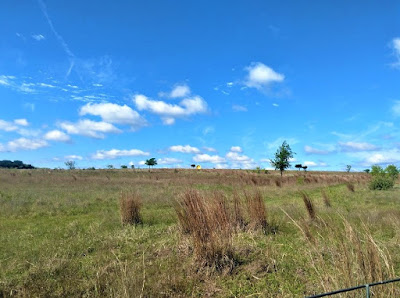 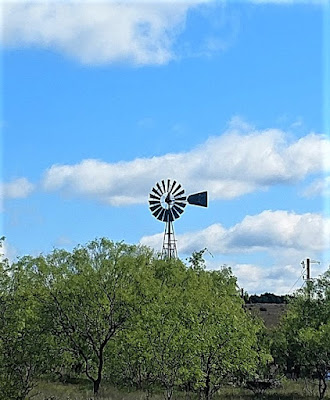 Continuing down Farm Road 580, I came to the community of Nix, Texas. I guess it could be considered a ghost town, but the population never really took off. From the historical marker: "Settlers came to this site along Fort Phantom Hill Road in the 1860's and established the Village of Nix. Harvey Wallace opened a general store in 1875, and his wife Elizabeth became the first postmaster. Several springs ran nearby, including Dripping Springs near the Nix Cemetery founded in 1878. By 1885, citizens started a school on the Levi Ringer Place. The town boasted a cotton gin, blacksmiths, and stores, and citizens built a new schoolhouse in 1920. Rock quarries and cedar yards begun in the 1940's supported the local economy. Nix schools absorbed Bend, Lynch Creek, Ogles before consolidating with Lampasas in 1952. The historic Nix Schoolhouse later became a community Center."

The highest population ever recorded was only at 27 in 1896. The post office was discontinued in 1906. The general store with gas pumps have been restored, though it does not function as a store and is located on private property. There are two geocaches in town. One called "Why Not #4" (GC15VTB) and the other called "Deliverance #14" (GC193Y4) located at the Nix Cemetery.


Leaving Nix, I make it back to US-190 for three more quick geocaches: "Our First of Many Firsts" (GC7G49E), "Flying Goose" (GC15VRP), and finally a backroad "Deliverance #7" (GC17NE8) which hadn't been found in two years! I almost passed it up because of that. But it was a very rural road and it didn't have any DNF's logged. That just told me that it was probably still there and nobody has made any attempts to find it. So always nice to find a lonely cache!

After finally making it to and passing through San Saba, I turned north on County Road 208 on my way to my next geocache. Then I saw this building with a historical marker and had to stop and investigate.

"A site once famous for its horses and racetrack. Riley Harkey (1832-1920) and Israel Harkey (1835-1914) were Indian scouts in Texas in 1850-53. In 1855 they led their parents, Mathias and Catherine Harkey, to move here from Arkansas with other adult sons, daughters, in-laws and grandchildren. The families ranched, and Mathias Harkey ran a country store for many years.

"Riley Harkey brought to Texas a fine, fleet footed mare, who with her racing progeny drew crowds of enthusiasts to this site for half a century. Other sons and grandsons of Mathias Harkey also joined in the breeding, training, and racing of horses. Stores, blacksmith shop, and other businesses all faced east on a single street overlooking the flat with its racetrack and baseball diamond. There was no post office, but the village was so well known that mail addressed to Harkeyville promptly arrived here. 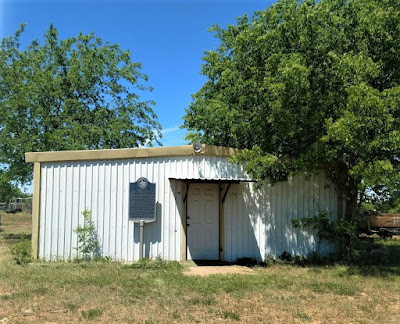 From Harkeyville to China! Well not exactly China but the China Creek Cemetery (GC3PC66). With over 700 interments here, this cemetery is still in use today. You'll find many of the Harkey family members buried here. There's also many members of the Ketchum family who were also some of the early settlers of San Saba County.

Green B Ketchum, Sr. relocated with his family to Sangamon County, Illinois from Alabama about 1825. The family then moved to Texas about 1848 with his father Peter Reasor Ketchum, a preacher and rancher, and two brothers and their families. Brother James arrived in Texas in 1846 and uncle Jacob earlier, fighting in the Texas War of Independence from Mexico.

The family went first to Limestone County, Texas for a short stay, then to Caldwell County, Texas where Peter Reasor Ketchum and some others remained, and Green Berry Ketchum moved on to San Saba County about 1855 where they were early pioneers of the County, settling on the San Saba River on the place known later as the Rainey place in China Creek Community. 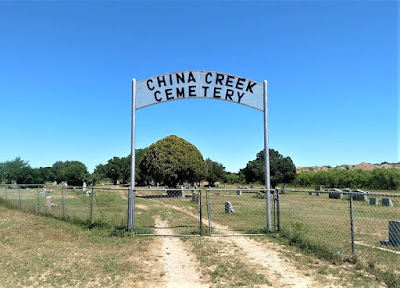 Now trying to make up time, I drive straight through San Angelo. After a while though and passing caches, it's time to make another stop. On US-87 nearing Sterling City, I turn down a side road for the Sherwood Lane Bridge geocache (GC14VW4). Built in 1920, this 96 foot pony-truss bridge crosses the North Concho River. A single lane bridge that still allows for vehicle traffic or you can use the lower water crossing off to the side. And if hunting for the geocache and you are having a hard time finding it, well somebody has made it obviously clear of its location. And if you still cannot find it, then I think you may need to find a new hobby! 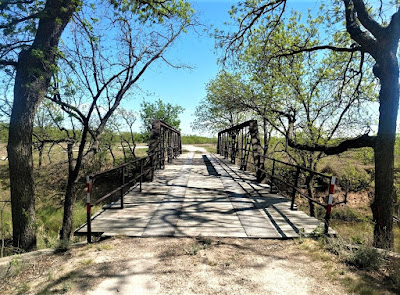 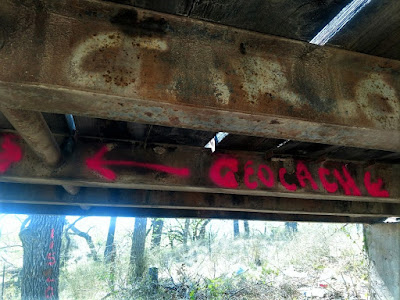 One more quick roadside geocache (GCXRZJ), then straight on towards Monahans. That's all for the day. Just a reminder to Like Us on Facebook or Follow Us on Twitter. Or just Subscribe to my blog directly using the buttons to the right. See you next week.
Posted by Mark at 4:40 PM