2018-05-05: Meeting Up With Friends From Florida To Go Geocaching and Exploring Waco Texas

Hello friends, adventurers, history lovers, and fellow geocachers! Welcome back to AwayWeGo's (that's us!) Geocaching Adventure Blog. I really appreciate all the likes and comments that we've been receiving on Facebook, Twitter, and here on this blog. Feel free to share our stories with your family and friends. Also, keep leaving your comments, suggestions, as well as a critique every now and then on how I can improve our blog.

OK, on to the fun stuff. I only worked 5 days this week so I arrived home in Killeen last night. That gave us a rare Saturday to go exploring together! WOHOO!! And doubly fun because we have a couple of our Florida geocaching friends staying nearby on their Spring/Summer RV tour. Well in reality, they're camping north of Dallas about 200 miles away. But for Texas that IS nearby! So we decided to meet up with the YankaBucs about halfway in Waco, Texas. 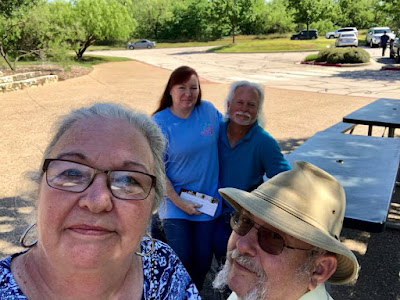 On the way to our rendezvous point, we passed by this old building. Since YankaBucs were a few minutes behind schedule, we decided to stop for a closer look and photos. A faded sign on the back side said "Water Works." Though it confused me about the train caboose coming out the side of the building. 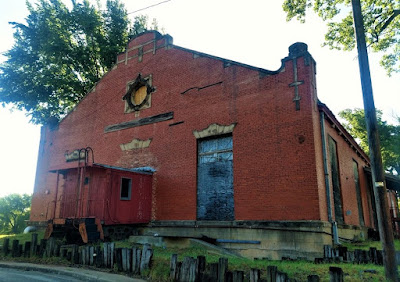 Further research from a 2015 Waco Tribune-Herald Article, this 7,000 square foot brick building was built before 1902 as a pump station for the private Bell Water Company. They punched wells into the adjacent sands for Brazos alluvium groundwater. Acquired by city of Waco in 1904, it continued as a pump station even after the Riverside treatment plant was built in the late 1910s. Contractor F.M. Young acquired the property for his headquarters in the mid-1950s, then leased it to Geoffrey Michaels from 1975 to 1989 as the popular Water Works restaurant. A variety of less successful restaurants and nightclubs followed until disorderly crowds forced closing in 2009. 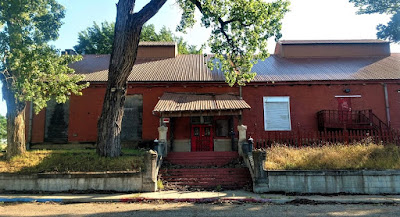 Continuing down the road a little ways, we met up with YankaBucs at the Waco Mammoth National Monument and our first geocache for the day. It was an Earthcache (GC5ZKCB). Waco Mammoth National Monument sits within 100 acres of wooded parkland along the Bosque River on the outskirts of town. Surrounded by oak, mesquite and cedar trees, the site offers an escape from the modern world and provides a glimpse into the lives and habitat of Columbian mammoths and other Ice Age animals. 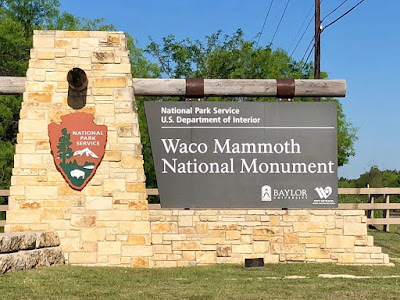 On a spring day in 1978, Paul Barron and Eddie Bufkin embarked on a search for arrowheads and fossils near the Bosque River. To their surprise, the men stumbled upon a large bone eroding out of a ravine. Recognizing the unusual nature of the find, they removed the bone and took it to Baylor University's Strecker Museum (predecessor to the Mayborn Museum Complex) for examination. Museum staff identified the find as a femur bone from a Columbian mammoth. This now extinct species lived during the Pleistocene Epoch (more commonly known as the Ice Age) and inhabited North America from southern Canada to as far south as Costa Rica.

Strecker Museum staff quickly organized a team of volunteers and excavation began at the site. Using hand tools such as brushes and bamboo scrapers, crews slowly excavated a lost world. Between 1978 and 1990, the fossil remains of 16 Columbian mammoths were discovered. Their efforts uncovered a nursery herd that appears to have died together in a single natural event. Between 1990 and 1997, six additional mammoths were excavated, including a large male. Crews also uncovered the remains of a Western camel, dwarf antelope, American alligator, giant tortoise, and the tooth of a juvenile saber-toothed cat, which was found next to an unidentified animal. 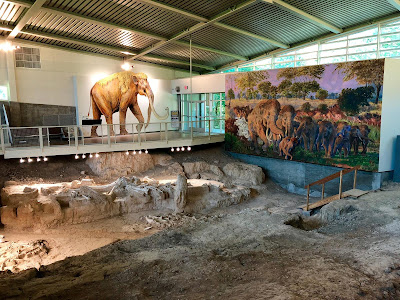 Getting back into Waco, our next stop was at the Texas Ranger Hall of Fame and Museum. First opening in 1968 on the banks of the Brazos River, a smaller museum preserved the history and heritage of the Texas Rangers. The newer Hall of Fame displays many artifacts, exhibits, artwork and documents relating to this legendary group of law enforcement officers of Texas and the old west. There was even a whole room dedicated to the "Lone Ranger" fictional character full of TV and movie memorabilia, which Mr YankaBucs really appreciated. 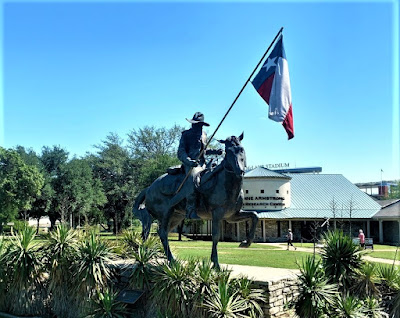 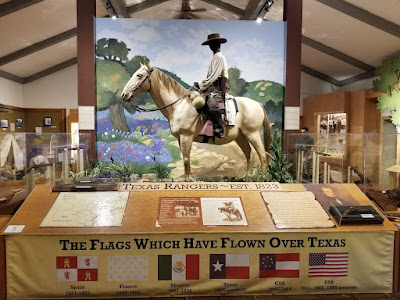 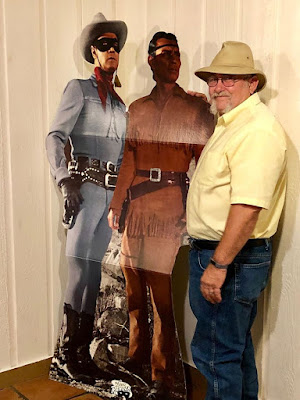 Next to the museum is the historic First Street Cemetery dating back to Waco's founding in the 1850's. First Street Cemetery is the oldest public cemetery in Waco and is composed of three distinct cemeteries: City Cemetery, Odd Fellows Cemetery and Masonic Cemetery. In 1852, City Cemetery and Masonic Cemetery were officially established. It is not known when Odd Fellows Cemetery was officially established, but it was acquired by the City of Waco in 1866.

Now it really gets interesting when you combine the cemetery, the museum, and the Fort Fisher Park in the same area. It was discovered during the Hall of Fame expansion during the 2007-2010, that there were human remains underneath. It turns out that during the creation of the Fort Fisher Park and first Ranger museum in the late 1960's, as well as a "relocation" of graves to the larger Oakwood Cemetery to the south years earlier, that ONLY headstones were moved and not the remains of the bodies buried underneath. As you can imagine, that caused a LOT of community outrage and delays during the renovation and expansion plans!

As a surveyor myself, I had to include a photo of the Major George B Wrath statue there. Perhaps they could have used him to relocate the cemetery. 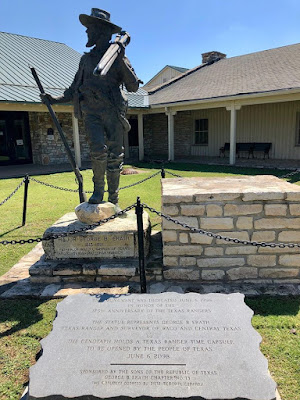 Now it is time for lunch. We saw this place across the highway also on the river called Buzzard Billy's. The decor and location were great and the food was excellent! However, I forgot to take any pictures. After filling up with a delicious lunch, we decided it was time for a walk along the river front to burn off some calories.

We crossed the Waco Suspension Bridge first. This was the Brazos River Crossing of the Chisholm Trail and a virtual geocache (GC2B5A). Imagine all the history that once crossed over this bridge. 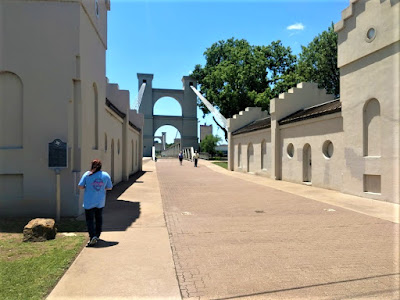 In 1866 the Waco Bridge Company was granted a 25 year charter to build a toll bridge here. The charter guaranteed that no other bridge or ferry could be built within five miles. Construction began in 1868 and, after much financial difficulty, was finished in 1870. Bridge traffic included wagons, pedestrians, and cattle herds. Special rates were given to heavy users. From 1875 to 1889 the public agitated for a free bridge, but the company retained its monopoly. Then, in 1889, the bridge was sold to McLennan County which gave it to the city of Waco as a free bridge. 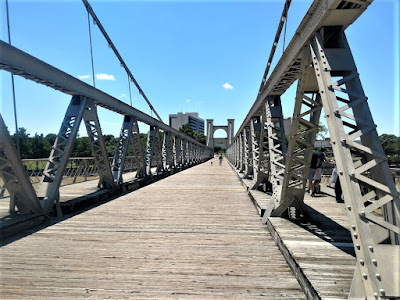 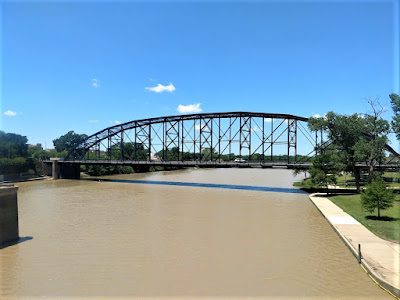 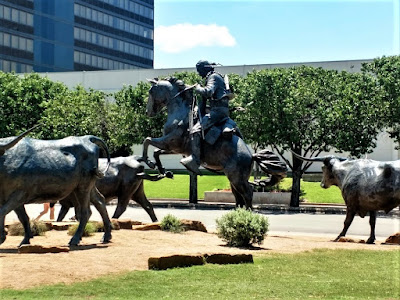 We continued strolling along the riverwalk finding various geocaches along the way and enjoying the day. (GC7ETPC, GC7ETQF, GC7ETQ9, GC7ETPY, GC6D2E, GC7C2NN, GC7C2N7) One of them had this monument. The inscription read: "Shakespeare! Daign to lend thy face, This romantic nook to grace, Where untaught Nature sports alone, Since thou and Nature are but one…1616-1916." 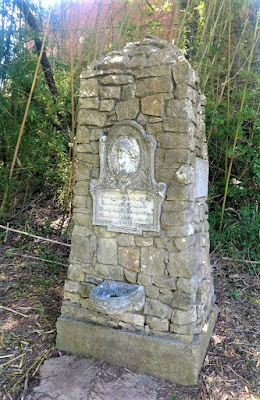 An easily overlooked memorial that pays tribute to William Shakespeare (1564-1616). How and why is it there? In 1916, on the 300th anniversary of his death, the Waco Shakespeare Club had it constructed and designed by Paul G. Silber, Sr. According to the Waco Shakespeare Club record’s at The Texas Collection, Baylor University, the organization began in the late 1890's at the Waco home of Kate Harrison Friend and her mother, Arimenta Harrison Friend, “conducting a private school guaranteeing their pupils thoroughness for higher grades.” Here, Kate Friend “…organized a class in the study of Shakespeare for the single young ladies of the elite of Waco. Here so much profit and enjoyment was experienced, that on request, a class for young matrons was formed.” Thus officially forming the club in 1899. 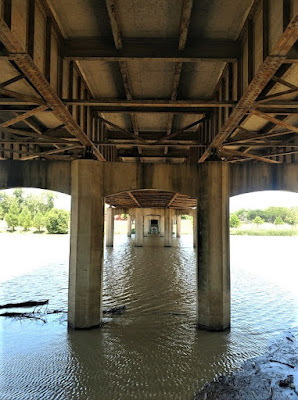 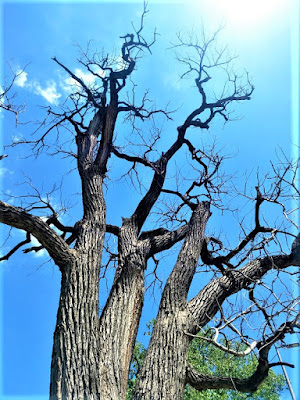 After making it around the riverwalk, we drove a few blocks over to the Dr Pepper Museum (GC2ATKV). Dr Pepper is a “native Texan,” originating at Morrison’s Old Corner Drug Store. It is the oldest of the major brand soft drinks in America. Like its flavor, the origin of Dr Pepper is out-of-the-ordinary. Charles Alderton, a young pharmacist working at Morrison’s store, is believed to be the inventor of the now famous drink. Alderton spent most of his time mixing up medicine for the people of Waco, but in his spare time he liked to serve carbonated drinks at the soda fountain. He liked the way the drug store smelled, with all of the fruit syrup flavor smells mixing together in the air. He decided to create a drink that tasted like that smell. He kept a journal, and after numerous experiments he finally hit upon a mixture of fruit syrups that he liked. 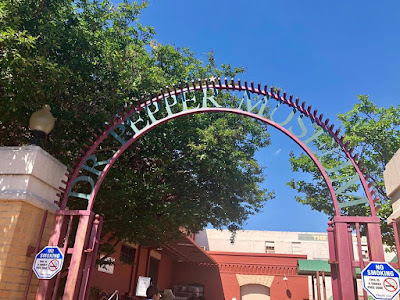 Dr Pepper gained such widespread consumer favor that other soda fountain operators in Waco began buying the syrup from Morrison and serving it. This soon presented a problem for Alderton and Morrison. They could no longer produce enough at their fountain to supply the demand. Robert S. Lazenby, a young beverage chemist, had also tasted the new drink and he, too, was impressed. Alderton, the inventor, was primarily interested in pharmacy work and had no designs on the drink. He suggested that Morrison and Lazenby develop it further. Morrison and Lazenby were impressed with the growth of Dr Pepper. In 1891, they formed a new firm, the Artesian Mfg. & Bottling Company, which later became Dr Pepper Company. Lazenby and his son-in-law, J.B. O’Hara moved the company from Waco to Dallas in 1923. 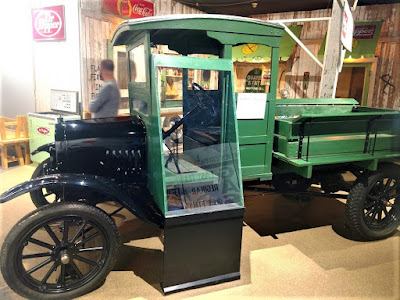 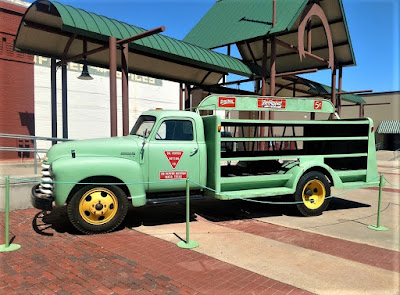 Around the corner from there was the Magnolia Market. Magnolia Market at the Silos, commonly called Magnolia Market, is a shopping complex that encompasses two city blocks in downtown Waco, Texas. It is marked by two 120’ high silos, built in 1950 as part of the Brazos Valley Cotton Oil Company. The grounds opened to the public in October, 2015.

The complex is owned by Chip and Joanna Gaines, TV personalities best known for HGTV's Fixer Upper TV series. The Silos, Waco, TX The grounds include a 12,000 sq. ft. retail store located in the historic grain barn and office building, a food truck park with picnic tables, a garden store, bakery, and lawn area. There was some kinda 5K event in the area today, so the place was just packed! This is the line below just for the bakery! 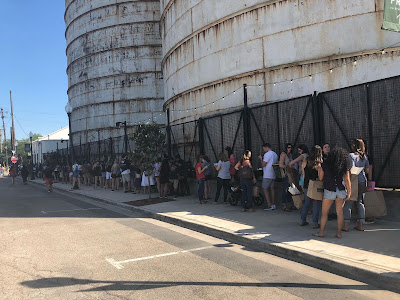 While the YankaBucs took a peak inside the Market, Candy and I stayed outside in the courtyard / lawn area because it was so crowded.

As we walked around the corner on our way to dinner, we passed by the First Baptist Church which I thought was worthy of a photo. 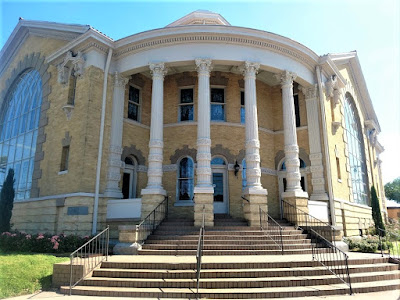 Then we arrived at Hecho En Waco Mexican Restaurant for another good meal. After an exhausting nut rewarding day, it was time to say our good-byes to our good friends the YankaBucs and head home. I hope you have enjoyed our tour of Waco, Texas. Until next time...
Posted by Mark at 7:53 AM