Hey welcome back to the AwayWeGo Geocaching Adventures Blog. If you remember from last week, at the end of the day my GeoPrius blew the engine. So throughout this past week, I contacted four Jeep dealerships to start working on a replacement geomobile.

The first and closest dealer was right there in Fort Stockton, Texas, Ram Country Fort Stockton. They actually had exactly what I was looking for! A new white 2018 Jeep Wrangler JK 4-door Rubicon, fully loaded with navigation, heated seats, trailer hitch, remote start, and much more. Sadly though the only thing the salesman was interested in was getting me down there for a test drive.

Hello! I don't need to test drive it. It's a Jeep Wrangler, it's gonna have a rough ride, a lot of wind noise, and bad gas mileage. "What's your BEST selling price?" Salesman: "I'm sure we can get you the best price possible. How soon can you come down to discuss putting you in your new Jeep?" That's all he would say. He wouldn't give me any numbers. I don't have the time nor do I want to sit there in your dealership for hours on end to negotiate a deal. So I gave them a bad review on Google.

Next I called the Jeep dealer in Odessa, All American Chrysler Jeep Dodge, and got a hold of a sales guy willing to work with me over the phone. They had one there with everything I wanted just like Fort Stockton except it was bright red. Now if I were buying another Corvette, that would be perfect. But every other vehicle I prefer to have in white. It was still tempting.

This guy was working hard for me though. He even called Fort Stockton to see if they could make the trade and then sell it to me, but they refused. There was also another Jeep he thought I would like that was a couple of years old. The couple that was wanting to trade it in also had a motorhome so the Jeep was already equipped with the tow brackets. But they couldn't take in the motorhome. So that couple ended up going back to the RV dealer who bought back the motorhome and the Jeep.

Even though I didn't buy a Jeep from them, I left them a good review anyway because they put in a good effort. They just didn't have the right inventory.

I also had a call into All American CJD in San Angelo. They had some possibilities but nothing really filling all the option requirements that I was looking for. So there too was an inventory problem.

Checking several other dealer websites as well but nobody had the right Jeep I was looking for.

Another call that I had made was to Freedom Jeep in Killeen, Texas. They had a 2018 Jeep Wrangler JK Sahara 2-door. I actually like the 2-doors better, but I knew the 4-door would be more practical. But this one had the navigation, XM radio, heated seats, the right colors and all. The only thing it didn't have already on it was the tow hitch.

And best of all they could work with me over the phone. Especially since I was over 300 miles away! We made an agreement on the price. But when it came to financing their interest rate was a bit high. They said they can work with outside sources, so I called my credit union back in Florida and got a rate less than half what the dealer quoted. After letting the dealer know, their finance manager called me back the next day and said they could do it for 0.2% higher than the credit union. I figured it was close enough and agreed to complete the transaction there to save time. By now it was Thursday and they would have to wait to release the Jeep until they received payment from my credit union.

After work Friday, I caught a ride home from a co-worker who also lives in Killeen.

This morning my wife dropped me off at Freedom Jeep and they had my Jeep parked right there by the showroom. They had all the paperwork ready to go. I could have signed the papers and been on my way in less than 30 minutes. But remember it didn't have the trailer hitch option from the factory. So after I arrived they immediately sent it into the shop as I went into the finance office. They got a GREAT review on Google from me!

Now I have my new GeoJeep II. Now I just got to get some Travel Bug decals made for it. 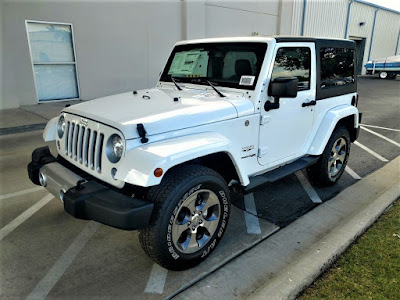 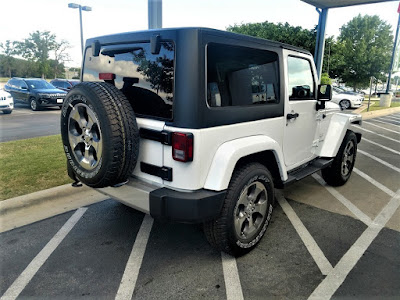 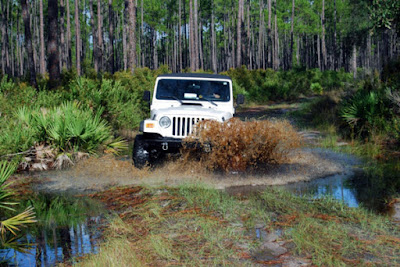 So if you're ever in the market to buy a new/used car, there's a couple of things to remember as a buyer:

1) Research! Know what kind of car you want BEFORE you talk to the dealer. If you want a test drive, rent the car you're thinking about. You'll get a better idea if you like it or not versus driving it around the block.

2) Shop Online! Don't be constrained to the dealer nearest you. If you can get a better deal from a dealer over in the next town wouldn't it be worth it to take a longer drive? And don't worry about letting them know you're shopping around for the best deal.

3) Probably the most important thing of all: shop with your brain and NOT with your emotion! That's why the salesman want you there to drive, feel, and smell the car. They want you to fall in love with it and make it an emotional purchase. Then they have you hooked. But if you buy with your brain, you have the upper hand. And you have to be willing to walk away from the deal. Remember they want to sell you that vehicle. Work out the numbers and come up with an agreement before you even get there and you won't be wasting a whole day and into the night going back and forth.

Now to go places the GeoPrius couldn't get to!
Posted by Mark at 6:16 PM