WOW! What a day! It was going good for the most part. But ended with a huge bang. Today's Geocaching Adventure was a 360+ mile drive from Killeen to Fort Stockton, Texas. So let's get started...

Just south of Killeen is a little town called Ding Dong. Now before your mind goes too far off the deep end, let me tell you the story as provided by the TexasEscapes.com website. Ding Dong is in Bell County but that's how it originated. Ding Dong was named for a Bell all right, but not Peter Hansborough Bell, the third governor of Texas and the man for whom Bell County is named.

According to historical accounts, the Bells in question were Zulis Bell and his nephew Bert Bell. In the early 1930's the two Bells bought and ran a country store on the Lampasas River about midway between Killeen and Florence, at a place then known as McBryde Crossing. The Bells hired a talented sign painter by the name of C.C. Hoover to paint the sign for their new store. It was suggested to Hoover: "Why don't you do something original with this sign. How about drawing two Bells with the name Zulis in one and Bert in the other. Then print 'Ding Dong' on the sign." After a while the little community around the store took on the name of Ding Dong.

Now I mentioned McBryde Crossing which brings me to my first geocache of the day. Mancel T. McBryde (1821-1896), who brought his family here from Georgia in the early 1860's, began this family cemetery (GC480KN) in 1885 upon the death of his wife, Jane W. Goar McBryde (1826-1885). A farmer and rancher, McBryde selected a site south of his family's home on which to bury his wife. The McBryde's had eight children, four of whom married into the Hoover family. McBryde and Hoover descendants are also interred here. The oldest McBryde family graves are enclosed in stone. 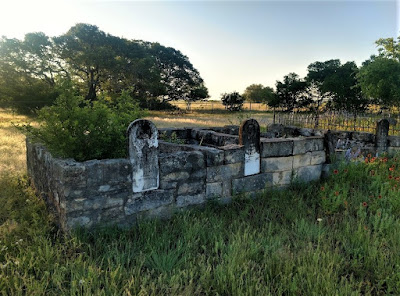 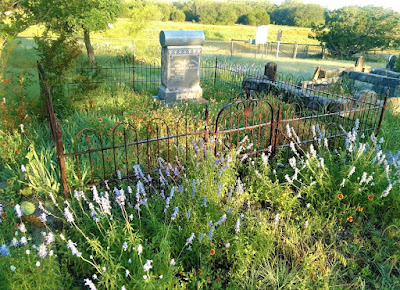 A few hundred feet to the south is a tree lined dirt road which led to my next geocache and cemetery. ​Emily LeSeur Haynes Sharp (1824-1880) came to Texas from Alabama with her first husband, William Glenn Haynes. They settled in Harrison County, where they owned a large amount of land and operated a cotton gin. William Haynes died in 1849, and three years later Emily married Augustus V. Sharp (1810-1868). 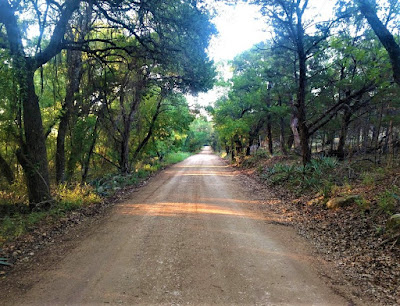 The Sharp family moved to this area in 1859 and settled along the Lampasas River. When their six-year-old daughter, Sarah, died in 1864, she was buried on the family farm. Four years later Augustus Sharp died and was laid to rest next to his daughter. In 1879 Emily Sharp deeded three acres of land surrounding the graves to establish a community cemetery (GC68YMO). 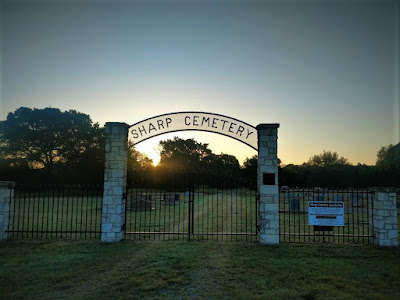 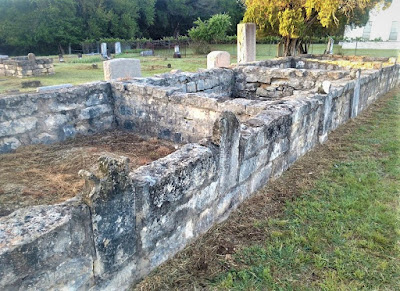 The. G. W. Dockery family deeded another 1.9 acres for the Rock Creek Church of Christ which was established in 1882, and in 1905 the members built a sanctuary. Among the interments in the Sharp Cemetery are those of Sharp, Haynes, and Dockery Family members; veterans of several wars; and a number of infants and small children, many of the earliest graves are marked only with field stones, and some are surrounded by 19th-century rock fences. 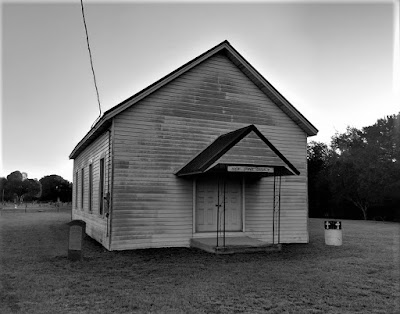 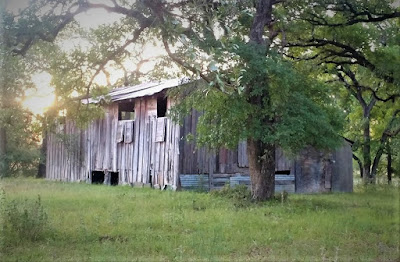 Driving westbound on Highway 29, I was passing through the community of Mahomet and spotted a cemetery sign. I didn't see a geocache listed here but I had to go check it out anyway. The Mahomet Cemetery, with interments dating back to the 1850's, became a community graveyard for the Sycamore Springs and Mahomet rural communities. In 1909 J. W. Williams and J. W. and Nellie Greer deeded the cemetery property to the community of Mahomet. Among the hundreds of people buried here are many of the area's pioneer settlers and their descendants and veterans of wars ranging from the Mexican War (1846-1848) to the Vietnam War. Mahomet Cemetery remains active and is maintained by an association of descendants of people buried here. 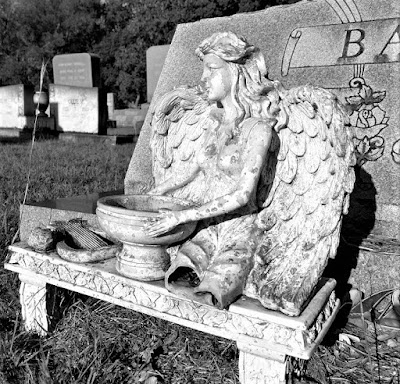 Since there wasn't a geocache already hidden here, I decided to place one there myself. Checking out the headstones, I spotted a William Williams (1833-1884). With a name like that I had to hide the geocache near him (GC7PA3G).

A couple hundred feet down from the entrance to the cemetery is the Mount Horeb Lodge. Chartered January 21, 1854, they first met in a log schoolhouse. They erected their own lodge hall in 1856 on land given by Grand Master Sam Mather and B.K. Stewart. The first floor was used as a church and school. A fire in 1915 razed the hall. The lodge was rebuilt here in 1916 on land given by G.T. and W.J. Williams. 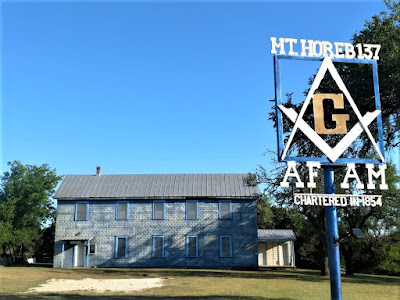 On the west side of Burnet, I came to the Post Mountain Cemetery (GC4EKFV). Burnet, Texas is known as the Bluebonnet Capital of Texas. Burnet was founded next to Fort Croghan in 1852, when Burnet County was established. The town was originally named Hamilton after John Hamilton, who owned a league and labor of land in the area. In August 1852 a post office named Burnet was established in Hamilton, and then In 1858 the name of the town was changed to Burnet.

Post Mountain Cemetery is the largest of four cemeteries maintained by the city. There are over 1200 interments here. Of the photos I took, this is the one that I found most interesting. The tall obelisk leaning against it's base. 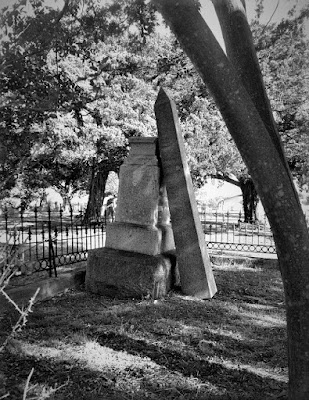 Before you get to Mason, there's a little town called Art, Texas. Even though it's population is less than two dozen, I don't think it's considered a ghost town as it has never reached 50 people. Though being that small there are still three cemeteries, but only one geocache. (GC1NVFV) 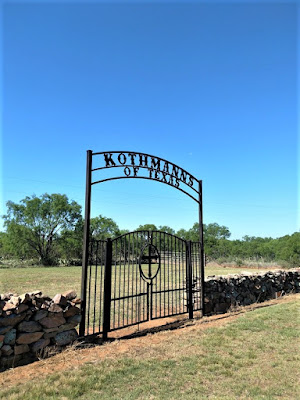 Heinrich Conrad Kothmann (1798-1881) and his wife Ilse Katherine Pahlmann (1810-1905) and their family sailed from Germany to Indianola, Texas in 1845. Among the first families to settle in Fredericksburg, the Kothmanns were issued a 640-acre land grant in Mason County in 1848. In 1856 they moved to Art and were among the first immigrant families in this area. A trained cabinetmaker and musician, Kothmann began ranching and acquired another 640-acre tract of land.

Located on their former homestead, the Kothmann Cemetery is all that remains of the original ranch site. Containing only five graves, all of Kothmann family members, the graveyard began with the burial of Heinrich Conrad Kothmann in 1881. His wife Ilse is buried beside him. Their son Karl, the first of their family born in Texas, is buried here along with his wife Katherine (Hoerster) Kothmann. A fifth unmarked grave is thought to be that of a grandchild.

Though most of the land was sold after Ilse's death in 1905, the family retained one acre including the cemetery property. The concrete wall and slab were constructed after 1937 to provide protection and ease in maintenance for the five graves. The family maintains the cemetery. 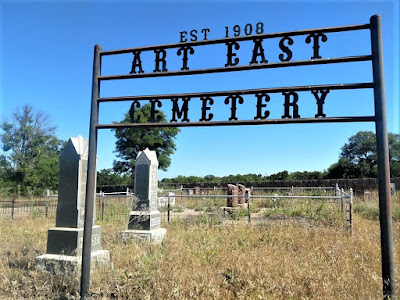 Originally, Art’s name was Plehweville, after Otto Plehwe. In 1886, he had purchased from J.A. Hoerster a one-year-old general store near the hill top Methodist Church. Plehwe thought the area needed a post office as well as a store and the government agreed. Postal officials even went with Plehwe’s suggested name, one the new post master thought had a nice ring to it: Plehweville. Unfortunately, letters to Plehweville, not an easy name to pronounce, spell or remember, often got lost. Many residents were not content with the name and neither was the government.

By 1920, Eli Dechart had taken over as store owner and post master of Plehweville. Like Plehwe, he envisioned a community named in his honor. But unlike Plehwe, Dechart had a more practical idea. He recommended the new name for the post office of Plehweville, Texas be Art, Texas – Art being the last three letters of Dechart. And so by government fiat, Plehweville was transformed into Art. 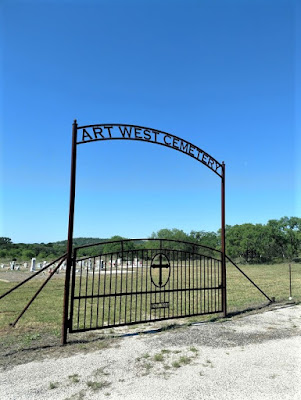 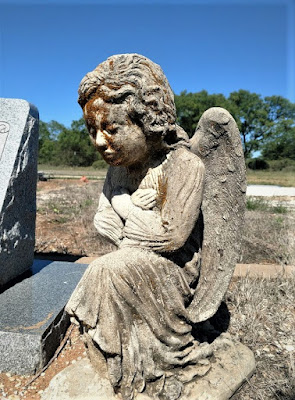 After passing through Mason continuing westbound, I arrived in Grit, Texas for my last geocache of the day. Settled by cotton farmers around 1889. When the time came to open a post office the town wanted to be named after General Frederick Funston, a Spanish American War Hero. Saddened to discover that Funston had already been so honored in Texas, the town settled on the more earthy name of Grit - said to be the texture of the local soil.

The post office opened in 1901, the first store opened around 1903, and the town had its first school building in 1908. The Baptist church met in the Grit school until it built its own building in 1924. Telephone service began around 1914 when the town had 30 people. It remained at 30 until the 1960's when 63 people lived in Grit. This number held into the mid 80's, but it has since declined back to the 1914 level of 30 citizens. The post office has since been discontinued, but Grit remains on state maps.

All that remains is the school building which the town uses for meetings and the Grit Cemetery (GC1JH0Q). One resident to note was that of John B. Berry. Forefathers resisting America's foes on many frontiers inspired John Bate Berry, who came to Texas from Kentucky in 1826. He fought (1835-36) in the Texas War for Independence and in the 1842 Mier Expedition to stop Mexican raids on the Republic of Texas. Captured, imprisoned, then freed in 1844, he scouted for the American army in 1846, during the Mexican War. Later he married, lived in this locality, and fought to make frontiers safe for settlement. 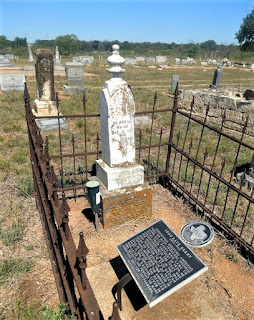 So after stopping at eight cemeteries today, I decided to continue straight on towards Fort Stockton. I still had to go grocery shopping and prepare for the coming work week. From Highway 29, I turned onto US-190 westbound in Menard. From there all the way to I-10 into Fort Stockton.

Just as I let off the accelerator preparing to exit the interstate, KABOOM!! The gas engine in the GeoPrius starts knocking, rattling and loses power. It's still running but I can only go about 10-15 MPH, and that's mostly because of the electric motors. Fortunately the place I'm staying is barely more than a mile from the exit. From the sounds of the engine, I'd say that it spun a rod bearing.

While not happy to have blown up the Prius, I am REALLY THANKFUL that it happened in Fort Stockton and NOT out in the middle of nowhere. Those long stretches of rural highways when I'm 30 miles to the nearest anything and no cell phone service!

Back here, well I make a couple of phone calls and arrange a ride to work in the morning. Overall I had a great weekend between yesterday and today. And finished it off with a BANG!
Posted by Mark at 6:16 PM