On today's 360+ mile drive in my new GeoJeep, I find a swing on a bridge, some old cemeteries, an abandoned ranch house, a missing motel, and much more. There's a lot to see in Texas, so let's get started. 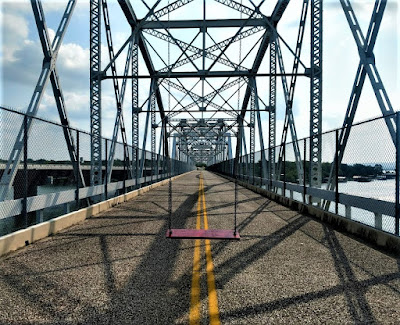 My first stop after leaving Killeen is the Bear Creek Cemetery in Bertram and my first two geocaches (GC7DVVQ, GC442E2). Established in 1865, this cemetery has over 1500 permanent residents here. This one in particular is Texas Ranger Millard S. Moreland who died in 1891 at age 35. 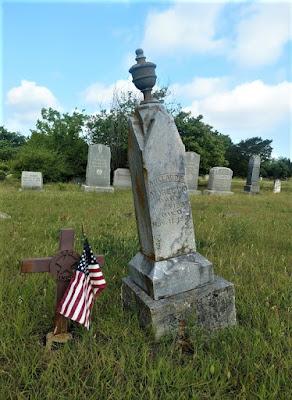 Continuing westbound on Hwy 29, I arrive at the Colorado River and the Old Inks Lake Bridge. Built by the Austin Bridge Company in the mid-1930's, this truss bridge is now a pedestrian bridge after the new bridge was built along side. I parked at the east end to grab that first cache (GCMQ7H) near the entrance.

I started to walk down towards the other geocache on the bridge, but it was almost to the other side. Plus the last few cachers had logged DNF's. Having second thoughts, I was about to turn around back to the GeoJeep. But then I figured I'd walk across and get some good photos from the middle. Well it was a good thing I did. I've been on plenty of old bridges. But this was the first time I ever saw a swing on one! (See the first pick up top.) Now that's what you call a swinging bridge! Took some more pictures, then looked and looked and found the missing geocache (GC52MVG). 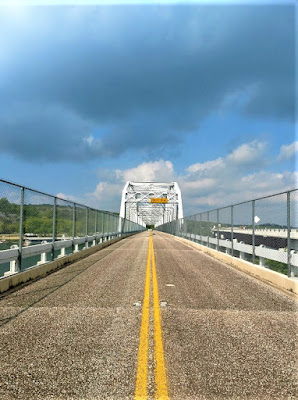 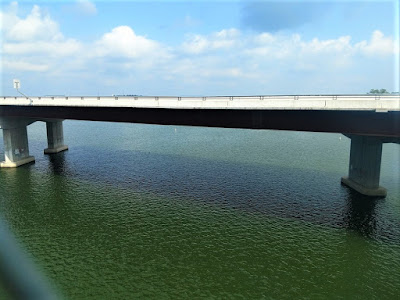 Moving along down the road, I exit from Hwy 29 onto US-377 in the community of Grit, Texas. A few miles down from there I stopped for a quick roadside geocache called Weird Rock Ranch (GCZMJT).

A couple of miles later there was another roadside geocache for a Texas ghost town called Streeter (GC11953). The first settlers were Irish (1855) and within a few years they were joined by German immigrants. Settlement was first along Big and Little creeks and Honey Creek and the town was first known as either Bluff Creek Community or Honey Creek Community.

In September, 1890, a post office was established and the submitted name was Streeter after early settler Samuel T, Streeter. In 1870 a Baptist church formed and the town had a cotton gin and a flour mill. There had been a school, earlier, on Honey Creek, but Streeter didn't have a school of their own until 1900. Streeter was quarantined for smallpox in 1903 and telephone service began in 1917. The post office closed its doors in 1970. The population of Streeter which had been reported as 100 people from 1925 dropped to only 60 by 1964. Streeter has since rebounded to about 100 people.

Nothing to see except the old house near the cache which was buried deep in the trees and overgrown brush. Supposed to be a cemetery there too but not exactly sure where.

I did find Gamel Cemetery to the southwest. There wasn't a geocache hidden there and unfortunately all of my geocache supplies were back in the GeoPrius in Fort Stockton. But I did look around a little bit at the headstones and hiding places. I'll talk a little more about this cemetery when I return to hide a geocache soon. 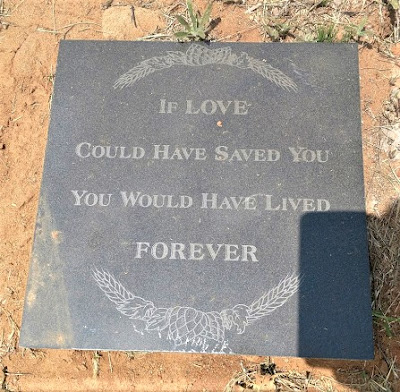 Continuing southwest on US-377 towards I-10, I got off the main road to get to my next geocache. On the corner was this old abandoned house engulfed by nature. It would have been cool to go in and explore, but being on private property that's not such a good idea. 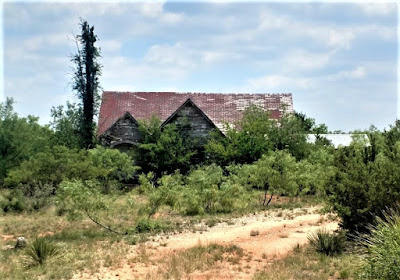 Three young men who made the supreme sacrifice for their country repose here in final rest. Thomas St. Clair lost his life in World War I in Europe; a memorial stone in tribute to Lloyd G. Ivy was placed here following his courageous death in World War II; and John Wilbur Gentry (World War II) rests here. The latter's brother, Lawrence Gentry, lost his life while serving as a military mechanic during the second World conflict. At least eleven veterans of the Civil War - one who served the Union Army and ten who fought for the Confederate cause - are among early settlers buried in Red Creek cemetery. 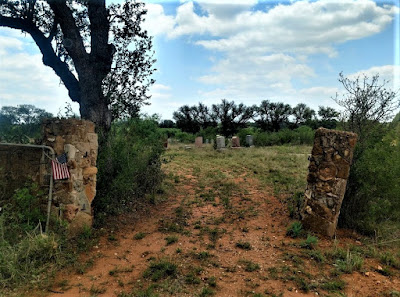 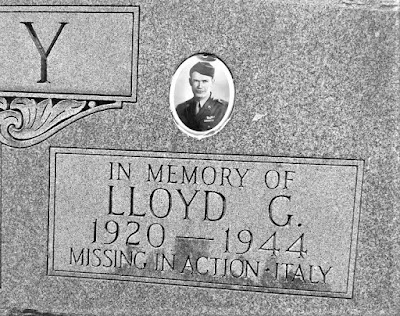 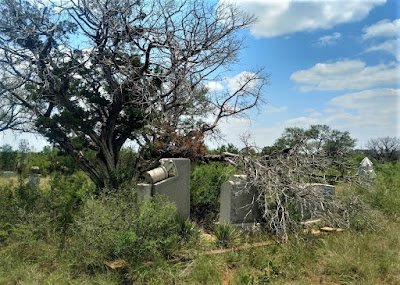 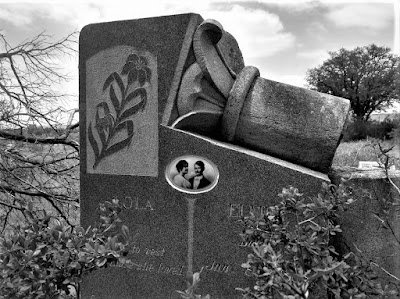 Continuing south on Ranch Road 385 for a couple of miles, I arrived at my next geocache at the ghost town of Yates, Texas (GC1M4K5). Yates, also known as Yates Crossing, is twelve miles northeast of Junction in eastern Kimble County. It was named by Joseph A. Yates, who opened a post office in June 1907 on his land near a ford of the Llano River on the road from London to Fredericksburg.

Camp meetings were held by early settlers under the live oaks near Yates. Tully J. Lange became Yates's second and final postmaster in June 1909. By the 1920's Yates was the center of a farming community in the Llano River valley. Throughout the decade Yates had a post office, a general store, a gas station, and a population that reached at least fifty-one. The area was advertised as a vacation spot for tourists and campers.

The post office closed in March 1930, and though Yates continues to be shown on maps, its last reported population was ten in 1958. Aside from a few scattered houses, the only thing business related that I saw was this old Kimble Motel sign. 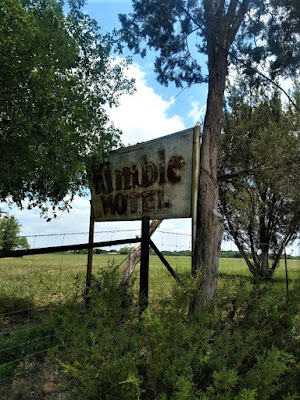 Through Yates on this same spot on the Llano River is the Old Beef Trail Crossing. This Llano River crossing became a main line of the Spring cattle drives from 1867 to the 1880's. Capt C. A. Schreiner and his partners herded cattle on their way to Abilene and Dodge City on the Western Trail; many area cowboys rode with them. Preceded by a trail boss and chuck wagon, as many as 2,000 cattle per herd took half a day to cross. With the air full of dust, local ranchers sat on their own horses watching their own cattle closely to ensure that none of their own herd joined the trail drive. This site later became a vehicle crossing. 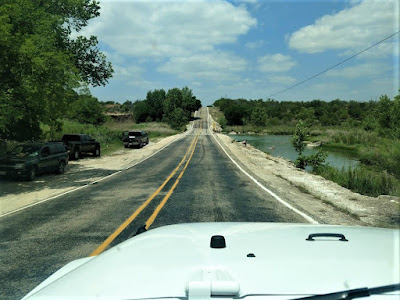 Back on US-377 south, I caught this old truck parked by this broken windmill and had to turn around for a photo. 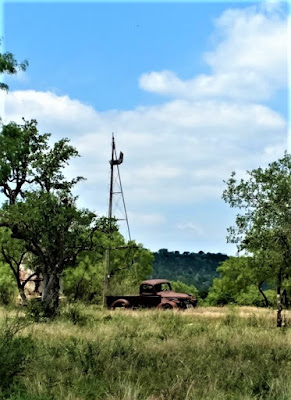 Just down the road was my next roadside geocache near a historical marker (GC1M4J3). Teacup Mountain was named for its peculiar formation. Probably used as a lookout post by both whites and Indians in pioneer days. Near here occurred the Indian killing of pioneer James Bradbury Sr., 1872; and the capture of a wanted man by Lt N.O. Reynolds and four fellow Texas Rangers in 1878. 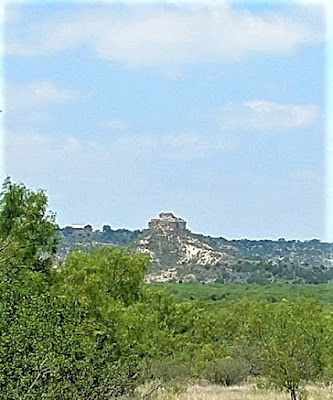 Named for the soaring Teacup “Mountain” to the west of the site, not much is known of this community other than there were 10 inhabitants at one time and they were served by a single store. The post office “may” have been located in the general store according to The Handbook of Texas. 1947 was the last year anyone bothered to count the number of residents and now there’s no one left to ask.

My last geocache of this trip was at Gentry Creek Cemetery (GC1M4HX). Raleigh Gentry was one of the first settlers in Kimble County, coming to the county in the early 1850's, when he settled on Bear Creek, some five miles with its junction with the North Llano. Here he built a home, erected stables, corrals, outhouses, cleared land and had an ideal paradise from a material standpoint. He prospered, farmed enough land to produce grain for use of his family and his stock, raised cattle, and enough hogs for his family use. In the early 1860's the war clouds gathered and became darker and darker, and finally the able bodied men had to go to war or join the frontier defense. Raleigh Gentry had six stalwart sons; Alan, Lee, Guliford, William, George, and Jack. 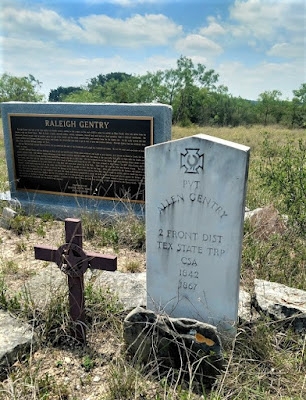 His son William married Nancy Frazier, but he answered the call of the Southland and joined the Confederate forces. He left his wife and son John at home, never to return.

In 1862, Raleigh Gentry sold his holdings on Bear Creek and moved some fifteen miles northeast and made a new location, now known as Gentry Creek, but here trouble awaited them. The Indians taking advantage of the lonely situation and the further fact that many of the men folks had gone to fight with the South made repeated raids on Gentry Creek, stealing horses and killing anyone that got in their way. On one occasion, two of the Gentry boys were hunting horses about a mile from home, when they saw the horse herd surrounded by a band of Indians and being driven off. The boys escaped to their home.

In 1867 Allen Gentry and his brother, Lee, went northeast to the Little Saline on a hog hunt and were soon joined by Felix Hale. Their hunt led over the line into Mason County. The part divided, Allen Gentry took one side of the creek, and Felix Hale and Lee another side in their hunt for the hogs. Allen was attacked by the Indians and killed in the very sight of his brother, Lee, who wanted to rush to the defense of his brother but he was told by Felix that it would be suicide and he would lose his own life. Hale and Lee dashed to the first neighbors' and gave the alarm, and parties organized to rescue the body of Allen Gentry and also to pursue the Indians. The body was found and placed on a blanket, and the four corners tied to a long green pole, and in this was the frontiersmen formed a hearse and conveyed the body to the residence of Matthew A. Doyle, the nearest neighbor, a distance of four miles. Here the body was placed in a hack and carried to the Gentry Creek. The body was buried in what developed into the Gentry Creek Cemetery. 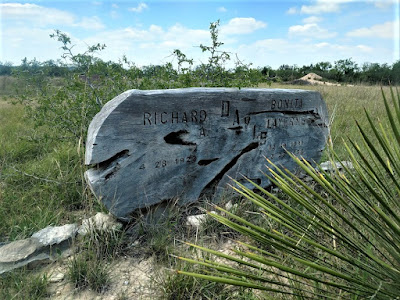 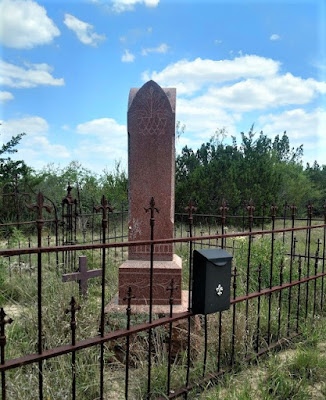 Another buried here and worth mentioning is Dan C, Bird, grandson of George C. Kimble, an Alamo hero for whom Kimble County is named. Bird's son, Jack, passed away in California in 1981, and according to his wishes, Jack's cremated remains were scattered above Teacup Mountain that looms in the distance from Gentry Creek Cemetery.

That was it for today. Drove onto I-10 at Junction all the way to Fort Stockton. Thanks for stopping by and we'll see you next week for another tour of Texas.
Posted by Mark at 9:35 AM