On this weeks long drive from Killeen to Fort Stockton, I spent most of the day exploring and geocaching in the historic town of Mason, Texas. 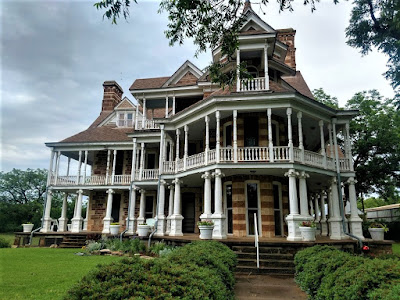 One of the first settlers in the area was William. S. Gamel in 1846. Fort Mason was established in 1851 and settlers were attracted by the protection that the fort provided from Indians. Germans moved into the area from Fredericksburg and even soldiers settled the town after their discharge. In 1858 the town received mail as well as the fort's supplies from San Antonio. The post office opened in town and the name was changed from Fort Mason to Mason that same year.

In the 1870's Mason County was the scene of a violent feud between German settlers and Anglo ranchers. Known as the "Hoo-Doo" War or the Mason County War - it was a nasty business of many killings with no one ever standing trial.

Mason became a stage stop after the war and it never did get a railroad - usually a very important milestone to a developing town. In 1923 Mason was the largest "city" in Texas without a railroad.

My first stop and geocache was at the Gooch Cemetery (GC1NVFD). There are over 2600 burials in the Old and New sections combined. I couldn't find any information on Benjamin Gooch other than he was born in 1790 in North Carolina. The inscription on his headstone reads: "Christian Patriot, Pioneer in Texas, Under Four Flags, 1834-1872." I can only assume that he was the initial donor of land used for the cemetery. 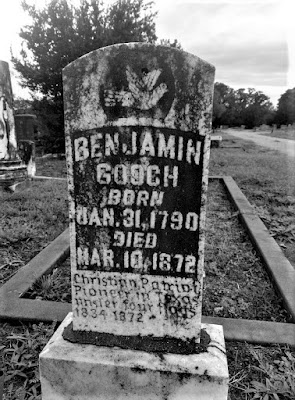 One burial of interest is that of Adolph Korn. Eleven-year-old Adolph Korn was tending sheep on New Year’s Day, 1870, when three Apache warriors came up to him on horseback. One of the warriors grabbed Adolph, hit him over the head with a gun barrel, pulled him onto his horse, and rode away. That was the last his family saw of him until three years later, when a band of Comanches, who had received the boy in a trade with his abductors, surrendered him to government authorities November 14, 1872, at Fort Sill, Indian Territory (Oklahoma). 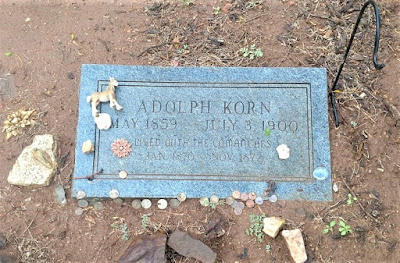 He lived with the Comanches for only a few years but was "Indianized" by the experience. After being returned to his family, Adolph never again became completely comfortable with "white" civilization. He withdrew from his family and the community and lived in a cave for a number of years. His last years were spent with his sister Johanna spending most of his time outside, eating raw meat, sleeping outdoors, and avoiding contact with people.

And then there's Private Walton Tart. With the inscription of Texas PVT 636 TD BN and died December 12, 1944 at age 24, I can only assume he was killed in action though I could not find any additional information to verify that. 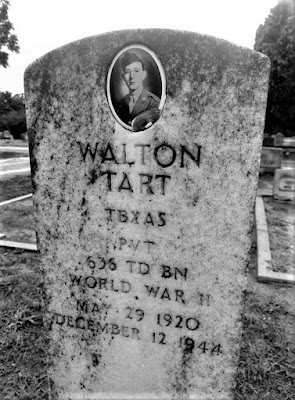 The next geocache brought me to the Seaquist Home and the Broad Street Bridge (GC1NVFK). Construction began on the Seaquist Home in 1887 by the Rev. Thomas Broad. In 1891, Banker E. M. Reynolds acquired and enlarged the house. The architect, Richard E. Grosse, also did the ornate stone cutting and woodcarving. Property was then sold to Oscar E. Seaquist in 1919, a Swedish immigrant, who finished the ornate house. This beautiful landmark still owned and occupied by his family. Exemplifying fine workmanship and materials, the house features a third-floor ballroom. 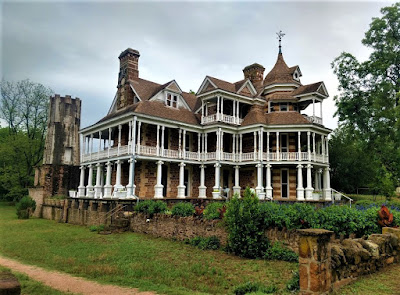 On the same street at the north corner of the property is the Broad Street Bridge. In 1914, the citizens of Mason petitioned the county commissioners court for a reliable means of crossing Comanche Creek, which separated north and south Mason. Initial construction bids were deemed too high and a second petition was presented in 1917. Because Mason had no railroad to transport large pre-fabricated building materials, the Alamo Construction Company crafted the bridge of reinforced concrete on site in 1918. Perhaps the last concrete truss bridge to remain in Texas, the Broad Street Bridge continued to support vehicular and pedestrian traffic in Mason until recently when bollards were installed to block cars from crossing. 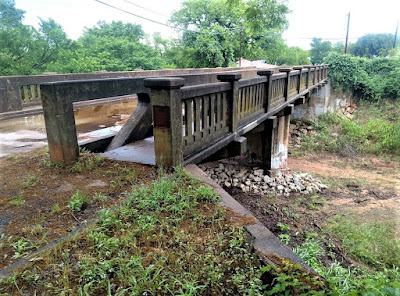 Next up is a statue outside the Mason Library honoring its hometown author Fred Gibson (GC1195B). If you're as old as I am, you probably remember reading or watching the movie "Old Yeller" in grade school. The author Fred Gibson was born here in Mason, Texas. 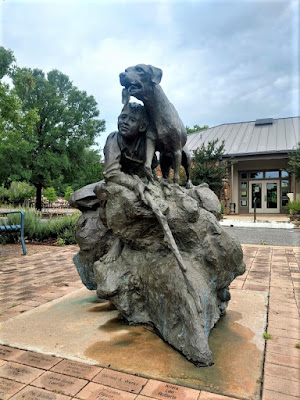 Making my way back to the town square, I stop at the Mason County Jail. A good example of a small, nineteenth-century jail, this structure was built in 1894 from the brown sandstone available in the nearby hills. The ground floor of the county's third jail includes living quarters for the sheriff, while the jail cells are located on the second floor. The modified Romanesque revival building features a massive entry arch, segmental arches over the windows, and a central tower. 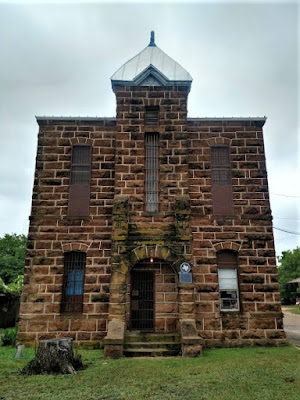 My next geocache was at the Old Mason Grammar School (GC13165). Located near Gamel Springs on the grounds of Fort Mason and constructed in 1887. Builder August Brockmann used stones from the former Fort, which were originally quarried on this hill. The school served Mason until 1952, with curriculum including music and German. In the 1960's, the building was used as a library, museum, and youth center. Now it is just the museum and senior center. 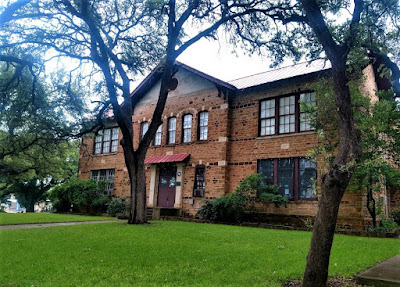 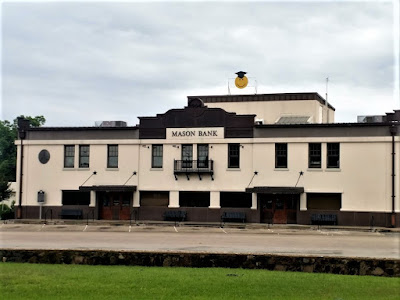 Sitting proud in the center of the square is the Mason County Courthouse. Constructed in 1909, this is the third courthouse to serve the people of Mason County. Commissioners Court probably met in other locations until the first courthouse was built in 1872. It burned in 1877 and was replaced that year by a second red sandstone building. That one caught fire in 1900. Designed by E. C. Hosford, this Beaux Arts style third courthouse features a center dome and clock tower, gable front porticoes, with two story Doric columns and rusticated stonework with contrasting stone lintels. 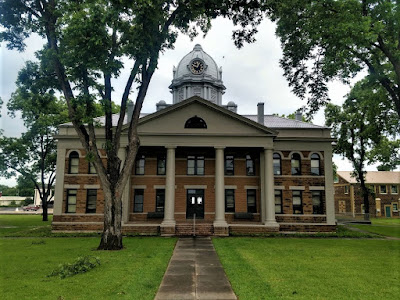 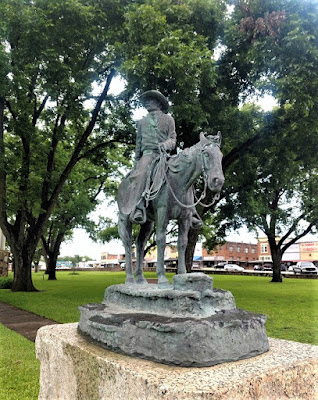 Now off to visit the towns namesake. Fort Mason (GC181Q3) is situated near a spring long used by Indians; built of stone quarried from post hill. The Fort helped protect Texas frontier from Indians. Colonel Robert E. Lee, stationed in Texas 2 years, commanded Fort Mason from February 1860 to February 1861. Here he made his decision as to his part in the Civil War, saying: "If the Union is dissolved,... I shall return to my native state and... save in defense... draw my sword on none". He left Fort Mason February 13, 1861. In wartime he remembered "the enemy never sees the backs of Texans".

The fort was abandoned in 1969. The native stone buildings, which once numbered 25 were spirited away (stone by stone) to reappear in town, transformed into residences. In the mid 1970's the pattern was reversed when local citizens rebuilt a former officer’s quarters from the well-used rock. 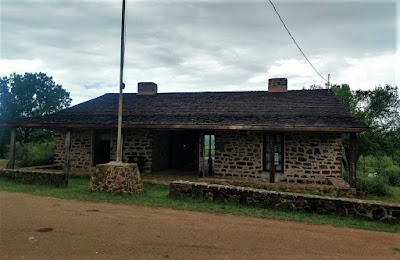 On my way out of town, I stopped at the Crosby Cemetery and my next geocache (GC1NVFP). The first burial ground for the citizens of Mason and Koocksville, this cemetery traces its history to the 1850's. The oldest documented burial is that of Kate Lemburg, who died in 1856. Also interred here is Mason County's first sheriff, Thomas Milligan (1810-1860). The Crosby family purchased the property surrounding the cemetery in 1866, and it has been known as Crosby Cemetery since that time. Those buried in the cemetery include members of the Crosby and other pioneer families. It stands as a reflection of the area's heritage. 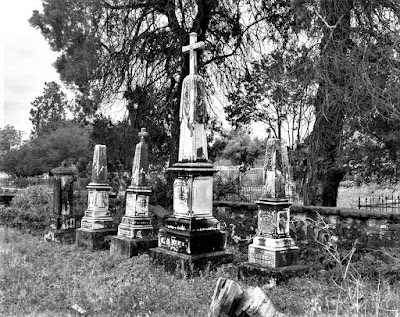 My last geocache of the day was on the outskirts of Mason in what used to be the town of Koocksville (GC1195E). The towns namesake(s) were William and Minna Koock who opened a store in their log house just after the Civil War. Due to its proximity to Mason, the Koocks never saw the need to apply for a post office. Koock's store became a stop for cattle buyers from more western counties.

The log store/ residence was rebuilt as a large stone structure in 1883. The building's second floor served as a community center and a place to hold civic meetings. The town thrived after the Civil War and the new prosperity made Koock a banker as well as a storekeeper. Koock later built a large flour mill and gin on his property but it was torn down and the stone cannibalized to build the VFD building in Mason. Koockvsille did have its own school at one point.

A decline in cattle and sheep prices sent the town into a slump, but when William Koock was killed in a riding accident (1890) his family moved into Mason and eventually sold the businesses (1899). Without the driving force of William Koock, the town would've become a ghost, but it's nearness to Mason has caused it to evolve into part of that city. 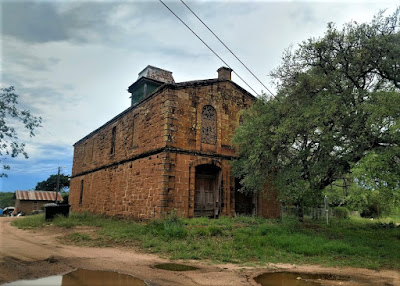 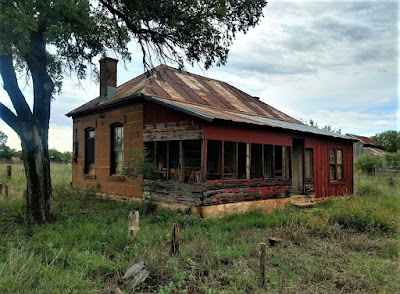 While driving the rural backroads of Texas, you never know what you're gonna see. 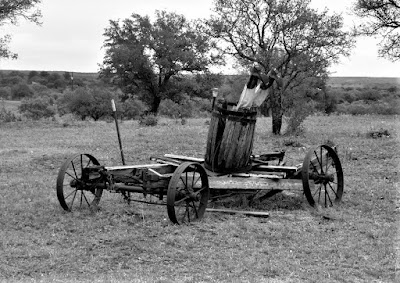 Just one more stop to make. Last week I mentioned stopping by Gamel Cemetery. I also mentioned William Gamel at the start of this blog as one of the earliest settlers in Mason County, moving here from Georgia. This land was a part of his homestead and you'll find his grave among those here. The oldest known burial is from 1883.

You have to cross this creek to get to the cemetery. Last week it was dry. This week there was a little bit of water there. I did manage to hide a cache there too (GC7Q19Q). 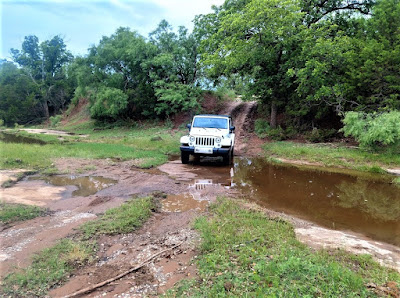 That's it for this week. The rest of the drive was straight through to Fort Stockton and getting ready for work tomorrow. Thanks for stopping by.
Posted by Mark at 5:13 PM